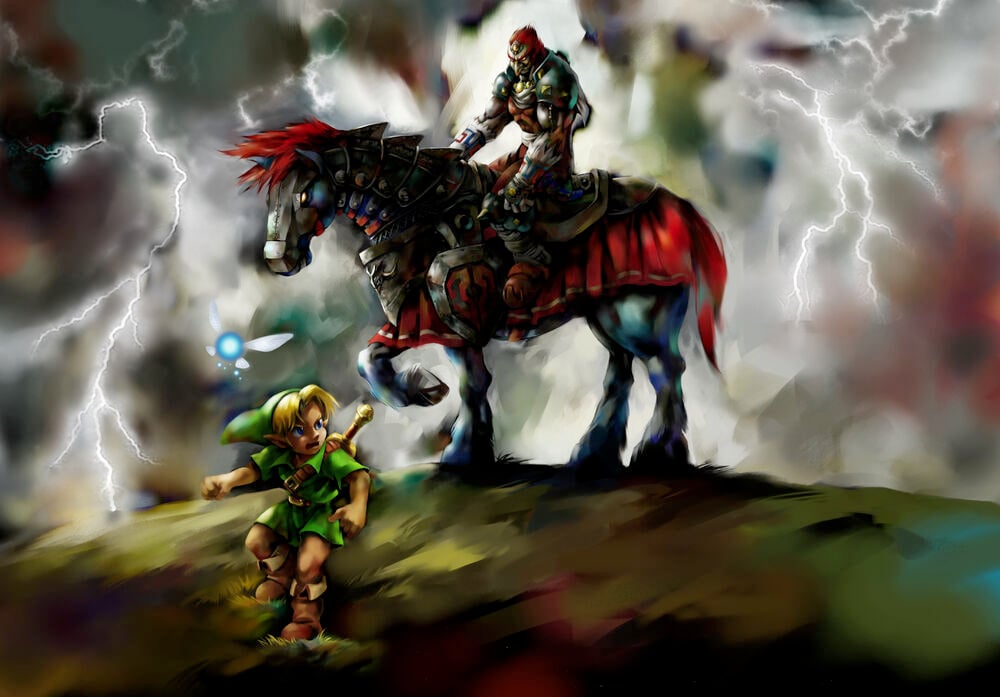 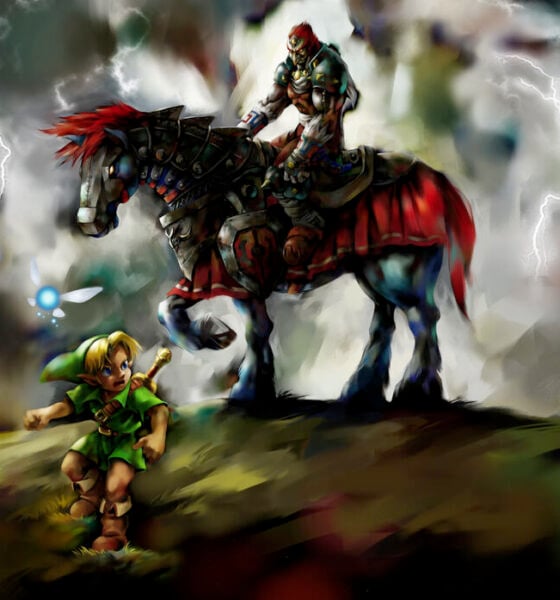 Ganon has always been one of Nintendo’s most iconic villains but The Legend of Zelda: Ocarina of Time made him a villain worth defeating.

Ganon has always been one of Nintendo’s most iconic villains, but there’s something to be said for how Ocarina of Time reinterpreted the Prince of Darkness. Ganon as he was before OoT was your standard video game antagonist of the era, more beast than man (a trait conveyed in his pig-like design). He existed mainly to contextualize some stakes, kidnap a princess or two, and serve as the final boss. Basically another breed of Bowser. Bringing The Legend of Zelda back to its then-origins, Ocarina of Time took an opportunity to formally introduce Ganondorf — Ganon’s original human form only briefly mentioned in A Link to the Past. Where Ganon was a beast with little personality outside his lust for power, Ganondorf was something far more nefarious: ambitious.

“What kind of guy is worth defeating? . . . The enemies you feel best about defeating are the ones that outclass you in every way, from abilities to experience . . . [Ganondorf] originally looked like a brute who had nothing but raw strength. I wanted him to have clever eyes so you knew he was a man of high caliber . . . In the end we arrived at a design that made him look not only more intelligent but also, at the same time, like the epitome of an evil ruler.”
(The Legend of Zelda: Arts & Artifacts 413).

All of this characterization inherent to Ganondorf’s redesign can be felt in Ocarina’s story. He does outclass you, in abilities and experience. The story opens with Ganondorf killing young Link in a prophetic dream, immediately setting him up as superior. He is more than a brute. Takizawa depicting Ganondorf as an intelligent man makes sense given his in-game actions. He pledges allegiance to the King of Hyrule all while plotting a coup in silence. He pays close attention to Link and Zelda after he catches them spying on him, which helps him sneak into the Sacred Realm moments after you open it. He keeps active tabs on Link following the time skip and allows him to awaken the Sages because he knows Zelda will eventually reveal herself. Villains who behave in smart ways naturally raise the stakes.

The story posits Ganondorf as a genuine foil to Link. Both are anomalies within their cultures. As the only Gerudo male, Ganondorf rules as their king and is worshiped as an all-powerful thief who commands respect. As the only Kokiri without a Fairy, Link is othered by his peers and lives a lonely life with few friends. Neither one was raised by their birth parents. Ganondorf was trained by his surrogate mothers, Koume and Kotake, while Link was an orphan brought up by the Great Deku Tree. Link first recognizes Ganondorf as a threat through a dream while Ganondorf first recognizes Link as a threat through a window. Where Link is proactive — tracking down the Spiritual Stones, awakening the sages, rescuing Zelda — Ganondorf is reactive — watching from a distance, making risky plays only when it’s safe. Link is defined by undying courage, whereas Ganondorf by his overwhelming power.

Power itself is an important element of Ganondorf’s character beyond his ownership of the Triforce of Power. He’s motivated by a desire for more power. It’s not enough to be King of the Gerudo, Ganondorf wants to rule over all Hyrule. He’s politically powerful. Even before taking over the kingdom, Ganondorf has the largest seen army in the game. His forces take Hyrule Castle and slaughter the Hylian Knights, as evidenced by their en masse absence post-time-skip. He’s physically powerful. Killing Ganondorf simply isn’t an option. The most Link and Zelda can do is temporarily seal him until his inevitable return.

Ganondorf also benefits from being an active participant in the plot who interacts with the player several times. Link has six major confrontations with him over the course of the story. The first is in the dream which opens the game. The second is when Ganondorf catches Link and Zelda spying on him through the courtyard window. The third is their encounter outside the Castle Town gates before the time-skip. The fourth is at the Forest Temple by proxy of Phantom Ganon, the fifth when he kidnaps Zelda, and the sixth is their final battle which closes out the game. Each interaction helps forge a rivalry that keeps building over the course of the story.

“Link’s archenemy is Ganon, so I thought they should meet once when he’s a child . . . When Adult Link meets him again, and Ganon says he’s that boy from years before, it really hits you.”
– Shigeru Miyamoto, Producer

There’s an arc to Link and Ganon’s dynamic. Ganondorf initially approaches Link with bemusement and slight admiration. “So, you think you can protect them from me… You’ve got guts, kid. / Heh heh heh… You want a piece of me?! Very funny! I like your attitude!” That admiration starts turning into respect after Link defeats Phantom Ganon, “Hey, kid, you did quite well… It looks like you may be gaining some slight skill…”, which Ganondorf acknowledges only to backtrack on once Link awakens all the Sages and threatens his reign, “My only mistake was to slightly underestimate the power of this kid… No… it was not the kid’s power I misjudged, it was the power of the Triforce of Courage!” Even faced with a worthy challenger, Ganon’s ego is so inflated that he still underestimates Link. His arrogance just makes you want to prove yourself.

Ganondorf in Ocarina of Time is still untested. He has not fought a Link yet, has never tried to conquer Hyrule, and is at the very start of his tyranny. While he recognizes Link as enough of a threat to keep tabs on him, he never truly believes he’ll lose. Which makes sense because he fundamentally wins when all is said and done. Aside from maintaining the full Triforce at the end of OoT, Ganondorf accomplishes everything he sets out to do. He razes Hyrule Castle to the ground, successfully subjugates all the races, and rules the kingdom for seven years. Link and Zelda save the day, but the damage is done. Which is another important element: you feel and see the consequences of Ganondorf’s victory in the gameplay.

Market Town’s destruction removes several characters from the world and replaces an entire town with a wasteland full of Redeads. Kakariko Village is consequently overcrowded with refugees and the graveyard overrun with ghosts. The Kokiri live in fear of the monsters mere steps outside their homes. Zora’s Domain is frozen over and all but two Zora NPCs disappear, the rest trapped under the ice. Gorons tremble in fear inside of Fire Temple cells, the implication being that many have already been eaten by Volvagia. Stalchildren grow up into Stalfos and migrate into Temples while Poes take their place in the overworld. Ganondorf takes the childlike fantasy that encapsulated Hyrule in Ocarina’s first half and warps it into a lonely, borderline apocalyptic kingdom.

Gaming is an interactive medium. You are Link as far as the story is concerned, so it’s important that Ganondorf comes off as an actual threat you want to stop. The final battle is a great example of using gameplay to convey power. Ganondorf is so powerful in his first phase that Navi can’t even lock onto him unless he’s stunned. Ganon outright disarms Link of the Master Sword at the start of the second phase, depriving you of his only weakness and forcing you to start the fight at a major disadvantage. Before Link and Zelda can claim their narrative victory, you have to mechanically earn it.

Being able to perceive and then confront Ganon’s victory over Hyrule through the actual gameplay makes the stakes feel all the more real. It’s cathartic when Ganondorf finally curses the Hero of Time’s name after his defeat, “CURSE YOU… ZELDA! CURSE YOU… SAGES!! CURSE YOU… LINK!” Even more so if you named Link after yourself. Ganondorf goes from seeing you as an amusing challenger to a rival worth damning for all eternity. He may not be dead, but his pride will never heal.

It’s admirable how Ocarina of Time recontextualizes the dynamic between Link and Ganon into a foundational piece of The Legend of Zelda’s history. Their connection was tenuous at best in the first Zelda and A Link to the Past, but it now has weight. A legitimate rivalry forms between the two that gives all their battles — retroactive or successive — greater meaning. Ganondorf makes Ganon into more than just a generic evil beast. He’s still a bonafide villain at the end of the day, but he carries himself with a theatrical gravitas that makes his presence felt. He’s power personified, outmaneuvers you at just about every turn, and shows you firsthand the atrocities a single man can commit.

Just as importantly, Ganondorf served as a jumping off point to give the villain real depth. Ocarina of Time’s script director Toru Osawa envisioned Ganondorf as someone who was “supposed to be a more good man” compared to Ganon, and who had sympathetic qualities. While this didn’t translate into Ocarina’s final story, it does apply to Ganondorf’s next appearance in The Wind Waker. Set centuries after Ocarina, Ganondorf in The Wind Waker has been humbled by his imprisonment. He’s still ambitious and hungry to conquer Hyrule, but introspective and wiser in his old age. You can see the “good” Osawa was alluding to in spite of Ganondorf still being villainous,

“My country lay within a vast desert. When the sun rose into the sky, a burning wind punished my lands, searing the world. And when the moon climbed into the dark of night, a frigid gale pierced our homes. No matter when it came, the wind carried the same thing… Death. But the winds that blew across the green fields of Hyrule brought something other than suffering and ruin. I coveted that wind, I suppose.”

Yet even without the extra depth The Wind Waker offers him, Ganondorf is plenty compelling in Ocarina of Time. Not because his character is layered or particularly nuanced, but because the story treats his power with respect and frames him as a cunning threat. Because the plot makes an effort to foster a connection between your avatar and the antagonist. The best video game villains change the status quo, remind you they’re your end goal, and present a legitimate challenge that builds up to the grand finale. You love to hate them as much as you want to beat them. Through Ganondorf, The Legend of Zelda: Ocarina of Time made Ganon a villain worth defeating.