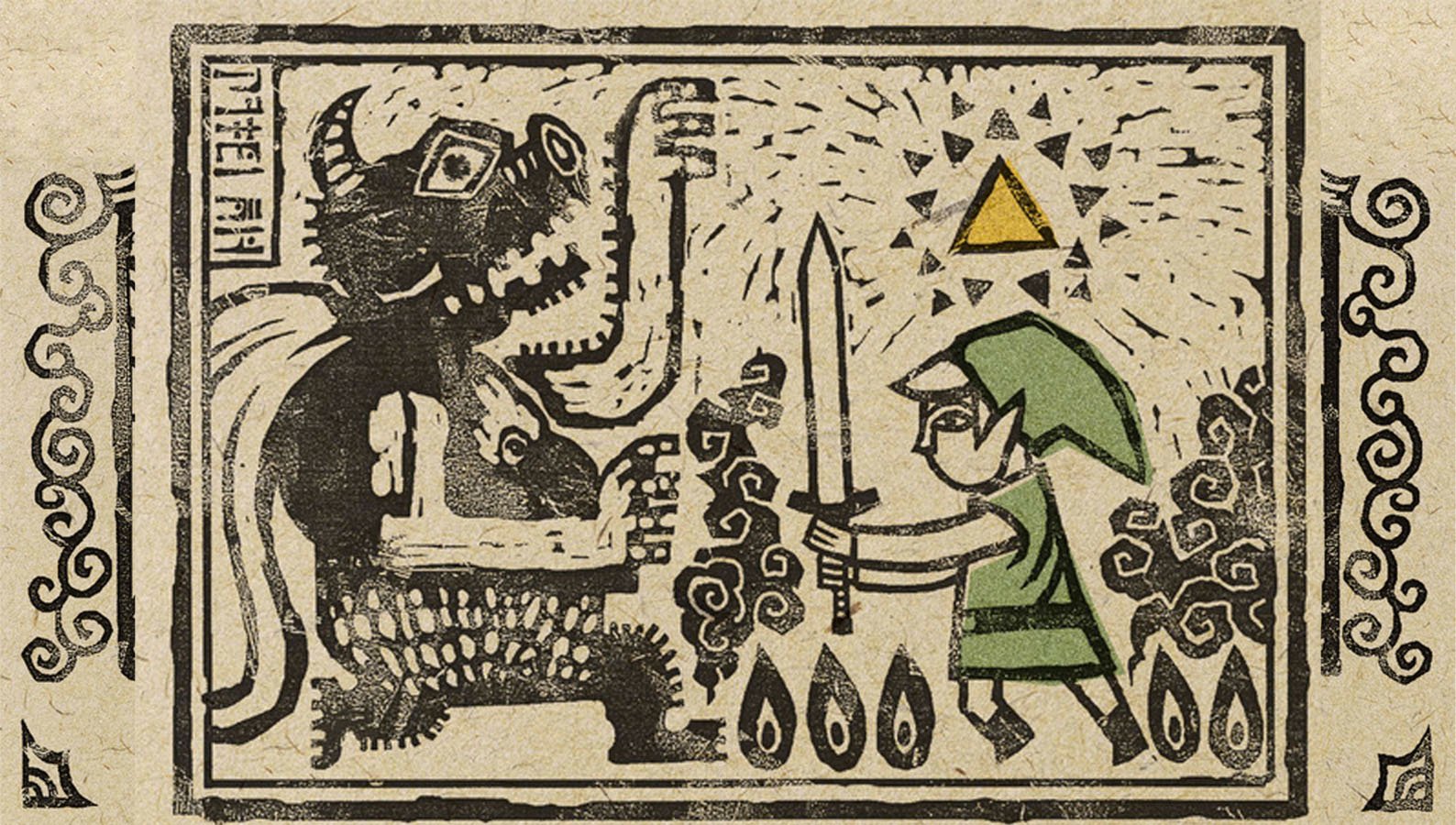 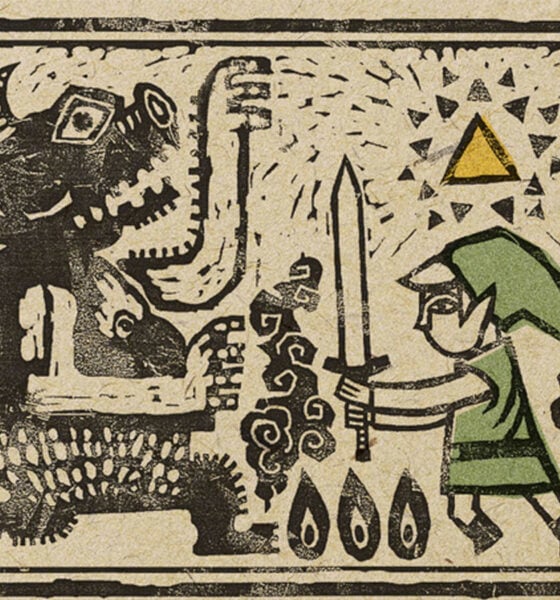 “My country lay within a vast desert. When the sun rose into the sky, a burning wind punished my lands, searing the world. And when the moon climbed into the dark of night, a frigid gale pierced our homes. No matter when it came, the wind carried the same thing… Death. But the winds that blew across the green fields of Hyrule brought something other than suffering and ruin. I coveted that wind, I suppose.”
– Ganondorf, The Legend of Zelda: The Wind Waker

Ganondorf’s depiction in The Wind Waker marked a radical departure for the character. Ganon was more a conceptual evil in the original Legend of Zelda and A Link to the Past, only gaining deeper characterization in Ocarina of Time with the formal introduction of Ganondorf. Even then, he only had depth in the sense that he was explicitly politically-driven and managed to develop an organic rivalry with Link over the course of the story. Ocarina’s Ganondorf is an otherwise fairly traditional villain when all is said and done. He’s pure evil, with no redeeming qualities. You love to hate him for his bravado and sheer arrogance bordering on confidence. He’s a good villain who you actually want to defeat, but he’s missing that third dimension all the best antagonists have. The Wind Waker’s portrayal of Ganondorf is considerably more nuanced.

Ganondorf in The Wind Waker is a character who has already tasted defeat. He is centuries older than he was in Ocarina of Time, and suspiciously humbled in the way he carries himself. He’s nowhere as outwardly antagonist as he was in Ocarina, carrying himself in an almost regal manner. Your once-haughty rival has turned into a wise old man who’s had a lifetime to reflect on his own failures. There are times where he even comes off sympathetic. His grievances regarding Hyrule’s Fate are valid and he’s not necessarily wrong when he condemns the Goddesses for essentially choosing to spite him at the cost of the whole kingdom.

“I can see this girl’s dreams… Oceans… Oceans… Oceans… Oceans… Oceans as far as the eye can see. They are vast seas… None can swim across them… They yield no fish to catch… What did the King of Hyrule say?… That the gods sealed Hyrule away? And they left behind people who would one day awaken Hyrule? How ridiculous… So many pathetic creatures, scattered across a handful of islands, drifting on this sea like fallen leaves on a forgotten pool… What can they possibly hope to achieve? Don’t you see? All of you… Your gods destroyed you!”

The potential of his reign was so bad, divine beings deemed it better to flood the entire kingdom and wash it away from the annals of history than let Ganon rule. Ganondorf spent the better part of his life facing the same philosophical question: was the prospect of apocalypse really better than letting him have Hyrule? It’s compelling that he comes out the other end calmer, collected, and more mature. Wanting to bring back Hyrule is in itself an inherently noble ambition, but Ganondorf’s end goal is still to conquer Hyrule for himself. He doesn’t want the kingdom to come back for the good of the people. It’s for the good of himself. The fundamental difference between Ganondorf in The Wind Waker and the rest of the series is that only The Wind Waker gives him the self-awareness to reflect on his own actions and villainy — all without betraying the integrity of his original characterization.

Ganondorf as depicted in The Wind Waker is a humbled hypocrite. His “coveted wind” speech is a powerful monologue, but we already saw what a Ganon-led Hyrule looked like in Ocarina of Time and it was a waking nightmare. The Kokiri, Goron, and Zora are all the victims of attempted genocide — the Kokiri have their land invaded, the Goron are fed to a dragon, and the Zora are sealed frozen under their own water. Every inch of Castle Town is razed to the ground, the Hylian Army thoroughly defeated and the market overrun with Redeads. What few refugees remain have no choice but to relocate to Kakariko, which is now overcrowded with people. The Gerudo never even leave their desert, which was apparently Ganon’s motivation all along. Only Ganondorf gets the actual privilege of his “coveted wind.” The Wind Waker’s prologue goes so far as to describe Ganon’s second coming as an “onslaught of evil.” The way he reflects on the past does not line up with what happened.

Even his behavior in The Wind Waker is hypocritical in nature. On the surface level, Ganon is more merciful than he ever was in Ocarina of Time. Ganondorf kidnaps girls from across the Great Sea in pursuit of Zelda, but does not have them killed when they don’t bear the Triforce of Wisdom. He doesn’t kill Link or Zelda during the final battle either, even though he has multiple opportunities to do so, outright sparing Link and knocking Zelda out instead of simply cutting her down.

“Do not fear. I will not kill you… I merely have need of the power that dwells within you.”

At the same time, he was ready to slice down Link during their confrontation at Forsaken Fortress and commanded the Helmaroc King to throw him into the sea at the start of the game — which would have drowned Link if not for the King of Red Lions’ intervention. Ganondorf is a walking contradiction, but great villains aren’t wholly predictable and neither are people. Hypocrisy makes for a realer character. Ganon chooses the actions and ideologies that best suit him in the moment. Yet the fact he shows consistent restraint at all indicates that something has changed within him, if only in regards to killing.

Ganondorf’s newfound maturity is also conveyed in his relationship with Link. In Ocarina of Time, he was your rival and each interaction built up an increasingly antagonistic dynamic. Ganondorf goes from not even registering the Hero of Time as a threat, to wanting to test his abilities through Phantom Ganon, and desperately trying to kill him by the final battle. Ganondorf in The Wind Waker doesn’t show nearly as much animosity towards to Hero of Winds or Tetra. Rather than keeping Tetra crystallized like Zelda before her, he lets her sleep peacefully inside his tower on a comfortable bed. Link’s not even on his mind when he dies. Compare Ganondorf’s vengeful “YOU… CURSE YOU ZELDA!… CURSE YOU SAGES!!… CURSE YOU LINK!” in Ocarina of Time, to the The Wind Waker’s poignant, “The wind… it is… blowing…” Rather than damn you, he takes a moment to feel the wind he covets. Ganondorf is no longer defined by just hatred.

It’s easy to take Ganondorf at face value, which is why King Daphnes is positioned as Ganon’s foil within the story instead of Link. Daphnes is The Wind Waker’s way of reminding you that Ganondorf is still in the wrong despite his more sympathetic portrayal. Ganondorf and the Kind of Red Lions are two sides of the same Rupee. Both want Hyrule’s return, but under their own rule, seeking nothing but a return to each’s preferred status quo. What they see as restoring their lost kingdom would really mean the dissolution of Link and Tetra’s future. Hyrule’s culture and history have already been lost to time. The world has moved on, formed new cultures, and forged ahead in its absence. It’s a sad sentiment, but it’s not a bad thing.

Life does not allow you the luxury of going back, you can only push forward and make the most of what you have. Thematically, this ties The Wind Waker’s story to Ocarina of Time and Majora’s Mask. Daphnes and Ganondorf are chasing dead dreams, ghosts of the past. Whether or not the gods made the right decision in flooding Hyrule doesn’t matter. You can never truly bring back the past. It’s a lesson only Daphnes learns.

“My children… Listen to me. I have lived regretting the past. And I have faced those regrets. If only I could do things over again… Not a day of my life has gone by without my thoughts turning to my kingdom of old. I have lived bound to Hyrule. In that sense, I was the same as Ganondorf.”

In a way, Ganondorf is faced with the same crisis the Hero of Time is presented with in Ocarina of Time and Majora’s Mask, but where Link ends his story triumphantly riding towards the future with his head held high, Ganon clutches the past with a tight grip and doubles down. He cannot move on from what he’s lost.

Being a layered villain — a character in general — requires a degree of real, human behavior. Ganondorf’s actions, world view, and self-perception are welcomingly realistic. When faced with the absolute worst thing he’s ever done — something that resulted in his divine imprisonment — Ganondorf’s takeaway is that he did it all for the right reasons and he’d do it all again the first chance he gets. Even in real life, self reflection doesn’t always lead to self betterment. The fact of the matter is that no one sees themselves as the villain of their own story. The wrong line of thought can end up only reinforcing your worst qualities and some people will always find a way to justify themselves. Defeated at the height of his power, what Ganon really seeks is not redemption for the Gerudo but retribution against a world that moved on without him.

It’s not enough to conquer the Great Sea, Ganon wants Hyrule, he wants a symbol of his past tied to the lies he’s told himself for centuries. He merely supposes he coveted Hyrule’s wind. Even his grand realization isn’t as ironclad as he presents it. But it is real. Hypocrisy isn’t always intentional, after all. It just is. And there’s nothing to indicate that Ganondorf isn’t earnest to some extent. The idea of a sympathetic Ganon isn’t exactly new. Ocarina of Time’s script director Toru Osawa actually intended to make Ganondorf more likable from the very beginning,

“This time, Ganon will actually have parts where he is rather good.”

While those “good parts” don’t exactly shine through in Ocarina of Time, it’s not difficult to pity or even be endeared by what Ganondorf says in The Wind Waker. He misinterprets the reality of the situation, but that doesn’t mean his feelings are necessarily insincere. He wants to bring back the only home he’s ever known. He feels guilty enough over the tribe he lost to recontextualize his actions to have been about them all along. It’s a lie, but it’s one he tells himself just as much as the audience. There’s real depth that makes Ganon a richer character. More than a beast or a tyrant, Ganon is a broken old man — as humble as he is vile. 20 years later, The Wind Waker’s Ganondorf is still The Legend of Zelda’s most nuanced villain.