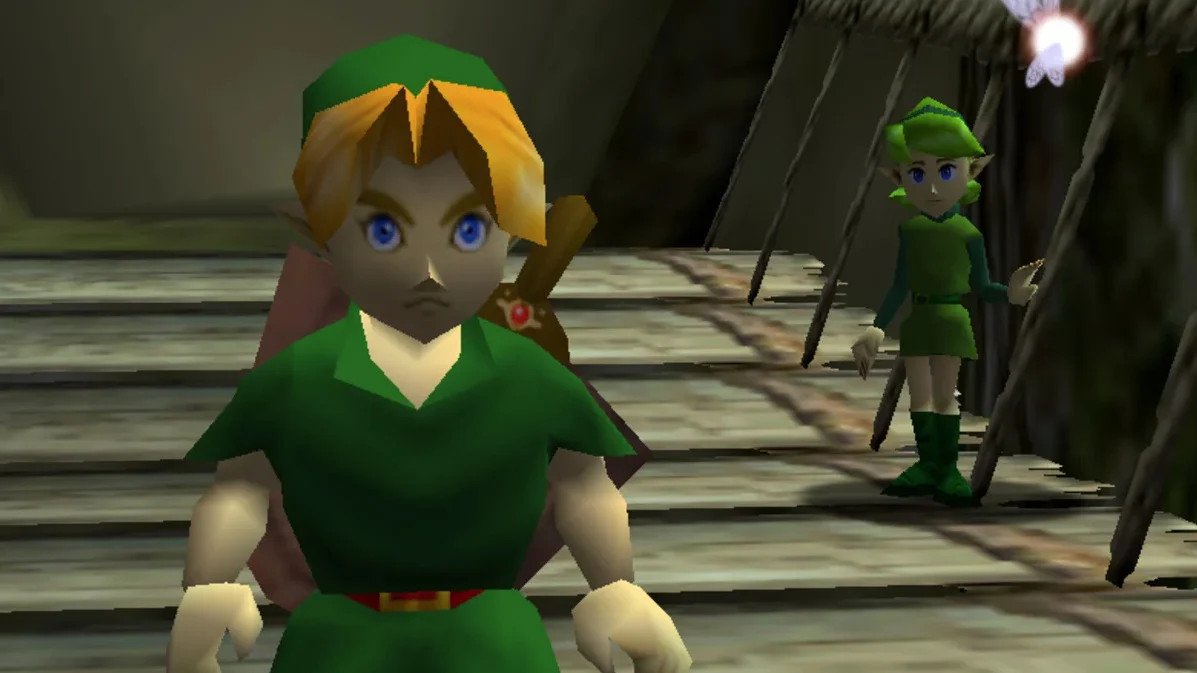 My father always loved video games. A Brazilian immigrant who moved to the United States in his early twenties, he’d spend the little time he had away from work either watching soccer, much to my dismay, or playing video games. Some of my most cherished childhood memories involve me bundled up in my bed watching my father play Super Mario 64 until finally drifting off. I played video games on my own time, of course, but I doubt I ever would have with as much passion if I didn’t have my father for reference. Whenever he bought a new game, I’d consider it a race to see who could finish it first. I won most of the time, but I also wasn’t working two jobs. Which is probably for the best as I was barely five years old.

As cherished as these childhood memories are, there’s only one I can remember in explicit detail. I was sitting on the living room floor, playing with my toys, when my dad came home excitedly carrying a bag from FuncoLand. He stood in front of the television to grab my attention and informed me that he’d just purchased “ the greatest game ever made.” I knew he was being earnest because he said it in English and not Portuguese, a rarity in our household. He tried explaining to me that it was a sequel to The Legend of Zelda: A Link to the Past, a game I had played quite frequently on our Super Nintendo, but it all went in one ear and out the other. I was completely enamored with the very concept of there being a video game greater than all the rest.

Something being better, let alone the best, had never really occurred to my five-year-old mind. I had genuinely believed red was the best color, but it was a conviction I hardly registered in my brain. Ocarina of Time was in a league of its own, it wasn’t just better, it wasn’t just the best, it was the “greatest game ever made.” That phrase seemed to trump all my notions of red being the best color. It was just a color and blue had been my favorite color last year. This was a video game, and one that clearly wouldn’t lose its title so easily as poor blue did.

I had visited Hyrule before, but never as vividly as when my dad booted up Ocarina of Time for the first time. He named Link “Renan,” a tradition I continue to this day, and my life was forever changed. Suddenly, an ancient tree straight out of mythology was setting the stage for the story, suddenly Link was entering said tree with sword and shield in hand, and suddenly that tree was dying right before my eyes, but not before passing on a tale of creation, one that would never escape me. What could only have been an hour and a half seemed to last an eternity. Time slowed down as I soaked up every single detail on screen. As Link traversed across Hyrule Field, fending off Stalchildren outside Hyrule Market’s gate, I understood I couldn’t just experience Ocarina of Time through my father. This wasn’t just a race to the finish line, it was an adventure I needed to undergo on my own accord.

My father played Ocarina of Time for the rest of the evening. While I was anxious to start my own file, I didn’t particularly mind. Watching him meet Zelda, visit Kakariko Village for the first time, get attacked by redheads in the cemetery, and climb Death Mountain all prepared me for the journey I was about to undertake. The very next day, I hastily brushed my teeth, skipped breakfast, and properly visited Kokiri Forest.

Nowadays, I can 100% Ocarina of Time without a guide in about 15 hours. Every little detail is seared into my mind. I’ve also had nearly two decades of experience, though. Back in 1998, I was a directionless child struggling to pierce the Great Deku Tree’s web. After more trial and error than I’d care to admit, I made it to the Deku Tree’s lower level and it was smooth sailing for a good chunk of my freshman playthrough. I rushed across Hyrule Field, stealthed my way to Zelda, bombed Dodongos, and rescued Princess Ruto from Jabu-Jabu’s Belly. With six hearts, two bottles, and a single heart piece to my name, I was ready to deliver the spiritual stones to Princess Zelda and pull the Master Sword.

As I took my first steps outside the Temple of Time as an older Link, I froze. This wasn’t the Hyrule I was accustomed to. It was a perversion of the lush landscape I’d come to love, the rich world I so happily watched my father adventure through. Redeads littered the marketplace and I shut off the Nintendo 64. I couldn’t do it, I was too crippled with fear. My journey had come to an abrupt end and I returned to experience Ocarina of Time exclusively through my father.

Every night, I toyed with the idea of facing my fears as my dad tackled dungeon after dungeon. Could I really be brave enough to hunt ghosts in the Forest Temple? Would I be able to save every Goron in the Fire Temple? How can I be expected not to drown in Water Temple when I’ve never even been in a pool before? As my dad conquered the Gerudo Forest and crossed a mystical desert to reach the Spirit Temple, I’d had enough. Tomorrow, I would make it past the redeads.

I’d done it before in the cemetery, but there was a clear path for me to take around them. Here, they were all out in the open. I took a step back outside, and froze. This time, I was determined, though. I closed my eyes and pressed the joystick towards the exit like my life depended on it. As I crossed that familiar moat, I was finally back in Hyrule Field. A wave of relief washed over me and I called my father at work to gush over my accomplishment.

As a child, Ocarina of Time was fun because it was a new experience I shared alongside my dad. Looking back as an adult, however, it’s abundantly clear to me why Ocarina of Time gripped me, a five-year-old, and my father, a man just pushing thirty, so equally. It’s a game paced for all play styles.

My dad was already a series veteran by the time Ocarina of Time came out. He’d played both NES titles and was the proud owner of a 100% complete file of A Link to the Past. To him, Ocarina of Time was an expedition. I reached the Master Sword with the six standard hearts you’d have by only completing the dungeons, while he was nearing ten containers. Every night, he’d take an hour or two after work and explore to his heart’s content. I watched him uncover secrets I wouldn’t get around to until a decade later.

At the same time, however, my experience wasn’t any worse than his. I didn’t uncover nearly as much as he did, but every dungeon was an accomplishment. Getting from the Deku Tree to the Master Sword felt like an entire game to me. While I took a break of cowardice after the shift to Adult Link, I was greeted with an even grander back half when I made my triumphant return. Where he took care to speak to NPCs and find heart pieces in between dungeon, I rushed to each Temple because I couldn’t contain my excitement. Where he was able to use the Biggoron Sword against Ganon, I stumbled around with my hookshot. He had a triumphant moment with a weapon he’d earned, and I had a tense moment fighting for my life without a sword. Both wildly different feelings, but equally meaningful moments in the context of our playthroughs.

It’s a cliche to call Ocarina of Time the greatest game ever made, and I don’t necessarily think it is the greatest game ever made, but it’s certainly up there in terms of design. I’ve gone back to Ocarina of Time every single year since, and the love is never lost. If anything, my love of the game grows with every playthrough. The Great Deku Tree isn’t just a well-paced introductory dungeon, it’s an exercise in teaching new players how to deal with verticality in a 3D space. The Forest Temple, which I loved for its spooky atmosphere, I love more now for how it tells a story of an abandoned manor without ever saying a word while challenging me to remember key details in the layout so I can return with the correct equipment. The unintended sequence breaking is more than just a fun way to replay the game, it’s a reminder of how well crafted the game actually is. You’re nudged in a specific direction, but you aren’t heavily roadblocked for straying like in later Zelda entries.

At its core, Ocarina of Time is the story of a boy becoming a man. It’s about abandoning one’s childhood out of necessity. More importantly, it’s a story both a child and an adult can relate to. When I play Ocarina of Time today, I think of that rushing wonder I felt playing it as a child, but I imagine what my father must have been feeling. I imagine that he noticed the same design nuances I do, that he saw a world fully realized in fantasy and epic. When I make my way up Ganon’s Tower, his haunting organ playing looming in the background, I imagine he felt that same anticipation that I do. A long journey finally coming to an end, a bittersweet goodbye to a land we spent so much time in. I would continue to watch my father play video games long after Ocarina of Time, but never in the same way. The voyeuristic element had gone away. It wasn’t a son simply watching his father, it was a father and son sharing something together. I realize now my father wanted to show me these games as much as I had wanted to see them.

I always liked video games, but I never truly loved them until I saw them through my father’s eyes.