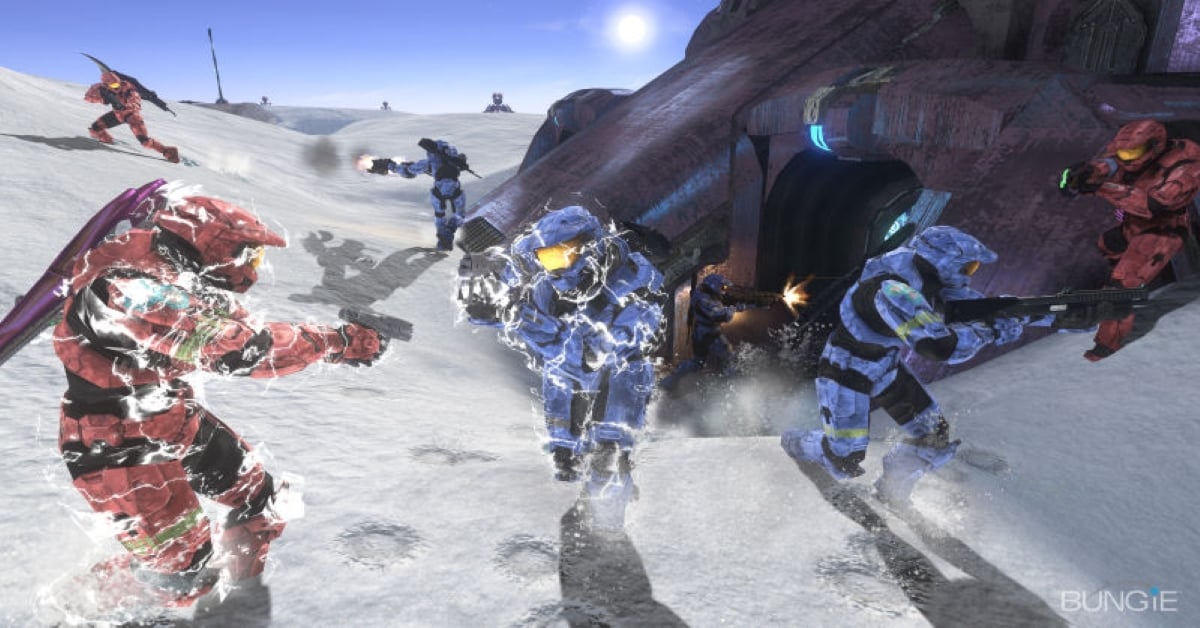 Okay, Halo 3 didn’t help me win the lottery or recover from a serious illness. What it did do was take over my summer of 2009, and probably a fair chunk of the spring and autumn too. All whilst single-handedly introducing me to Xbox Live and the ever-broadening horizons of online gaming with its multiplayer, and I’d say that qualifies. It also led me to pick up its predecessors and sequels – easily another hundred hours out my life (perhaps ‘into’ would be the better word?). And if a game does that, it’s done a really good job.

Let me take you back to my late childhood …

For a game that released in fall 2007, I was a little late to the party, but not so late that I missed it completely. Halo: Reach wouldn’t release until late 2010, so I still got to experience the best of the multiplayer in 2009 before a lot of players jumped ship. If not actually the first game I played on Xbox Live, then it’s the first that stands out in the memory. My only exposure to multiplayer gaming up till that point was the MMORPG RuneScape, which I played more for its role-playing than its massively multiplayer aspects, and which offered a more time-consuming ‘work your way up to the good items’ sort of fun that could drag on forever. Halo 3’s fun was more instantaneous, more democratic, allowing you to simply jump into the multiplayer and have a blast. No tedious hours spent mining or fishing. No travelling long distances for a quest.

The earliest memory I have of the multiplayer is entering a custom game partway through with a bunch of school friends on the map ‘Sandtrap’ and finding that one of the sandcrawlers which was supposed to be parked firmly on the ground was somehow hovering high up in the air, acting as a makeshift sky base. I have no idea what kind of mod was used to get it there when the map was made. All I know is it was a heck of a lot of fun.

It was an experience that would set the tone for most of the multiplayer, because Halo 3 had plenty of funny, heart-in-mouth moments, like the inevitable stupid death or being blasted to smithereens by the Guardians if you strayed out of bounds. Or the peril of encountering a clan in matchmaking, who usually had the advantage due to communication and actual teamwork (a rarer quality than you think).

Speaking of the matchmaking, it could often be plagued by whiny, screaming kids (myself included, minus perhaps the worst of the screaming), but it was still above par, with a mixed bag of game modes from the popular Lone Wolves to the chaotic Big Team Battle, right down to the more standard Team Slayer and Capture the Flag. These were split between unranked and ranked playlists, the latter of which I didn’t go near, despite an above average ability.

They’re played out on a wide assortment of maps, and for a series that’s not short on good multiplayer maps, Halo 3 has one or two to its name. There’s ‘The Pit’, a military training complex with one too many staircases and flanking routes; and ‘Valhalla’, a worthy tribute to Halo: Combat Evolved‘s highly-celebrated map ‘Blood Gulch’. Plus, every one feels different, with its own distinct feel and identity. ‘Orbital’ is a corridor fight on a space station with long sightlines. ‘Sandtrap’ is an open fight amidst some old ruins out in the desert. ‘Assembly’ is a close-quarters battle in a Covenant munitions factory, color-coded in purple.

The multiplayer matchmaking was good, but by far the most fun was to be had in Custom Games. This basically meant playing quirky user-made game modes on equally quirky user-made maps, made through the Forge design mode. Forge gave players the ability to load the stock maps and redesign them or build from scratch with a blank canvas, to essentially make a map within a map. The level of editing and creative potential on offer was mind-blowing, and there’s just something terribly appealing about having fun on user-created content in a larger game. For console players, this was still a relative novelty at the time, or at least it was for me.

A personal favorite was ‘Bunker Hill’, a user-created zombie survival game where everybody (barring the zombie) had to retreat into a confined fortification and see who could survive the longest. It featured a secret passageway and even a makeshift waterfall and miniature pond in the form of blue plasma. Another was Cops n’ Robbers, where the cop was given invincibility and had the power to dispose of anybody through the barrel of a shotgun, which made for some pretty interesting games of Simon Says. Then there was Duck Hunt, where one player had to snipe everybody (the ducks) as they ran from left to right across a multi-level building. The player who survived to the top, if any did, was teleported to the sniper’s box and given the chance to take them out.

Halo 3‘s main competitor at the time was fellow shooter Call of Duty 4: Modern Warfare, which was less democratic. There is a ranking system in Halo 3, but it existed more for bragging rights than anything else. It certainly didn’t give you any exotic weapons or unlockable items that could affect gameplay and fatten up an already high score (certainly not an AC-130 at least). Just a shinier badge and a Katana: a samurai-like sword which the player character could brandish on their back for cosmetic purposes. Halo 3‘s multiplayer was so democratic in fact that there was even the option to delay the lobby countdown leading up to a match, and it always brought a laugh or two when someone did it. Luckily, the lobby leader could just as easily kick the person or persons responsible, which also brought a laugh or two.

Unlike the multiplayer of pretty much every future Call of Duty title, Halo 3 was also gloriously free of micro-transactions. There is payable DLC and even one free map (the decent yet barely played ‘Cold Storage’, which might as well have been put into storage), but it was all bursting with good content. Not least the ‘Sandbox’ map which, as the name might suggest, served as one big sprawling building space for would-be map designers, with an open skybox and a subterranean crypt to boot.

What for me marked out Halo from the Call of Duty series was the slower pace and the colorful, more exotic weapons and environments. A certain friend said he preferred Call of Duty because it’s more realistic, but really no shooter can ever truly capture the horror of war. (Plus, he’d never actually played Halo but just ‘knew’ he preferred Call of Duty because that’s all he played.) I like my games to be mildly psychedelic and run counter to reality, which is what I’m trying to get away from whenever I sit down to play.

In the real world, or at least Call of Duty 4: Modern Warfare‘s shoddy imitation of it, an AK-47 is an AK-47 and a grenade is a grenade, but Halo 3‘s weapons are altogether more nuanced. A lot are after all alien-created in a fictional world, so they take a certain imagination to even come up with. The Plasma Grenade is no ordinary grenade but instead sticks to enemy players and vehicles on impact, and the Needler fires rapidly accelerating pink spikes. They also have different uses. Take the Plasma Pistol, a fairly weak weapon ordinarily but which when powered up has the ability to disable vehicles and players’ shields. Everyone can use the Battle Rifle to its rudimentary basics, but the player who knows how to wield it to its deadliest potential is twice as dangerous as the one who doesn’t. Unlike in Call of Duty 4: Modern Warfare, the weapons also take much longer to whittle down a player, meaning if you’re caught unawares there’s usually the chance to turn the tables on your attacker.

As for the Story…

The story was never something I got invested in. All I knew was it’s about fighting aliens in strange, equally alien environments, which was frankly all the information I needed to know. To this day I still have no idea who the Arbiter is or what the ‘Halo’ in the franchise name is actually referring to. And it doesn’t matter. As with many good shooters, the gameplay itself is its own reward. If I want a good story on top of that, I’ll go play Half-Life 2.

That didn’t however stop me from finishing the campaign on Legendary difficulty with some virtual friends, which I guess sort of counts as multiplayer anyway. Nothing beats hurtling down in a vehicle on the final moments of that last mission as the ground is blowing apart all around you and earning a much sought-after achievement. I never met those guys in real life, but it sure felt like I had, and it’s got to go down as one of my best ever gaming moments.

Even if not the finest Halo title overall (I’ve barely touched Halo Infinite, so I wouldn’t know), Halo 3 for me represents the sheer peak of Halo multiplayer. I’m sure a lot of people will say the same about Halo 2, but I wasn’t around on Xbox Live in 2005 to enjoy it (in fact, I don’t have a clue what I was doing in 2005). Halo: Reach, even if uninfected by micro-transactions, would make a slight veer in Call of Duty’s direction by introducing loadouts and class power-ups, so arguably Halo 3 was the last of the ‘classic’ Halos when it came to multiplayer.

Now, years later, the once-teeming servers lie mostly empty and will shut down fully next year, which just goes to show that no matter how good a game is when it first releases, something better is bound to come along and take its place, or something worse can simply render it outdated. The unstoppable encroachment of Time.

I mentioned at the start how Halo 3 practically took up most of my summer. And you know what? I wouldn’t have spent that time any differently.

Games That Changed Our Lives: The Matrix Online