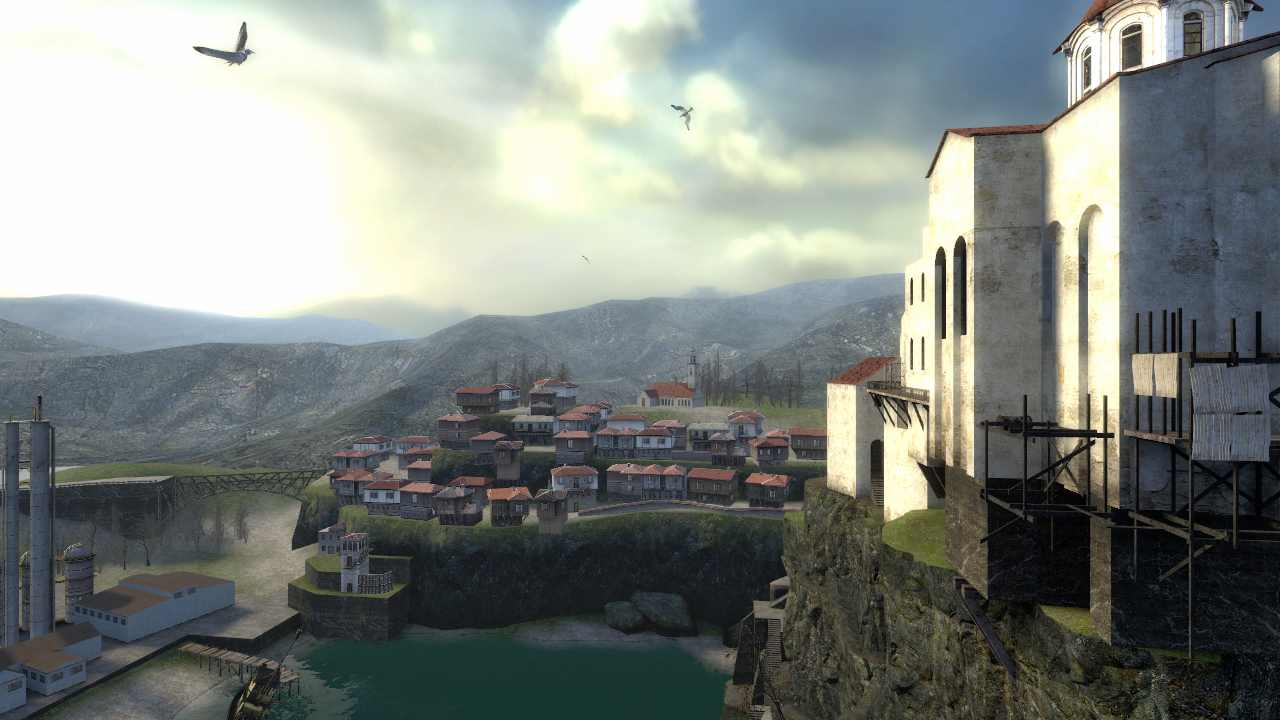 We wake up in a decaying train, aisles littered with trash and crimson seats blackened by overuse. We soon arrive at an old station and emerge into an Eastern European city, which art director Viktor Antonov probably modeled on his hometown of Sofia, Bulgaria. Previous videogame cities tended to be static collections of buildings and non-playable characters waiting to be talked to. But not City 17.

Here’s a world in motion, fellow passengers being herded towards uncertain destinations, humanoid guards charging electric batons and forcing people to pick up used soda cans, surveillance drones photographing everyone’s position, gigantic tripods patrolling the streets, desperate tenants – or are they inmates? – hunched in barely furnished apartments, an urban symphony the likes of which experimental silent film directors could have only dreamed about, and all of this while players remain in control of their movements, choosing what to see and for how long. We can tic-tac-toe against ourselves at a forgotten playground, flipping the noughts and crosses on a weathered panel. There, we can consider the harrowing absence of children and how this, more than anything else, conveys the dystopian depths of a foreboding place we still know so little about – or we can just speed towards the next scripted event.

Experiencing this for the first time, many gamers likely pumped their collective fists into the air and screamed, “Yes, this is the future!” And not only because Half-Life 2 belongs to the science fiction genre. When it was released in 2004, it was – and in 2016, still is – “the future” because it heralded the medium’s narrative potential. Of course, Half-Life, six years earlier, was the real innovator: its opening minutes in the Black Mesa Research Facility are equally unforgettable. But its sequel reached new levels of immersion and visual fidelity. It gave us an even clearer vision of where gaming could go, a promise of interactive sublimity. Not that Half-Life 2 actually lives up to it. Most of its remaining 15 hours are devoted to lengthy corridors filled with alien dangers and frenetic gunfights, interrupted by brief physics puzzles and, yes, spellbinding storytelling passages with dialogue and plot developing around us as we navigate the environment. Almost ten years later, Naughty Dog’s The Last of Us, also labeled “the future” when it came out, recycled the same Half-Life structure – albeit with the occasional cinematic, which Valve’s classic avoids. The same applies to other accomplished wanna-bes, like Alan Wake or Alien: Isolation. Whether due to market pressures or genre tropes, their stories are always fragmented by obligatory action or stealth sequences. Which, of course, can be great fun, no doubt about it. (And, in Alien: Isolation, spectacularly immersive.)

But what would Half-Life 2: The Opening play like? That is, if it lasted 15 hours. So-called walking simulators have since tried to answer that question, and it’s not surprising this controversial “genre” exists due to a pair of Half-Life 2 mods: Dear Esther and The Stanley Parable. In the intervening years, we’ve also had Gone Home, Thirty Flights of Loving, and The Beginner’s Guide, among others. They all steer clear of action or stealth, true, but they’re also really short and relatively cheap. This is also true of Valve’s subsequent improvements on its own formula, Portal and Half-Life 2: Episode 2. Intense and concise journeys, not quite sprawling and epic. (Portal’s more expansive sequel is the exception – but it’s also rather bloated, in this writer’s opinion.) Half-Life 2’s “future” remains, after more than a decade, out of reach.

But maybe it has always been a mirage. Beyond the scripted events and memorable sights is an underlying contradiction. Half-Life 2 means to build a living, dynamic narrative world. Everywhere the player looks, people and machines are moving, victims are screaming in despair, guards are charging into downtrodden apartment buildings, allies are suggesting emergency escape routes. Everything occurs despite the player – and simultaneously because of her. The more we play Half-Life 2, the more apparent it becomes that we personally activate every event, sight, and moment by crossing invisible thresholds, which act like switches. If we remain still, the narrative world around us withers and dies. Non-playable characters have few lines of dialogue, and after they’ve depleted them, they can only stare silently at us like mannequins. The narrative clockwork depends on us to wind it up.

True, very few videogames offer satisfying non-playable characters, with schedules and complex inner and social lives. Those that do, like Majora’s Mask and Ultima VII, are still ahead of the curve. In most other cases, even in hallowed masterpieces like Planescape: Torment, they lead desperately boring existences. (If they’re merchants, for example, they’ll often remain behind their store counters night and day.) But at least they’ll be doing something when we’re not there. Half-Life 2’s digital souls are, by comparison, merely puppets pulled into motion by our progress.

And maybe we’re puppets, too. Our arrival in City 17 is beautifully orchestrated – and unfailingly linear. It has to be in order to work its spell. The rest of the game follows suit, since we always have a single direction to run in. Detours, when available, which isn’t often, lead into isolated rooms or hallways with supplies. Then it’s back to the main road. This is no living world; it’s obviously a designed environment, a rollercoaster with a mechanic behind the curtain urging us along.

And who’s the mechanic? Well, inside the fiction, the ghostly G-Man is the strongest contender, since he appears to wield some – thus far unexplained – control over our destinies. The real answer, of course, is Valve itself. Half-Life’s systems are constantly reminding us of the game designers. Artistic statement or unfortunate flaw? It’s not entirely clear in the Half-Life games, but its descendants, Portal and The Stanley Parable, are more transparent about their self-reflexive goals. They pit us against obvious stand-ins for the game designers: a perverse artificial intelligence in charge of a glorified rat maze and a deranged narrator with serious self-esteem issues. Our struggles, in both cases, are against digital overlords, against storytellers and builders of prisons. (Also, neither title attempts to hide its thresholds, which activate dialogues and events. On the contrary, both readily announce them: Portal has us enter distinct numbered rooms, while The Stanley Parable has us choose between bifurcating paths. The thresholds’ artifice becomes the guiding structural principle.) It’s almost as if these games had identified the main issue with Half-Life’s scripted approach and erected entire gameplay concepts on top of it.

Maybe that’s why both Portal and The Stanley Parable are so successful. They raise their self-reflexive themes on the foundation of a franchise that is already perhaps unintentionally self-reflexive. Or maybe it’ll prove to be intentionally so. Who knows? We’re still waiting for Half-Life 3 or at least Half-Life 2: Episode 3. Neither may ever happen.

Half-Life 2’s shadow hangs over Valve, as over the entire industry. A shadow cast not by the actual game, which as a whole has been improved upon, so much as by its potential or promise. The question, really, is whether this promise will ever be fulfilled by the systems that sustain it – or if these, having reached the limits of their effectiveness, can now only grow more self-reflexive.

Maybe “the future” of videogame storytelling lies elsewhere and this particular narrative formula, like the train that brings us to City 17, has reached the end of the line.