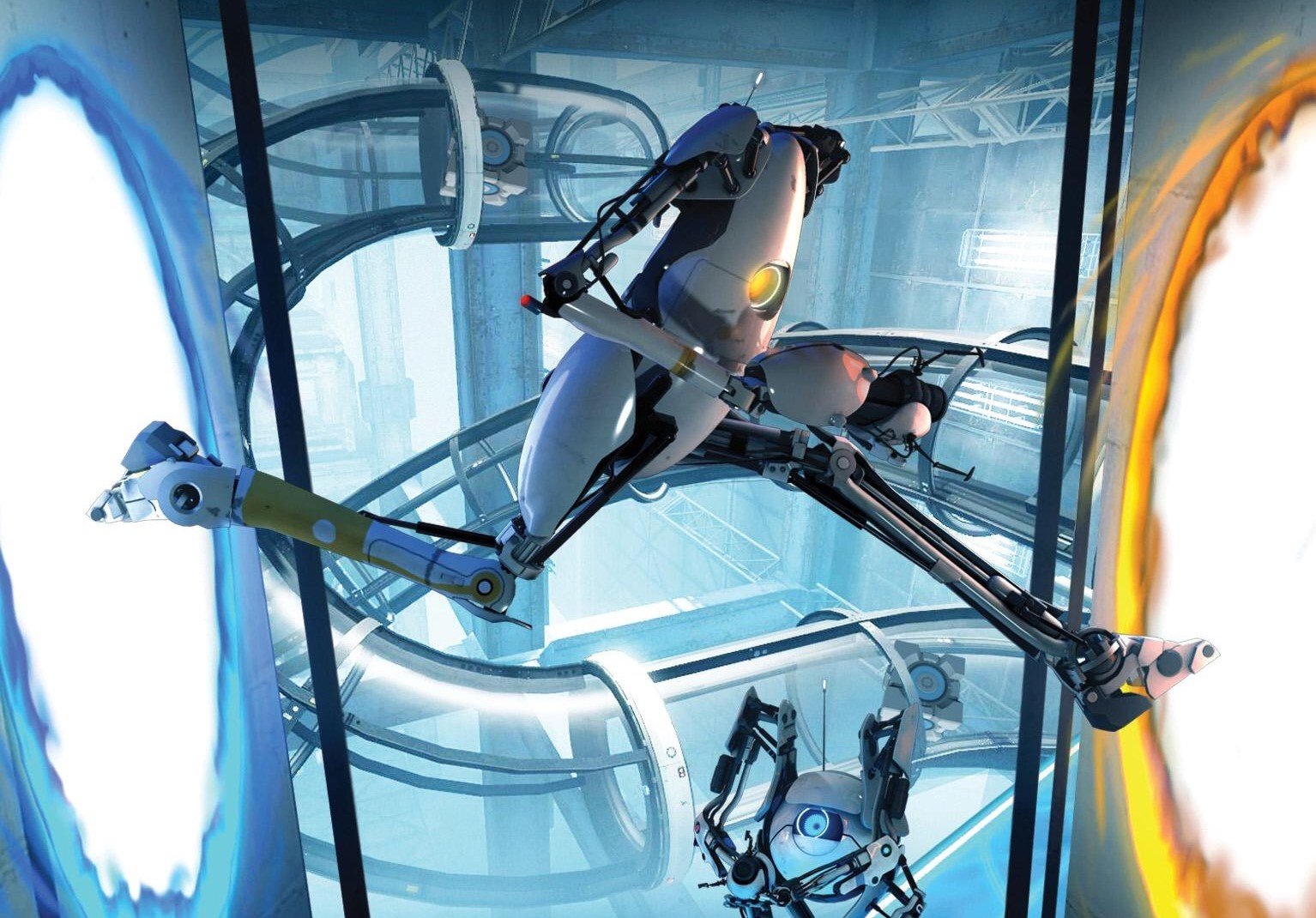 Back in 2007, developer Valve released a collection of five games titled The Orange Box. The collection contained Half-Life 2, already a highly esteemed title, along with its two episodic expansions and Team Fortress 2, which would go on to become one of the most popular and influential multiplayer shooters of all time. In addition to these massively hyped-up games, the collection also included a short little title called Portal, a first-person puzzler that tasked the player with placing portals in the environment to solve challenges. Despite its limited scope, Portal ended up becoming surprisingly popular due to its unique concept, simple yet challenging puzzle gameplay, and dark yet witty story and humor. Positive word-of-mouth led the game to become a pop culture phenomenon, and this combined with the gameplay’s near-limitless potential meant that a sequel was inevitable. When Portal 2 eventually arrived on April 19, 2011, it became clear that Valve capitalized on that potential, and it quickly became adored by players everywhere much like the first title. Now that the game is turning a decade old, it’s worth looking back at Portal 2 and examining why it’s such an interesting title.

One of the best aspects of Portal 2’s gameplay is its purity. In contrast to most other AAA titles, which have and still are trending towards more complex systems or leveling mechanics, Portal 2 has a straightforward control setup that nearly anyone even remotely comfortable with first-person games can get into. The player character can move, jump, zoom in, crouch, pick up and let go of objects, and shoot either a blue or orange portal depending on where the character is aiming. These are just about the only tools players need to learn to get through the game, and the character doesn’t expand her ability set as she progresses, resulting in a consistent experience throughout. Complimenting the simple controls is an easy-to-understand core premise; when players set down two separate portals on white surfaces, the player character and all other objects can pass through one portal to come out the other. The entire game revolves around this single mechanic, which strikes the perfect balance of being simple enough to come to grips with while being complex enough to allow for a seemingly infinite number of ways puzzles can be designed. The portals represent a kind of elegant game design rarely seen in the AAA landscape outside of Nintendo’s best works, and even though Portal 2 gets a ton of mileage out of this mechanic, one gets the impression that there is still so much more that can be done with it. This isn’t a criticism of Portal 2 at all—it’s simply a testament to how well-thought-out the series’ core gameplay is.

Of course, this wouldn’t be a good sequel without some shakeups to the formula, and the additional mechanics of Portal 2 are tasteful and rife with puzzle-solving potential. Hard-light bridges, for instance, can be extended and transported using portals to provide walkable surfaces for the player character or block certain objects or hazards such as turret fire. Excursion funnels can transport objects like a tractor beam and can be manipulated with portals in a similar fashion to the hard-light bridges. Unique gels can bounce the player character or vastly increase her running speed, and the player can combine these properties with portals to solve momentum-based puzzles. These are just a few of the new mechanics introduced in Portal 2’s campaigns, and the best part about them is that they all serve to bolster the portal mechanics. None of the new gameplay elements feel superfluous or distract from that core premise, which allows Portal 2 to expand the scope of the first game while still retaining the gameplay’s strong mechanical focus.

Thinking With Portals, But With a Friend

Portal 2 is actually split into two main campaigns. Given that the previous game was a solely single-player affair, fans of that title will likely be more interested in Portal 2’s single-player mode, especially since it’s where the main story takes place. But Portal 2 also sports a surprisingly robust co-op campaign that is equally as good if not better than the single-player mode. The solo campaign occasionally pares back the mechanical challenge in favor of story sequences or set pieces, but the co-op mode ditches all of that and is instead laser-focused on Portal 2’s core gameplay systems. Co-op feels like a natural fit for the Portal series, as even entirely solo puzzle experiences can be more enjoyable when thinking through puzzle solutions with a friend. The puzzles built exclusively for the co-op mode brilliantly test both players’ coordination and ability to work together, and they arguably explore the game’s mechanics even more thoroughly than the single-player mode does. Although the story and humor constitute a large part of the series’ appeal, the co-op mode demonstrates that Portal’s gameplay holds up wonderfully on its own, which makes the campaign one of the game’s best additions.

The Difficulties of Following Up a Story

Speaking of the story, it’s here where Portal 2 risks alienating fans of the original. The first Portal was an incredibly funny game, and this was mostly due to its main antagonist, the test chamber overseer GLaDOS. Being an AI, GLaDOS maintained a cold, clinical demeanor even when she was trying to express human emotions, and that contrast between her robotic speech and the sarcastic, often dark remarks she made was extremely entertaining. Portal 2 is a much more outwardly funny and goofy game than the original, and there are a few more characters other than GLaDOS that have a role in the story. Wheatley, the bumbling personality core turned antagonist, is much more emotive than GLaDOS and is always making fast-paced, witty jokes whenever he is onscreen. Cave Johnson, who is only ever heard in audio recordings, has a charismatic, bombastic persona, and he makes remarks about outlandish concepts such as moon rocks and “mantis men.”

These characters mark a significant shift in tone compared to the original game, which always had a layer of unease to its humor. This tone is not absent in Portal 2 by any means, but it is often offset by the more colorful characters and dialogue that take away from the lonely atmosphere of the first title. Even GLaDOS starts to lose what made her such an entertaining yet imposing presence, especially when she and the player character are forced to work together near the end of the game. In addition, the greater emphasis on humor leads to some of the jokes falling flat. When GLaDOS has her personality transported into a potato, for instance, it feels like the developers are trying to replicate the magic of some of the original game’s memes, such as the iconic “the cake is a lie” moment, which makes the attempt feel somewhat disingenuous.

When the jokes do land, however, they really land. Despite the impact both Wheatley and Cave Johnson have on the game’s tone, their dialogue is incredibly entertaining, and it’s engaging to witness both characters deteriorate over the course of the campaign. The unique appeal of GLaDOS’s dialogue is mostly preserved, and it’s fun to see both a more vengeful and a more compassionate side to her. Some of the environmental jokes are downright gut-busting; opening a massive, intimidating-looking vault only to reveal a regular-sized door behind it is the kind of subtle joke that may go over some players’ heads but can hit like a truck once they take notice of it. Just as important as the humor are the more unsettling aspects of the world, which the game really nails. The old Aperture section feels vast, dark, and oppressively lonely, which is the perfect environment to represent the low point of the story after Wheatley’s betrayal. Rattman’s paranoid wall sketches from the first game return with a vengeance, and they make for some truly disturbing Easter eggs. In one of these secret sketch locations, players can hear a rambling voice in the distance when they get close to the wall, a brilliantly off-putting touch that has inevitably led to fan speculation. These details really enrich the world of Portal 2, and they make up for some of the narrative’s more disappointing aspects.

It’s debatable which Portal installment is superior, but it’s nonetheless remarkable how successful Portal 2 is as a sequel. It takes the simple yet robust gameplay of the original and expands on it in all the right ways, resulting in a mechanically rich puzzle experience that engages at every turn. Certain aspects of the story may not be as effective as they were in the first game, but it’s difficult to care in the moment since the writing and atmosphere are still so strong. In a way, it’s unfortunate that the series has remained dormant for ten years, as the core conceit of Portal is still rife with potential. But in celebration of Portal 2’s ten-year anniversary, it’s worth putting aside any small disappointments in the sequel to appreciate just how much it pushed the envelope.