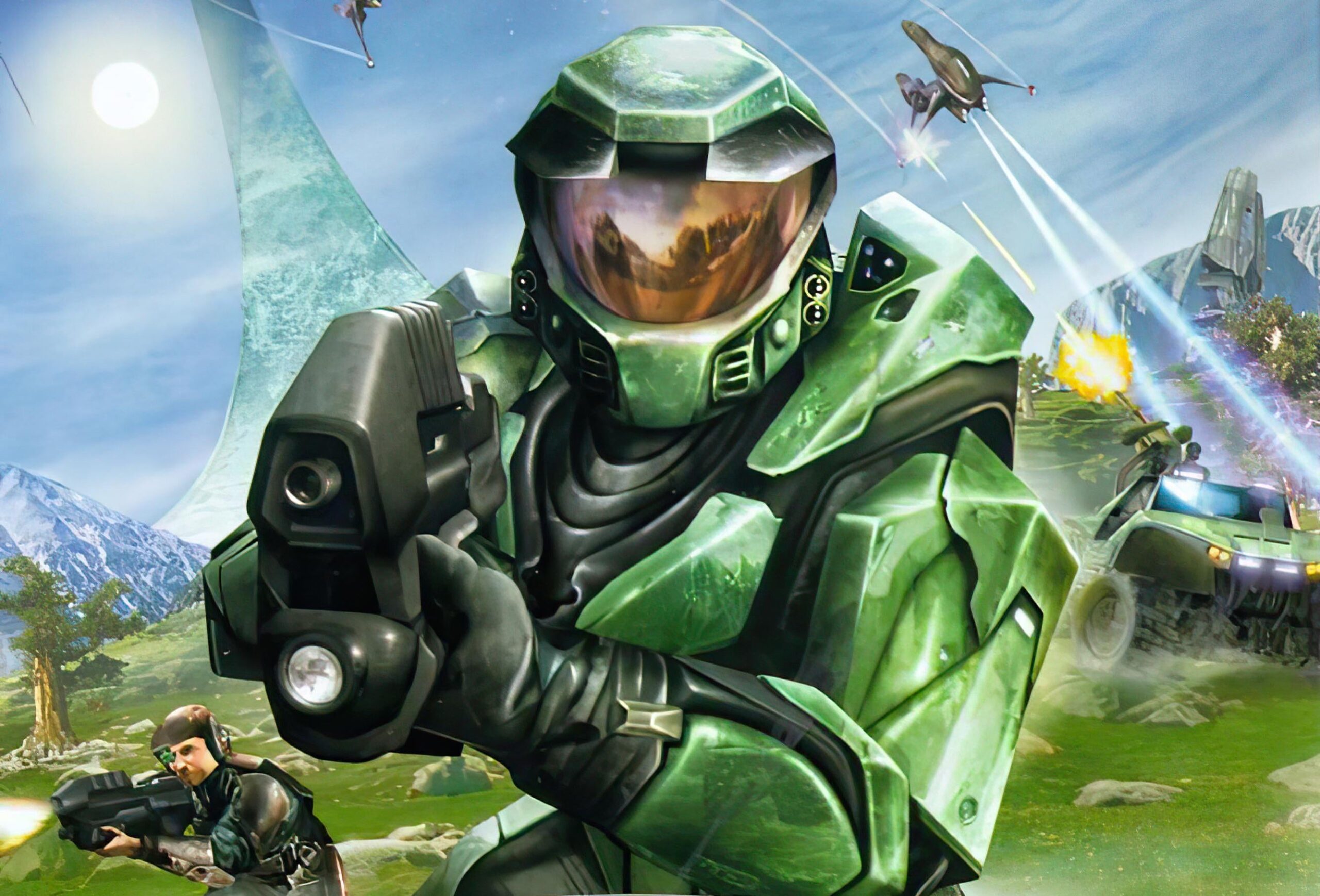 Evolutionary not revolutionary, Bungie’s Halo: Combat Evolved took all that was good about the primordial sludge of earlier first-person shooters and propelled the genre headfirst into the new millennium. Said shooters are and always will be mindlessly fun, but before 2001, they lacked the cutting edge and that little bit of polish, especially in terms of movement and controls. In that regard, the first coming of Master Chief was a revelation from Heaven. The first games in long-standing franchises can often be imperfect, underwhelming entities, but not Halo: Combat Evolved. It’s not perfect, but it’s not far off it. It also pretty much kickstarted the Xbox age, with no sign of it or the Halo series coming to an end anytime soon.

Bungie’s debut entry in the series doesn’t fail to make a good first impression. The player assumes the role of Master Chief, a cybernetically advanced super-soldier tasked with fending off hordes of Covenant, an affiliation of alien species waging holy war against humanity – an idea which drew a little inspiration from classical science fiction, and a little from James Cameron’s Aliens (1986).

Instead of a slow build-up to the action, Halo: Combat Evolved chooses to plunge straight into it after a short tutorial, with the Covenant invading the ship on which Master Chief is resting in a state of cryo-sleep. Following a desperate fight and a panicky evacuation, it’s a case of a downward drop on an escape pod with a bunch of marines, killing everyone but Master Chief, who survives to roam the planet’s surface. A thrilling start to a thrilling adventure.

What Is It Good For? Absolutely Something

However, like many first-person shooters, Halo Combat Evolved’s greatest strength lies in its gameplay, not its story. As a pure action shooter, its finest achievement is the ability to simply let the player have a blast both literally and metaphorically. Yes, there is a background story to help frame the action, but that same action would be as equally enthralling without it. Besides, the very idea of going up against unlikeable alien invaders is a motif that pretty much everyone can sympathize with: aliens bad; humans and human-created super-soldiers (i.e. Master Chief) good. It’s a dualism understood by all and sundry.

The campaign is long and varied, best enjoyed with a friend in co-op, and the difficulty can be ramped up to Legendary for an even more memorable experience – always the hallmark of a seasoned (or senseless) Halo player. Have fun getting past The Library, a level that’s certainly not as relaxing as reading books, which may not be all that pleasant to begin with. There’s also an array of Covenant classes to fight against, from the ordinary ‘Grunt’ to the elite ‘Elite’, right up to the brawny and near-invincible ‘Hunter’. The levels also feature somewhat open environments, which lies in stark contrast to the closed-in hallways and metal corridors of other games of its time like GoldenEye 007.

Truth be told, the “Combat Evolved” subtitle was included so that potential buyers knew the game was fighting-related, but Halo: Combat Evolved does actually represent a progression from what went before. Although it is not the first-ever first-person shooter by a longshot, it’s probably the earliest one that modern gamers can go back to and feel totally at home. It truly brought the genre to the console market, because up till then, most of the good ones (with the notable exceptions of GoldenEye 007 and Perfect Dark for the N64) had belonged exclusively to Personal Computers. Think Doom and Half-Life.

The controls are smooth and for its time it also had the best physics and graphics of any console first-person shooter whilst more or less introducing console players to LAN play, even if the full multiplayer was not yet up and running (something Halo 2 would more than remedy). The game which flew the flag for the genre of games prior to Halo: Combat Evolved was probably the aforementioned GoldenEye 007, a title which for all its charm aged more than poorly. It’s only four years removed from Halo: Combat Evolved, yet the differences in quality are stark. Or consider the janky and frantic TimeSplitters from 2000, which incidentally was made by the same development team behind GoldenEye 007. Heck, even 2002’s Medal of Honor: Frontline barely comes close to Halo: Combat Evolved, despite all the riveting drama of an equally good opening level.

When it comes to the combat specifically, Master Chief’s rechargeable shield is an innovation that drastically altered the gameplay for the better, as opposed to relying on tried-and-tested collectible health packs. If he receives damage, he can simply hide behind cover for a few seconds to recharge – an ability that changed the entire rhythm of gameplay. It encourages the player to engage in and survive high-intensity encounters rather than holding back in prolonged attempts at whittling down enemies’ health, or reloading a checkpoint in the knowledge that the health bar is too low to take on the next enemy.

Halo: Combat Evolved also features the smartest and most advanced AI for the time. Well, okay, not the comical and dim-witted Grunts, but the better-ranked enemies are all highly responsive to the player’s movements, making it feel like fighting a real alien army as opposed to GoldenEye 007’s wonky-faced opponents who can sometimes be as static as traffic cones. On top of that, Halo: Combat Evolved is also one of the first shooters to integrate vehicles in the way that it did, at a time when no vehicles would have been perfectly acceptable. Piloting the Banshee is an especial treat and, unlike the Dodo from Grand Theft Auto III (also a 2001 release), it’s easily flyable.

The man is a machine, single-handedly thwarting the Covenant in their twisted alien endeavors time and time again. More to the point, he’s a Spartan, one of the human-created super-soldiers whom Bungie named after probably the greatest and most disciplined fighting unit of all time. Which is exactly what Master Chief is — a relentless, unstoppable one-man army. He does have some help along the way in the form of friendly human AI (who are mostly meatshields getting in the way), but he does most of the work himself. The best thing is, he isn’t even done yet. It’s now seven sequels later, with Master Chief set to have a central part in the upcoming Halo Infinite.

The reason why he rose to represent the Xbox brand was that as an original Xbox exclusive, Halo: Combat Evolved spawned the most successful game series in the console’s reign. Master Chief took on the mantle of being the platform’s mascot, just as Crash Bandicoot did for the PlayStation and Mario for Nintendo. The guy practically ushered in the Xbox era, which also ties in with probably the worst thing that can be said about Halo: Combat Evolved — it is only available on Xbox and PC.

The only thing that’s aged noticeably for Halo: Combat Evolved is the graphics. The campaign doesn’t feel redundant and although the game came to be overshadowed by its successor Halo 2 and then Halo 3, at least in terms of multiplayer, those pretty much stuck to the same Covenant-dispatching formula that made the first one so popular.

Speaking of the multiplayer, Halo: Combat Evolved was not all that limited. It did at least have LAN play and split-screen co-op, then a feature fully in vogue. It also boasted one of the finest multiplayer maps in Blood Gulch, a two-base, end-to-end, near-symmetrical box canyon map especially suited to Capture the Flag, complete with cavernous flanking passages down the sides. It’s a strong contender for the best map of the series, and for a franchise that’s not short on good maps, that’s really saying something. Variants of it were included with every sequel (‘Valhalla’ in Halo 3 and the pleasant-sounding ‘Hemorrhage’ in Halo: Reach, etc), and it made a raw return in Halo: The Master Chief Collection, an updated ‘anthology’ of the early Halo games which introduced several other Halo: Combat Evolved maps to a new generation.

Even before Halo: The Master Chief Collection, however, there was Halo: Combat Evolved Anniversary, a straight remaster of the original, released in 2011 and allowed players to switch between the old and new graphics at will. Other than adding things like collectibles and online play, it’s no more than a cosmetic facelift with the majority of gameplay unchanged. As such, Halo: Combat Evolved is worth playing today on its original graphics and, for the purists, on the original 2001 disc on the original 2001 console, to replicate as best as possible how the first-ever wave of players would have experienced it — minus the giant Xbox controller perhaps.

Ultimately, any more serious attempt than Halo: Combat Evolved Anniversary to evolve the 2001 classic is futile because, really and truly, it doesn’t need to.