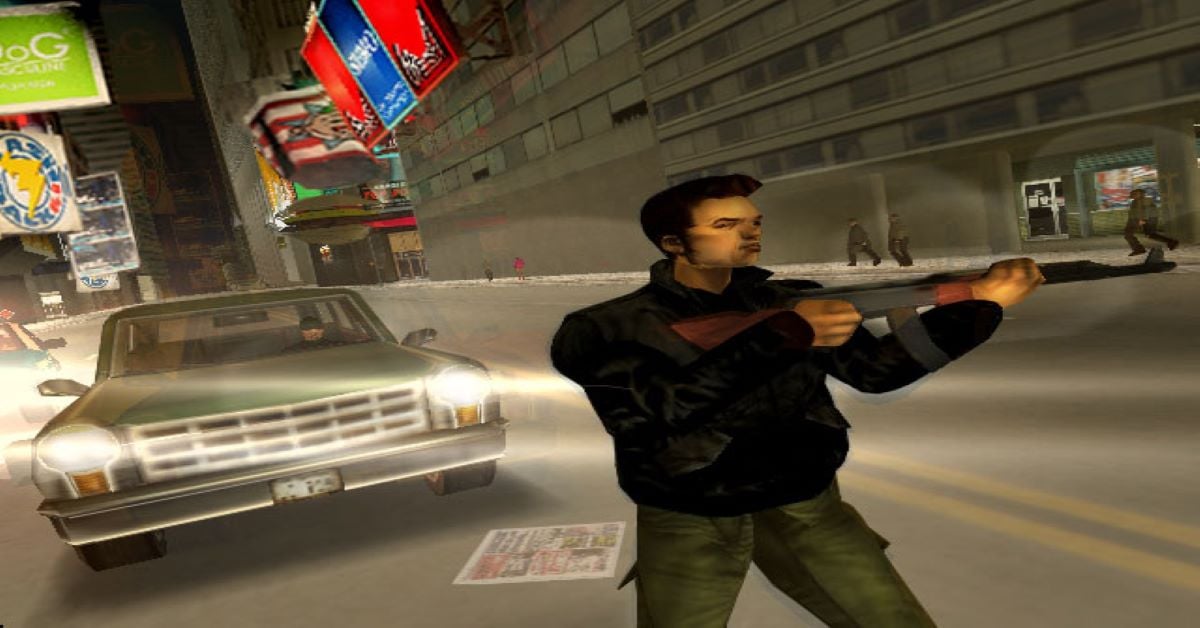 It’s autumn and the twentieth anniversary of Grand Theft Auto III (October 22nd) is upon us. Sadly, or perhaps inevitably, there might not be many singing happy birthday.

Rewind to fall 2001. The average PS2 owner is playing Gran Turismo 3: A-Spec, or possibly Red Faction, and along comes this magical disc that lets them explore a whole city. And not just explore it. Interact with it, do what they want with few constraints. It’s impossible today to replicate the thoughts of a generation of gamers spending their first few minutes in Liberty City; the wonder at seeing the various cars roaming the streets, the changing weather, and hearing the vibrant, amusing radio stations bringing them “all the songs you were tired of 20 years ago”. It must have felt pretty special. But GTA III wasn’t revolutionary for its open-world (Driver did that); it’s the level of detail that comes with it, plus the fact it was a driving and shooting title. But newcomers lacking any element of nostalgia will have to judge it by what it is today, and that’s slightly worrying.

Despite lifting the series into the 3D age, GTA III’s story is reassuringly one-dimensional. It’s the same rags to riches tale, the same errand boy (in this case, ‘Claude’) doing the dirty work of the crime bosses and drug lords. There are some neat missions, punishing and memorable in equal measure, but it’s generally a case of been there, done that. As for Claude, he’s not much of a talker; in fact, from start to finish, he doesn’t utter a single line of dialogue. Whilst not making him any less relatable, this does make him feel antiquated, not to mention a little weird, for more recent GTA players accustomed to hearing their protagonists cursing and shouting at every turn. The character development in general leaves a lot to be desired. Everyone remembers Sonny, the hot-tempered Diaz, and the backstabber Lance Vance from GTA: Vice City, or Big Smoke and the eminently hateable Officer Tenpenny from GTA: San Andreas, but it’s hard to feel as strongly about as many characters here. Some have potential, but short cutscenes, little dialogue and quick deaths mean they don’t get enough airtime. The primary antagonist only makes three or four brief cutscene appearances prior to the final mission. Contrast that with the final mission and epilogue of GTA: Vice City where most of the major characters are brought together in one big finale. The lack of character development is forgivable though, given that GTA III’s focus was on innovative gameplay.

What’s not so forgivable are the clunky controls, consisting of awkward, jittery movement in tight situations with a large margin of error. When making short movements from a standing position, Claude either moves too much or too little, which is especially annoying when near water which, incidentally, he can’t swim. The auto-aim is irritating and the ability to switch targets is slow or at times unresponsive. The player feels most in control when utilizing the few military-grade manually aimed weapons accessible only later in the game. Jerky controls were borderline acceptable at the turn of the century, but 2020s gamers used to smooth, cutting edge gameplay might not be as forgiving. And although these problems also plague GTA: Vice City (originally intended as a spin-off of GTA III), that game has so much else going for it. Another technical drawback is the absence of a map screen. The mini-map is there as always, but players had better remember the locations of the various pay and sprays and ammunition stores because, unlike in future titles, there are no icons for them. Then there’s the long save times, with the option to save or load the game appearing in unattractive, aggressive-looking red text. Color psychology is a thing, Rockstar.

The map is reasonably sized and bigger than that of GTA: Vice City, but infinitely less interesting. NPCs seldom deviate from their routine activities and although the subway terminals are packed, nobody’s using the trains apart from Claude. There are fewer random events and no enterable interiors besides several Ammu-Nation stores and – if you want to count it – a few lousy car garages. One thing that really hasn’t aged well is the limited number of character models wandering the streets. Technological limitations aside, today’s gamers won’t take kindly to seeing the same pedestrians over and over muttering the same lines on repeat. Time has also not been kind to the graphics, which is only an artificial drawback for those who prefer the glitz and glam of Vice City and San Andreas over the gloom and grey of Liberty City anyway, in both its 2001 and 2008 incarnations. GTA IV’s gritty, urban feel definitely had its plaudits though, but the Liberty City of 2001 feels dull and bland and, contrary to the sparkling ocean of Vice City, the water here is murky and unmoving. In terms of side missions and activities, Liberty City has plenty to offer for those who have the time. There’s hidden packages, a few easter eggs and even one or two unsolved myths, but a lot less than in, say, San Andreas. Forget city that never sleeps; this is a city that’s barely woken up – GTA stripped down to its most basic components.

One surprise is the sheer number of gangs that Rockstar managed to pack into this one dense area, from triads to mafia men, from yakuza to Colombian cartels. Whilst adding variety, it does make things a bit cluttered, and it’s probably why Rockstar went for fewer – but more fleshed out – gangs later on. Annoyingly, it also means there are relatively few districts where Claude’s not going to get constantly peppered with small arms fire. The hospital on the second island is smack bang in the middle of one such gang area, so that when the player respawns there they’d better find a pair of wheels fast or else go on an arduous hike through enemy territory. Also, part of the first island becomes virtually a no-go area when, following one mission, some of the patrolling mafia men become permanently armed with ultra-powerful pump shotguns that can destroy a moving vehicle in two meagre shots, making the ambulance and vigilante side missions there nigh impossible after a certain point in a playthrough.

The in-game economy is largely meaningless. Apart from two missions which require payment on the part of Claude in order to be attempted, there’s nothing to spend money on besides weapons and pay and sprays. And why even purchase more weapons if, following a six-star rampage and a heroic death at the hands of the cops or military, the player can simply reload their last saved game? Unless someone happens to be unusually honest or enjoys seeing the kill count on the – equally meaningless – stats screen go up. In GTA: San Andreas, there was plenty for CJ to spend his money on, from food to haircuts, and even gambling, while in GTA: Vice City there was the option to purchase properties. Money can also be racked up in GTA III by smashing other cars on the streets – a bizarre leftover from the series’ retro 2D roots. There’s just no incentive there.

Speaking of cars, they’re erratic and way easier to topple over than in future titles. Oversteer just a little on a corner or gradient and they’ll perform more rolls than an Olympic gymnast. Worse, the damage threshold is under-generous, to say the least and it’s necessary to come to a complete stop before hopefully having enough time to escape any explosion, which takes some getting used to for more recent GTA players accustomed to bailing out of moving cars in GTA V. Luckily, the blast radius is lessened here, but that also means less destructive potential for those so inclined. Causing chain reactions of exploding vehicles is one of the things that makes GTA fun, and while that’s still possible here, it’s a lot harder to pull off. Then there’s the enigma of the fan-revered Dodo, a small airplane which can be driven around like a normal car. It was never intended to fly, which begs the question why Rockstar bothered including it. Somehow, bugs (and a lot of persistence) allow it to get it in the air. Have fun trying to keep it there though.

GTA III is cool for historical purposes to go back and see where it all started, but not for much else. Yes, it brought a whole new 3D sandbox environment to the series that could be destroyed and traversed, but it was also the testing ground for that same environment, so there were always going to be negatives that would be ironed out or improved upon by its successors. We’d actually look at GTA III a bit more fair, if nothing came after it and the series ended there and then. Being the gamechanger that it was, that was never going to happen. Unfortunately, not many will be playing it on its twentieth birthday, and until it gets the remaster treatment, they probably won’t anytime soon.