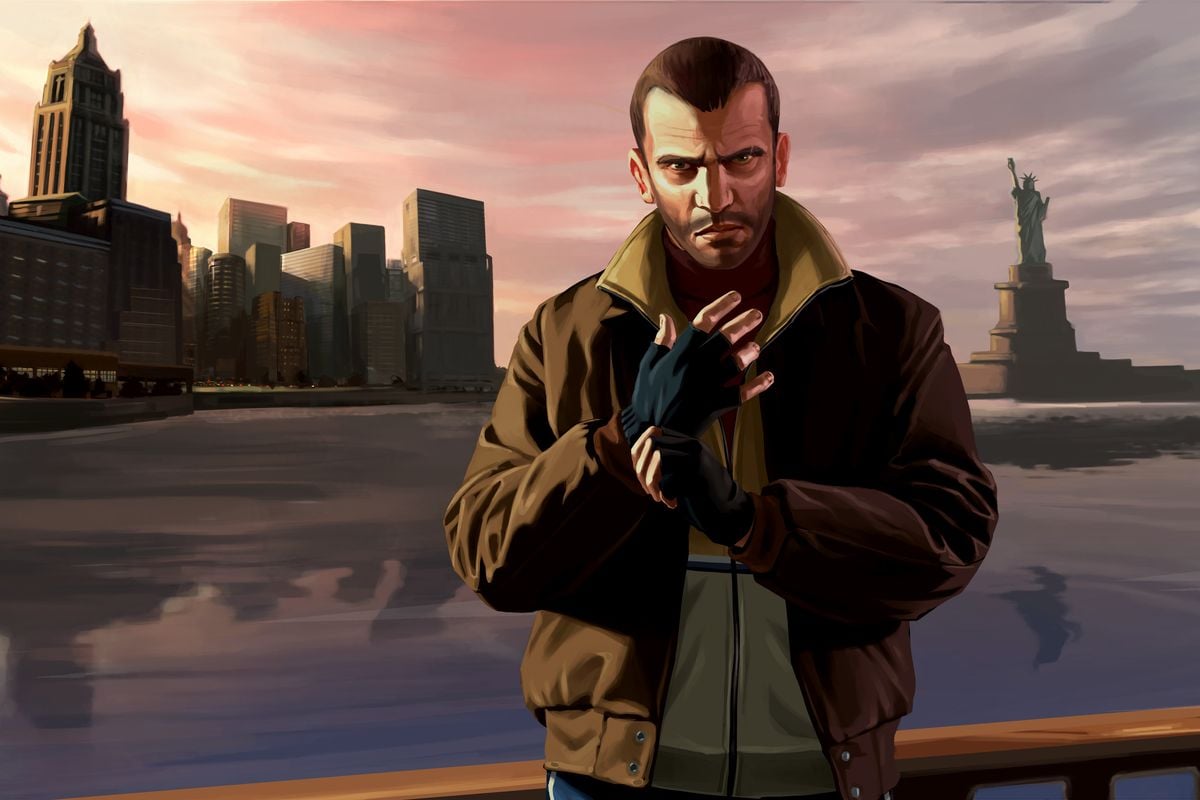 Grand Theft Auto IV– developed by Rockstar North, and released in April 2008- arrived just as I was ready to give up on games altogether. Years prior, you couldn’t pay me to do much else. My gaming story started when a family friend passed down his original PlayStation to me as he upgraded to the PlayStation 2. What followed was countless afternoons lost to Tomb Raider and Rainbow Six: Rogue Spear, despite being too young to digest any kind of narrative those games were trying to share. Between then and April 2008, my passion faded. I owned both the PlayStation 2 and 3, but my play-sessions were limited to a throwaway game of FIFA, or jumping in and out of Assassin’s Creed to bring deliverance to Templar soldiers- while exciting, it was no longer a healthy obsession I could pour hours into, but a short-burst of entertainment that was quickly forgotten.

Then, GamesMaster magazine ran a feature on a small indie named Grand Theft Auto IV. I had very little knowledge of the series prior to the article. A friend of mine owned San Andreas, but from what he showed me there was very little to it, other than if you mashed a load of buttons, a Hyrda fighter jet would spawn in the street. With this article and its accompanying screenshots, this seemed unlike anything else. The pictures showed dramatic lighting and film grain as a subway train rolled through an incredibly realized New York City clone. They showed a shootout between a man dressed in a caramel-beige tracksuit and police, bullet holes embroidered into the car doors, their windows shattered and smashed. They showed a high-speed chase cascading down an airport runway, as commercial jets were going about their business. They showed me where games were heading.

Grand Theft Auto IV’s launch coincided with my school’s Easter break, and so for the next four weeks, my life revolved around giving the medium another chance. As the introductory cutscene played, and the infamous Soviet Connection theme music pounded away at my television’s speakers, I realized that I had at once nothing and everything in common with its lead character, Niko Bellic. This is how games should feel to play, I thought to myself. With the cargo ship floating the American dreamers down through the lanes of the Hudson River, I too was entering New York City- Liberty City here- for the first time. That paradoxical feeling of absolute isolation and endless possibility only experienced when stepping foot somewhere unknown was being experienced not only by our Eastern-European antihero but by me.

The game goes on to tell Niko’s tale, a war veteran coerced into leaving his home in eastern Europe by his cousin Roman. Once there, Niko establishes very quickly that the penthouses and super-cars promised to him, are in reality, grotty condos and taxi depots, with very little sign of success or personal fulfillment insight. The only way to escape this never-ending cycle of mediocrity is for Niko to enter headfirst into the underbelly of Liberty City’s numerous criminal empires, and hope for the best. Not a situation I could relate to directly in the fact that I was a schoolboy living with his parents in the south of England, but Grand Theft Auto IV’s commitment to telling an ugly, unglamorous story of a human being trying to make a name for themselves when nobody was listening, was a narrative throughline I had never seen before, let alone played in a game.

As I progressed, it became abundantly clear that Rockstar’s world of Liberty City played just as important of a role as the writing. The more time I spent in the sandbox, the more I realized that the world-building that Rockstar has now become so synonymous with was what was missing from my other gaming adventures. Liberty City is, to this day, the most immersive game-world that has ever been developed. For its time, it was light years ahead of any of its competition, and it speaks to its quality that since then, so many developers have tried and failed to recapture that magic from thirteen years ago.

The towering skyline, grandiose avenues, and unique neighborhoods that I had grown up watching in films and television shows were suddenly my own to explore and discover. Whether Niko found himself surrounded by the neon-lit billboards of Star Junction, delivering justice to a disloyal drug mule in the projects of Northwood, or cruising the affluent streets of Middle Park East in a volt green Infernus, Rockstar’s creation both maintained and celebrated the distinct districts that New York prides itself in. While Liberty City is not the most populated of places, particularly by today’s lofty standards, its character and the stories told through its environment mean that it always feels alive and lived in.

Arguably the greatest compliment I could give to Grand Theft Auto IV was that it was always fun to play. Whether I was plugging-in for a lengthy, multiple-hour session, or just hopping on in between errands for a drive-around, playing Grand Theft Auto IV was a consistent highlight. In today’s market, developers working on projects of this scope are increasingly guilty of sacrificing entertaining gameplay, at the hands of a good story, or visa versa. Rockstar took that script and tore it up, marrying the two together in perfect harmony. But, much like the narrative, Grand Theft Auto IV ensured its gameplay was always rooted in some form of realism. Niko’s competence with weaponry is supported via his back-story, having served for his country in the Yugoslav Wars, though you never feel overpowered, nor overqualified. Each gunfight is scrappy and raw, with each 9mm round or shotgun shell fired at your victims — whether they be LCPD cops on the beat, or abhorrent Irish Mafia foot soldiers — carrying weight and meaning. All of this underpinned by the astonishing Euphoria physics engine, with characters reacting dynamically to wherever you hit them on the body, and is still used to this day in game design.

Why this game resonated so strongly with me and returned the spark and passion that I once had for games, was down to its litany of misfits and hotheads Niko meets along the way. Rockstar’s games have always shined brightest because of their characters, and this was no exception. While it is Niko whom the player spends the most time with, it is the paradoxical personas that surround him that steal the show: Little Jacob, a Rastafarian, spends his time preaching peace and harmony, despite trading in firearms to some of the most dangerous citizens in the country. Manny Escuela is a self-obsessed community leader, shooting documentaries in the poorest parts of the city to paint a falsified picture of humanitarianism and goodwill. Patrick ‘Packie’ McReary- my personal favorite- is a naive and youthful Irish spirit, who does not go a sentence without profanity, and someone who aligns himself with Niko’s pursuit of dominance in the city. Would I like to have known any of these people in my own life? Absolutely not. But this wasn’t my tale, it was Niko’s, and so all of these largely terrible people seemed a perfect match for the story that Rockstar was trying to tell.

Most of all, Grand Theft Auto IV made me feel seen and heard. With the story of Niko Bellic, Rockstar transported the player to an unrecognizable situation in their own lives, yet made you feel every step taken on Liberty City’s pavements. For me, it came at a time when games were fading out of my life, and that they were nothing more than a trivial pastime that had no place in the same conversations as films, television, books, and theatre. Now, as the fastest growing and most successful entertainment medium in the world, I like to think that it was this game that started to alter the conversation.

I have not even touched on the addictive multiplayer mode, nor have I delved into the two unforgettable DLC expansions: Lost and the Damned; The Ballad of Gay Tony). Grand Theft Auto IV upon its release made the world sit-up and listen, including me. It is a game that delivers on its vision, and although that may be one that is barbaric, and gratuitous, it is a vision nonetheless. If the recent rumors of a potential remastering of the game, updating its graphical fidelity and technical performance to align with today’s expectations are true, it would be nothing short of a pleasure to set foot on the docks of Alongquin once again.

Games That Changed Our Lives: Splatoon and Discovering the Joys of Competitive Shooters