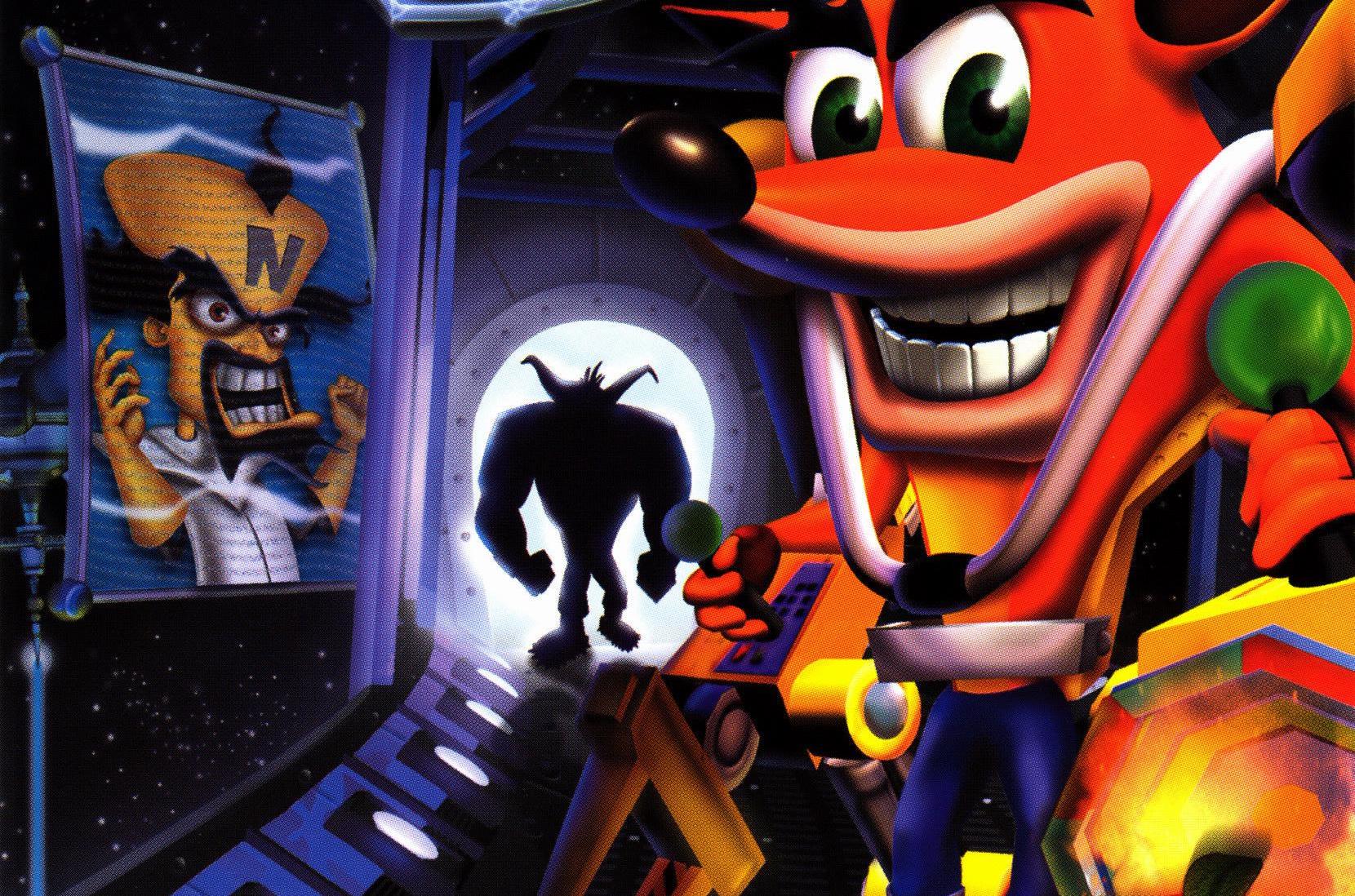 In the early build-up to Crash Bandicoot 4: It’s About Time, there was speculation that it might be a remake of Crash Bandicoot: The Wrath of Cortex. It made logical sense. The original trilogy got the makeover treatment, as did Crash Team Racing. But Toys for Bob must have taken one look at The Wrath of Cortex and decided to steer well clear, because in the end they decided to do their own thing, and it’s easy to see why. This is not Crash Bandicoot at its vintage best. This is mashed up, average-as-you-get Bandicoot hashed together at the last minute.

It’s About (Lack of) Time

Following 1998’s Crash Bandicoot 3: Warped, fans had to wait until 2001 for a mainline sequel. Yet the bog-standard installment that is today known as The Wrath of Cortex was originally supposed to be much different. Mark Cerny had his plans set on an open-ended, free-roaming take on everybody’s favorite marsupial, the envisioned title being Crash Bandicoot Worlds. Unfortunately, a dispute with Universal Interactive meant that Traveller’s Tales were forced to abandon the project and make a new game from scratch, and given just a year in which to do it. A good project turned to a bad one faster than you can say Uka Uka.

The story is functional if unoriginal, as Cortex, with a little forced prodding from Uka Uka, discloses his master plan to defeat Crash via a genetically altered super-bandicoot called Crunch who, like Crash himself in the series’ debut, is being manipulated to serve evil (what could possibly go wrong there …). Crunch’s power can only be unleashed through the medium of four animate masks called the Elementals: rulers of fire, water, earth, and air. Barring some lackluster facial animation, it sets things up rather well and replicates the simple yet successful plots of the originals, which weren’t exactly Shakespeare: Cortex devises evil scheme; Crash works against said scheme. For that same reason, it’s also glaringly uninspired. This was the chance to do something different and, for a title that’s a shoddy imitation of Warped, there’s no attempt at explaining how Cortex, Uka Uka, and N. Tropy escaped the pickle they were in at the end of that game – the very large pickle of being trapped in some hellish landscape.

After the cutscene comes the warp room and it’s as sterile as a hospital ward, the background consisting of green, Matrix-like squares like something from a computer terminal. It’s unclear if this is what the developers were going for or if they simply didn’t have time to spruce up a good one, and it sets the tone for the whole experience: bland, boring, underwhelming. The justification for making it another warp room-type scenario in the first place is rather flimsy. In Warped it was down to time travel, which also tied in with the new villain, Doctor N. Tropy, self-proclaimed master of time. But here it’s because the warp room’s a … virtual reality hub? It just seems like an excuse to do what Warped did.

The Wrath of Cortex does at least give fans a new set of – albeit temporary – villains: the Elementals. Cortex’s usual cronies haven’t done their job of squashing Crash to a pulp, so it’s up to these new faces (quite literally, as they’re nothing more than floating masks) to step up. Thing is, they’re completely and utterly forgettable.

That’s despite being voiced by a star-studded cast of voice actors including no less than Mark Hamill (aka Luke Skywalker) and Thomas F Wilson (Biff from Back to the Future). It’s difficult to know it’s them just by listening because the delivery is so tame. The boss fights are somewhat okay, with the exception of Wa-Wa’s, the Water Elemental, which is frustrating in a rage-inducing, controller-breaking kind of way. The one saving grace is Crunch. Gruff and overconfident, he oozes character and serves as a fitting main antagonist.

Seemingly as punishment for their past failures, the usual villains (Tiny, Dingodile et al.) are reduced to obstacles standing or flying in Crash’s way during the levels. It does change things up a bit and it’s interesting seeing them reduced to minor roles, not to say slightly amusing. That being said, they’re ridiculously easy to maneuver around. Tiny’s efforts at blocking Crash by moving repeatedly from side to side are half-hearted at best, while N. Tropy’s main job is to fire lousily towards the same patch of ground at fixed intervals with his pitchfork. They might as well be regular NPCs, and working out how best to fit them in seems like one of the questions that were left most unanswered by the rushed development team.

The majority feel rather empty and there’s a consistent lack of obstacles, and the ones that are there can often simply be walked around. The whole point of platforming, which the originals got down to a tee, is the inclusion of threats that have to be engaged with in order to progress. Also, level formats are supposed to reoccur and continuously ramp up the difficulty. In Warped there’d be, say, a basic tomb level and then a more complex version of that in the next warp room, but here it’s all chop and change. There’s level types which make only one appearance or which actually get progressively easier and whilst there are a few thrilling moments, in general they fail to maintain any sort of pace. Contrary to the fluid and fast gameplay of the original trilogy, everything here is very slow and laborious – Crash at walking speed. There is one fantastically designed masterpiece of a level, ‘The Gauntlet’, but it’s the exception rather than the rule. The poorest one is maybe ‘Medieval Madness’, and they’re worth playing back-to-back just to see the difference. Whenever there’s a jump from very good to very bad in the same game, it’s usually not a positive sign. On the bright side, Coco is a playable character, but her jump sucks, which is a problem because one of her levels (‘Banzai Bonsai’) revolves specifically around jumping.

The Wrath of the Vehicle Sections

The Wrath of Cortex packs in way too many, almost like it’s trying to compensate for a lack of decent gameplay in the core platforming. Over half of the levels feature some kind of vehicle. Over half. Among these are a minecart, a mech suit with dodgy aiming, and a submarine and a jeep for the underwater and race sections, recycled from Warped. Worst of all is the gimmicky flying machine (the ‘Firefly’) with cryptic lock-on missiles which makes one solitary appearance in ‘That Sinking Feeling’ and is thereafter scrapped. It’s just as well, because simply controlling it induces a sinking feeling. Traveller’s Tales may have been trying to stamp their own mark on the series with the added vehicles, but it just feels like poorly contrived clutter. The one exception is the ‘Atlasphere’, a ball in which Crash rolls around like a hamster, similar to Super Monkey Ball. It’s just a shame that the Atlasphere stages are among the emptiest in the game.

It’s not just the level design. There’s an abundance of technical shortcomings too, which might be expected for a major release that only spent a year in development. The original PS2 version is notorious for its long loading screens, which were later fixed on the Xbox and GameCube. Also, the warp room music doesn’t loop, which again only affects the PS2. Despite Crash no longer being Sony’s unofficial mascot, it does seem like a cardinal sin that the smoothest and most graphically pleasing experience of The Wrath of Cortex is to be had on the Xbox.

Platform specifics aside, there are severe framerate drops and an in-level camera that’s too zoomed in, leading to misjudgments in depth perception and not being able to see certain pitfalls until it’s too late. Meanwhile, in the game over screen, Cortex’s arm can be seen glitching through the surface it’s resting on. Shocking. In a way, though, the entire game represents a technical shortcoming. The sixth generation of consoles, and the step up from PS1 to PS2, was meant to be all about broadening the horizon, but instead Traveller’s Tales were forced to play it safe by churning out a shadowlike replica of the originals.

The facial models in those originals may have looked less crisp, but at least they were bursting with life. By contrast, in The Wrath of Cortex, Cortex barely lifts an eyebrow in the opening cutscene and has about a tenth of the facial muscles he should have. This also makes him seem like less of a villain. The between-level TimeTwister messages in Warped from the likes of Dingodile and N. Tropy were mildly sinister and made players genuinely scared to go up against them in the boss fights. But in The Wrath of Cortex, it’s all rather comical and expressionless, with Cortex coming across as a caricature of a villain and not the genuinely menacing one of Warped or Cortex Strikes Back. On the plus side, at least the characters look like the Naughty Dog versions, unlike in Crash of the Titans or Mind over Mutant where several are changed beyond recognition.

Traveller’s Tales may have been forced to rush The Wrath of Cortex to completion, but that shouldn’t stop anyone from critiquing what is a poor final product and which, like the Firefly vehicle from ‘That Sinking Feeling’, deserves to be shot down without hesitation for its downright mediocrity. Not only does it content itself with being a Warped clone, but it’s pretty bad at doing even that. Mercifully, Crash 4 with its whole multiverse thing would spare it from being retconned, meaning The Wrath of Cortex retains its status as canon. And rightly so. Good or bad, it’s part of the Crash Bandicoot everyone knows and loves.