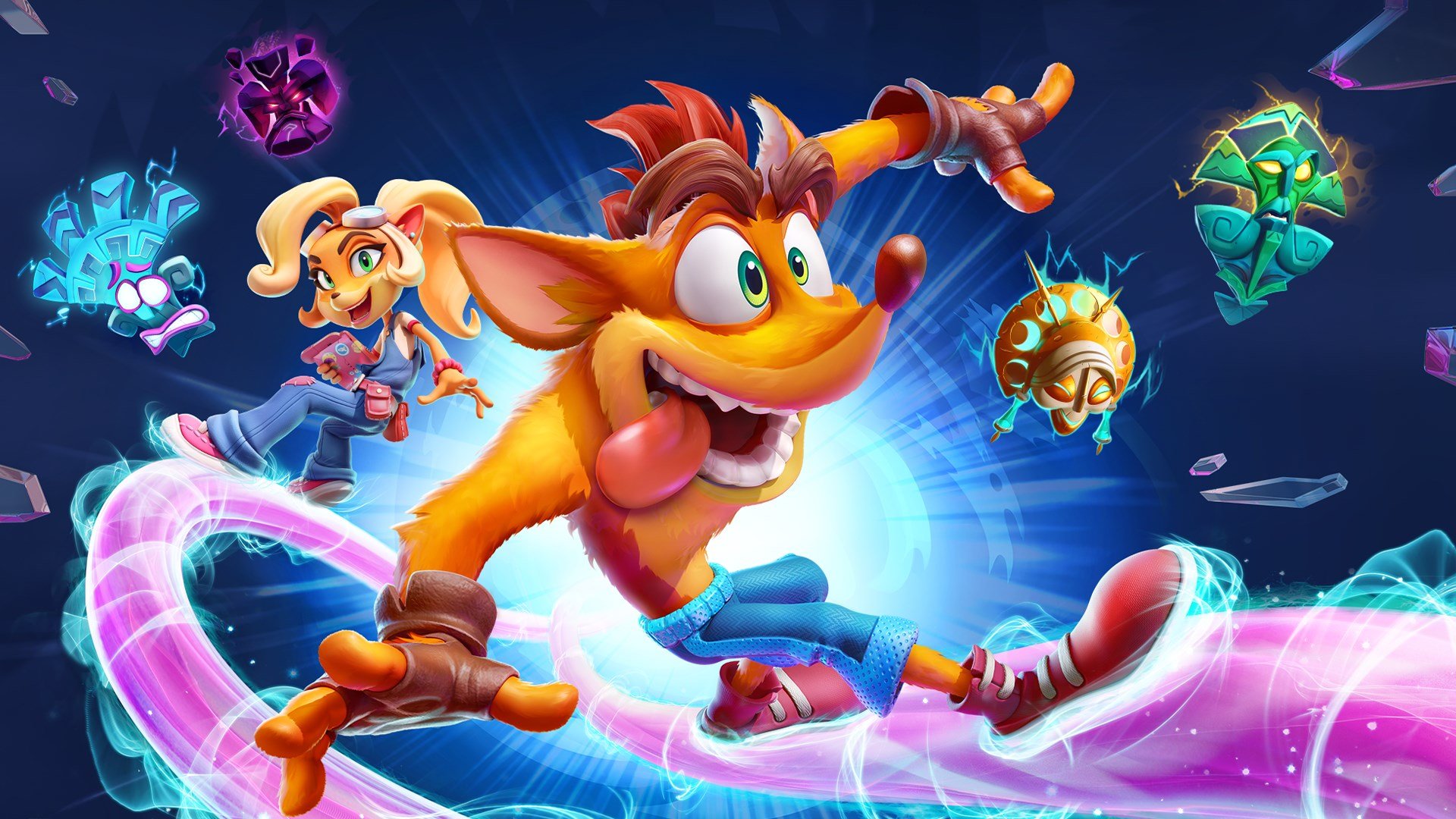 After Naughty Dog jumped away from the adventures of what once was the PlayStation’s groundbreaking marsupial mascot, Crash Bandicoot blundered through explosive trinitrotoluene crates year after year. Changing ownership and several licensing issues took a huge toll on the household name that Activision inevitably pulled the plug on altogether when the franchise’s last major multi-platform flop Crash: Mind Over Mutant hit the scene to little financial success. When the N’Sane Trilogy beautifully revived the cast of the Wumpa Islands, it was obvious Toys For Bob was going to be given the next big wack at the Bandicoot with the help of some of the IP owner’s subsidiary studios. It may have been announced and released out of nowhere, but Crash fans will spontaneously rejoice this year as Activision finally has perfected the titular mutated hero thanks to their lead developer’s tremendous efforts.

Taking place over a decade after Crash Bandicoot 3: Warped– and thankfully retconning every mishap that came out afterward- It’s About Time brings audiences back to the aftermath of Dr. Neo Cortex’s demise as the maleficent cast of villains were trapped with each other by Crash and Co’s efforts. Years of fruitless attempts since their rather anti-climactic final battle, the mustache twirly scientific foes at last break through the interdimensional barrier by utilizing the power of Uka Uka. The articulate Dr. N. Tropy devises a plan to — as you would expect with the series and say it with me now — conquer the universe through all sorts of evil dimensional and time travel means (hence the title), while the rest of the cast are off on their usual agendas.

The story of It’s About Time is of course no storytelling masterpiece or anything, but it gets the job done efficiently as it is able to actually add quite a bit of lore to the series as it carefully reintroduces a spunky cast of oddballs and newcomers with a rather slick landing. Nonetheless, at the forefront is of course the intricate gameplay and sparkly graphical showcase. Just like the original trilogy, Crash 4 entirely remains focused on being a challenging platformer with unique mini sequences sprinkled in every now and then to spice up the routine. It’s About Time wisely sticks to what it knows best as it continually aims to amp up the traditional challenge with exciting new trials and tricks rather than procedural genre-hopping like previous entries. The new batch of masks are this game’s main “gimmick,” but they are never used as quick distractions or excuses to do something different for the sake of having to. Each interdimensional floating face offers a decent amount of variety and a whole lot of new challenges that help add multiple levels of complexity to the already infuriating albeit iconic platforming design.

Rather than being something that is there once in a blue moon to shift the pacing, the masks are constantly intertwined with gameplay. This in turn not only provides plenty of variety for casual players but will give more to offer to any crazy completionist out there as many of the bonus stages and optional routes provide tough as nails courses to rummage through. Whether you are slowing down time itself or making different platforms generate out of thin air, each of the four different masks adds an element to the game’s core mechanics that is worthwhile and never underutilized. On top of the addition of finally some solid game-changing features, players can occasionally take control of Cortex, Dingodile, and Tawna for some exclusive stages that play out almost identically to Crash and Coco’s levels. The best-improved aspect of Crash 4 that other predecessors skimped out on, however, is definitely the base control scheme that has been properly optimized to a modern standard.

It’s About Time is quite literally a modernized blast to the past.

When the N’Sane Trilogy was previously released, many critics and fans felt that Crash and Coco’s movement felt a bit slippery and imprecise. The controls certainly were not as razor-tight as one would hope to see in a platformer title and while Crash 4 does not entirely reach a bar of one hundred percent satisfaction it indeed almost there. Not only has the game’s movement speed been adjusted, but the marsupial and his gang of allies have received plenty of upgrades inherited from past titles in the series including a slide, belly flop, double jump, and high jump. The best addition by far to the new control scheme is the optional yellow reticule that always remains under whichever character you play as. This may seem like such a simple addition, but it can be a significant helping hand during specific sections of the game where graphically it can be difficult to determine where you may land.

Speaking of, graphically the series has of course never looked better. Toys For Bob’s unique modern visual take on Naughty Dog’s classic formula continues to receive eye candy enhancements entry after entry. Whether it is a deep jungle or icy tundra, these lush environments are always packed with personality that puts the previous titles from the developer to shame, especially when it comes to being excessively detailed. On top of this, every animation is booming with personality, especially in that of our playable heroes and villains. It does not matter whether you are being beaten down or watching a cutscene because there is plenty of entertaining quirks to see in the cast. Crash in particular has so many notable animations that it is worth getting killed a hundred times just to see how he may react next.

One disappointing technical aspect of the game that is going to bug many players is the inconsistent framerate on base current generation systems. The developers have attempted to get Crash Bandicoot up to sixty frames per second, but that does not always pan out efficiently for original PlayStation 4 and Xbox One users. On PlayStation 4- the platform I reviewed the title on- I noticed significant framerate drops and minor sections that failed to hold itself above even thirty frames at times. This never made me miscalculate my jumps or pulled me out of the core experience, but once again these dips were definitely noticeable during the action-packed sequences and large-scale sections. Like the N’Sane Trilogy and Nitro-Kart, I’m sure Toys For Bob will look into patching up many of these issues to the best of their ability. For day one users, however, it is still a tad upsetting, to say the least.

On the content side of concerns, outside of the main campaign that contains dozens of collectibles to discover. like most other entries in the franchise, It’s About Time sadly does not have much to offer besides retro-themed flashback levels unlocked through VHS tapes and the Bandicoot Battle mode. While the unlockable flashback tape levels will pose a worthy challenge to veteran fans as it takes an interesting single spotlight on the various crates players face during Crash’s lab training days, the Bandicoot Battle mode feels like a last-minute addition that just literally made the cut. This speed-running time attack mode is barley worth a glance at unless you and a couple of your local fellow Bandicoot buddies want to test who is the most skilled player- something that might be hard to put together in this year’s environment.

After years of downhill tumbles and one recent mega-revival- along with a slick kart racer, Activision has finally hit every crate on the horizon and has grabbed the glittering crystal. Toys For Bob has created an outstanding Crash Bandicoot experience with their official continuation of the original Naughty Dog trilogy. It certainly holds a golden wumpa fruit to the games audiences and critics once cherished. Crash Bandicoot 4: It’s About Time is a title that will resonate with two audiences figuratively as the fan-favorite character flaunts his way back to the top with one of the best triple-a platformers in recent years. Toys For Bob deserves all the praise and I can only hope that Activision utilizes their brilliant talent going forward as they successfully prove that they can forge new great titles with the franchises the company has left sitting on the closet floor’s corner. The only place the marsupial and his friends will hopefully head is upwards to fame. The Bandicoot is truly back in all his acclaimed glory and it’s about damn time.