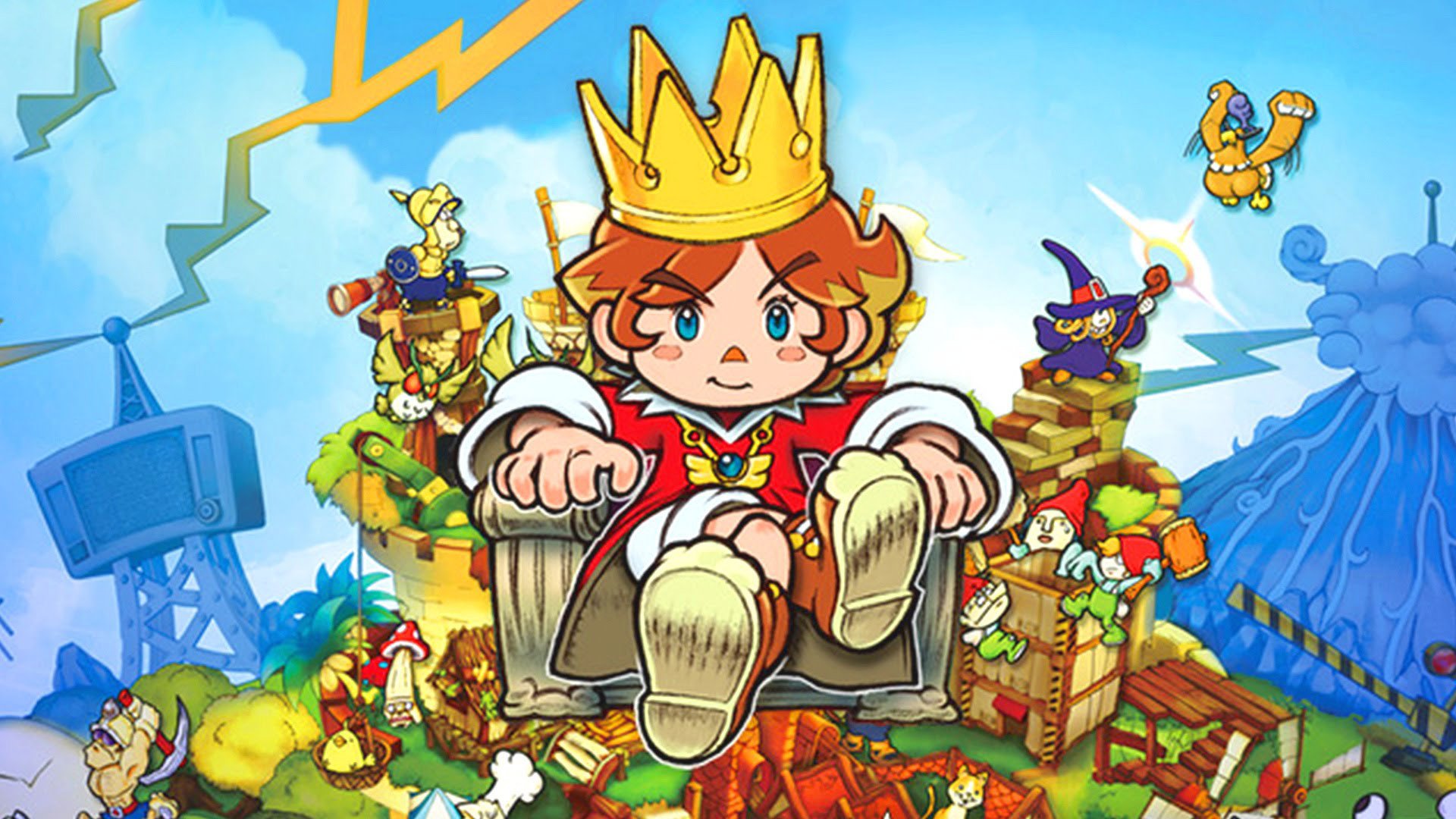 At first glance, Yoshiro Kimura’s Little King’s Story seems like a simple, cute strategy game where you take control of a small boy king who commands his citizens to find treasure, battle monsters, and grow his kingdom. That was certainly my initial impression upon receiving the game as a surprise Christmas present after vaguely hearing people talk positively about it around E3 2009. But after I spent more time exploring what Little King’s Story had to offer, I found that the game is much more than that. It’s an absolutely wild ride filled with surprising moments, dark and complex subject matter, and emotional resonance. It left a huge impression on me in my adolescence, and it’s an experience that has stuck with me ever since.

Little King’s Story starts off more or less how I expected it to. Beginning with little more than a run-down shack for a castle and a few blocks of land, the titular king has to employ his carefree citizens and put them to work to expand further. As I was battling turnip monsters, removing obstructions, and digging for treasure, I quickly grew accustomed to the simple, Pikmin-esque control scheme. I found the general mood and style of the game to be charming in their simplicity and lightheartedness, and even as I was battling the first mini-boss, a cow with a skull for a head, the upbeat rendition of William Tell Overture in the background reminded me to relax and have fun. Soon after beating the mini-boss, the kingdom threw a big festival over my accomplishment, and the game gave me an opportunity to sit back and enjoy the atmosphere without worrying about combat or treasure hunting. The game had exuded nothing but positive vibes up to this point, and I was led to believe that Little King’s Story was what I thought it was: a cute fantasy adventure.

It wasn’t until the day after the festival (in game time) when some of the title’s darker elements began to reveal themselves. Immediately after waking up, Howser, the king’s advisor, declares that his next goal will be world domination. Even at a young age, I was somewhat thrown off at having such a wildly ambitious and morally questionable objective thrust upon my lap after acquiring only a small piece of land. On top of that, when I left the castle, I soon met a kooky priest named Kampbell who essentially demanded that I build a church for him lest God punish me. Looking at the box art, one would be forgiven for assuming Little King’s Story was made with a younger audience in mind, so it’s all the more surprising to see the title portraying religious zealotry so openly. Despite these curveballs, the game progressed in a more or less conventional manner as the king continued to defeat mini-bosses to gain more territory. Eventually, I was tasked with taking on the first major boss, the Onii King. This fight also served to reinforce my early impressions of the game; fighting a bigger version of a standard enemy as a boss is a very common trope in fantasy games, and although I found the fight to be surprisingly challenging, it was nonetheless mechanically conventional. Finding openings to attack the boss, learning enemy tells, and dealing with distracting threats make for a boss formula that has worked for a long time, and it seemed like Little King’s Story would continue to follow that tradition.

After the boss fight and the ensuing festival, the game tasks the king with finding and defeating six more kings, and the gameplay loop continues as normal. But during this period of the title, I awoke one morning to tragic news. One of my soldiers, Alice, had permanently died in battle, and the church was going to hold a funeral for her by sundown. This came as a huge shock to me. Normally, when a member of the king’s troop falls in battle, the player can find them washed up on the kingdom’s beach alive and well, and the king can continue recruiting them as if nothing happened. But if that member falls one too many times, they die for good. As soon as I saw several of my citizens wearing black suits and top hats, as well as the news update informing me of the casualty, I felt awful. I knew that Alice’s death was entirely my fault; I took my troops and their supposed immortality for granted, and had I played a little bit more carefully, I could have easily prevented this from happening. It’s a situation that I genuinely never encountered in a game before, and it was another major clue that Little King’s Story may not be the simple, happy-go-lucky fantasy game I thought it was.

This notion was further challenged when I encountered the next two major bosses. The first of these, King Duvroc, is a drunkard who breathes fire and ice with every swig, and his wife calls and berates him for drinking after the player beats him. Conceptually, this is a much more bizarre idea for a boss than Onii King is, although the fight itself is still relatively conventional. It’s when I reached the next boss, Shishkebaboo, that the title truly went off the rails. This fight sees the player knocking around the rotund, sweets-obsessed Shishkebaboo like a pinball to burn his calories and get him small enough to fit into a narrow opening blocked by a rock. After burning enough calories and destroying the rock, I had to launch him toward the opening and into a giant fork to finish the fight. At this point, Little King’s Story dropped any pretense of being a traditional fantasy adventure. The Shishkebaboo fight demonstrated to me that the game is willing to abandon every game design rule in the book to provide a memorable experience. I remember getting really excited about the rest of the game after finishing this boss battle. I could tell that the game was done holding itself back by this point, and considering that there were several hours and at least four boss battles left in the campaign, I was left to speculate endlessly about what other surprises the game had to offer.

Sure enough, the adventure kept getting weirder and darker as I progressed. More characters started to question the morality behind my actions, and the king’s ministers grew more disgruntled with him. Many of the new enemy types I encountered were noticeably more bizarre and dangerous than before, such as the masked grim reapers and the Onii creatures that morphed into giant rolling spheres. Before the fight with King Omelet, I found myself navigating a hedge maze while reading notes detailing the life of an unknown individual who experienced depression and anxiety right up until his death. For one of the mandatory quests, I found myself going outside my castle three separate nights to speak with Shizuka, one of the princesses I rescued, who got abducted by a UFO on the third night and returned the next morning seemingly no worse for wear. And this is to say nothing about the title’s insane twist ending that re-contextualizes the entire experience and holds nothing back in terms of dark imagery and implications.

These off-kilter elements grabbed me in a way few games managed to at the time or since. Little King’s Story is essentially about a kid living a fantasy, and these elements really add a layer of unease into that fantasy. Some of them seem to exist purely to accentuate the title’s quirky tone, but others seem to challenge the kid’s desire to live out his dream with the uncomfortable uncertainties and fears associated with growing up. Even the music seems to reflect this; during this part of the game, the kingdom’s theme shifts from a jovial piece to one with a slightly more melancholy tone, which seems to suggest that as the kid gets closer to reaching his dream, he starts to see how uncomfortable and scary life can truly be. All of these elements really resonated with me even though I couldn’t describe them when I first played the game.

This escalating insanity is further highlighted by how unconventional the later bosses get. Much like with Shishkebaboo, these fights subvert expectations on what a boss battle can be. Little King’s Story has no qualms about turning a mountain climb or a geography test into a boss battle, and unlike other titles which may include an unconventional gameplay section as a quick diversion, it explores these ideas to the fullest. Fights can take anywhere from 10 to 20 minutes to complete, and they constantly introduce new scenarios and twists to keep players on their toes. TV Dinnah’s geography battle in particular struck a chord with me when I was younger. Being quizzed on real-life locations while watching out for carpet bombings, falling kitchen knives, and giant baseballs was unlike anything else I had ever experienced in gaming, so much so that I would spend long stretches of time describing this boss battle to friends and family just to give them an idea of the madness I had witnessed. Encountering Jumbo Champloon for the first time was another highlight. Being a literal pile of junk, Champloon assaults the player with giant crayons, chicken lasers, and other random objects while an absolutely infectious rendition of Infernal Galop plays in the background. Taking on Champloon was an indescribably euphoric experience, and my appreciation for him only grew when I realized he served as a clue for the game’s big twist. The boss battles definitely left the biggest impact on me when I was younger, and they really opened my eyes to what boss battles, in general, were capable of.

Despite how much I adored my initial playthrough, I did not touch the game again for a long time. Yet I would always think about the fond memories I had with it, and would often get into long discussions with my brother about how weird the game was. Years later, soon after COVID-19 started to keep everyone indoors, I found the perfect opportunity to pick the title up again and give it another go. Once I did, it all came back to me. The endearing characters, the quirky dialogue, the bizarre moments, the dark themes, all of it enraptured me just like it did over a decade ago. I rediscovered just how intricate the AI routines of the citizens are as well as how many hidden mechanics, quests, and lines of dialogue can be found. I ended up researching more about the title and how much thought director Yoshiro Kimura and his team put into nearly every aspect. When I finished that second playthrough, I couldn’t help but stare at the title screen and get emotional over the whole experience. If there was any doubt in my mind that Little King’s Story is one of my favorite games, that doubt quickly dissipated, and I will continue to remember it fondly long after my Wii disc rots.