Which game is superior — one that delivers a variety of decent experiences, or one that delivers a singular, exceptional experience? In essence, do games benefit from appealing to a wide audience? This largely depends on one’s goals. If a game is meant to maximize its profits and break sales records, then appealing to a broader audience is the obvious choice. However, if a game is meant to masterfully execute a vision born of passion and creativity, tighter focus tends to be more feasible. This article uses Dragon Age: Inquisition as a case study in order to explore this idea. Essentially, Inquisition shows that attempts to incorporate numerous systems in one game, while capable of producing considerable short-term benefits, pose a threat to a game’s longevity and overall quality.

All that said, what are Dragon Age: Inquisition’s gameplay systems? Hoo boy. There’s the hack-’n-slash combat with cool down-based abilities, the top-down tactical layer to combat, the dialogue wheel, the fetch quests, the war table, the shards, the connect-the-dots constellation puzzles, the treasure maps… and more besides. Sadly, many of these systems are largely forgettable, and because time and resources are devoted to them, core gameplay elements suffer.

The two halves of combat are engaging enough, but they never really gel together like they should. Ideally, easier encounters should be an opportunity to focus in on the Inquisitor, to feel like the hero for a bit, tearing through enemy minions with glee. Then, harder encounters would force players to engage with the tactical side, treating each party member like a cog in a well-oiled machine. But the difficulty doesn’t feel fine-tuned enough to marry these two systems. Worse, the controls on the tactical side of things feel unpolished. Characters can be difficult to wrangle, and the camera often has a hard time coping with the quirks of the terrain. This is a shame, considering the fact that strategizing and commanding the party is actually quite fun, especially in moments where one can take advantage of choke points in the environment. Having more adequate control over the tactical side of things would alleviate a considerable amount of frustration.

Even more frustrating is the prevalence of bugs in Inquisition. Bugs can lead to minor disappointments–a mini-boss in the Hinterlands was content to do his best training dummy impression as he was riddled with quarrels and frost bolts, leading to his ignoble death. They can also cause greater aggravations–a climactic encounter with an Envy Demon was undercut when a cutscene failed to trigger, forcing a replay of the entire boss fight. So if core gameplay suffers because resources are stretched too thin, why do the stretching in the first place?

The lead writer of the Dragon Age franchise, Patrick Weekes, has an answer. In a 2015 interview with PC Gamer, Weekes had this to say: “When you’re talking about agency, you’re talking about how you’re trying to put yourselves in the shoes of various types of players… the power gamer, the completionist, the guy that wants to search out the story. You’re trying to put yourself into various mindsets at the same time.”

However, the team didn’t seem fully equipped to address each of these player archetypes. After all, if a completionist has to slog through endless, bland fetch quests, there’s little to prevent them from switching to a game with more compelling side content. Former Dragon Age creative director Mike Laidlaw seemed to realize this, at least partially, in the aforementioned interview.  “We underestimated, to some degree, the completionist drive. It was possible, as a completionist, that you could damage your own pacing.” It’s a realization of a somewhat unintuitive lesson: players don’t always act in the interest of their own fun. Many are compelled to find optimal strategies in combat, or to fill out every bar in the game. Even if these optimal strategies or bar-filling activities are boring, some people will be compelled to seek them out nonetheless. Thus, it’s important to avoid giving players the choice to hamstring their own enjoyment, if at all possible.

Amidst all of these negatives, it is important to remember that Dragon Age: Inquisition is a good game. It’s (mostly) well-written, filled with exciting encounters, and it offers compelling dilemmas for the player. Furthermore, Thedas is a remarkably fleshed out world, populated by a diverse, interesting cast of characters. This quality is reflected in the game’s initial reception; its Metacritic scores across different platforms all sit at 85 or above, and commercially speaking, Inquisition is one of BioWare’s most successful launches. However, this success was not particularly enduring, and BioWare seems to have failed to internalize some important lessons. 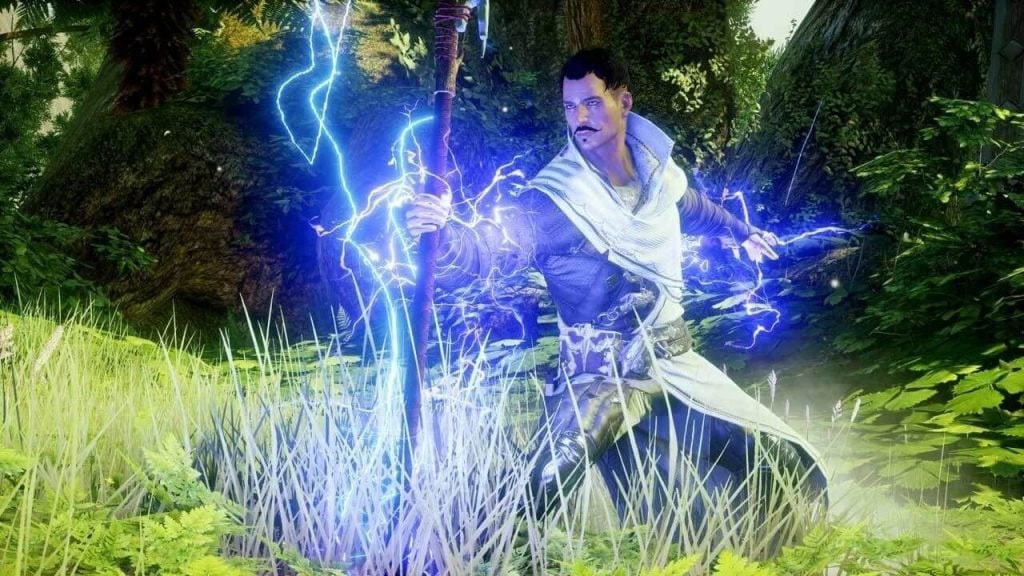 While being critically praised at the time of release, Inquisition’s place in the public consciousness has largely been usurped by The Witcher 3: Wild Hunt–so much so that BioWare tried to learn from Wild Hunt’s success when developing Mass Effect: Andromeda. They took one step forward by attempting to cut meaningless filler, but took two steps back by failing to narrow their scope or tighten their focus for Andromeda. In fact, there were plans to include hundreds of explorable, procedurally-generated planets in the Mass Effect sequel, an idea which was scrapped late in development and may have contributed to the game’s overall lack of polish. Notably, Andromeda was a considerable setback in terms of critical reception when compared to Inquisition. It’s not hard to see how the mentality of trying to be many things at once persisted past Inquisition and caused major problems for Andromeda.

Overall, BioWare stretched themselves too thin. Too many systems drew resources away from vital tasks: fine-tuning the difficulty to encourage swapping between combat styles, polishing the controls on the tactical layer, and ironing out encounter-ruining bugs. So what should have been done instead? Was the problem really having numerous gameplay systems? Yes and no. Really, the problem was that these various systems didn’t fit together to make a greater whole. There are plenty of games with interconnected systems which are a triumph — the XCOM remakes and the Total War series come to mind. In the latter case, everything from settlement management to diplomacy has a tangible impact on the central gameplay conceit: huge, Lord of the Rings-esque battles played out in real time. Inquisition might have benefited from a similar approach.

But really, the answer is simpler than that. BioWare should have played to their strengths. More specifically, they should have played to the strengths of the Dragon Age series. Dragon Age isn’t about collectibles. It’s not about fetch quests. It’s about story, and world-building, and choice, and character. And to be fair, this series has always had trouble recapturing its identity. Neither Dragon Age II nor Inquisition serves as very effective sequels to their progenitor. But maybe Dragon Age IV will buck the trend. Maybe BioWare will regain their focus and return to their Origins.

Brandon Curran was born in a damn desert before being spirited away to the arboreal paradise of Portland, Oregon. He likes grey skies, green trees, and a steady mist of rain. When he's not writing articles about game design, he's working on that book he's totally gonna finish. In his spare time, Brandon plays video games, paints miniatures, and mutters to himself