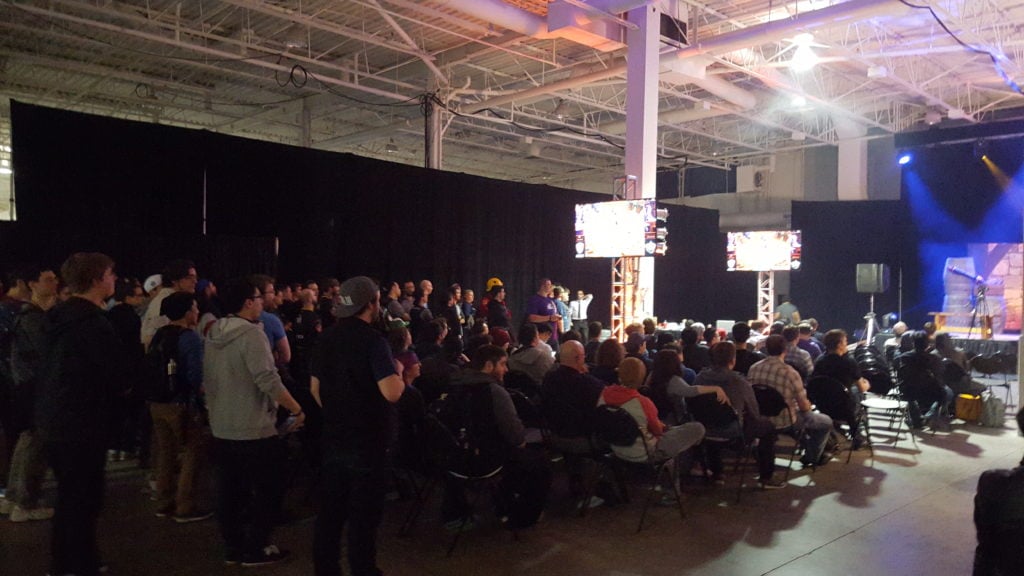 As I arrive at EGLX, the first thing I notice is that the show’s doors have been open less than an hour and the venue is already packed and buzzing with the frenetic energy of a thousand Red Bull drinkers. Eager attendees begin filling the aisles, spreading out over the numerous merch-tables (naturally the booths demoing games fill up first). I scan the venue, making note of the make-up of the crowd. While the cultural diversity is on par for a Greater Toronto Area event, there is a definite age and gender bias. The crowd is predominantly male and in their early twenties. Most of the attendees over fifty are here with their young children or working the event.

There is a slick looking gaming lounge near the venue’s front doors. Rows of Xbox One stations are lined up two by two, with gamers swapping in and out for some competitive multiplayer action. What I see in the gaming lounge can’t help but make me smile. The myth of the slack-jawed gamer staring into a screen like a zombie simply doesn’t fly here. The area is full of chatter as players casually sit back with huge smiles on their faces, enjoying conversation with their pals as much as what’s on onscreen.

Off to the side, a couple of EGLX volunteers unwind on leather couches, chowing down on pizza and sipping energy drinks. While the volunteers already have the bleary eyes of ER doctors pulling double shifts, one of them jumps up and runs over to a console player to get a better look at his outrageous kill streak. It’s a throwback to the pre-internet days of arcades when bystanders literally had to look over another player’s shoulder to learn all the cool new tricks.

Groups of young men saunter through the crowd wearing colourful matching team jerseys, no doubt sniffing out the competition. As two teams cross paths, one man seemingly recognizes a competitor and stops to do a double take. His teammates circle around asking who he saw in high tones betraying the cocksureness they flaunted just moments before. “Nothing,” he replies, “it was just a bunch of rand-o’s.” They laugh it off as though they weren’t worried seconds before and continue on their way.

A respectful fear of one’s opponent is commonplace in e-sports. Competitive gaming is a thriving community; the top teams spend hundreds of hours training with their teammates and dozens of hours scouting the competition. Players become extremely familiar with their competition, combing hours of footage on streaming services like Twitch and YouTube in hopes of gaining a slight edge. While many of these young men and women are anonymous to the general public, on the EGLX floor, they’re LeBron James.

EGLX’s showroom is filled with all the “Con” staples: fandom themed merch-tables, an artist alley, and cosplayer booths. To my left, Game of Thrones bobble heads flank stacks of Gundam model kits. Before the overburdened cashier asks, if he can help me with anything, I notice a Doctor Who Monopoly set over in the next booth and I’m off. As I make my way over to check out the price something remarkable catches my eye. Cthulhu Monopoly? I want to talk to the people that licence these things. I haven’t been at the venue an hour and I realize I’m on pace to clean out my bank account, so I head straight over to a competitive gaming area. 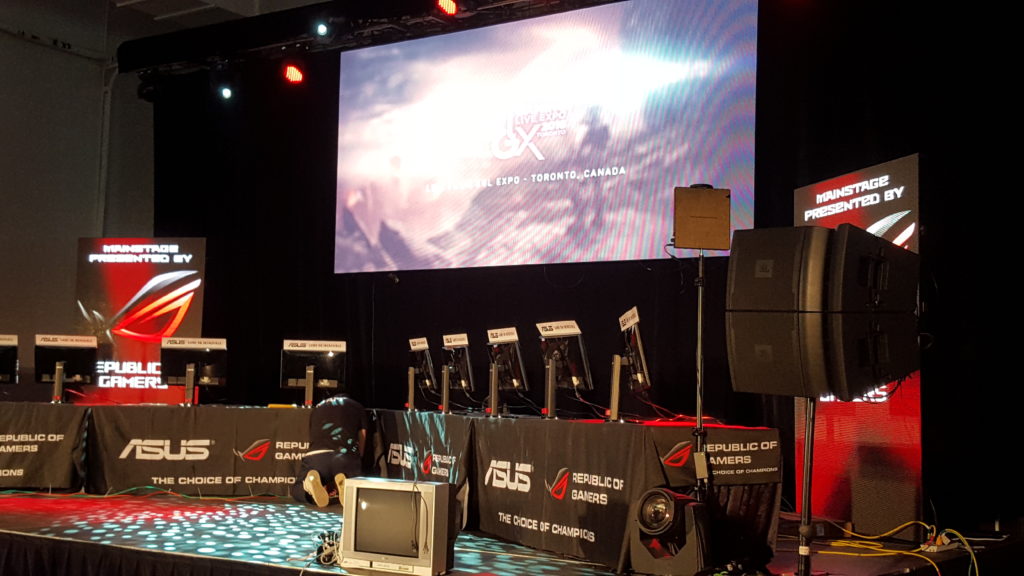 I make my way over to one of several competition areas. It’s 30-minutes before kick-off and already more than half of the seats are filled. At the front of the room is a stage about the size of what’s in an average high-school auditorium. On the stage is a table with a computer monitor where the combatants will sit with their backs to the crowd. While the competitors don’t have to make eye-contact with the crowd, a camera hangs back several feet in front of them, projecting their faces out to the world via a live stream. The audience watches the event unfold on a giant screen above the stage. The upcoming match will feature live commentary, which will run through a pair of basketball net sized speakers flanking the stage.

The energy in the room starts picking up as the latecomers claim the last empty seats and people jostle around securing their position on the sidelines, guaranteeing decent sightlines for the match. Sitting next to me is a young man named Dexter P. He travelled all the way from Nova Scotia to compete in EGLX. Dexter is a Super Smash Bros. 4 player and plans to compete over the weekend. I asked Dexter what drives him to show up 30-minutes early for an e-sports match.

“I’m excited for Nairo,’ he replied, “I’m a subscriber to his Twitch channel. He’s a really good player. A nice guy, and a funny dude. He’s really entertaining to watch overall.”

Nairo is one of the top-ranked Super Smash Bros. 4 players in the world. As Nairo takes the stage, a flock of people pulls out their iPhones and dole out the paparazzi treatment. I can see that Dexter isn’t Nairo’s only Twitch subscribers on hand.

Nairo is facing off in an elimination match against a team of five top Canadian players. Nairo will receive 10 lives while his opponents get two lives each, with the two sides duking it out until only one remains. E-sports players are serious competitors; they spend thousands of dollars on the best equipment money can buy just to gain the slightest edge. I wasn’t surprised to see each player carry their own well-worn controller up onstage. I was surprised seeing Nairo taking the time to warm up before the competition.

Once the competition begins, Nairo stays as cool as they come. While Nairo’s opposition tenses up, stomp their feet, and shake their heads, he barely flinches. Maybe the competitors don’t pose as much challenge, or maybe, Nairo’s skills are so transcendent that he sees the game in Matrix-like strands of green code (I choose to believe the latter). Nairo cuts through competitor after competitor. Surprisingly, the crowd is just as subdued. Perhaps the gamers amidst the crowd are too busy gleaning knowledge from the master while he works. Once the dust settled, Nairo had wiped out the competition with 21/2 of his lives still remaining. 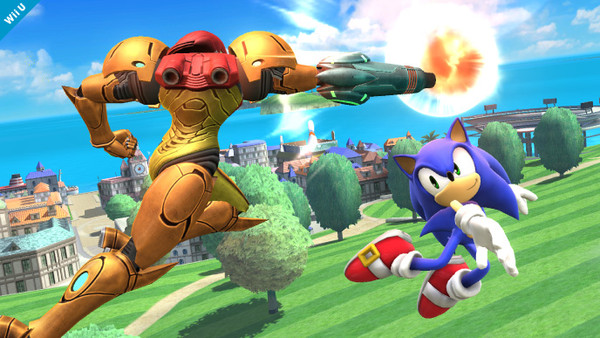 The notion that gaming culture is insular and gamers are inherently antisocial should have gone extinct with wired console controllers – but it hasn’t. The most exciting aspect of EGLX is how the event shines a spotlight on gaming culture and illuminates a healthy, highly socialized, thriving community. Familial bonds are routinely cultivated online amidst Call of Duty matches, and many lifelong friendships were solidified on tattered old couches during Goldeneye death matches.

Gamers hold the same controllers; use on the same hardware, and play games written in the same code. Fighting through the same cyber-trenches transforms gamers all across the globe into a battle-tested band of brothers and sisters. I’m looking forward to coming back to EGLX and participating in an event that places gaming culture’s finest aspects up on a pedestal for the world to see.