Do not go where the path may lead, go instead where there is no path and leave a trail.
— Ralph Waldo Emerson

Sometimes you don’t really have a choice but to forge your own way, and so what? Square Enix didn’t feel the need to fill in the blanks when it came to merging the eight different personal stories at the heart of their latest RPG hit, Octopath Traveler, and frankly, I have no problem with that. Sure, it may seem weird to some of you that eight people of different ages, genders, and economic backgrounds have almost nothing to outwardly say to each other about their individual missions of revenge, adventure, ritual, atonement, and more revenge, simply expecting help without the slightest hint of loyalty or friendship (or even chit-chat), but it’s that silence that intrigues me most.

Growing up in the NES and SNES eras meant bonding with characters often through elaborate cover art and odd instruction manual prefaces; you got used to making up a lot of the proceedings yourself, despite the occasional awkwardly translated dialogue boxes. Clearly, Octopath is all about nostalgia for those good old days, giving those of us who remember a look back through rose-tinted glasses — and what better way to bring back memories of my video game childhood than by making me use my imagination?

Yeah, the game’s designers could have programmed a plethora of robotic subplots about young romance, with a nice lad named Alfyn innocently pitching woo to the feisty and girlish Tressa. Or they could philosophically expound on the nature of combat, having stoic hunter H’aanit argue with even more stoic warrior Olberic over how to most honorably kill things. Perhaps Therion the cocky thief will discover the benefits of compassion and charity via some fireside chats with Ophelia’s pure-as-snow cleric. And maybe the snooty Scholar would eventually see past the outward appearance of the proud Dancer, resulting in a mix of Pretty Woman and Aladdin-type scenarios, and then — well, then I kind of stop caring anymore.

The personal tales included in Octopath do just fine getting these eight companions from place to place, spelling out goals in typical video game fashion — why include even more exposition? The omission of direct interactions actually creates some nice open-ended mystery to characters and stories that are otherwise pretty straightforward. This allows my mind to wander a bit when filling in the blanks, and it’s an enjoyable feeling I haven’t had for a very long time. 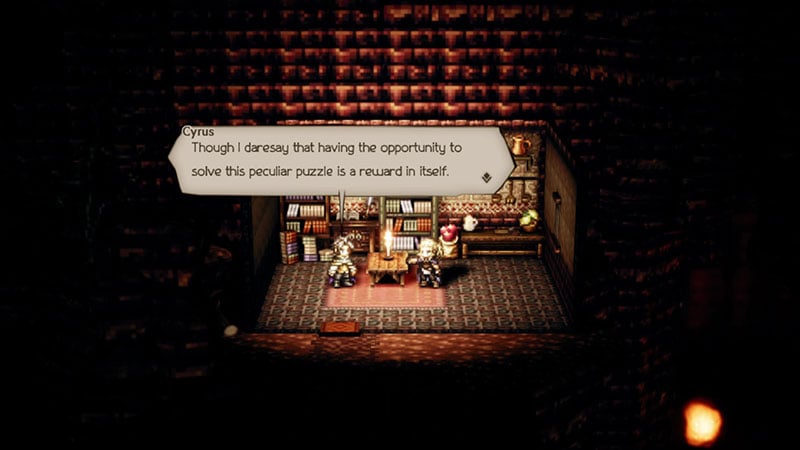 In an ensemble piece, players are naturally going to gravitate to certain characters over others, but writers hate that; they often want us to like every hero they have taken so much time to create, and they’re willing to compose endless monologues to accomplish this. So, we’re often forced to listen to people we find boring (or worse) prattle on about whatever they consider being important in their lives. For this very reason, the all-important story is often make or break in RPGs, but Octopath Traveler dares to be at least a little different, mercifully sparing our favorite heroes from having to pretend as if they actually like some of the idiots they’re fighting beside. Players are given the chance (and choice) to come up with group dynamics that suit how we see things; it’s a role-playing game that lets its audience play a role in something other than button pushing.

I completely understand if there are those who would prefer a more passive experience, but if you’re like me, you’ll definitely make the most of this approach. After spending a decent amount of time with everyone, small asides began to pop into my mind, expressing my attitudes and storytelling tendencies through the avatars up on screen. Here’s how I see this Octo-Group:

1.) First of all, no one likes Therion. They think the guy is a total ass, from his dumb loner attitude (that he clearly abandons the moment help is offered) to his douchebag voice; the mere sight of him inspires the gritting of teeth. Naturally, they talk about him behind his back — Olberic thinks he’s a poser, Tressa is horrified at his anti-merchant ethics, and H’aanit has casually mentioned hunting him. Because of this disdain, the party forces him to sleep outside of camp, separate from the rest so as not to spoil their slumber or morning appetites. No one buys his faux-edginess brought on by some ho-hum past twisted into melodrama; he’s allowed to accompany the party simply because he has a knife, and sometimes they need a knife — that’s it. 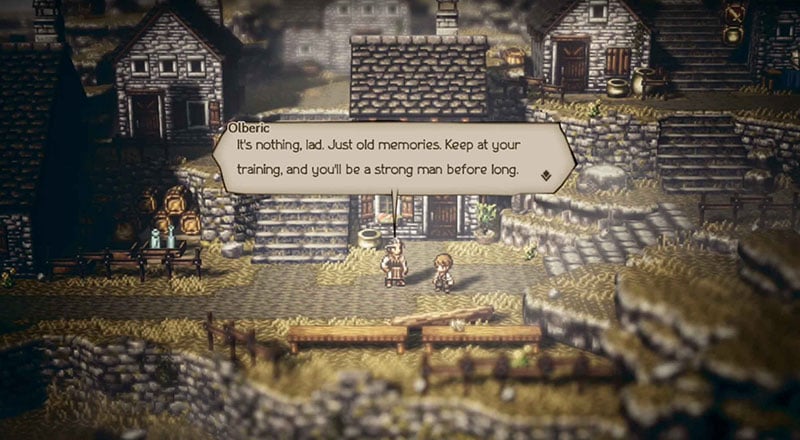 2.) Olberic and Tressa totally have some kind of father-daughter thing going on. Both left behind a family or a surrogate family, and have need to fill the psychological emptiness. The fallen knight had a budding mentorship with a young boy in his village — teaching him to kill, of course — but doesn’t believe he can measure up in the other ways a father should (we can leave his relationship with the mother for another discussion). Meanwhile, Tressa is clearly a daddy’s girl (her Midwestern-accented mommy seems to be kind of a killjoy), striking out on her own to prove her mettle as a merchant, yet still drawn to Olberic’s authoritative guidance and approval. And one day she’ll get him to smile! I started with these two as my first party members, and I still see them as the perfect team — like the Terminator and John Connor.

3.) Somehow, against all odds, Alfyn and Primrose have begun flirting. Well, she is anyway; he just gets really embarrassed. I know, you think the fiery Tressa is better suited to the wholesome young apothecary, but hear me out. Opposites attract, and you couldn’t get much more polar than a country bumpkin with a sunny, adventurous disposition full of hope and rainbows, and a former wealthy debutante turned exotic dancer/prostitute with a self-destructive outlook kept at bay only by her hell-bent obsession on revenge. He’s shy and naive, she’s assertive and educated — the perfect fit! I see them genuinely curious about each others’ former lifestyles, like a fantasy away from all the current killing. He gets to hear stories of fancy parties and high intrigues while talking to someone way out of his league, and she gets brief respites from her dark memories with charmingly simple tales of ordinary folk. It could totally happen. I mean, he’s kinda almost a doctor, right?

4.) Cyrus feels the need to show his prowess in physical battles in front of H’aanit. Not because he’s romantically into her or anything (if you’ve played the game, you know Cyrus is a total idiot when it comes to human interaction that doesn’t involve a book), but because H’aanit is actually incredibly learned, with a knowledge of history passed down for generations by her village elders. Possibly the most philosophical of all the Octopath travelers, H’aanit is also an accomplished naturalist whose spiritual and intellectual positions have been formed by practical, real world experience — not created in the sterile bubble of a detached university. In other words, Cyrus is completely jealous. While he tries to interest the others in his academic rambling, they are more drawn to the quiet wisdom of the hunter who knows what the scholar can only hypothesize. Therefore, to balance the scales and salvage his wounded pride, he hits monsters with his staff. 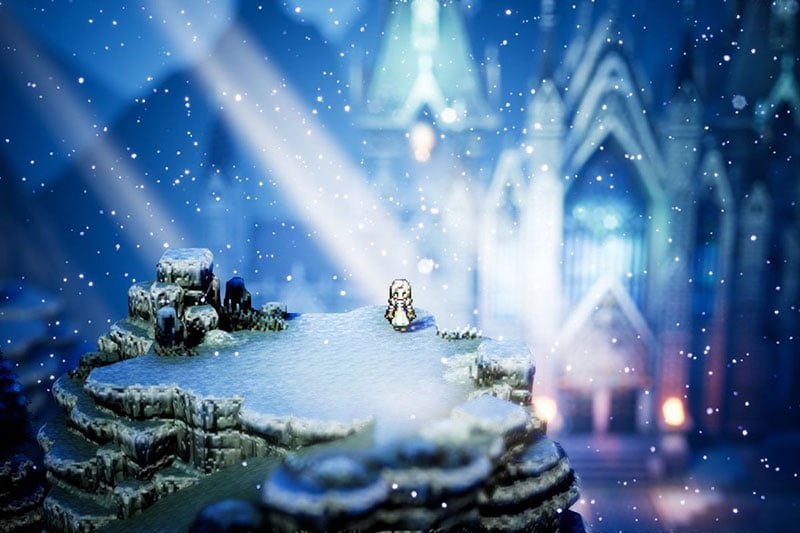 5.) While perfectly pleasant and endearingly genuine, Ophelia makes everyone slightly uncomfortable. Not in a way that makes them dislike her, mind you, but in a way that makes them feel guilty about their own lives. I mean, the girl might as well be an actual angel, bathed in light and descended from above — that’s got to be intimidating. She’s kind, steadfast, helpful, a voice of calm, never swears, and doesn’t ever pass judgment on all the misfits she’s teamed up with (at least out loud). How do you live with that? Olberic has killed too many people to look her directly in the eye, H’aanit is clearly a savage pagan, Alfyn loves drugs, Tressa is all about the Benjamins, Cyrus desperately wants to debate religion but knows he’ll get his ass kicked by the others if he even tries to bring it up, and Primrose is an expert on…well, let’s just say it’s getting more and more awkward for her to evade answering, “what’s it like?” It can get weird around the campfire when Ophelia wants to hear stories, but flaws are what make us human, people.

Except for Therion. He’s just a colossal ass.

Anyway, with all this drama going on behind the scenes, who cares about party chats? It’s okay to sometimes leave video game stories to the imagination, even in a 60-hour RPG. The scenes that play out in my mind as I guide these weirdos through their epic adventures are likely far more entertaining to me than anything Square would come up with, and produce a more endearing bond with characters. They also allow Octopath Traveller to contain a ninth personal journey — one of my own making.

How do you fill in the story blanks with this cast of characters? I’d love to hear in the comments, and totally won’t steal your ideas…