Octopath Traveler has been out for a little over three weeks now and reception has been pretty positive overall. An, understandably, common point of contention for Square Enix’s HD-2D adventure is a distinct lack of interaction between the eight protagonists. It’s an odd flaw in a game coming from a genre that is typically known for strong storytelling and dynamic synergy between characters.

It can be easy to zero in on this aspect and let it be a distraction that detracts from the game as a whole. Due to this, it may not be so obvious that another part of the JRPG formula is missing from Octopath Traveler’s package. Something that would otherwise be more apparent under normal circumstances and unlike the shortcoming of party member interactions, this exclusion works in the game’s favor. That is the absence of urgency.

Wars, prophecies, destinies, these are all common centerpieces among others for the JRPG genre. Events and plot devices such as these make the player feel like they are involved in something meaningful which in turn raises the story’s stakes and provides a singular goal to strive for. On the flipside, these grandiose plots can sometimes result in the player feeling a sort of shame for doing anything but progressing it. That’s not necessarily a bad thing in and of itself if the story is just that good, but this is where Octopath Traveler differs. 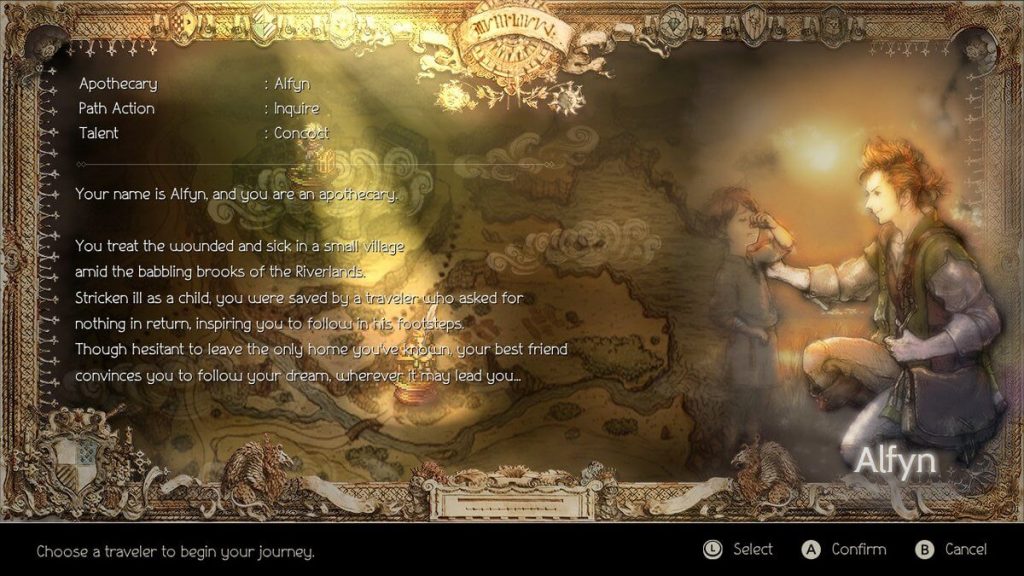 Octopath Traveler sidesteps this dilemma by doing away with these standard JRPG story conventions. There are no world-ending conspiracies to shut down, no warring countries that threaten the livelihoods of thousands, no crystals that need purifying, at least nothing of the sort that is readily apparent. Instead, we are presented with the deeply personal stories of eight completely unrelated denizens of Orsterra, the little people of this world. Each varies in tone, style, and content but none is given more importance than the others which is necessary for the episodic nature of the game.

This isn’t to say that these narratives aren’t to be taken seriously, though. Primrose’s sobering struggle through sexual abuse, human trafficking, and more is proof positive of that. However, these personal tales remain just that, personal, and hardly seem to have any bearing on the world save for the protagonists and those close to them. They maintain engaging motivations but without any sort of grand threat looming on the horizon the invisible force that pushes these stories along never becomes more than a gentle nudge, and that results in a mental release of sorts. It feels natural that a large amount of time would pass in between each character’s chapter and that gives the player a reason to take their time. 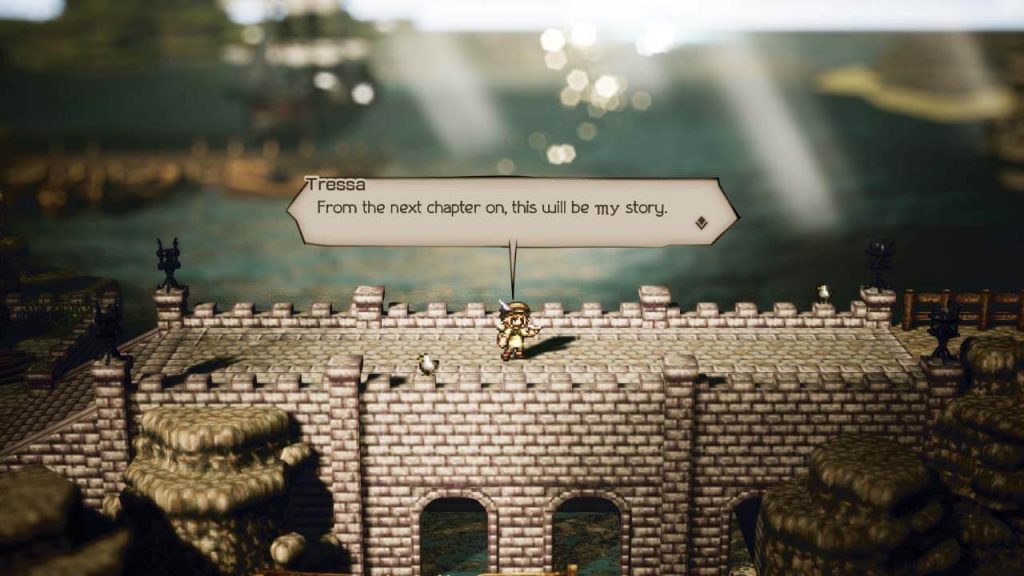 Chapters still need to be completed to finish the game but no matter what direction you go off in there will be multiple objectives in the vicinity of equal importance. This turns the decision of where you should go into where you feel like going. That is an important distinction to make, especially among traditional JRPG’s that have the tendency to funnel players towards a goal. When released of those obligations some of the focus is taken off the destination and placed on the journey instead, a shift that is all too appropriate given the title Octopath Traveler. It gives reason to sit back and enjoy the ride rather than feel pressured to drive the ride itself and that applies just as much to Octopath’s sidequests as it does its main quests.

Pit Stops Along the Journey

The general purpose of sidequests in RPG’s, and games in general, is to provide or expand upon some amount of world building and interaction that isn’t present in the main story. Using sidequests to serve this purpose is all well and good but they can ultimately feel out of place or insignificant in the greater scheme of things. Would our heroes really be going out of their way to help this random townsfolk when this imminent crisis threatens the peace of the world? Questions like these can nag away and potentially break immersion. In the worst case scenarios, sidequests can begin to feel like a checklist of tasks to complete before progressing with the main story, completely undermining any sort of world building value they are supposed to provide and instead becoming laborsome chores. 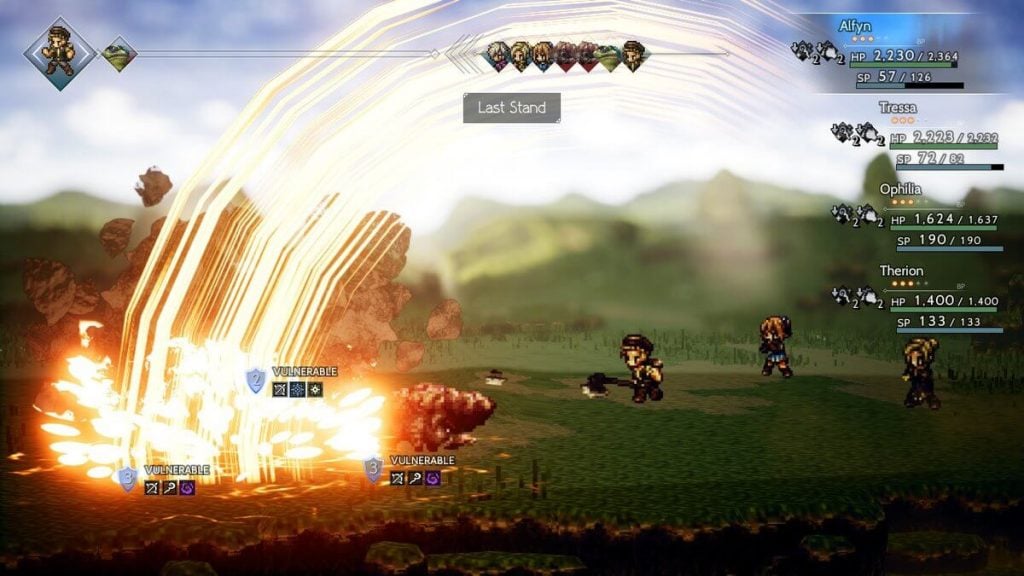 One way to circumvent this problem is to make sidequests as non-intrusive as possible. Octopath Traveler’s sidequests more or less tend to fall in one of two categories: quests with simple, straight-forward objectives that can be completed pretty much immediately and quests vaguer in their requirements where the path to completing them isn’t so clear. The former are simple enough to take care of and are sparse enough as to not interrupt a player’s routine for more than a few minutes.

The latter type, with their unclear goals, may seem like they would become time-consuming endeavors on paper but in practice, they are just the opposite. These quests give a few lines of dialogue to serve as a hint and that’s it; there’s no objective marker on the map pointing exactly where to go. They typically involve using a specific Path Action on someone, somewhere in the realm, and the continent of Orsterra is a big realm. 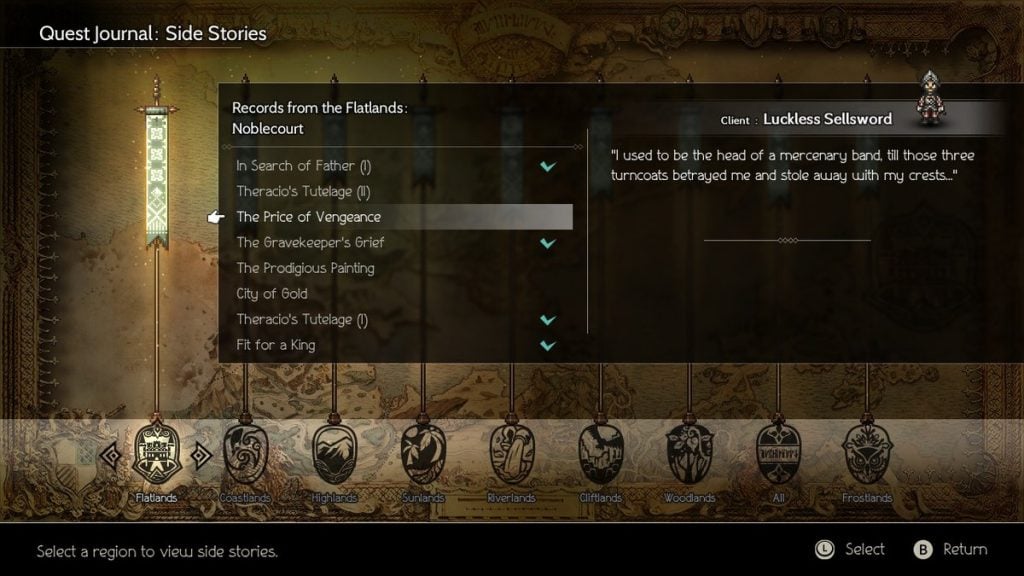 This ambiguity makes it abundantly clear that the game doesn’t actually expect the player to figure out exactly what needs to be done when receiving these quests. Doing so would be like finding a needle in the proverbial haystack. Instead, it asks for that little bit of info to be filed in the back of the mind for later.

Octopath Traveler’s main stories take the player to all manner of locations and interact with all manner of characters. It’s highly likely that one will organically come upon the character they’re looking for at some point during that journey. Mention of a knight who abandoned their duty recalls memories of another character looking for one such person, for example. It happens naturally without the player ever having to go out of the way from what they were already doing.

While this sort of hands-off approach to sidequests would undoubtedly be a completionist’s worst nightmare after finishing the main campaign and losing the primary reason to travel at all, it works splendidly while that reason is still there. It takes the player’s mind off of the checklist mentality and allows them to enjoy the world for what it is, rather than the numerical values it can provide.

The Octopath and Your Path

This all ties together in one word: relaxing. Series producer Masashi Takahashi said that he wanted to create a game that people could play before going to bed and he has certainly delivered on that desire. Due to the way its characters’ stories are progressed, the contents therein, and how sidequests are presented in a non-intrusive manner, Octopath Traveler is a rare instance of a JRPG that goes at the pace of its player.