Perhaps the most important aspect of Octopath Traveler is juggling eight characters into a team of four to pursue their stories and objectives. Finding balance within the team can be challenging, especially when one spot is dedicated to the originally chosen character and another for the purpose of the current quest. This leaves two places in the team to find balance. Traditionally, a mix of defense, offense, and stat-changing characters would strike a level of harmony that allowed for an increased flexibility towards an array of foes; Octopath Traveler has such a capricious variation of enemies that developing a balance can be a challenge.

While characters can take on a secondary job role which helps to alleviate some of the potential imbalance, this won’t be available until chapter 2. The level required to progress between chapters is quite the jump so grinding has become the norm to increase the levels of the eight characters. A constant need to rotate produces a constant need to grind, and as a result, a regular battle with an array of enemies. Fortunately, the battle style is incredibly enjoyable and doesn’t get tiresome. However, it can be tough, and much of this is down to the difficulty to find balance within the team due to the circumstances of the game. With each enemy having various weaknesses, selecting a team that can cover for each weakness is part of the strategy.

The complexity of each character means their open-world abilities don’t correlate with their battle style. For instance, Therion and Tressa can both acquire items from people in the open-world but are vastly different when battling. Therion and Primrose are more aligned when battling with both opting for a dagger as their weapon and some useful stat changing moves, but Primrose’s open-world ability allows her to persuade a person to follow her. This creates a fantastic breadth of individuality and plenty of potential strategies in battle, but with the unpredictability of enemies in battle, a difficulty to create a team that can react to every circumstance.

It’s not that side quests in Octopath Traveler are completely unrewarding, refreshing jam remains a delight every time

With so much time spent battling and rotating a team to level them up for the next chapter, the impact of the side quests are diminished.  Stories of the people you meet are very much the basis of Octopath Traveler, with the game consisting of various tales that build into one book. With an emphasis on the narrative, pursuing the tales of the people should be indulging and rewarding but there’s little incentive to complete their side quests. Battling is the only way to earn experience points to level up, which leaves the player in a constant need to grind to advance. If completing side quests earned experience points, there would be a higher incentive to complete them, as well as strengthen the concept of Octopath Traveler.

It’s not that side quests in Octopath Traveler are completely unrewarding, refreshing jam remains a delight every time, but their impact on the game is minimal at best. For all its faults, and there were many, Xenoblade Chronicles 2 does a better job of integrating side quests into the game. Completing a side quest in Xenoblade Chronicles 2 rewards the player with a certain amount of experience points for each character, with the amount dependent on the difficulty of the side quest. This means completing side quests has a positive effect on the main game, and as a result, freeing the player’s life from Rex and his bad voice acting sooner rather than later. 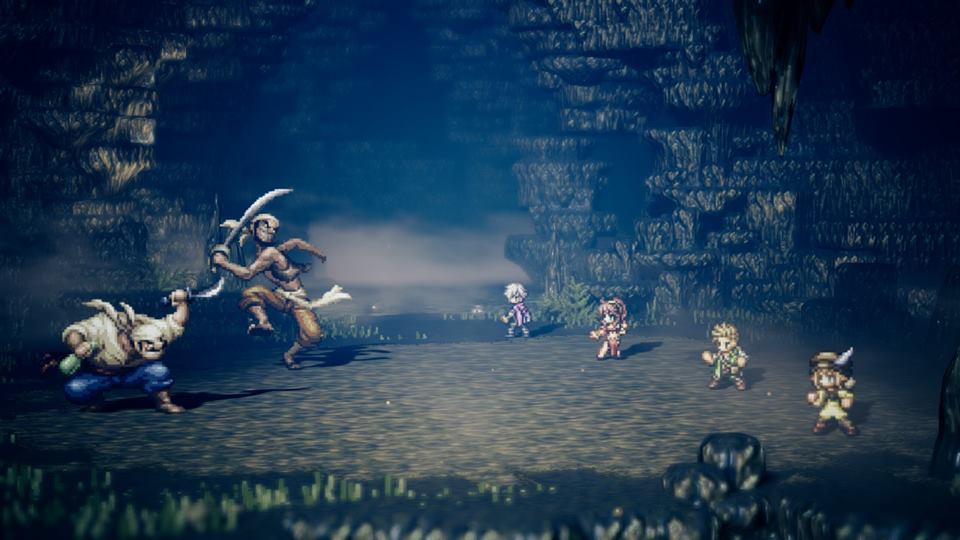 The characters in Octopath Traveler have so much depth to them when compared to those in Xenoblade Chronicles 2. There’s an element of darkness in their disposition, comfortably placing them in slightly murkier waters. Some of their stories can leave the player in some discomfort with its prevalence of some complex themes, with their development as characters the focus of the game. Xenoblade Chronicles 2 never really explores its characters without it becoming overly cheesy and bubbly, and while the voice acting in Octopath Traveler isn’t going to win any rewards, it isn’t Rex.

So with such a high emphasis on the eight stories, the expectation of meaningful side quests to thread the eight tales together isn’t too much of a stretch. One aspect where Octopath Traveler does succeed is the development of certain side quests that move NPCs around the map of Orsterra. The girl with the dragon egg comes to mind with its clever dialogue and how her story unfolds in the background of the eight main stories. It, however, remains relatively unrewarding. Finding her around Orsterra to continue her story is a beautiful indication that everyone in the world has their own tale to tell but there’s no understandable benefit for the player.

Earning experience points through side quests alongside battling would help the flow between chapters happen much more smoothly, allowing players to continue the story without the stop in between to level up. For everything that Octopath Traveler does right, and it succeeds in so many areas so wonderfully, this omission is perhaps the most glaring. It by no means diminishes Square Enix’s achievement, but it is an oversight that could have encouraged players to pursue the most important aspect of the game – the story.