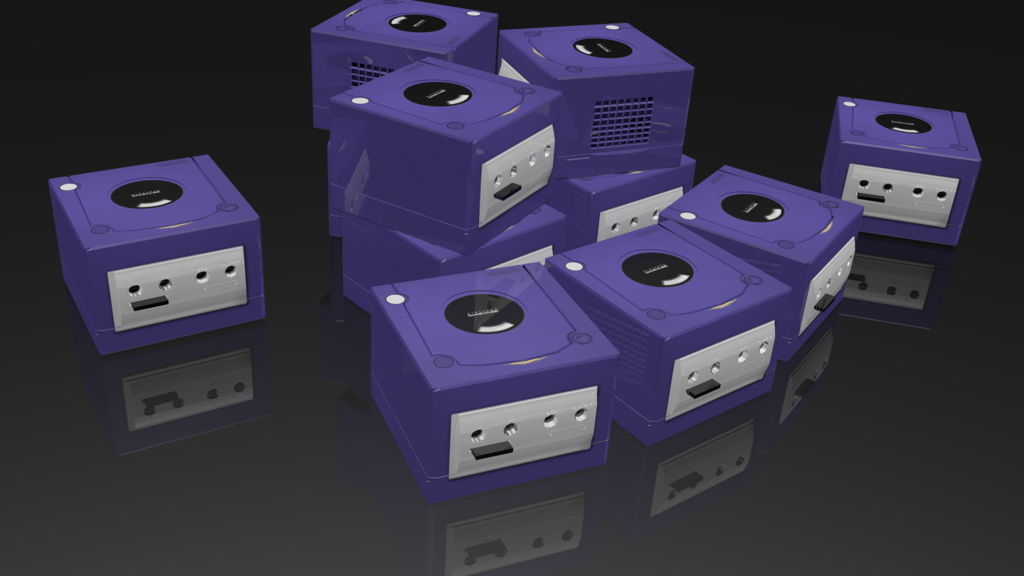 It comes as no surprise to know that the GameCube was considered a commercial flop. Released this day twenty years ago in Japan, the indigo-colored sixth-generation Nintendo console (formerly known as the Dolphin) was expected to become the champion of a three-way console war. When it launched, the Nintendo GameCube was one of the oddest looking video game consoles ever released. It was the first Nintendo home console to not launch with a traditional Mario game and it was the first Nintendo console to use optical discs as its primary storage medium. The console was praised for its controller, high-quality first-party games, and comparatively low price but was criticized for its exterior design and lack of features. Nintendo sold 21.74 million GameCube units worldwide during its lifetime (before it was discontinued in 2007) placing it just behind Microsoft’s 24 million Xboxes and well behind Sony’s impressive 154 million PlayStation 2 units sold. For many gamers, Nintendo’s Gamecube holds little-to-no value but for those loyal fans who stuck by Nintendo’s side in 2001, the little purple box will forever be fondly remembered as the system that dared to be different.

The reasons behind the low sales can likely be attributed to a number of factors. For starters, the GameCube was created to be a gaming console, and nothing more, whereas Sony and Microsoft promoted the PS2 and Xbox as a multimedia entertainment system. Another major factor in the GameCube’s lack of sales came from the arrival of online play, something dominated by Xbox while the GameCube initially lacked the capability to go online altogether. Nintendo showed little to no interest in the idea, and instead released modem and broadband adapters for the GameCube, which did little-to-nothing to draw gamers in. There were in fact, only four games with support for online play released for the GameCube; three of which were Phantasy Star titles and the fourth, Homeland, was never released stateside. And while Nintendo finally left cartridges behind, they made the fatal mistake of opting for a proprietary optical disc format smaller than DVDs. Although the Gamecube was more powerful than the PlayStation 2, released a year earlier, those tiny 8cm-wide discs designed to help prevent piracy, drop production costs and reduce loading times, were only able to hold around 1.4GB of data, while the Xbox and PlayStation 2 were able to utilize dual-layer DVD’s if required, with a storage capacity up to six times larger. This led to many multi-platform games either looking noticeably worse on GameCube or lacking a considerable amount of content. Not only was the system itself incapable of playing DVDs — a bonus feature that became the deciding factor for many when purchasing a PS2 — but the less than stellar performance led to many third-party exclusives jumping ship.

The Gamecube wasn’t perfect but it was far from a disaster.

Nintendo wasn’t able to brag about the GameCube being the most powerful system of the generation due to the Xbox’s presence but looking back, one has to think something went terribly wrong with the marketing. The GameCube retailed at $199 at launch and was later reduced in price to a remarkable $99 and yet, Nintendo couldn’t catch up with second-place Microsoft. Where Sony and Microsoft pushed for the idea of their consoles as living room staples, Nintendo simply had a whole different marketing strategy in mind. Nintendo began its marketing campaign with the catchphrase “The Nintendo Difference” at the E3 reveal. Later advertisements push the slogan “Born to Play”, and video game commercials featured a rotating cube animation that morphs into a GameCube logo and ends with a voice whispering, “GameCube”. The ad (seen below) is actually great but for the first time in the history of the company, the games just weren’t enough to get people to buy a bright purple hue piece of hardware featuring a carrying handle on the back, and a kid-friendly image. Lightweight and compact, this cube-shaped console, unfortunately, resembled a fancy lunchbox.

In an attempt to appeal to the PlayStation and Xbox crowds, Nintendo released two of Nintendo’s most unusual peripherals: the Gamecube/Game Boy Advance Link Cable and Game Boy Player. Both were meant to help connect Nintendo’s console and handheld systems and in a desperate attempt to reach an older audience, Nintendo established deals with companies like Maxim and Heineken to target 17-to-25-year-old males. According to this article featured on GameSpot, “Mercury’s promotional teams would show off products like the Game Boy Advance SP at porn industry parties and nightclubs. To fight the kiddy/toy image that GameCube was facing, Nintendo created promotional campaigns like Cube Clubs, Nintendo Fusion Tours, and Who Are You? campaign to bring public awareness of their products to older demographics.” Looking back it’s clear that the major problem was that the bulk of Nintendo’s audience had grown up and interested in something that felt more mature, and despite some genius marketing, Nintendo could never convince many fans that the Gamecube was worth the purchase.

Despite all the poor decisions made by Nintendo, as well as its reluctance to adapt to the evolving marketplace, Nintendo’s GameCube has been one of the most nostalgia-inducing consoles over the last decade. Though not particularly impressive by today’s standards, at the time the Gamecube was a leap forward from the flat, blocky visuals of the Nintendo 64, and was capable of pulling some extremely impressive graphics from its hardware. The fans who saw past Nintendo’s faults and made the purchase played through one of the best line-ups in gaming history. The legacy of top-tier, first-party titles featured several long-running Nintendo franchises and new IPs. Games like Pikmin, Animal Crossing, Mario Kart: Double Dash, The Legend of Zelda: The Wind Waker, Paper Mario: The Thousand-Year Door and Luigi’s Mansion are just a fraction of the system’s stellar library. Games like Super Smash Bros Melee ran at 60 frames per second and others like Metroid Prime reinvented a beloved franchise in the most unexpected ways. The 3rd party support was a huge bonus for the GameCube as well, and although the volume of 3rd party titles was tame when compared to Sony’s PlayStation 2 or Microsoft’s Xbox. Nintendo had learned from previous mistakes and sought to rejuvenate their relationship with developers. Capcom famously promised five exclusive games for the GameCube: Killer7, Dead Phoenix, P.N.03, Viewtiful Joe and Resident Evil 4 (although Dead Phoenix was cancelled). Meanwhile, Silicon Knights were responsible for the fan-favorite Eternal Darkness,  LucasArts delivered Star Wars Rogue Squadron II: Rogue Leader and Sega gave us Super Monkey Ball.

Many doubted the little box and its unique controller but all of the titles mentioned above, plus several other notables, form a legacy of quality well worth the asking price of $99. Much like all of Nintendo’s consoles, the Gamecube delivered quality over quantity. It features, in my opinion, the best controller Nintendo has ever produced, and hours upon hours of non-stop entertainment. The Gamecube wasn’t perfect but it was far from a disaster. In fact, the Gamecube, despite the number of sales is still a success. Due to its compact, lightweight design, Nintendo could undercut its competitors in terms of price. Unlike Sony and Microsoft, Nintendo actually made money on each console. In the end, Nintendo settled into third place in the competitive console war, but regardless of the sales, twenty years later, it holds a special place in my heart.