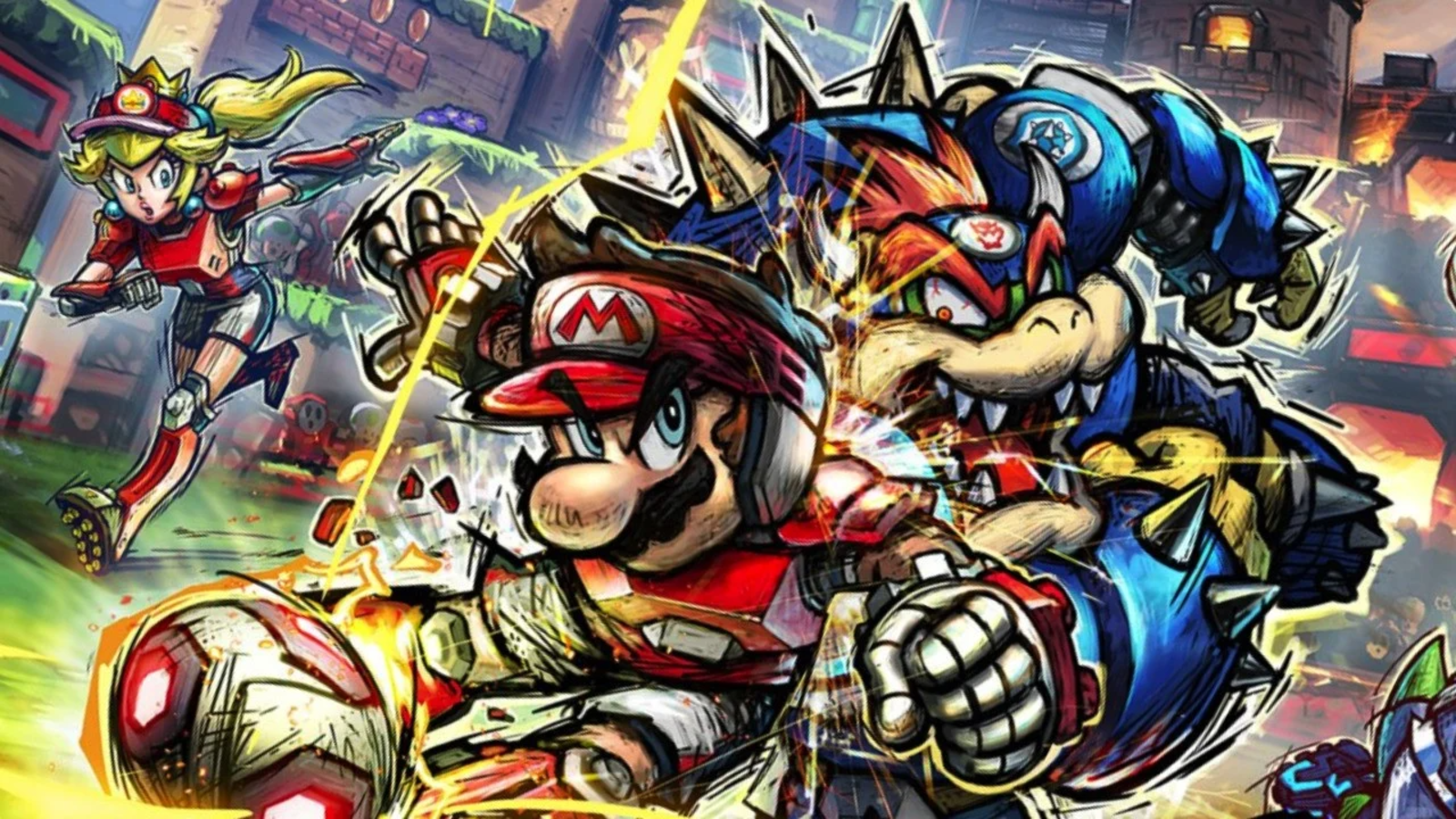 15 years since Mario and friends last participated in their over-the-top ‘Strikers’ soccer game, the gang is finally back together on the field for another dirty and intense kickoff. Beyond a welcoming layer of stylish first impressions, saying Mario Strikers: Battle League is hitting perfect shots on its goal would be far from the truth. Developer Next Level Games is able to outmatch most sports titles on Nintendo Switch, but that is only because of Battle League’s deep gameplay mechanics and stunning visuals. Battle League is a ridiculously fun entry in the Mario Strikers series that is also plagued by an overwhelming lack of content and competitive options.

Despite all of its incredible highs, a lingering question will sit with audiences every time they exit the field and watch from the sidelines: how long will Mario’s latest game of Strikers actually last? Like its cast of soft icons turned competitive fighters, Nintendo will have to play rough if they want to achieve a victory with Battle League. The Nintendo Switch iteration of Mario Strikers is yet another promising return to one of the plumber’s extracurricular activities, yet it continues the same trend of being an entry that banks on its future. It is literally stuck in an overtime period that will either end in victory or a devastating loss.

No Shots Wasted… At Least On The Field

Mario Strikers: Battle League is the Mushroom Kingdom’s third iteration of its competitive soccer series–or football, depending on the reader’s region. Exactly like its predecessors, Super Mario Strikers and Mario Strikers Charged, the new Nintendo Switch entry revolves around standard five-a-side soccer matches that heavily lean in on the comic aggression players would expect to find in a competitive Mario title.

Unlike the previous GameCube and Wii games, Battle League has shifted its focus to an expected modern approach of consolidated player customization and online play. The game offers a cohesive tutorial, a shallow single-player, highly entertaining multiplayer, and a decently structured online. Its biggest problem stems from a lack of content and variety as each mode is practically the same.

From its opening cutscene, Mario Strikers: Battle League wants to make one thing clear to players: it is out to be stylish and competitive. In terms of mechanics, Battle League is without a doubt the most complex Mario sports title on Nintendo Switch. This is certainly not a pick-up-and-play party game that any casual player can immediately gravitate towards. Mario Strikers: Battle League asks players for their patience and wants them to master the Mushroom Kingdom’s in-game universe soccer sport. The game wants players to utilize tackling, punching, rogue banana peels, throwing bob-ombs, and all of its other comical aspects that make this version of soccer a battleground.

Mechanically, Battle League is the best of both worlds. It takes the defining aspects of its predecessor entries and blends them together for an optimal control experience while also doing something new. Thankfully, the incredibly addicting and immersive gameplay foundation Next Level Games created all those years ago is all held intact here and has not aged a day. Mario Strikers: Battle League still plays and controls as slick and tightly as its predecessors. Once again players will find themselves locked in a competitive mindset as they kick, tackle, evade, pass, throw items, and perform finishing moves called Hyper Strikes. Outside of a lack of button-mapping, the controls and core gameplay mechanics of the Strikers series have been greatly fine-tuned to better match a modern experience.

Additionally, a smaller roster (also a major setback, but we’ll get back to that later) has allowed Next Level Games to focus on the series’ first-ever team customization system. With the addition of a reasonable currency and unlockable character gear, Mario Strikers: Battle League has opened a floodgate to player choice and strategy that the sports franchise has never had. Depending on how players structure their teams, Battle League can leave them with an experience legitimately reflective of its actual sport. Players can choose how they want to strategize against other players and approach dealing with their own teammates using custom pre-sets. Rubbing off on the same dirt as its core gameplay, the entire system feels meticulous and catered to an audience willing to get their hands filthy to achieve the best outcome.

Where Battle League shines most outside of core gameplay and its new ideas is in the glorious presentation. All the Mario Strikers games have been stylized and are packed with charisma. Battle League is absolutely no exception as it mixes together modern Mario and recognizable aspects from its previous gritty atmospheres. The result is without a doubt the most visually animated game Nintendo’s cast has been in. As if the work Next Level Games put into Luigi’s Mansion 3 was not impressive enough, Mario Strikers: Battle League blows away expectations with spectacular animations that are never afraid to bath in the personalities of Nintendo’s beloved characters. There are no pre-renders here. Every animation and move has been fully created in-engine by Next Level Games.

The one major problem with the gameplay mechanics and presentation is that the game can admittedly get confusing when looking at the field. This mostly has to do with the roster size, but there are others aspects to also blame. The limited number of playable characters inevitably leaves players in a situation where there will be several doubles on the field if they are not carefully choosing teams when in local play. With the focus of online play, this problem has of course become a larger issue.

In the old Mario Strikers games, even when there was not an online focus, opponents would always be able to create visually distinct matches due to there being a single team captain and sidekicks. Characters vastly stood out from the way the fields looked, but that also had to do with how the older games were stylized with a favorable approach to being gritty and dark in a goofy manner. Battle League does slightly sacrifice visual distinction in favor of franchise consistency by going all-in on a lush palette akin to the other Mario sports titles, but the player’s occasional loss of eye contact can also come from the amount of action and movement going on. Once again, the game is beyond gorgeous and has some of the Mario franchise’s best visuals to date but there is no denying how colors and action can begin to blend together.

Mario Strikers: Battle League needs some gameplay accessibility options that give players color-coded team outlines, or perhaps an increase in icon and indicator sizes. For such a beautiful-looking game, what Nintendo lacks most in their latest title is options–and ultimately that is what brings down Battle League. This was a game in dire need of more characters, modes, and customizable options at its launch. Its initial release has placed Nintendo in a rough position that may even kill its latest Mario sports title in a matter of weeks.

Like the other Mario sports games on Nintendo Switch, content is where Battle League can suffer most. Compared to the other two entries in the series, the many problems attached to the Switch iteration of Mario Strikers can feel like a slap in the face to its legacy. For sports games that offered such a rich amount of content, Battle League is surprisingly and unsurprisingly the polar opposite. The latest game in the series only has ten characters, a small handful of field aesthetics, and one dedicated type of soccer mode that is used across all local and online play. Players are not given much to tinker with when it comes to customizing matches or escaping the standardized gameplay formula.

Mario Strikers: Battle League feels crucially limiting at launch. Even if Next Level Games is adamant about creating a local and online-focused game, Battle League desperately needs more content to spruce up its offerings on both the single-player and multiplayer fronts. The game lacks a true campaign as players can only enter a few designated battle cup matches–which are just local play matches with CPUs. Even with Nintendo’s promise of online seasonal tournaments, every game mode available online is essentially the standard match type limited to four human players–half the count of local matches.

Once again, it should be reiterated that the main mode is not poorly designed or unenjoyable. It just does not offer any variety of options as it lacks customizable elements or the special events prior games had. There is quite literally nothing else players can do in the game outside of the five-a-side matches with computer players, friends, and randoms online. At this point though, Nintendo Switch players should know what they are getting into if they have played or heard anything about Mario’s other recent sports outings.

Nintendo has already announced that Mario Strikers: Battle League will be receiving free post-launch content, but the game’s impact and public presence will ultimately determine if it has a longer life span than Mario Tennis Aces or will succumb to the short fate Mario Golf: Super Rush faced. Readers should be aware that the initial support for this game could unfairly make or break its future more so than the other aforementioned Mario sports game–and with a lack of local-play content, it is easy to assume that the game will see a rapid decline in player activity soon.

Unlike Tennis Aces and Super Rush, Battle League is very much a game that is throwing down all of its coins on online play as it is the majority of the game’s content. For those who do not have a local multiplayer scene to look forwards to, Battle League may very much become a dead match in the future only populated by computer players. Previous Mario Strikers games had plenty of wacky modes and gameplay scenarios to keep players engaged long after they completed the campaign. Battle League still needs those additions to keep players occupied and surprised.

From the moment audiences heard that Next Level Games would be returning to the Mario Strikers series, there was no doubt that Battle League would be a hit–at least in its presentation and mechanics. The latest entry in the Mario Strikers series is one of the most entertaining sports games on the Nintendo Switch users can purchase, but it is far from being the perfect Mario sports experience that fans have yearned for since the Wii days. While this may be a hard debate whether it is worth picking up now or down the line, there is no denying that Mario Strikers: Battle League is glowing with potential–it is only a matter of if Nintendo is secretly planning a full-on offensive strategy behind the scenes.

Hopefully, and in a short time from now, Mario Strikers: Battle League will stay on strong standings with a cult following charging behind it. In its current state though, Next Level Games has a long way to go before they can hold their intense and entertaining establishment with high regard. Battle League is a fun experience and a blast with friends, but a game desperately in need of more.