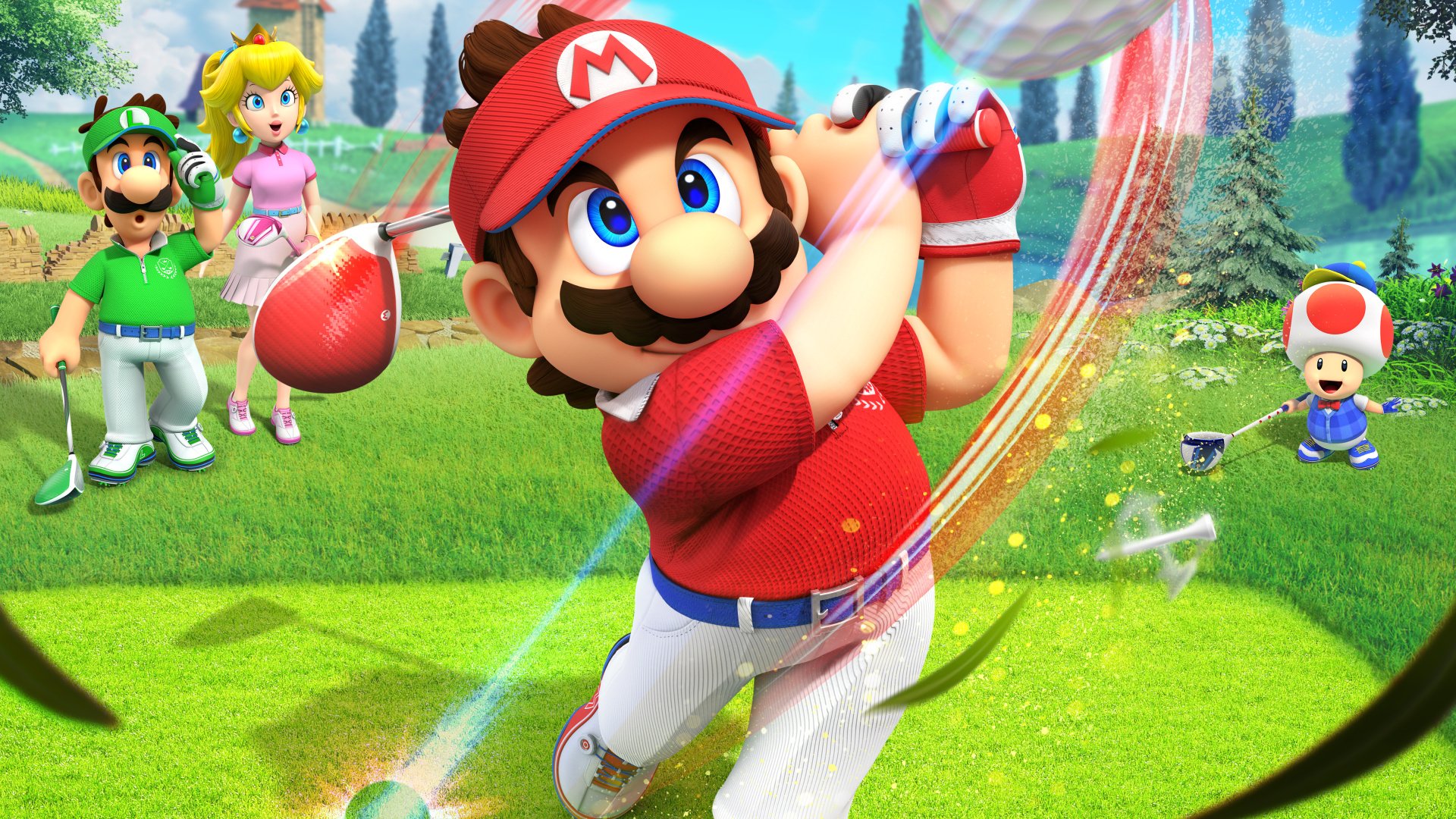 After over seven years off the course, Mario and his friends are back with clubs in hands as they step foot fresh of a tennis court and into a shiny albeit lackluster putting green. Mario Golf: Super Rush is yet again another entry in the Mario Golf series that comes in swinging with entertainment; however, it inevitably manages to be one of the weakest of its sport as it inches close to rolling into a sand bunker. In comparison to the creativity of past handheld and console entries, Super Rush falls short of delivering a golf experience that immersively culminates both the club-and-ball sport with the ever so growing world of the Mushroom Kingdom. The result is a game that feels less fitting of its brand yet still worthy of the name as it flaunts and partially lacks the quality that Mario Golf has always held high.

Like the other entries in the series, Mario Golf: Super Rush still holds the same core gameplay that has persisted and been carefully refined since the mascot’s launch into the sport with 1987’s NES Open Tournament Golf. Heavily reliant on a power gauge, Super Rush still sticks to the familiar Mario Golf gameplay formula that has players picking clubs, carefully lining up shots, and firing away with the occasional curves, topspins, and backspin in mind. If you have played any of the Mario Golf games since the Nintendo GameCube’s Toadstool Tour, you have already experienced what the core gameplay of the latest title has to offer– and that’s for the better as Mario Golf already has a magnificent foundation. The only change made to the gameplay this time around aside from the newly added special shots that first appeared in Mario Tennis Aces is the new risk of going for maximized powered shots.

On the topic of the special shots, these super moves that are unique to each character are used based on a performance meter. The flashy performances that each present different outcomes and abilities are completely optional for every game mode and can be toggled in the settings before a match begins. Unlike special shots, the new standard feature for maximized powered shots may cause controversy among veteran fans. At the tippy-top of the power gauge in Super Rush is a new rhombus-like shape. When firing a ball at above 95% power or so, there is a randomized chance that the player’s shot can curve left or right. While this new method of firing away at golf balls does take away complete precision, it does smartly add a unique sense of risk to playing with maximum potential.

While the latest gameplay additions are indeed substantial, the real highlight inclusion of Mario Golf: Super Rush comes in the form of its two new game modes: Speed Golf and Battle Golf. These similar free-for-all modes embrace thinking in open and closed spaces retrospectively at a careful yet steadfast rate. Super Rush provides multiple ways to play Speed Golf and Battle Golf; however, both are heavily reliant on the idea of outpacing opponents in meticulous ways. Improvising a practical course of action to victory and enacting it perfectly is important in the game modes. Both are a race to the finish that each provides unique ways of playing golf as they smartly manipulate the game’s main mechanics by adding an on-foot scenario to the mix. For the first time in the Mario Golf series, Mario and the cast are controllable from a third-person perspective as the player has to run around individual holes in Speed Golf and the closed tournament location of Battle Golf.

Speed Golf pits players against one another on individual courses, while Battle Golf provides one massive stadium with nine holes to capture. While rushing to the end is certainly the objective, taking your time and hitting the correct shots to minimize your workload is equally important in both game modes. They may seem almost mechanically identical in terms of the overall idea on the surface, but rest assured, the two are vastly different as the player begins to learn how to conquer their locations. Bringing your character from point A to B is always challenging as the player has to watch their stamina and keep their par score in mind. Going for the fastest route to a hole is not always the answer, as the player has to think about how they will get back to their ball the quickest. Between keeping below par and calculating the fastest route, Speed Golf and Battle Golf constantly challenge players to really outthink their opponents.

Outside of the three different multiplayer modes that will undoubtedly consume the majority of Super Rush’s player base, what adopters are left with to dive independently into is a rather clunky single-player adventure. Not even speaking compared to its predecessors or the other Mario sports titles, the Golf Adventure mode is barely sub-par at best in its middle and closing hours as it fails to really bring an enjoyable experience to the field. It truly is the most disappointing aspect of the game. The player starts in the Bonny Green Golf Village and eventually makes their way across the game’s six unique courses as they upgrade their Mii character through experience points and buying new gear. While the idea sounds promising, the result is insufficient. Outside of unlocking the multiplayer courses, which can simply be accomplished by also playing 18 hole matches on the prior stage once, there is no point to the single-player campaign.

Where the single-player thrives most is in delivering a perfect introduction for newcomers to the Mario Golf games. Depending on your pacing, the first hour or two of Golf Adventure will teach players everything they need to know about playing Super Rush. It perfectly manages to explain every aspect of its gameplay. There really is no reason to play the single-player’s opening hours outside of further understanding the game’s mechanics. Its three boss battles are absolutely unnotable, and having to jump between different forms of Golf can lead to moments of slight brilliance avalanched by frustration — for example, forcing players to master elevation in the second world is important but laughably redundant as it is a skill that is hard to pick up. None of the progress made in Golf Adventure matters towards any of the game’s other aspects. Playing through Golf Adventure will only make you wish for more genuine solo content that could allow you to test your skills.

The most disappointing aspect of Mario Golf: Super Rush is its lack of modes and features present in previous entries — at least from a single-player and local couch coop perspective. While the game’s lack of unlockables outside of the main courses is fine, the presence of no side modes to test the player’s skill is rather disappointing. Super Rush is already sitting at only six courses — four less than its previous entry World Tour — so the frustration early adopters would have with the game’s lack of content is rather understandable. Not having a playground to practice or learn unique tricks will only leave players begging for tips, guides, and videos from the experts. There is nowhere for even the best of the best to test themselves, as fighting other human players again online is the only alternative. Looking back on what the previous entries provided, Super Rush is in dire need of extra content. Seriously, how is there no local or even online tournament mode in the game?

It has already been announced that Mario Golf: Super Rush will be receiving future content updates that will add more to the base game for free. This promise that Nintendo will undoubtedly deliver on is hopeful for the title’s future. Still, fans will have to wait and see whether those updates come out fast or make the game worth only cracking open in a couple of months once it is blooming with things to do. Nonetheless, in the same vein as Mario Tennis Aces, developer Camelot will possibly be playing a lot of catch-up in terms of adding old content back in as they continue to pursue new ideas for their latest title — which is a shame because many of their new ideas are ultimately the game’s hole-in-ones.

Mario Golf: Super Rush is no hole-in-one, but it is certainly on par with its predecessors in several regards. The standard golf mode is still as entertaining as ever, and while perhaps the new single-player adventure can be clunky at times, Speed Golf and Battle Golf might as well be called a staple for the series already. With the promise of future free content updates, there is no doubt the game will keep fans with their clubs in hand for a long time as it adds more new maps, modes, and characters to its playoffs in the future. As it stands on its current course, Mario Golf: Super Rush is a solid sport that will likely leave audiences with a strong desire for more. Perhaps it is not as exotic as both Toadstool Tour and World Tour or arguably its N64 counterpart for that matter, but it is a shining double bogey with a lot of recovery room left in its run before it can round out a complete score.