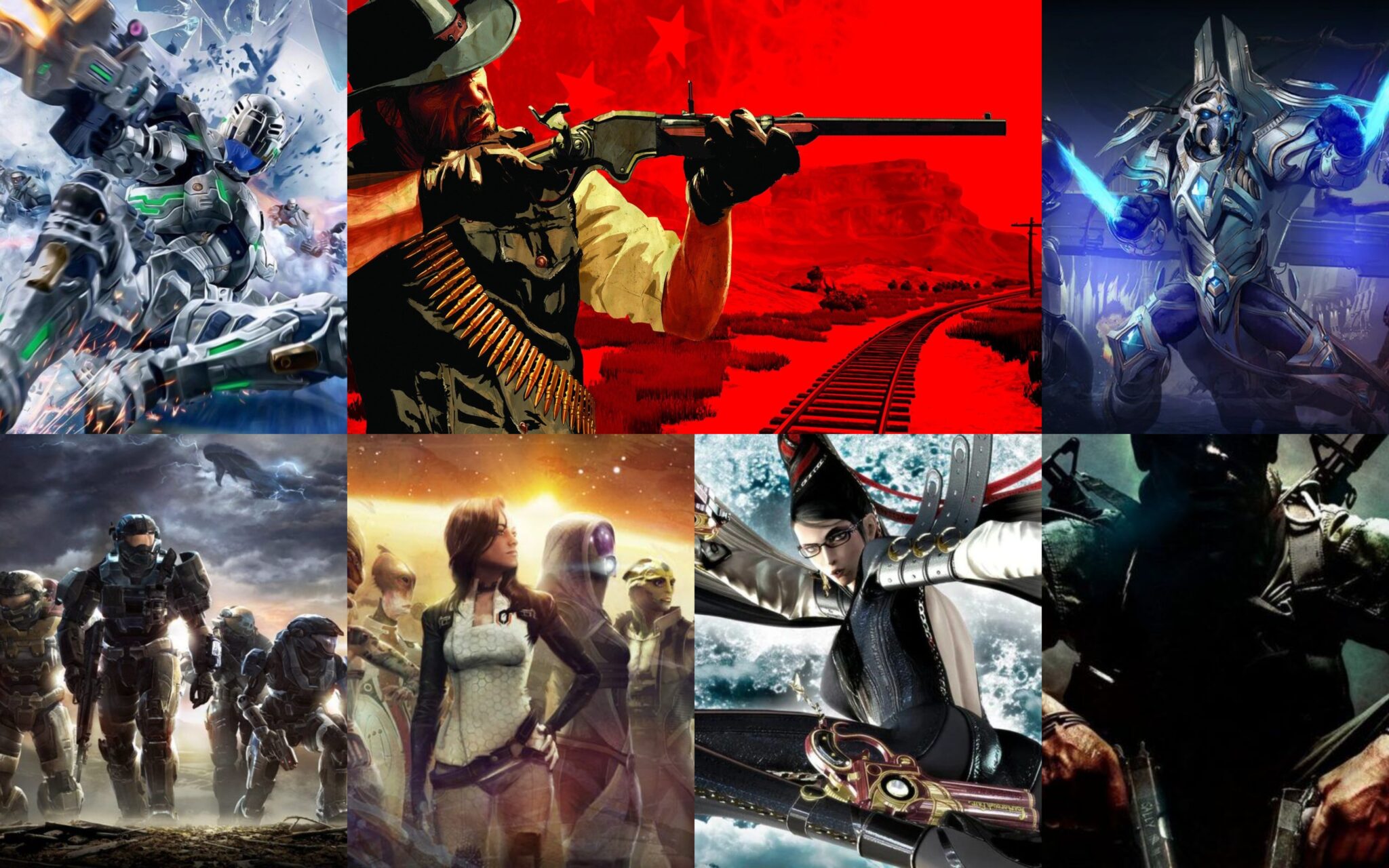 While the well-documented chaos of 2020 has also reverberated into the gaming landscape, making this year in video games a memorable one, to say the least, the start to the previous decade had it beat by its sheer quantity of exemplary game releases. So why not take a peek back to the ten best games that 2010 had to offer? For the sake of clarity, this list will be counting games based on their Western release dates.

Even in 2010, third-person cover shooters were starting to feel a bit old hat, but Vanquish was able to prove that even the most hackneyed concepts can feel invigorating in the hands of the right creator. Shinji Mikami (Resident Evil, God Hand) was able to buck the trend of the defensive cover-based gameplay by strapping rocket skates to the protagonist’s knees, and allowing him to skirt around the battlefields at a breakneck pace, before effortlessly flipping over a piece of cover in slow motion to rain bullets down on the opposition. Few shooters either before or since have managed to have the same degree of sleek smoothness in their controls as Vanquish.

When Call of Duty fires on all cylinders it earns its status as one of the highest-selling in the industry, and Treyarch’s Black Ops might have been the last entry to advocate that notion. By delivering a campaign with an admirably surprising – if slightly uninspired – twist, a significantly less disordered multiplayer component than its predecessor, and a Zombies mode that expanded upon the previous iteration without diluting the appealing simplicity, Black Ops was able to hit a row of bullseyes with a shooter package filled to the brim with engaging content.

Rewinding back further than any Halo game had previously been, Bungie decided to cap-off its tenure with the franchise by focusing on the tragic downfall of the planet Reach. The ten-mission campaign follows Noble Team as they fruitlessly try to delay the oncoming Covenant invasion, filling in some blanks in the backstory for lore buffs while treating more casual fans to a variety of never-before-seen scenarios, with the game even dipping its toes into some outer space dogfighting for one section. Further experimentation was seen within the multiplayer thanks to the inclusion of Armor Abilities, and the genius credits system allowed players to customize their Spartan’s appearance with a dizzying array of cosmetic options. Custom Games also saw its return with its most expansive incarnation yet, thanks to the brilliant Forge World – a gargantuan map dedicated to the sole purpose of player-created game types and maps. Regardless of whether or not Reach was the pinnacle of the series, Bungie certainly left on a high note.

It would be hard to find a more influential horror game from the past ten years than Amnesia: The Dark Descent. Its first-person camera perspective acted as an obvious point of inspiration for the likes of Outlast, Alien: Isolation, and Resident Evil VII: Biohazard, and it also helped usher in a new age of Youtube content creators, with big-name influencers such as PewDiePie and Markiplier getting their start through their Amnesia playthroughs. It was a watershed release for the horror genre, but even removed from that context it stands on its own two feet as an admirable horror outing. Through its blend of old-school adventure game design and overbearing suspense, Amnesia strikes a remarkable balance between unforgettable scares and engaging exploration.

1998’s StarCraft managed to cement itself as one the seminal real-time strategy games, so naturally, trying to create a sequel that would usurp its already massively popular predecessor that was still being played was an incredibly risky endeavour. But Blizzard used a 12-year time gap in releases wisely, very carefully deliberating between what could be improved and what should be left alone. This resulted in is a sequel that feels comfortably familiar, not looking to mess with the formula too much, but instead iterating where applicable. After receiving unanimous praise from critics, and retaining a core player base that’s still active, it seems fair to say that Blizzard took the correct approach with the sequel.

Playdead’s debut release happened to be a spectacular one, with gothic puzzle-platformer LIMBO helping to contribute to the indie boom that was seen in the late 2000s and early 2010s. With a monochrome art style portraying a morbid world, Limbo never pulls any punches, and it certainly isn’t one for the faint of heart. For those who can stomach graphic depictions of violence and an oppressive atmosphere that never lets up throughout the four-hour run time, Limbo ends up being a decidedly haunting delve into the dark imaginations of the team at Playdead.

Stepping away from the satirical nature of Grand Theft Auto, Rockstar Games brought its open-world expertise to the dying days of the Wild West with its most sincere story to date. Controlling John Marston, players are tasked with rounding up the remaining members of his old outlaw gang, as John is forced to face the demons of his past. The more meditative nature of Red Dead Redemption showed the world a softer side of the rebellious Rockstar, a side that was willing to cast away its snarky persona in order to deliver one of the seventh console generations’ most touching stories, and one of gaming’s most beloved protagonists.

What initially started as an expanded re-release for the original Super Mario Galaxy ended up blossoming into Mario’s second full-fledged adventure in space. While Galaxy 2 forgoes some of the atmosphere and mood of its predecessor, it more than makes up for those omissions with its bevy of new ideas, including several new power-ups and the welcome return of Yoshi. With all of the new content and levels that burst with the same amount of creativity as its predecessor, Super Mario Galaxy 2 is just as much of an essential title in Mario’s gameography as any of his other strongest outings.

While PlatinumGames had earned some previous acclaim with the release of MadWorld and Infinite Space, it was Hideki Kamiya’s (Viewtiful Joe, Okami) Bayonetta that made Platinum one of the most respected developers in modern gaming. Acting as somewhat of a spiritual successor to Kamiya’s own genre-defining Devil May Cry, Bayonetta features the titular provocative and promiscuous witch as she styles on the forces of Paradiso (Bayonetta’s analog to heaven) in one of the finest action games to date. With a hugely flexible combat system that takes numerous playthroughs to come close to mastering and a constant barrage of flashy spectacle, Bayonetta rightfully earns its place amongst its genres pantheon of greatness.

By cutting down on the fluff, tightening up the combat mechanics, and doubling down on the strong character interactions, Bioware made its sequel to the 2007 franchise debut a space epic for the ages. Having a tight 25-hour run-time, Mass Effect 2 packs each mission with story developments and character growth, culminating in one of the medium’s strongest closing acts. The crew that Commander Shephard amasses throughout the duration of the game is an eclectic cast of loveable weirdos, each with their own motivations and expertise, and by the end of the journey, they feel like an intergalactic family that the player grows to cherish. Even though the franchise would later be dragged through the mud with a couple of disappointing follow-ups, Mass Effect 2 is still one well worth experiencing and remembering.