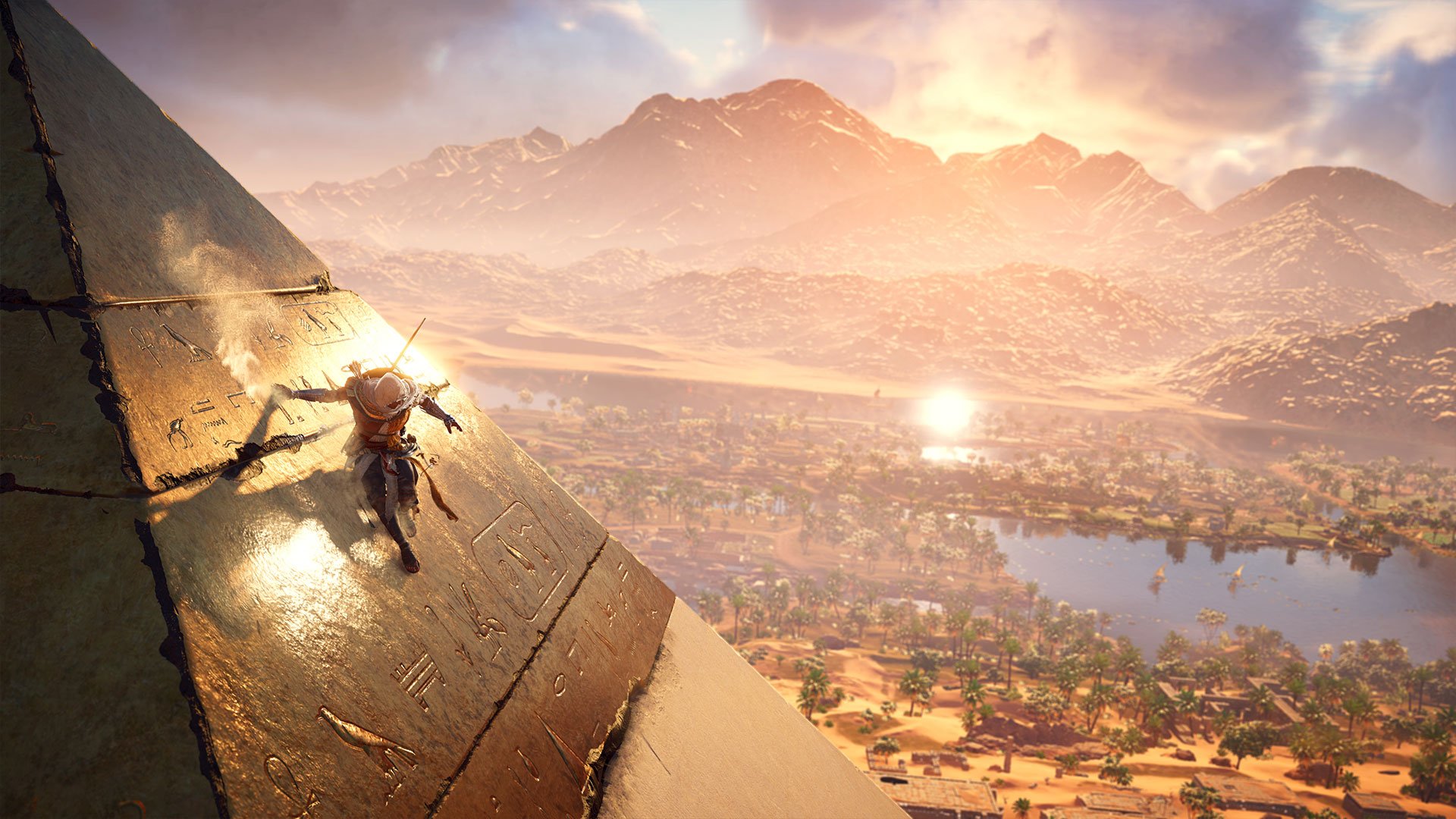 Ubisoft’s announcement that Assassin’s Creed: Origins will contain an educational Discovery Tour mode has sparked a lot of controversy in recent weeks, but players seem to broadly agree on one point: that games are uniquely suited to bring such worlds to life, and the effort that goes into their detail is worth appreciation. Whether non-combat modes threaten the status of game difficulty or not, it has been uplifting to see players welcome a bid for historical accuracy and authenticity in the games we play. The Assassin’s Creed series has always had a special relationship with the annals of history, blurring the lines between real historical figures, geographic locations, and famous events, with conspiracy theory plots, secret organizations, and even the interference of the gods in our daily lives.

Yet armed with the Animus and its Database of real historic information Assassin’s Creed has long highlighted how games are uniquely suited to allow players the visceral experience of stepping back in time and exploring a new world. Origins seeks to take the next step forward, with a Discovery Tour mode populating the world with ‘dozens of interactive tours curated by historians and Egyptologists’, players will have access to a wealth of sourced information ranging from lessons in mummification to the life of Cleopatra. It’s a bold move to add educational non-gameplay elements to such a popular triple-A franchise, and the game’s creative director, Jean Guesdon, admits that they ‘hope that teachers will seize this opportunity’, and that ‘many more people than just players can benefit’ from the new mode.

But why would a studio choose to accept such heavy responsibilities for a move that has nothing to do with gameplay, or even necessarily story? I believe the answer lies in an acknowledgment of the reality of players’ relationships to the games they play.

Games, educational or not, have always been a source for learning and inspiration for the generations of children (and adults) that play them. Looking back at the games I played growing up it’s not hard to see that I was unwittingly learning about history, geography, religion, or even economics, and the more I rediscover how games have shaped my interests today the more I agree that games like Assassin’s Creed: Origins have a debt of authenticity towards the worlds they depict, and the players they inspire.

I first noticed how games had set me up with a knowledge of odd miscellanea during secondary school, in a class where the topic of runes somehow came up, and it came out that I was the only one in the room who had heard of them before. Strange as it seemed then, it made me suddenly aware of the fact that while I been playing Runescape and being at home in worlds inspired by Norse mythology the rest of my class had had very little reason to ever come across the subject. Of course, I didn’t have a comprehensive knowledge of runic lore, and my classmates would undoubtedly come across the topic sooner or later, but it was the first in a long list of areas gaming had tutored me in without my ever being the wiser. From battle tactics to fantasy lore, gaming has long proven itself an unlikely gateway to information about ancient cultures and rare arcana.

The more I consider how many concepts games introduced me to, the more I realize that my formal education was wholly lacking in some areas. Taking ancient Egypt as an example: a subject we never even brushed on in my history classes, my understanding of the topic could so easily have been nothing more than a vague amalgamation of biblical stories and Disney channel representations. Lucky for me, I had a copy of Pharaoh, a strategy game published by Sierra in 1999, where players delve into the world of ancient Egypt to build thriving cities on the banks of the river Nile.

With the same lofty aspirations as Assassin’s Creed: Origins, Pharaoh spans nearly twenty centuries of Egyptian history, from the pre-dynastic period to the new kingdom, as the building of pyramids gives way to the wars with the Roman Octavian. Pharaoh taught me about irrigation and the vital importance of the Nile to early Egyptian settlements, about ancient gods and ritual rites of death, and about a tireless civilization that wrought sphinxes into being and birthed the Library of Alexandria. Toiling in the sands of Egypt lit a fire in my mind that led me to devour documentaries and books on the Egyptians, despite my lacking formal education. Yet I am sure I was not alone in being inspired by Pharaoh, and it certainly wasn’t the only game that pushed me towards an interest in ancient history.

From the Annals of History to an Age of Mythology

The massively popular real-time strategy game Age of Empires is fondly remembered for a campaign mode that jumped through fascinating revolutions of history, but I was an even bigger fan of its spin-off series Age of Mythology. Though the campaigns hero, Arkantos, hero of Atlantis, was entirely fictional, his exploits across Greek, Norse, and Egyptian myths enveloped me in a world of legends, all of which were new and exciting. Arkantos sieges Troy, rescues Odysseus from the enchantress Circe, resurrects Egyptian gods, reforges Mjolnir, and rises back from more than one underworld. Frankly, it’s a wonder the Templars aren’t involved. Age of Mythology may have been completely departed from reality, but it sparked my imagination and began to familiarize me with a whole host of beliefs and cultures that I’d never encountered before.

In school, meanwhile, my education in mythology was completed within a single hour-long religion lesson that consisted of an A4 sheet of paper explaining everything I needed to know about Greek, Norse, and Egyptian mythology. I should be thankful that we even looked at religions outside of Christianity in that subject, but even as a child, and largely thanks to the games I’d played, I was incredibly sad that we didn’t spend more time with the likes of Odysseus and Ajax.

From this Early Cradle of Civilization on Towards the Stars

Bitter as I may be, the story of my lackluster education in history is ultimately a happy one, because it didn’t end with secondary school and it likely never will. As time has gone by, the seeds planted by these early games have led me to books, lectures, and museums that have only continued to feed a passion for history. Most recently I attended an exhibit at The British Museum in London about the history of the Scythians: a nomadic people whose tribes ruled the Siberian steppes with fearsome armies of mounted archers. Why did I decide to go? I hadn’t heard of the Scythians until the rather more recent release of Civilization VI. Yet Firaxis’ depiction of the fearless Scythian Queen Tomyris, coupled with her AI’s notably aggressive early-game tactics, introduced me once again, this time as an adult, to a chapter of history that was new, captivating, and worth exploring.

Seeing the Scythians marked in stone and gold made me realize how much influence games can have over our interests and education outside the world of pixels and high-scores, and if I can take so much inspiration from early games about history and mythology I can only imagine what new generations are finding in the murky streets of Assassin’s Creed: Syndicate or the Roman temples of Brotherhood.

What’s Past is Prologue

I’ve talked a lot about games inspired by ancient history and mythology, but there are just as many which teach players about economics, trade, or even business management. With so many differing depictions I think Ubisoft is right to step up to the challenge of authentic representation. This is not to say that Assassin’s Creed can’t feature a few historically inaccurate liaisons with Cleopatra or the odd conversation with the goddess Juno, but where a game takes up the role of depicting a real culture and history they have a responsibility to authenticity.

Assassin’s Creed: Origins is taking an admirable step in bringing games that much closer to being living exhibits of accurate and interactive information. Of course, we’ll always want the fun of challenging gameplay and the madness of a typical Assassin’s Creed story, but the addition of a separate Discovery Tour mode will bring so many more resources to the hands of players who might be witnessing the world of ancient Egypt for the first time. In many ways, games began my education in history, and if games can awaken a love of history and mythology in others as they have done me, then I can see Assassin’s Creed: Origins going on to stand the test of time.

Assassin’s Creed: Origins launches on October 27th, and its Discovery Tour mode will be released in early 2018.