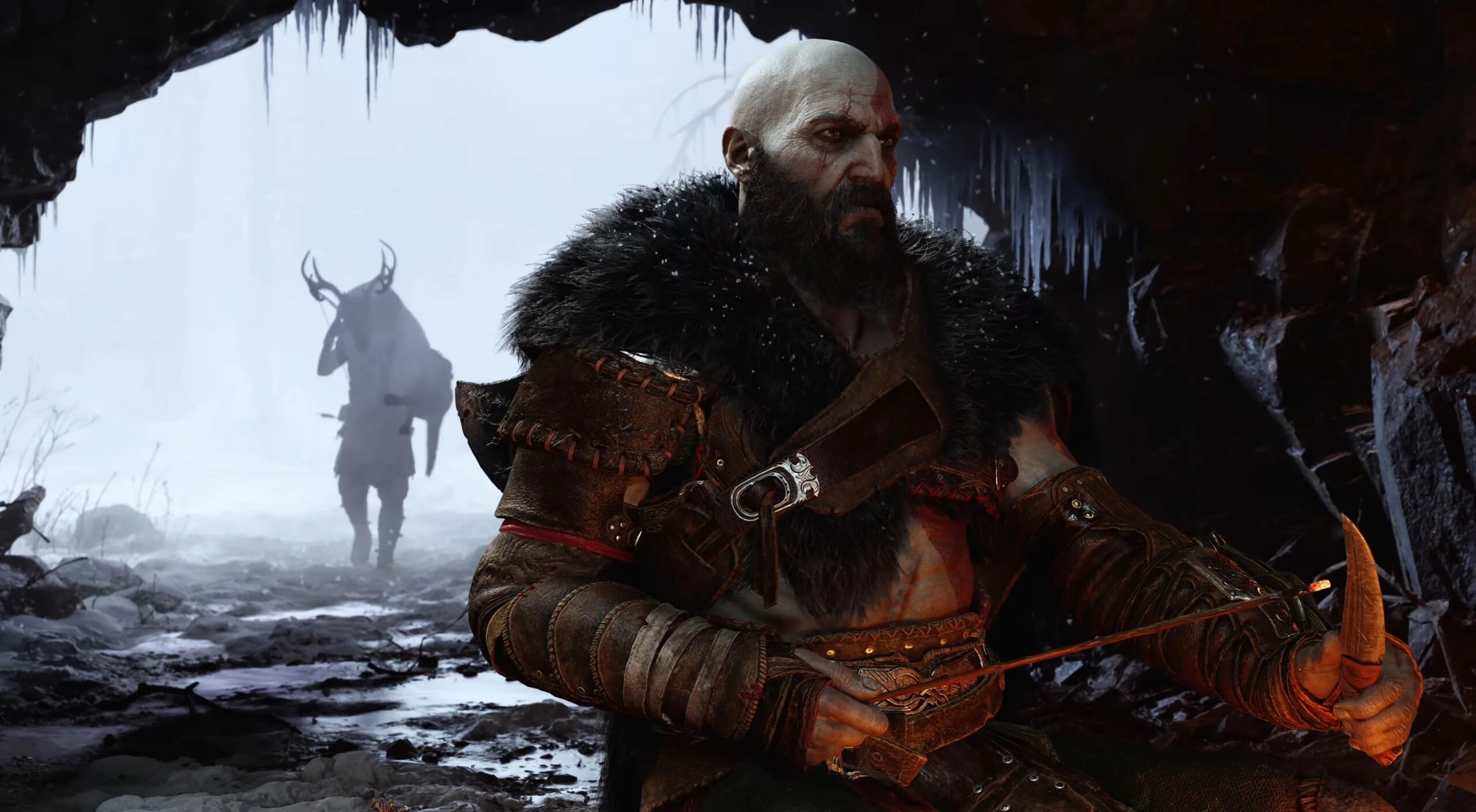 For fifteen years, Kratos, the Ghost of Sparta, has been hacking and slashing his way through beasts, gods, and demigods with little regard for whoever stands in the way of his quest for revenge. In 2018’s God of War reboot, this characterization shifted, with Kratos depicted as much more well-rounded, a man capable of growth. God of War Ragnarök, the much-anticipated sequel, further deepens our protagonist.

While Kratos’ relationship with his son, Atreus, and the other denizens of the Nine Realms will no doubt be dissected for some time to come, it is Kratos’ relationship with himself, his past, and his culture that emerges as something of a surprise over the course of Ragnarök‘s narrative. We’ve always known Kratos as a powerful warrior, but to see him reckon with his history as a Spartan in a few brief scenes is riveting.

While waiting out the harsh storms of Fimbulwinter with his son and their wolves, Kratos almost acts as though he’s done this before. To some extent, he has: part of his upbringing required him to be more enduring than the average youth. Scholars of the Ancient Greeks agree that growing up male in Spartan society was unforgiving at best, as children were taken from their parents and placed under the care of the state at an extremely young age. Infants deemed physically unfit were left to fend for themselves outside the city, essentially a death sentence.

Kratos does not share many specific details of his upbringing with Atreus or Mimir, but the player can speculate. It is clear that Kratos was among the few who were strong enough to climb the ranks as a soldier, eventually becoming a wartime general. But the Kratos of the Norse mythos is reluctant to even mention it. With Odin, Thor, Freya, and the elements themselves pressing in, Atreus is dissatisfied with Kratos’ seeming complacency. Atreus urges Kratos to stop thinking from a defensive perspective and to go on the offensive. He wants him to fight, without fully comprehending what that means to Kratos.

The Kratos depicted early in Ragnarök is exhausted. Constantly on his back foot, the bags under his eyes and weary demeanor in some cutscenes seem to indicate that the Spartan who scaled Mount Olympus has forgotten his roots. But what Kratos quickly makes clear as the plot progresses is that he never forgot his upbringing and training; he has simply been biding his time to call upon those skills again.

No one is responsible for the pain inflicted on them as children. Kratos seems to acknowledge that the severe training and possible abuse he endured as a youth contributed to the man he is today, but he does not endorse the practice. In the time since he and Atreus spread Faye’s ashes on a mountaintop in Jötunheim, Kratos has made strides to set the way he raises and trains Atreus apart from the harsh Spartan upbringing he and so many other soldiers made it through.

There is a mix of pride and revulsion present whenever Kratos refers to the past. Every character in Ragnarök is chatty, and even the taciturn Kratos divulges more here than he did in his previous adventure. When pressed for details about his upbringing, Kratos offers few specifics, but his clipped answers to Atreus’ probing say more than enough. Kratos likely had to stand by and watch as the weakest links in his barracks were weaned out, for the sake of the Spartan military. It is possible that Kratos himself did the culling, as his leadership would depend on it.

History suggests that while the Spartan way of life was not as oiled and muscly as the film 300 might imply, the way that film depicted a society hell-bent on raising tough warriors was fairly on-target. Kratos embodies the iron will of the Spartans, even if he is resistant to passing those lessons on to his son. When Atreus’ wolf Fenrir dies during the opening half hour of the story, Kratos urges Atreus to “close his heart to it.” Harsh advice, but for Kratos, grief is a luxury that he is ill-equipped to understand as Ragnarök looms ever closer.

But though Kratos rarely celebrates his Spartan upbringing, there is a turning point in how he views it. Midway through Ragnarök, Kratos and Brok embark on a quest to visit a mysterious Lady. The group needs a weapon capable of killing Heimdall, one of Odin’s most powerful (and most irritating) warriors. Brok has brought along Draupnir, a ring that makes copies of itself, and Kratos accompanies the Dwarf to the heart of the forge in the hopes of crafting such a tool. After finally finishing their journey, the weapon is complete: a powerful spear that doesn’t need to be recalled like the Leviathan Axe because as soon as Kratos throws it, another spear is created in its place.

The spear is a blast to use. It has great reach as a melee weapon and amazing utility as a ranged one. It unlocks a bunch of traversal option, allowing Kratos to embed a spear in the cracks of a wall to swing over gaps. But obtaining the weapon also unlocks something in Kratos. When Brok asks Kratos if he’s ever used a spear before, the god exclaims that a spear was one of the first things he held in his hands as a Spartan youth. There is something in Kratos’ voice here: could it be pride? After decades of burying how he was raised, he remembers with pride something he accomplished as a Spartan: physical mastery over his body by using incredible discipline. Before he was a tool for the gods of Olympus, Kratos the Spartan was a warrior who inspired men to be the best they could be.

This exchange between Brok and Kratos is brief, but it indicates the Spartan’s journey for the rest of Ragnarök. The Nine Realms are facing a threat like never before, and meeting it will require more than a well-stocked cave. For Kratos and Atreus to survive Fimbulwinter and defeat Odin’s machinations, they will need the strength and leadership of a true Spartan general. As Kratos learns to accept his upbringing over the course of the game, he becomes that man once again. The soldierly virtues of strength, endurance, and solidarity have been internalized so that the god can finally bring them to bear in his greatest battle yet.