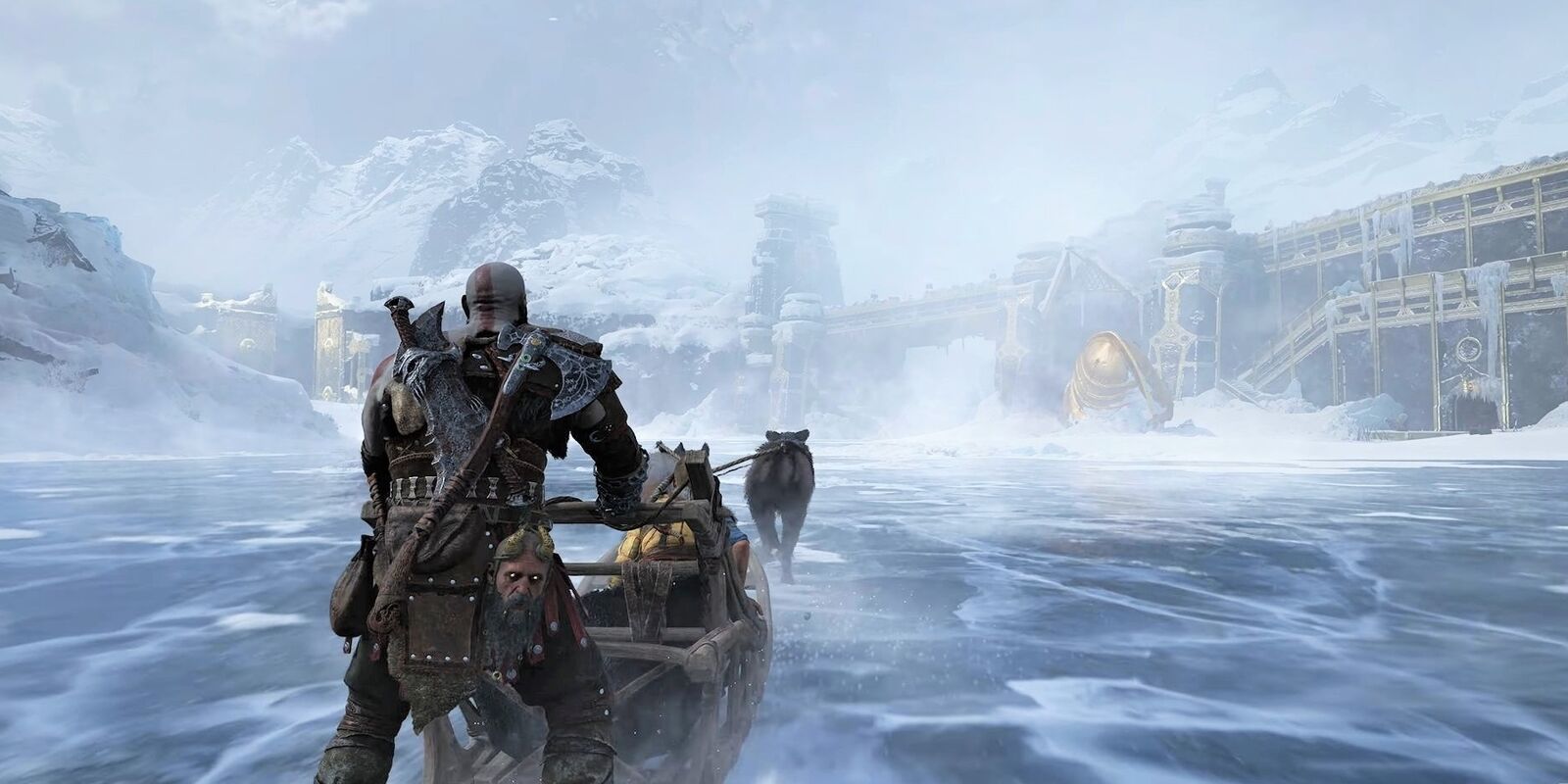 It’s that time of year again, when the world outside turns icy and cold and we huddle up in our homes, perhaps by the fire, cozy and warm, with family, friends, and our favorite video games. Some of you may have already had snow, others may still be waiting, hoping. But with the magic of video games, players can enjoy the snow all year round, and every Christmas can be a white Christmas. There’s something strangely comforting about playing games set in the snow when all around you is frosty and bitterly cold, yet you, yourself, are safe and warm inside.

I love snow in video games. I love the look of it, and the sound of it, almost as much as I do in real life. And I love to test it. Does the main character leave footprints as they trek through the vast winter wonderlands, or better yet, do they carve out a snowy furrow – like Connor in Assassin’s Creed 3 or Aloy in Horizon Zero Dawn? Can clumps of snow be knocked off trees like in Red Dead Redemption 2? Or can it slide in sheets off the rooftops as in Battlefield V?

Snow levels are more than just visual, they change the way a game feels. That can either be literally, with changes to the game’s core gameplay and mechanics, or emotionally, with the way it can alter the narrative and tone.

Snow as Deep as the Story

Narratively speaking, snow levels often come at the lowest point in a story. The bleak and bitter harshness of winter can less than subtly mirror the pain and hardships the protagonists are currently facing. Think The Last of Us Part 1 – winter comes right at the nadir of Joel and Ellie’s journey, with Joel injured and near death, and Ellie having to scavenge and forage for food for them both while trying to keep him alive. And their situation only gets worse as the storms pick up and the snow deepens, and Ellie meets the unassuming David.

Similarly, players only venture to the snowy northern island in Ghost of Tsushima at the very end of Act 2, when Jin shows how far from the samurai code he has truly fallen, has been forced to kill an old friend, failed his uncle, and has truly lost everything. Even his horse. The muted color palette that snow levels bring reflects the hopelessness the characters feel in these situations, and the inherent hostility of harsh, freezing weather manifests their internal struggles as something physical to endure.

Typically, if a game doesn’t end with a snow level, its sequel will start with one. And this happens far too many times to be sheer coincidence. Think back to Uncharted 2, Red Dead Redemption 2, The Last of Us Part 2, and even this year’s God of War Ragnarök. These games are all sequels, and thus, in most cases, players already know these characters well, and understand their personalities and what they fight for. And if the previous game ended on a happy note, then a bleak snow level opening can immediately raise the stakes both on an emotional and visual level.

That Warm Feeling Inside, Despite the Cold

Of course, snow and ice and frosty weather don’t have to indicate hardship and loss, they can also be cozy. Games like Animal Crossing and Stardew Valley play with the lighter side of snow. In these games, winter is a time for merriment and joy, for making new friends and spending time with the old. Feasts and festivities, gifts and games, the snowy weather here is presented as an opportunity for fun! For the nostalgia of winters past and the childlike wonder of snowball fights and snowmen-building competitions.

Animal Crossing: New Horizons delights players year-round with its seasonal content, but it’s winter when it truly feels its warmest (in that wonderfully snug and cozy sense of the word, naturally). Seeing your little island transformed by a thick layer of white snow, visiting friends in festive jumpers, building snowmen in your garden – it perfectly captures the fun of the season. And that’s not even mentioning the joys of Turkey Day and Toy Day, and all the amazing new clothes, decorations, and recipes you can uncover.

Crops and plants may not grow in winter, but friendships still can.

Gameplay and Mechanics are Snow Joke

Narratives aside, snow levels can have a large impact on the way these games are played. Sometimes the snow and ice are just there for decoration, a frozen backdrop, but snow levels work best when they alter the gameplay, too.

Deep snow should affect movement and make terrain difficult, or nigh impossible, to cross conventionally. Assassin’s Creed 3 does this well. In that game’s winter sections, heavy snowfall buries the wild Frontier, and trying to get anywhere on foot is a fool’s game as Connor struggles to push himself through the icy heaps. Instead, players must take to the treetops, hop from branch to branch, and reach their destination without ever touching the ground. As enemies are unable to climb trees, canny players can run rings around their slow-moving foes, taking them out one by one from above, like a frosty Predator.

Ice should be a hazard. Frozen lakes can be dangerous places, but most of all slippery places. And no game series knows this better than Pokémon. It seems that every entry is required by GameFreak law to have at least one ice-sliding puzzle hiding somewhere in the world, be that atop a distant mountain or within an ice-type Gym. Slipping and sliding from one side of an enclosed section to the other makes for a great puzzle, with players always having to think two or three moves ahead if they ever want to leave the ice. The more recent games in the series have moved away from these puzzles as 3D character models have more control over their direction than 2D sprites, but it’s a shame. At this point, they almost feel like tradition.

Some games take the harshness of winter further and turn it into an actual mechanic. In these games, snow levels are places to endure, places that fight back. Like a real-life expedition to the arctic, players must prepare in advance if they have any hopes of surviving and making it through to the other side.

Red Dead Redemption 2 may not exactly fall into the survival category, but in their drive towards realism, developers Rockstar couldn’t help but throw a few elements from the genre in the mix. Players who dare to venture into the snowy mountains in the northwest corner of the map need to make sure they are wearing the correct attire. Anyone who thinks they can brave the cold in nothing but a flannel shirt and leather Stetson better think twice, because the snow in RDR2 will rapidly drain Arthur’s stamina and vitality if he lingers underdressed. If this happens, his health will no longer regenerate, making future gunfights decidedly deadlier than they need to be. It’s a small thing, forcing the player to change their outfit to suit the weather, but it can really get them into the head of the character, and adds to the fun of roleplaying.

If you want a game that takes its cold weather even more seriously, then look no further than The Legend of Zelda: Breath of the Wild. In this epic open-world masterpiece, Link will find himself having to traverse a continent’s worth of different terrains, each with its own environmental hazards to overcome. Like in RDR2, snowy levels are the most hostile of the lot. In Breath of the Wild, cold kills. Link will literally freeze to death if players don’t prepare themselves adequately, as every second in the chilling climes will see his health slowly sapped away. And falling into icy lakes and rivers only speeds up his inevitable demise.

If they hope to survive, players will have to bundle Link up in warm and toasty clothes, heat him up from within with a hearty, spicy meal, or keep the cold temporarily at bay with a torch or flaming weapon. They might even have to use their powers or the environment itself to find another way around completely. Again, this may not add a whole lot to the overall gameplay, but it does wonders for getting the player invested and making them feel like they are the ones trying to survive, not just the vaguely elven collection of pixels they see on screen.

Snow levels come in all shapes and sizes, and whether they exist as an obstacle, to highlight the fragility of life, or to remind us of the love and kindness of others, they always have something important to say. And as long as there are video games (especially sequels) there will always be snow levels.