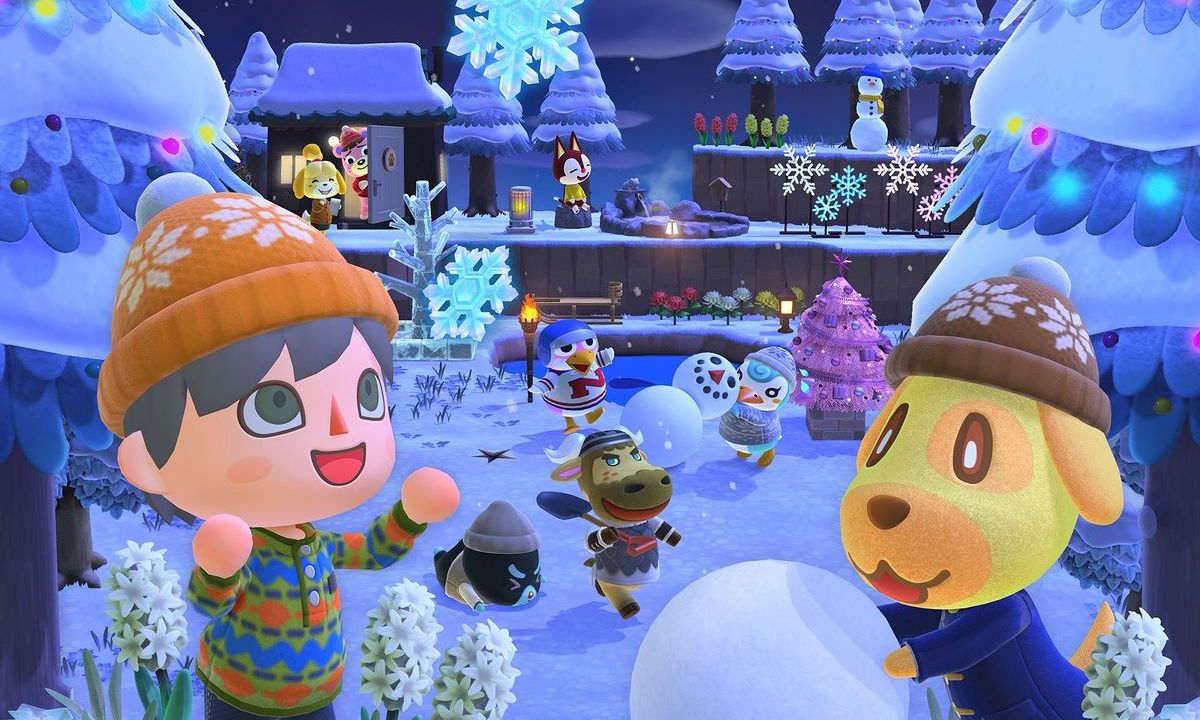 Hang the wreaths and shake the ornament trees because Toy Day is finally here today! Every December, the world of Animal Crossing lights bright to the cheer of the fan-favorite holiday Toy Day. Whether you may celebrate it or not, the Nintendo Christmas-esque occasion brings along the best music and winter atmosphere to cozy up to during the end of the year. As the snow coats our islands and Jingle the black-nosed reindeer makes his descent for one night, it is the perfect time to look back on Animal Crossing’s complete history of Toy Day.

Rather than traditionally starting on December 24th, Toy Day festivities begin a day prior in the original Animal Crossing for the Nintendo GameCube. This is the only instance in the franchise’s history where the holiday has an event before its main day. Like on the game’s other holidays, players can meet up with Tortimer at the fountain tree plaza on the eve of Toy Day to receive one gift. Depending on the player’s gender, males will receive a replica item of Gracie’s Car while females will be given a doll.

The next day, December 24th, Jingle will make landfall in the player’s town after 8 p.m. While the player may initially think they can only receive one gift from Jingle, the reindeer can be fooled into giving them four more. By exiting the acre he stands in and performing a full outfit swap out of his view, players can interact with Jingle more than once and choose alternate text options to receive more items. The reindeer will at first be skeptical of whether or not he has seen you before but will ultimately give in to the holiday cheer and offer you a gift. It was a simpler time with many restraints and few items, but the first iteration of Toy Day did establish its iconic theme and reindeer to look forward to every year!

Upsettingly known to fans of the title, Animal Crossing’s first endeavor on a handheld system removed holidays from the entirety of the game due to time constraints and localization issues. Instead of Halloween, The Harvest Festival, or even Toy Day, Animal Crossing: Wild World for the Nintendo DS contained several made-up holidays that could accommodate for its release schedule. The reason for New Year’s being the only legitimate holiday in Animal Crossing: Wild World was due to it being globally celebrated. You may not be able to log in and see Jingle during December, but there is one winter holiday in the game to wait for.

Two months later in February, the holiday season lights illuminate with the “Bright Nights” event. Bright Nights takes place on the second Monday of February and falls in line with the quirkier aspects of Wild World’s festivities. The occasion has every villager in town placing holiday lights on their home for a big competition judged by each other and Tortimer. Before Saturday, players could visit Tortimer, who would ask them to vote on their favorite house. The only reward players could obtain from participating is a random gift from the winner. Even if the festive-ish event does not compare to Toy Day, at least players had something to look forward to during the winter season outside of New Year’s fireworks.

Like with Animal Crossing for the Nintendo GameCube, City Folk had players flat out cheating Jingle for some extra holiday presents. Aside from some new items to collect and add to the player’s home, Animal Crossing: City Folk did not change how Toy Day worked. However, there were two new additions to Toy Day that was made during this entry. Firstly, If the player were to change into the same outfit they used for their first present after receiving the second gift, Jingle would no longer provide them with any more items. Secondly, players can find Jingle leaving gifts in homes. Whether a villager’s lights are on or not, the player can walk inside any house while Jingle is in the village.

After City Folk though, Toy Day changed forever with Animal Crossing’s jump back to handhelds.

Toy Day activities took a massive turn in terms of complexity when Animal Crossing made its debut on the Nintendo 3DS. With the fleshed-out and franchise favorite Animal Crossing: New Leaf, players were no longer scamming Jingle into multiple presents or just simply walking around listening to the holiday’s theme. New Leaf changed Toy Day to be a multi-step series of objectives that practically lasted all throughout December. Like holiday shopping for close friends and family, Toy Day became a grander picture that required thought and patience to finish.

At the beginning of the month, the Able Sisters shop and Kicks will start selling Santa Claus outfit pieces (hat, beard, coat, pants, and boots) for players to purchase — the items did not show up every day, but they were guaranteed to appear before Toy Day occurred. Not only would players have to purchase all five items throughout the month, but they would have to talk to villagers daily to get an understanding of what exactly they wanted for Toy Day. By gathering information and the proper festivity suit, players would only then be able to successfully participate as Jingle’s newest helper.

With Santa’s sack in hand after speaking with Jingle, the player is tasked with going around to every villager and delivering the correct present they alluded to throughout the month. The process is long, tedious, and easy to mess up, but arguably the most satisfying holiday to complete in any Animal Crossing game. One wrong move could even bar you from getting Jingle’s main thank you present.

Animal Crossing: New Leaf only has two rewards for successfully completing Toy Day — one of which can only be obtained by finishing the event’s requirements to Jingle’s maximum satisfaction. For giving out every item to villagers, Jingle will gift the player with a furniture item from either the Festive or Jingle set of furniture. However, for those who gave the correct item to every villager, Jingle will drop a thank you note in the player’s mailbox on the following day that contains the Jingle’s Photo item.

Taking a look at the franchise’s first spin-off game, Animal Crossing: Happy Home Designer for the Nintendo 3DS interestingly skipped utilizing holidays as a whole. Toy Day does not exactly have a specific day of celebration in the game because players can customize a house inspired by the holiday with select villagers. The only way to see Jingle himself on December 24th is by using his amiibo card. For players who do have the physical item, they can meet up with the black-nosed reindeer at any time of the year to customize his requested dream home. Did you know that Jingle’s favorite song is K.K. Birthday? We’re surprised it wasn’t one of the more jazzy covers too.

Yep, Toy Day is actually in the critically panned Animal Crossing: Amiibo Festival game for Wii U! Much like the game itself, while there is nothing to do when the holiday makes the rounds on December 24th of the month, Jingle will visit the Town Plaza and award every participating player with a bunch of turnips before walking off with a final happy holidays message. Jingle’s appearance is short and sweet — there is nothing else to say about Toy Day here, and perhaps that is for the better.

Despite Toy Day not making an actual appearance, Animal Crossing’s free-to-play mobile entry Pocket Camp for IOS and Android phones does contain holiday-themed furniture and an event featuring Jingle to complete. Like the game’s other items, players can of course gather or pay up real money for currency to unlock the Festive and Jingle-themed furniture sets. Animal Crossing: Pocket Camp also has a handful of exclusive holiday items including the Jingle Balloon which has special animations.

Available to players during the winter season is “Jingle’s Toy Day Treasures”, a quest that will have players doing the same objectives the game typically provides except of course this time for Jingle. By collecting items and helping other villagers, the player will eventually be able to decorate Jingle’s campsite for some Toy Day cheer. Even if Animal Crossing: Pocket Camp may not contain anything as spectacular as New Leaf for Toy Day, its small presence and charming items do deserve a spotlight (and hey, it’s more than Wild World!).

Last but not least is the latest entry in the series, Animal Crossing: New Horizons. As to be expected by this entry and its methods of harkening back on previous entries, Toy Day here is similar but far less complicated than what New Leaf had to offer.

Toy Day in Animal Crossing: New Horizons revolves around a set of items the player can purchase during December from Nook’s Cranny. The “Toy” themed item lineup is always found on the blue placement mat at the bottom left-hand corner of the store. After having enough gifts and once again collecting the Santa costume from the Able Sisters shop (sorry Kicks, but we don’t need you this time around to find boots!) the player can complete the main Toy Day event.

By speaking to Jingle outside of the Town Plaza, players will be tasked with wrapping gifts in festive paper. After that, they will go around and hand out gifts to every villager on the island — even though they hyped up the event, there are no specific gifts to give to villagers. Additionally, New Horizons added a gift trading feature with villagers that will help players collect every color variant of the holiday items after helping Jingle. Each toy has a slew of unique paint job variations to collect without the need for the typical customization method.

Like the other Animal Crossing games, players can obtain items part of the Festive and Jingle furniture sets throughout the month. This time around, however, the items can be crafted through DIY projects. Meanwhile, the exclusive reward for helping Jingle prepare and hand out every gift on the island is the Jingle Sleigh and Toy Day Stockings.

New Horizons also has a secret holiday item to obtain though being the returning Jingle’s Photo from Animal Crossing: New Leaf. The way to receive the item is quite unobvious — in fact, you probably missed getting it last year when the opportunity was wide open. If you hung up Jingle’s Toy Day stalkings the day after the holiday, be sure to interact with them. If the player does, they will find Jingle’s Photo within the stockings.

Be sure to check out Toy Day this year! Happy holidays!