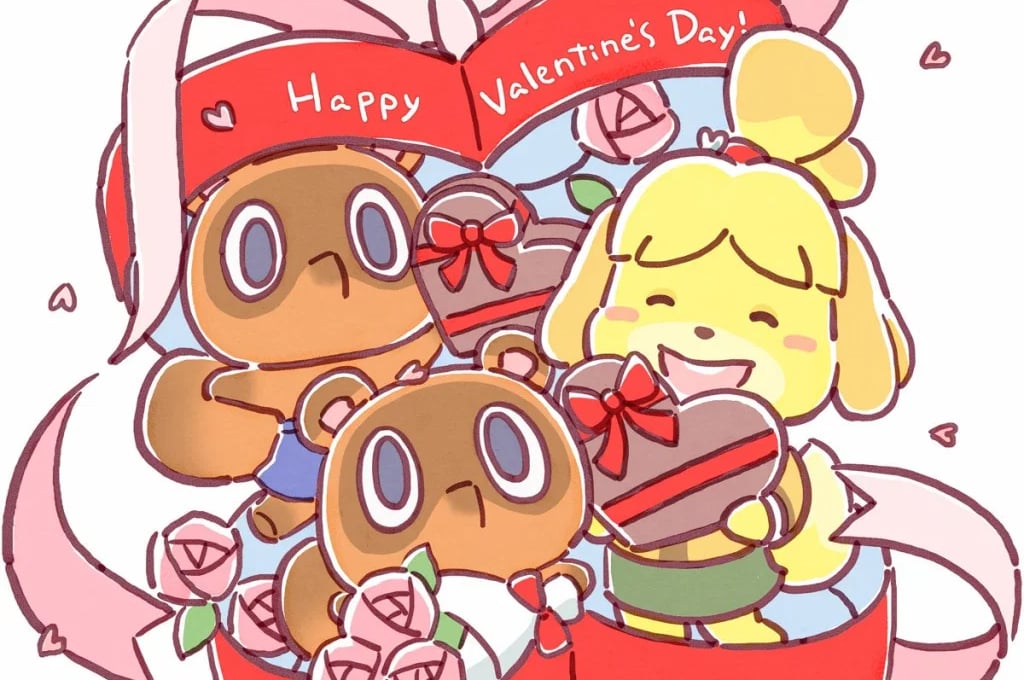 Make that special someone feel like a million bells or scoop them up to be a permanent catch. Love is in the air this month for all Animal Crossing players as the holiday of Valentine’s Day quietly arrives on February 14th. While a big blowout event may not occur on the holiday, there are still Valentine’s Day activities to participate in throughout the vast majority of the franchise’s entires. From the original GameCube game to New Horizons, this is the heartwarming (and sometimes even heartbreaking) history of Valentine’s Day throughout Animal Crossing.

In the original Animal Crossing for Nintendo GameCube, villagers will begin talking about Valentine’s Day up to two weeks before February 14th occurs. While they may make the occasion sound like it will be a big deal, Valentine’s Day is an event that entirely takes place through the morning mail system. In the coming days before the holiday, friendly neighborhood pelican Postman Pete will advise players to clear out their mailboxes for a potential storm of letters.

In Animal Crossing, players will receive a letter on Valentine’s Day from every villager in their town who is of the opposite gender–and yes, that can mean a full mailbox of letters. What the player will obtain in the mail is dependent on how much their relationship with a villager has grown. Villagers who the player has a poor or fair relationship with will send clothing items on Valentine’s Day. Meanwhile, those with a good friendship will send furniture items. Animal Crossing’s Valentine’s Day was rather unsentimental, but at least there was value to be found!

With Animal Crossing’s first entry on the Nintendo DS, Wild World’s lack of holidays affected smaller-scale events found in the previous game such as Valentine’s Day. On February 14th, the player will receive no special items, letters, or dialogue in Wild World–Valentine’s Day is disappointingly never acknowledged in any form. However, when the holiday made a return next, it dramatically changed to focus on more intimate relationships.

Moving forward with a few permanent additions to the mainline series, Animal Crossing: City Folk added a special consumable drink to the game when visiting the Rooste Café on Valentine’s Day. Rather than drinking one of Brewster’s various coffee aromas, the quiet concierge pigeon serves the player a hot chocolate beverage before wishing them a happy holiday.

Before grabbing that sweet serving though, players could open their mailboxes to find a singular Valentine’s Day letter. Rather than receiving mail from every male or female animal in town, one villager of the opposite gender who has the highest friendship status with the player will send a Chocolate Heart item. The Chocolate Heart cannot be placed in the player’s house as a furniture item like in New Horizons, as it is meant to be eaten. Like eating fruit though, the Chocolate Heart does not provide any benefits.

In an unfortunate set of circumstances, Animal Crossing: City Folk’s true Valentine’s Day items were only distributed over Nintendo’s online WiiConnect24 service as downloadable goodies–which is no longer available through conventional means, but hey they were readily there for a select period of time! North American players were once able to receive a Cupid Bench, while Japan got the Chocolate Heart item that became a staple gift in future games. Strangely enough, South Korean players were able to obtain the first variation of the Flower Boquet.

Animal Crossing: New Leaf carried over City Folk’s Valentine’s Day activities but made a few minor additions and one change to the holiday. Sticking to the tradition of altering what mail the player will receive, New Leaf gifts players two extra letters from Isabelle and Mom. Isabelle delivers the mayor a message of appreciation and a Chocolate Cake item while Mom sends a letter containing either a Cacao Tree, Spring Shirt (if the player is female), or Uncommon Shirt (if the player is male). The only change made to the event was that villagers who have the highest friendship with the player can now gift various items outside of chocolate like rare flowers.

Being the second Animal Crossing game with no traditional holidays, Happy Home Designer does not contain Valentine’s Day in any capacity. However, a “hearts” theme for villager homes along with the Cute Furniture Set is available for players to use. The game may not acknowledge the holiday, but at least the Happy Home Academy can help players artificially celebrate with the familiar thematic esthetic.

Like many of the other holidays in Animal Crossing: Amiibo Festival, February 14th contains multiple Valentine’s Day activities players can see during the calendar day’s event spaces. While nothing extravagant or noteworthy happens on the holiday, the player’s character can be seen engaging in activities such as receiving a chocolate cake or browsing sweets at the Retail shop. All the activities involve harmless shopping and villagers gifting sugary treats–nothing more and nothing less.

As to be expected with Animal Crossing: Pocket Camp, the franchise’s mobile title has been updated every year since its release to include new Valentine’s Day items and holiday quests. In the past, “Pelly’s Flight of Passion” and the “Valentine’s Jam Session Gyroidite Scavenger Hunt” had players running around crafting items revolving around the holiday’s theme of love and hearts. Every year, a handful of the previous items have become readily available again throughout February, however, each full collection has never reappeared.

Every year in New Horizons players can purchase several color variations of the heart-shaped bouquet and chocolate heart items from the Nook Shopping catalog before February 14th. However, players can also receive a variation of each item for free on Valentine’s Day. Isabelle and one villager the player has a high friendship with will send the player a Heart-shaped Bouquet and Chocolate Heart. While Isabelle’s flowers are guaranteed each year, players will have to keep up their friendships before the holiday to ensure that someone will send them a Chocolate Heart.

As can be seen above, the two items are perfect for presenting that special someone with some Animal Crossing delight! Now with New Horizons‘ online mailing capabilities, players can cheekily send out packages to their Valentines too!

Cuphead: The Delicious Last Course is a Meal Worth the Wait