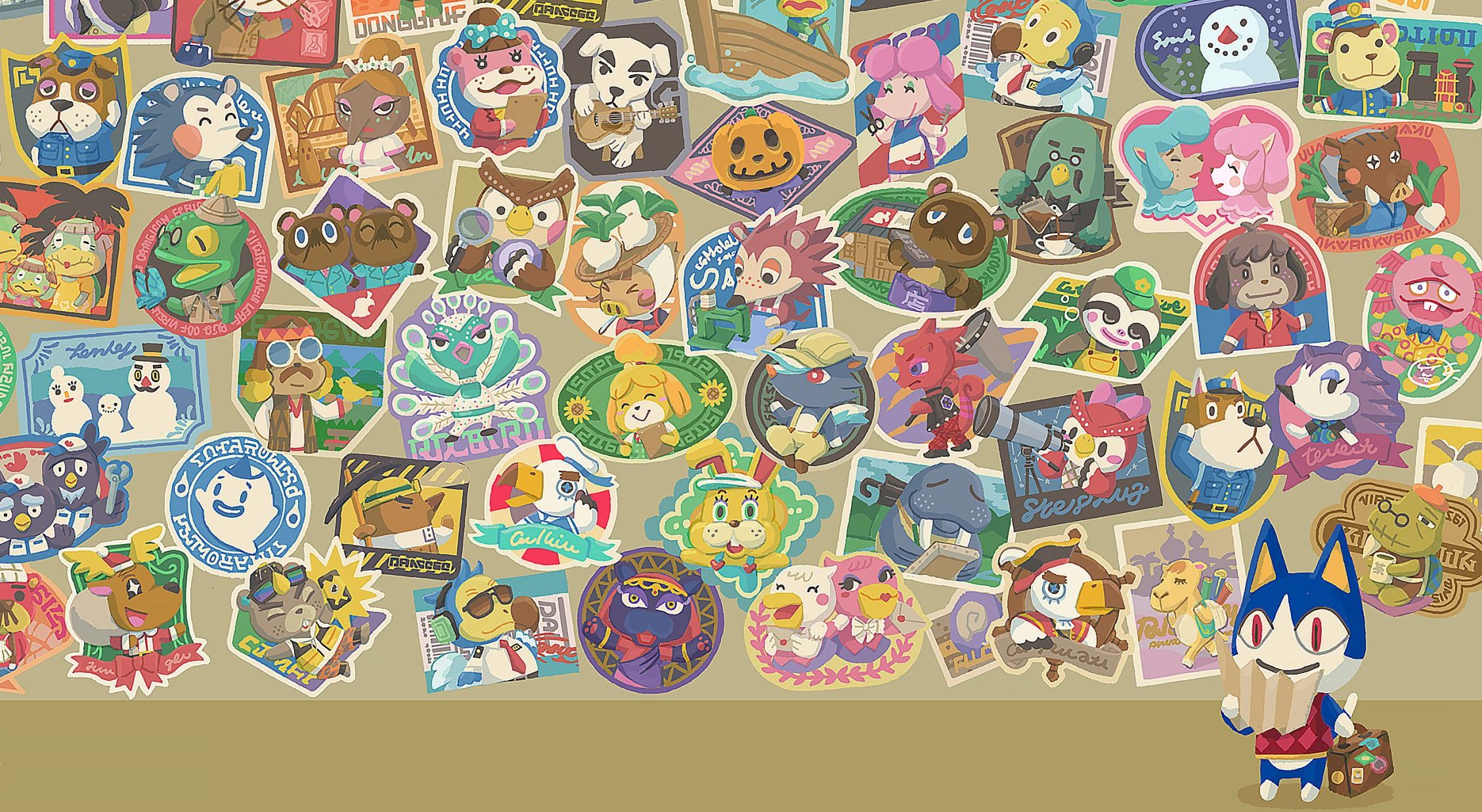 Pour the champagne and hold a glass high. It is time to celebrate the arrival of 2022! Since the franchise’s inception, Animal Crossing has always ushered in the upcoming year with an in-game countdown board and fireworks display. While the celebrations have significantly changed over time, the series has upheld several traditions with each new entry as it continues to take note of the real world holiday. This is how New Year’s Eve and New Year’s Day have evolved throughout every Animal Crossing game.

Starting with Animal Crossing on the Nintendo GameCube (and its Nintendo 64 counterpart in Japan), after 11:00 p.m. a cutscene will initiate in which Phyllis announces that New Year’s Eve celebrations are commencing. As special music dedicated to the occasion begins, players can head over to the town’s pond to meet up with Tortimer, who will be standing across the water from a countdown board. If the player speaks with the mayor, they will receive a noisemaker item to use. Until one minute from midnight, when less than 15 seconds are left on the countdown board, the music silences and a beep will be emitted with each second that passes.

Of course, once the clock hits midnight, one last loud beep will go off before the text on the countdown board flips to give players a new message. As soon as the town clock plays the first town tune of the year, the promised fireworks will begin. Players can watch the fireworks through the pond’s reflection until exactly 1:00 a.m. Interestingly enough, the villagers do not whistle the town tune that plays from the town clock’s bell on New Year’s. Instead, they will whistle a tune that sounds similar to the song “Auld Lang Syne”.

As for New Year’s Day, in Animal Crossing villagers will gather around the wishing well between 6 a.m. and 11 a.m. to finally make use of the fountain itself. By talking to the villager who is next up to make a wish, the player can cut the line and throw in a coin. The fortune-teller Katrina is also available on New Year’s Day on the upper left side of the plaza. The iconic panther sits near the wishing well to read the player’s fortune for the year. Additionally, she will give the player a fortune written on the stationery Fortune Paper item. This piece of stationery can only be obtained during this event.

Outside of the wishing well event, the player will receive 10,000 Bells from their Mom in the mail and can speak with Tortimer to receive a random diary entry. Finally, if the player has upgraded Nook’s shop, Tom Nook will sell Mystery Bags in his shop during New Year’s Day.

Animal Crossing: Wild World for the Nintendo DS has been notoriously known for either heavily downgrading or not including holidays. While New Year’s Eve and New Year’s Day are the only global events to make it into the game, the two had received quite a few cutbacks in terms of interactivity. After 6:00 a.m., Pelly will announce from the Town Hall loudspeaker that the New Year’s countdown has begun. Like in the last entry, a countdown board can be found outside the building with Tortimer appearing next to it. The mayor will provide the player with party poppers to stock up on.

At 11:00 p.m., Pelly will make another announcement regarding the celebration, and special music will begin. Villagers who are spending their first New Year’s Eve celebration in the town will meet up with the player at the plaza. Unlike Animal Crossing for the Nintendo GameCube, Wild World contains extra unique music that will initiate at 11:50 and 11:55 p.m. Of course, the silence of the music and countdown board beeps will happen during the year’s final few seconds. Once the new year arrives, a two-hour-long fireworks display will occur, and the Nintendo DS’s top screen will read “New Year”. Unlike the GameCube game, villagers will only wish the player a Happy New Year when spoken to — they do not dance around or use any items.

Whereas December 31st upholds traditions, New Year’s Day had some significant drawbacks in Wild World. The only event happening on January 1st is that Tortimer will be handing out free fortunes. The player can speak with the mayor multiple times throughout the day to hear different outcomes. It could be worse though… right?

Despite the jump back to consoles, Wild World’s successor sadly suffered when bringing back holidays to the series. Animal Crossing: City Folk for the Nintendo Wii more or less copy and pasted over what was featured in Wild World’s New Year’s Eve celebration. City Folk disappointingly did not add back in any of the original game’s festivities or features including the mere act of having villagers prance around to the fireworks.

While it may be a slight upgrade from Wild World, City Folk’s New Year’s Day was upsettingly nothing to write home about either. After opening up the mailbox and receiving a small sum of 1,000 bells from Mom, on New Year’s Day the player can speak with Tortimer to receive a shirt that corresponds to the game’s year (fun fact though, the highest number the shirt goes up to is 2035).

After two rather barebones events, Animal Crossing: New Leaf took the two-part New Year’s celebration slightly back to its roots with a more soulful celebration. As expected with the title’s event structure, Isabelle will be standing next to a countdown board at the town tree plaza along with Crazy Redd, who is stationed in his own little market booth. Depending on the game cartridge’s region, Isabelle will give the player exclusive items such as Sparkling Cider for anyone living in North America. Meanwhile, Redd will provide the player with an opportunity to purchase one-time-use party poppers, and top hats and party hats that come in an assortment of different colors.

As midnight approaches, villagers will gather around the plaza wearing party hats to join in on the countdown and firework show. To end off the night, players who decide to visit Club LOL can find DJ K.K. playing a bumping remix of the Animal Crossing: New Leaf title theme. This particular track can only be heard on New Year’s Eve and cannot be obtained in any capacity for home use.

On New Year’s Day, any player who logged into New Leaf the night before will receive a letter from their mom. The gift that comes with the letter will either be 10,000 Bells or a house plant. At the plaza throughout the day, a special cutout is available to take photos with along with Isabelle. If the player chats with Isabelle, she will reward them with an animal based on the Chinese zodiac of the year.

Animal Crossing: Happy Home Designer was the first game in the franchise to not include holidays. While there are plenty of holiday-themed furniture sets to obtain (like the Jingle and Festive lines that are tied to Toy Day), there is disappointingly nothing in the game that relates to New Year’s Eve or New Year’s Day. Apologies to the villagers and home creators, but there is no firework shows to witness here.

Animal Crossing: Amiibo Festival sort of contains New Year’s Eve and New Year’s Day — at least to an extent that is more notable than Happy Home Designer when taking into account its in-game context. In the critically panned Wii U party game, when playing through a December board the final day of the month will have events that are themed around New Year’s Eve. As to be expected by the game, the new scenarios feature assets that were pulled directly from New Leaf’s New Year’s Eve event. As for New Year’s Day, while nothing, in particular, will happen on January 1st, the event is marked by a hat and party popper icon in the calendar. It’s better than nothing!

With seasonal updates constantly being added to the game, Animal Crossing: Pocket Camp for IOS & Android has naturally included New Year’s items since its launch. New items have been added every year to the game including this year’s specialties being 2021 balloons and a zodiac ox. While a handful of these items are no longer obtainable due to being only available on the numbered occasion, some of the special items have carried over to multiple other in-game events and quests to complete.

Animal Crossing: New Horizons finally achieved what many of the other entries should have done after all these years: make New Year’s feel like an actual celebration. While the event does more or less pull from New Leaf’s simple setup, villagers have been fleshed out to have more celebratory dialogue, costumes, and animations for the midnight event. After years of waiting, every villager on the island will be present for the New Year’s Eve countdown and fireworks show that happens directly outside a decorated Resident Services building.

Aside from music changes and the same items to purchase (this time from Tom Nook), New Horizons changed New Year’s for the better by expanding how big of a get-together its countdown can be. The simple act of having villagers wave in sync to a countdown with glowsticks and clap, sing, and dance for ongoing fireworks infinitely brought back the specialty of Animal Crossing’s New Year’s Eve event.

In regards to New Year’s Day, Animal Crossing: New Horizons has nothing too notable to offer when compared to its midnight celebration. However, New Year’s Day should not be discounted for what it initially accomplished before being slightly reworked in a later update. Unique music will replace the hourly themes throughout the day and the sky will glow bright canceling out any shadows that would be present during the morning and afternoon. Due to Resident Services being closed on the prior day, every player will also get to start the new year with an automatic seven-day Nook Miles login streak.

During New Horizon’s first year, players could purchase multiple regional themed seasonal items such as a bowl of 12 grapes and an olivier salad beginning New Year’s Day until January 15th. However, these items have since become implemented into the Nook Catalog with the 2021 seasonal updates. Now every region can rejoice with their dedicated heritage foods and furniture on New Year’s Eve as the items become available right after Toy Day, December 24th. Animal Crossing continues to unite audiences with its wide range of cultural items!

Happy New Year, and may 2022 bring you good fortune! Just remember… “Bad times are just times that are bad” so let’s look towards the future.