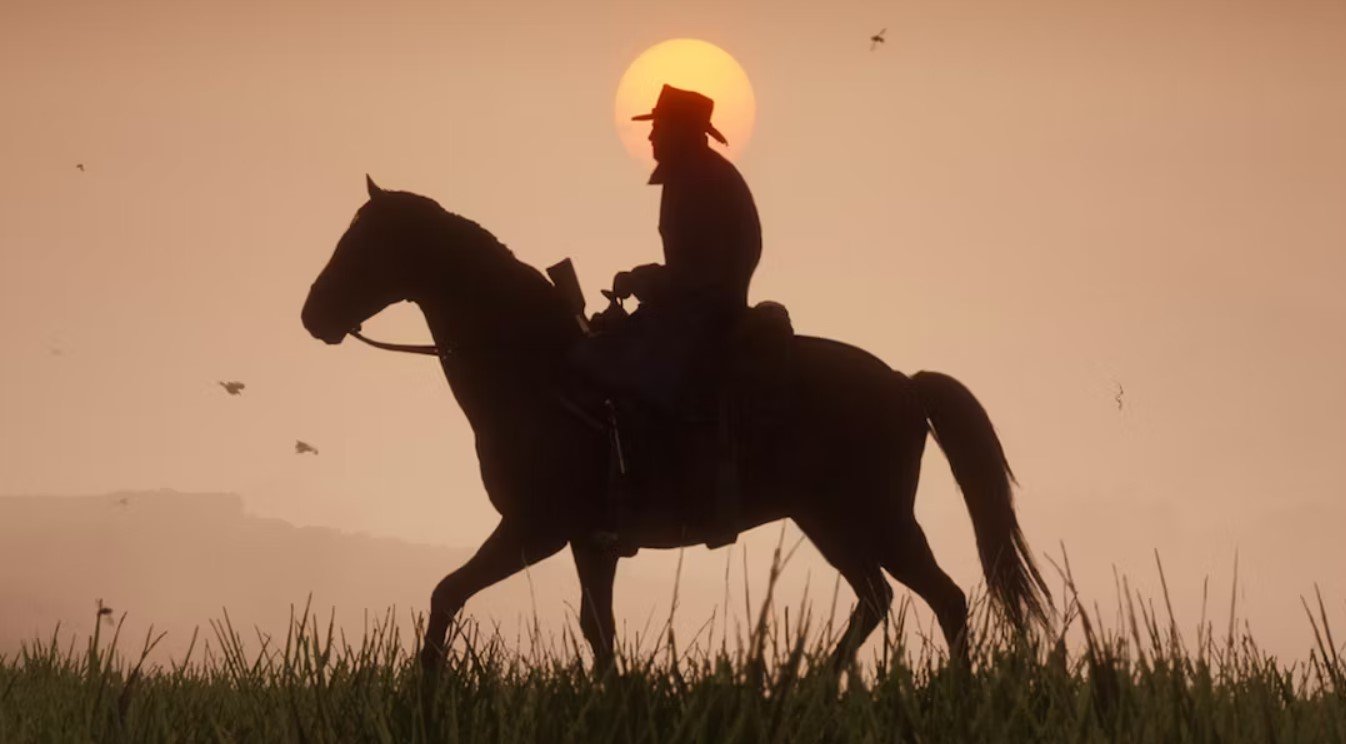 Why do we love riding horses in video games?

While replaying Assassin’s Creed 3 recently, I entered the Frontier for the first time as Connor and decided to “borrow” a horse from a nearby homestead. All at once, the world seemed to spread out and open up before me, and I was struck with the innate desire to stray from the beaten path and see what was out there.

Up until that point, I had been jumping from one main mission to the next, wanting to see the story through as quickly as possible, but that all changed when I began to ride. I took my time, slowed things down, and set out to see what I could discover. I hunted, met new NPCs, and completed side missions I otherwise would have skipped. Eventually, I strayed back to the main path and finished the story, but I was glad for the distraction; it made my experience revisiting that game all the richer.

Open worlds are big. And they’re only getting bigger. As developers attempt to cram them full of things to do to inflate playtime and keep players coming back for more, these worlds can feel a little overwhelming. So without something to draw them towards these distractions, many players will choose to ignore them in favor of the main story. This is where horses come into play.

Remove a player’s ability to fast-travel and they will be forced to make their own way across the world and, hopefully, engage with what they encounter along the way. But if the distance between objectives is too great, most players will stick to the beaten path and do whatever they can to minimize that journey. Give the player a horse, however, and suddenly that daunting expanse between them and their next objective is no longer quite so daunting. Suddenly, the whole world opens up.

Being on horseback allows a player to move freely and quickly across a digital landscape, gallop across mighty plains, and leap over crags and crevices, in order to reach their destination ten times faster than walking or running. This also means that anything that catches the player’s eye – that crumbling tower on the hill, that dimly-lit shack in the woods – becomes a detour they can reach and check out within a few seconds rather than something to ignore for now and try to find again later.

Horses instill a sense of speed and freedom in the player that drives home the idea that they really can go anywhere.

The Spirit of Adventure and Animation

Despite their prevalence in video games across the generations, horses are tricky to get right. But why do so many games get them wrong? Put simply, horses are weird. They are complex creatures with peculiar joints and musculature.

Horses are a massive weight supported on four shockingly slender legs. These legs have surprisingly little muscle for a creature that heavy, and which can run that fast. The upper thighs contain all the muscle, while the lower half of the leg is supported and granted movement by a series of incredibly tense and strong tendons. These work like rubber bands, stretching and snapping back in different ways for each of a horse’s different gaits.

Because of this, horses are difficult to animate correctly–far more so than other quadrupedal animals, who can be quite the pain to animate realistically. Horse legs have a lot of joints that have to bend down and spring up perfectly to allow the leg to move forward with each step and not just collapse under its own weight (Elden Ring‘s Torrent, for example, would collapse into a broken heap if his legs bent that way in real life). This gives horses an almost jovial spring to their steps, but it’s a springiness that many animators choose to leave out.

Why? Because it’s a lot of work to get right. Humans and other bipeds only need a couple of moving joints on each leg of a character model in order to move semi-realistically, whereas horses require around four per leg. This results in a lot of finicky programming and animation time that, for the most part, will largely go unnoticed by all but the most horse-obsessed players. And if the majority of players are going to be watching and interacting with the enemies and world around them rather than focusing on the horse beneath them, is all that extra time spent animating going to be worth it?

For most games, the answer is no. And that’s ok. Most developers don’t want to make an ultra-realistic sim, they know what part of their game players are going to be focusing on most and that’s where they are going to spend most of their time and resources. In most games, horses are just glorified vehicles to get from A to B.

Those games that take the time to get it right, however–like Breath of the Wild and Red Dead Redemption–can create horses that are breathtaking to watch in motion and really capture that wild spirit.

Horses as More Than Just a Furry Vehicle

In games like Assassin’s Creed Valhalla, riding through the forests and fens of England, building up speed and watching the Roman ruins whip by, can be an exhilarating experience. But once you reach your destination and dismount, Eivor’s horse, for all intents and purposes, ceases to exist. Yes, its model remains in the game (for a time) but now it is, at best, just another NPC, and at worst, just another obstacle or piece of the scenery to avoid. The next time Eivor whistles for a ride, an entirely different model will heed their call.

But what happens when a horse is treated not as another object or NPC but as a character? Then you get games like Red Dead Redemption 2 and Legend of Zelda: Breath of the Wild. Games in which horses are not just living, breathing characters in these digital worlds, but also your friends.

The ability to name and care for a horse radically changes the way a player interacts with them. In the Assassin’s Creed series, if the player’s mount is killed in a hectic chase, it hardly matters since the player can just hop along the rooftops until they find another and continue the chase as though nothing happened. If the same thing happened in Red Dead Redemption 2, the player would be devastated.

The Power of Names

It’s amazing how big a difference a name can make. The Witcher 3’s Roach may be a buggy and hard-to-handle mess, constantly getting stuck on the scenery at the least opportune moments, but when the credits roll and players walk away from Geralt’s tale for the last time, they will remember her fondly. The bugs and glitches that plagued Roach at launch even became a part of her personality, one that developers CD Project Red really took to heart.

Agro, Wander’s horse in Shadow of the Colossus, in contrast, behaves and controls wonderfully. What sets him apart is the fact that he is the player’s only companion in an empty and desolate world. At times, he is the only other living thing for miles. As the player progresses, taking down the ancient Colossi one by one, they begin to rely on Agro. Without him, how would they cross the vast plains and sun-drenched deserts, or build up enough speed to launch Wander onto the side of raging Colossus? And they start to build a bond. A bond that only helps twist the knife when the bridge collapses and Agro falls to his apparent death, and which adds real emotion to the scene when he returns.

But it’s choosing a horse’s name for yourself that solidifies that bond more than anything else. Similarly, having to break a wild horse before you can claim it as your own serves to further heighten that bond.

Red Dead Redemption 2 and Breath of the Wild do this spectacularly. In both, the player can find wild horses roaming around the expansive open worlds and, if they are fast, silent, or agile enough, they can hop onto a stallion’s back and attempt to break them. The better the horse, the more difficult the breaking-in minigame, but also, the more the player feels they earned the right to call this horse their own.

After successfully breaking-in a wild horse, players of both games can take them back to a nearby stable in order to name them, purchase a saddle, and properly claim that steed as theirs. Both games require you to deepen that initial bond through questing and riding together, but Red Dead goes one step further with the option (or rather, necessity) to care for your horse. Taking the time to really look after this virtual animal–brushing grime from its coat and removing its saddle after returning to camp after a long day’s ride, patting its flanks and praising it when it does well, feeding it and keeping it happy–not only raises the bond meter in the game but also the player’s level of attachment in real life.

Horses in Red Dead Redemption aren’t just abandoned when the objective destination is reached, they are lovingly tied to a hitching post, brushed and patted before the player goes off to trigger the next mission. And when trouble starts, there’s no one else they’d rather have at their side to get them out of it.

But as thrilling as it can be to charge headlong into battle on a horse you tamed yourself, bull’s-eyeing bad guys in a showstopping set piece, it can also really raise the stakes. A stray bullet may hit you, yes, but that’s ok, you can just restart at the checkpoint, but one could also hit your horse. When tragedy befalls a horse you trained and named yourself, it suddenly becomes a lot more than a mesh of polygons and pixels. This way, the death of a horse can have as big or even bigger an impact than the death of a major character (I’ll never forget you, Athena, RIP you magnificent horse).

So, the next time you ride a horse in a video game, take a moment to thank the developers for all the effort and hard work they put in to get it there. Stop thinking about your horse as a mode of transport and start thinking of it as your companion on the long and winding road. And let the spirit of adventure take you to places you never even knew existed.