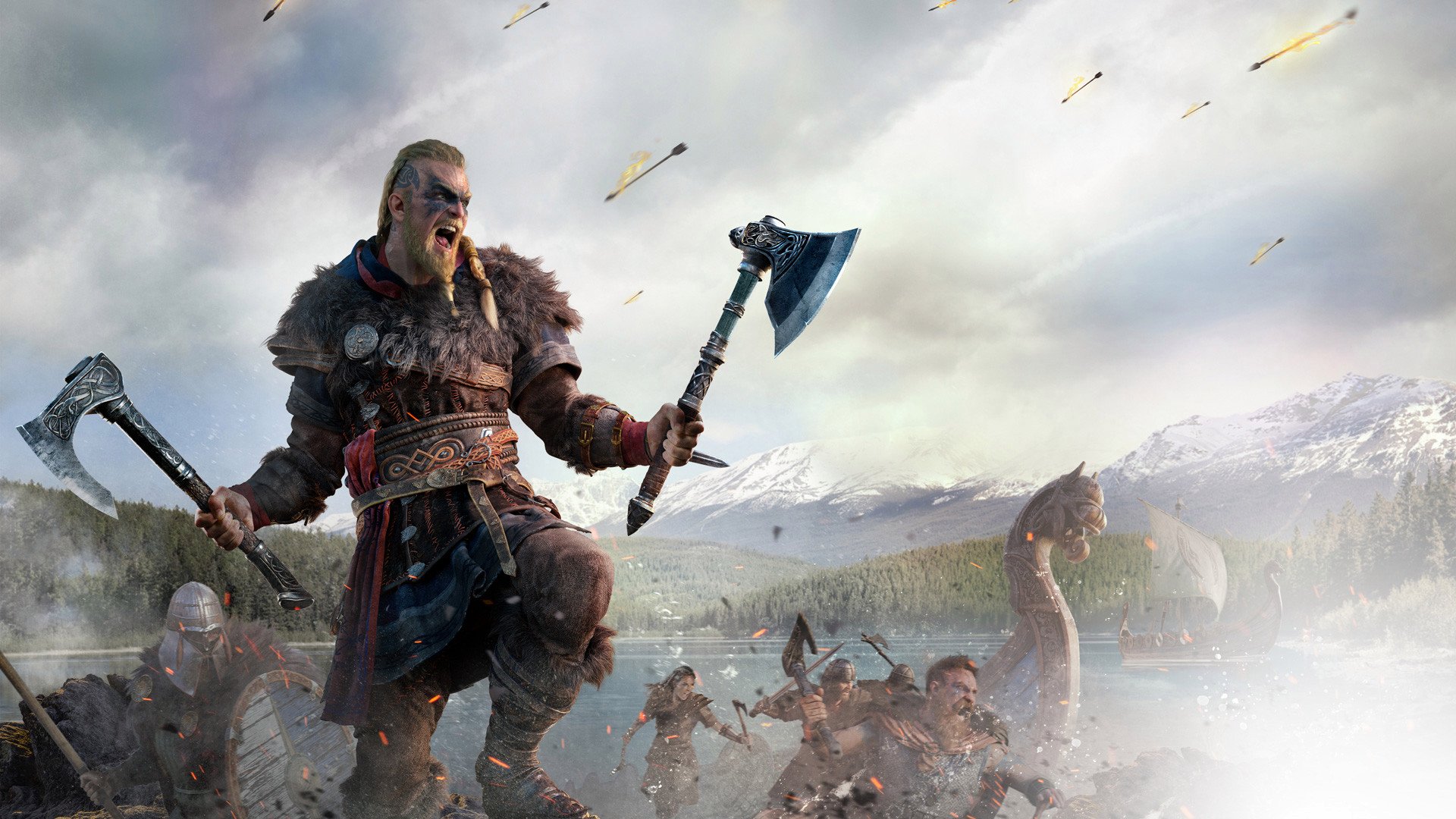 Assassin’s Creed: Valhalla is not as much of an evolutionary leap forward as the previous two games, Origins and Odyssey, represented for Ubisoft’s flagship open-world franchise. However, it is unquestionably a lateral paradigm shift for the series that takes improvements made to the exploration, combat, as well as character advancement mechanics introduced in recent years and refines them just enough to give this latest entry a unique style and substance all of its own.

Developed at Ubisoft Montreal by a team with a strong pedigree of experience with the franchise running all the way back to 2011’s Unity, Assassin’s Creed: Valhalla is something of a thought experiment for one of the first and biggest cross-generational releases at the moment. That’s not to say that it makes any great strides forward of its own, but there are tantalizing glimpses at the future direction of the series that should intrigue any fan of the series.

The main attraction of any new Assassin’s Creed game is its historical setting, and the Viking invasions of Britain is nothing short of irresistible. Norse Sagas have always had a weighty presence in popular culture, and Scandinavian civilization has no less weighty a presence in the formative years of Europe’s history. As such there are fewer moments in history that could prove more fitting for this series to explore. It’s a prominent enough era to immediately capture player’s imaginations, whilst having enough mysteries and inconsistencies for the developers to freely fill in the blanks.

Ubisoft’s rendition of 9th-century Britain feels like a luxuriously dense and lavishly detailed hybrid between Middle Earth and Westeros, with just enough hints of fictionalized history to give it legitimacy. Dark Age England lacks the majestic beauty of Ancient Egypt as seen in Origins or the storied grandeur of Classical Greece as portrayed in Odyssey. Yet it more than makes up for it with a humble splendor that is perfectly evocative of a war-torn nation striving for stability. It would be reasonable to assume that a country as limited in geographical scope as Britain may make for a more restrictive setting for an action-adventure RPG. However, by blending pockets of human habitation with swathes of rolling hills, mountainous crags, and intricate networks of waterways, Assassin’s Creed: Valhalla takes place in a vibrant and expansive world.

Cresting a hill and looking down at the verdant expanse of countryside stretched out before you, it would be easy to be intimidated by how surprisingly extensive the game world is. It’s absolutely teeming with the nascent foundations of settlements that eventually go on to be some of Britain’s most noteworthy towns and cities. That’s where social encounters and potential quests abound, which might see players engaging in scathing Scandanavian rap battles, chugging horns of mead, or helping the local citizenry overcome their woes.

Beyond the boundaries of civilization, however, the landscape is dominated by the collapsed ruins of Roman occupation and the austere walls of monasteries and castles that rise from the earth, all of which are ripe with opportunities for exploration and looting. There’ no shortage of things to see and do on the map, and given the concentrated nature of the locale, it’s an impressive feat of game design that makes this title overcome the sense of needless padding that so often taints the play experience of many open-world games.

That being said, the Anvil engine is definitely beginning to show its age and although it does its job more than admirably, Assassin’s Creed: Valhalla’s world can feel a little clunky when compared to the effortless grace of games like Ghost of Tsushima. Regardless, Ubisoft has struck an impressive balance between performance and graphical fidelity that results in some truly exquisite scenes. Whether I found myself bounding between the crumbling towers of fortified castles as the sun sets through a torrential downpour; skulking through marshland with only the dim glow of distant torches to light the way through banks of creeping fog, or galloping through acres of lush pastures I never failed to take a moment just to appreciate the level of artistry on display.

Ubisoft excels at improvement by iteration. From Origins to Odyssey to Valhalla the current format of the series has been tinkered with to refine the mechanics that work and replace those that didn’t. One of the systems that I missed the most was the large scale naval battles. These became something of a sleeper hit feature of the series after their initially unexpected inclusion, and their absence is definitely felt. It’s a shame to see that aspect absent in Valhalla but it’s an omission that makes sense.

When it comes to the longship that players possess, the emphasis is placed less on it as an instrument of war and more on it as a tool for exploration and travel. This ties in with the design intention of wanting to shed light on the more socializing and civilizing elements of the culture rather than adhering to the stereotype of the Vikings as bloodthirsty barbarians.

Social stealth was a system that fell into irrelevancy as the series shifted to a more action-orientated, combat-motivated format in Origins. Throughout the game, players will find that taking the direct approach is not always possible or desirable, as such there are numerous ways for players to evade detection. Some objects can be used to become part of the scenery or appear like an NPC, whilst groups of monks and town drunks can be used to sneak past or distract inconvenient guards. Putting this gameplay element back into Assassin’s Creed: Valhalla, Ubisoft has given players a suite of options as to how they approach navigating and fighting through some of the most well-designed and feature-rich environments the series has ever presented.

Underpinning narrative themes of community and belonging are emphasized even further by the return of the settlement. Being able to upgrade and develop a specific location that players could claim as their very own, did a lot to foster a sense of investment in the game world. Ravensthorpe fills this role in Assassin’s Creed: Valhalla and being able to expand it over the course of the game, gives players another way to customize their experience. It’s also a focal point for some of the component parts of the game as certain options and quality of life features are only accessible through the construction of certain buildings. Different players will have significantly different experiences with the game depending on the order in which they decide to upgrade the settlement.

The skill, ability, and equipment systems in Assassin’s Creed: Valhalla all continue this trend of offering players a range of options that cater to their preferred playstyle. Divided into traits classified as being associated with the wolf, bear, and the raven the skill tree allows players to upgrade their character whether their preference is for direct brutal combat, striking from stealth with precision blows, or a combination of the two. The system works by granting you skill points whenever players reach certain experience thresholds which can then be spent on unlocking passive upgrades and active skills on a branching skill tree.

This can feel a little underwhelming at times, as minor incremental changes to statistical values are never really exciting. However, working towards a particular skill or locating the knowledge required to unlock or upgrade an ability does have a certain organic quality that mimics the process of learning and uncovering new secrets that is a crucial theme in so much of the story I’ve experienced so far.

Obtaining weapons and armor has also been toned down. Whereas Odyssey showered players with new loot at any given opportunity, Assassin’s Creed: Valhalla elects to offer up such treasures sparingly. Each piece of equipment is unique and comes complete with its own particular ability or skill augmentation, which makes finding the last piece of a set or a certain type of weapon all the more impactful and meaningful. This system doesn’t offer the same continual satisfaction as obtaining a new item every few minutes. However, it does create the impression of the gradual acquisition of combat prowess and eliminates the need for tedious inventory management. This frees up time for players to focus on far more engaging parts of the game.

I haven’t experienced any of the fatigue and frustration that various content creators and reviewers have warned about in their post-release commentary. Granted, Assassin’s Creed: Valhalla doesn’t have the same shocking freshness as Origins or the bombastic panache of Odyssey. What it does have is a quiet, confident mastery of itself that is not usually on display in the vast majority of AAA games. From a soundtrack that merges hints of Blade Runner and Ghost in the Shell that runs in sober counterpoint to a poignant narrative; to its deeply detailed and richly evocative environmental design; all the way to its robust and streamlined combat and progression systems Assassin’s Creed: Valhalla expertly plays to its strengths whilst minimizing its flaws. It’s a worthy addition to the franchise and one that I personally will be singing the praises of for ages to come.