Assassin’s Creed: Odyssey does its best to truly live up to the word “epic.” The 2017 release of Origins was a landmark moment for the franchise, completely changing the Assassin’s Creed formula that had sustained the series through its first decade. Level ranges, randomized equipment, robust skill trees, and action-oriented combat made Origins a critical and commercial success. Odyssey retains these improvements, but with a few quality of life tweaks, this might just be the best Ubisoft open-world game ever made. 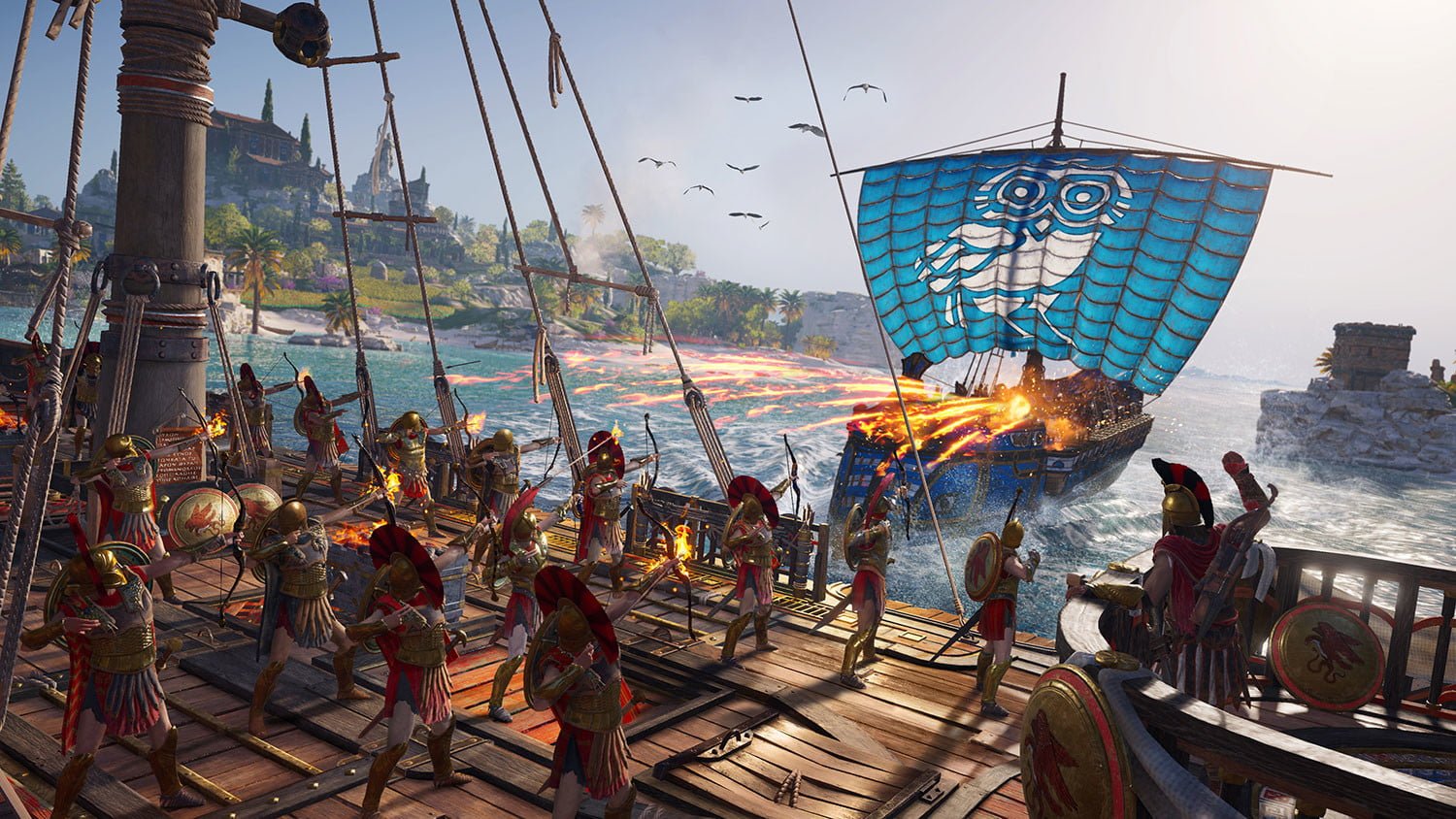 Set during the Peloponnesian War, Odyssey tells a twisted tale of redemption that spans much of the ancient Greek world. The story is rife with political intrigue, occult mysticism, philosophical musings, gory deaths, humorous asides, and heroic deeds. The developers have crafted a narrative that masterfully evokes the bathos and pathos of classical literature.

Players take on the role of either Alexios or Kassandra, exiled Spartan siblings turned misthios (mercenaries). Their adventure takes them from one side of the Greek islands to the other, encountering friends, foes, and historical figures along the way.

Players ascend from humble mercenary to hero, as they fight to reclaim their lost home and help bring order to a war-torn nation. Their main foe is the Cult of Kosmos, a clandestine cabal of misguided citizens who aim to subjugate society through ancient technology, conspiracy, and murder. Thwarting the Cult becomes the protagonists’ main motivation as they track its members down and eliminate them one by one. 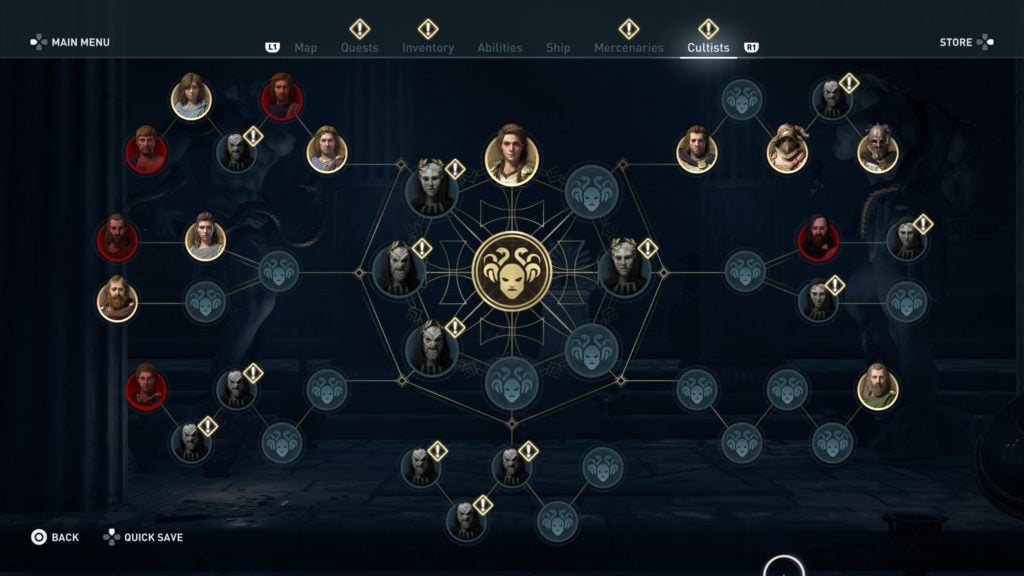 As in Origins, the modern conflict between the Assassins and Templars takes a back seat. This is a smart move on Ubisoft’s part, as that whole narrative thread had become rather stale and prescriptive. Odyssey keeps the story focused by only bringing players out of the Animus at key points rather than jolting them back to the modern world at regular intervals. Using Layla Hassan’s story as a contextual framework for the historical narrative means that unlike Desmond Miles in earlier titles, she never outstays her welcome.

Odyssey‘s story doesn’t do anything particularly new or unique, but at no point does it ever become boring. In a series that has been running continuously for over ten years, that’s a fairly remarkable achievement.

An Odyssey Into Classical Greece

The most captivating aspect of a new Assassin’s Creed game has always been the opportunity to explore a new historical setting. The sprawling desert wastes and lush riverside farmlands of Egypt marked an expansive detour from the relatively restrained open worlds of previous entries, but Odyssey takes you even further off the beaten path in one of the most well-realized and intriguing game worlds of this generation. 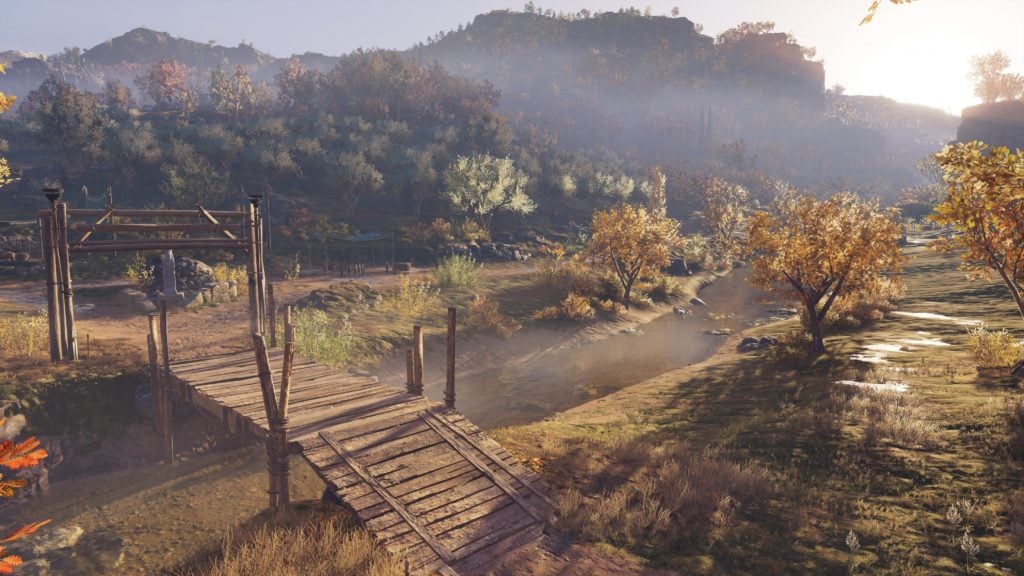 Awe-inspiring sights and vistas await the player at every turn. Walkthrough rustic olive groves and modest villages. Traverse towering mountains, verdant plains, and treacherous oceans. Explore the grand streets and alleys of cities like Athens and Olympia. The craftsmanship behind this recreation of the ancient Greek world is nothing short of impressive. The austere majesty of white marble tends to characterize the Classical Greek era, but Odyssey‘s environments burst with lavishly generous colors. Whether you’re galloping down a hillside towards the glittering torches of a coastal city, stalking a target against a radiant magenta sunrise, or plumbing the depths of a mysterious tomb, the game is never anything other than astoundingly gorgeous.

Carve Your Own Path of Adventure

Odyssey also fills its vibrant world with plenty to see and do. Divided into level-graded provinces, the map features locations and activities that promise countless combat and exploration opportunities. They cover a wide array of scenarios, from naval battles to towering landmarks to encounters with mythological creatures. In fact, the sheer amount of activities can prove quite daunting; Odyssey doesn’t fully escape the open-world trap of content padding or bloated maps. That being said, the game’s size does lend itself well to replayability and completionists.

However, Odyssey maintains that philosophy of freedom where it counts: playstyle. The skill trees cater to ranged, melee, and stealth combat, with players mixing abilities and skills as they see fit. Having the ability to reset these skills at any moment encourages you to experiment until you have a character build that can handle any situation the game throws at you. 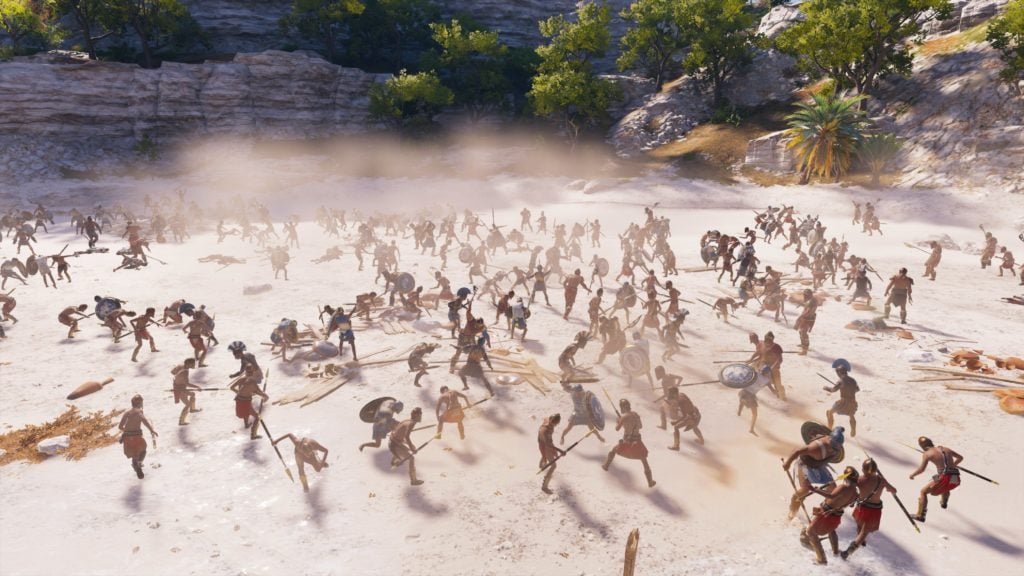 Weapons range from standard swords and daggers all the way up to axes and spears, each of which has its own unique strengths. It’s always wise to have an assortment of death-dealing instruments on hand to effectively match against your opponents. Whether you prefer sneaking around and launching surprise attacks, or taking a more direct approach with all-out assaults, Odyssey never punishes you for playing the game your way.

For everything that Odyssey has going for it, it’s not without its flaws. The major gripe players might find lie in how aggressively the game touts micro-transactions. The in-game store boasts equipment and other items, — some cosmetic, others not — that make loot obtainable via gameplay rather tame and uninteresting. While gameplay armor and weapons respect historical design accuracy, they’re obtained in such a mish-mash of styles that putting together a coherent look for Alexios or Kassandra might as well be a mini-game in its own right. The store seems to exist for players who want armor that makes them look like more than just a regular foot soldier. 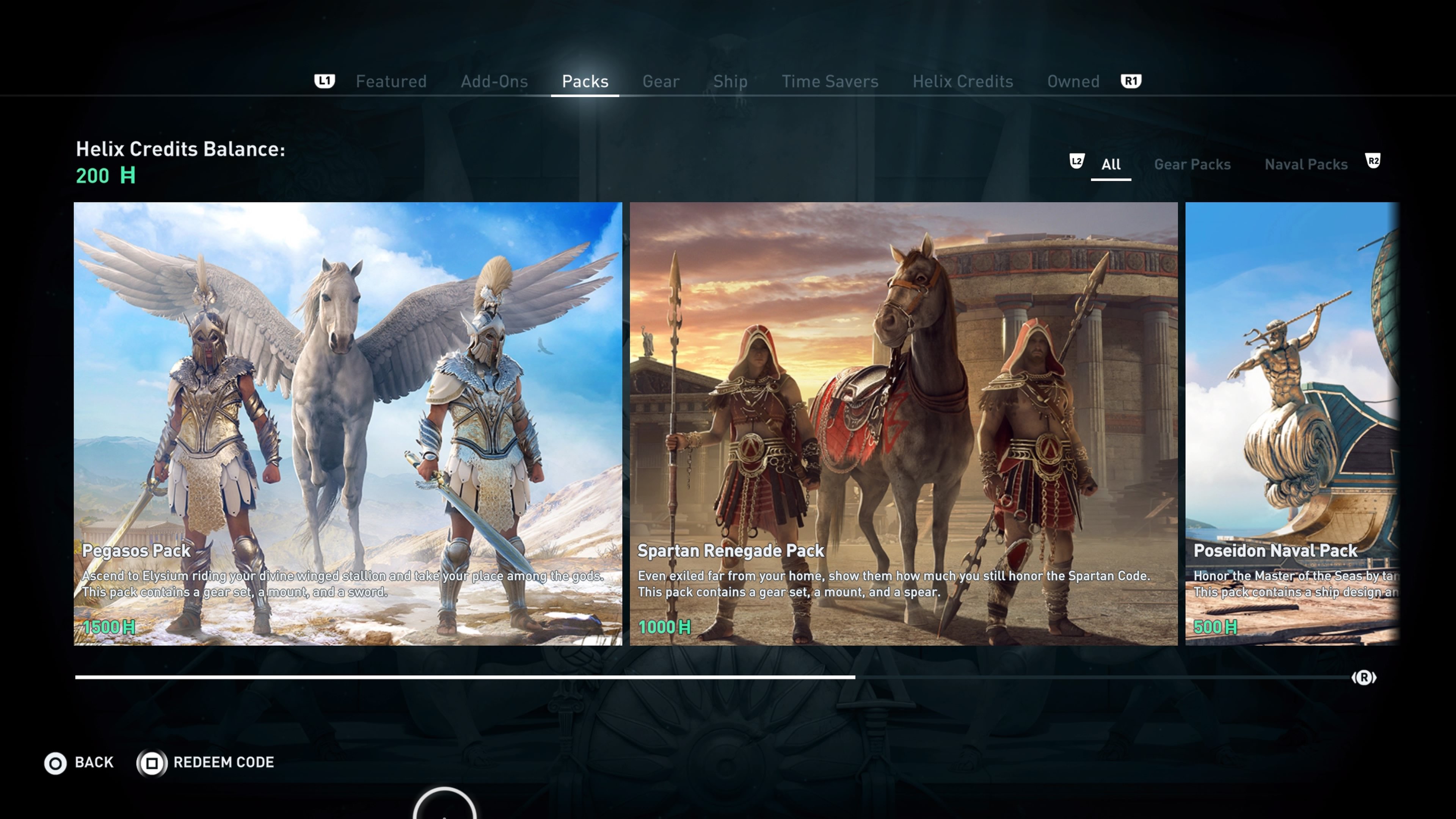 More importantly, booster packs and time savers raise serious concerns about the future of this series. By selling experience boosts for real money, Ubisoft treads dangerously close to free-to-play territory. In a full retail price AAA game, that constitutes little more than a cash grab. Players can ignore them easily enough, but the fact they even exist indicates that the game was built with these purchased extras in mind.

On the technical side, there are moments of enormous frame drops, prolonged pauses as the game freezes to load up a new area, some character glitches, and texture pop-in. These issues either indicate that Ubisoft has pushed the upper limits of what current generation hardware is capable of running, or there are some significant optimization problems that have yet to be worked out.

Assassin’s Creed: Odyssey is by no means as much of a bold statement as Origins was when it launched last year; it’s clear that Ubisoft have found a new formula and they’re going to stick with it until its player base starts to drop off again as it did with Unity and Syndicate. But it’s a formula that works. Origins attempted to redefine the series and take it in new directions, but Odyssey represents Ubisoft finding their feet with the new format and making it a model that can sustain the series for years to come.