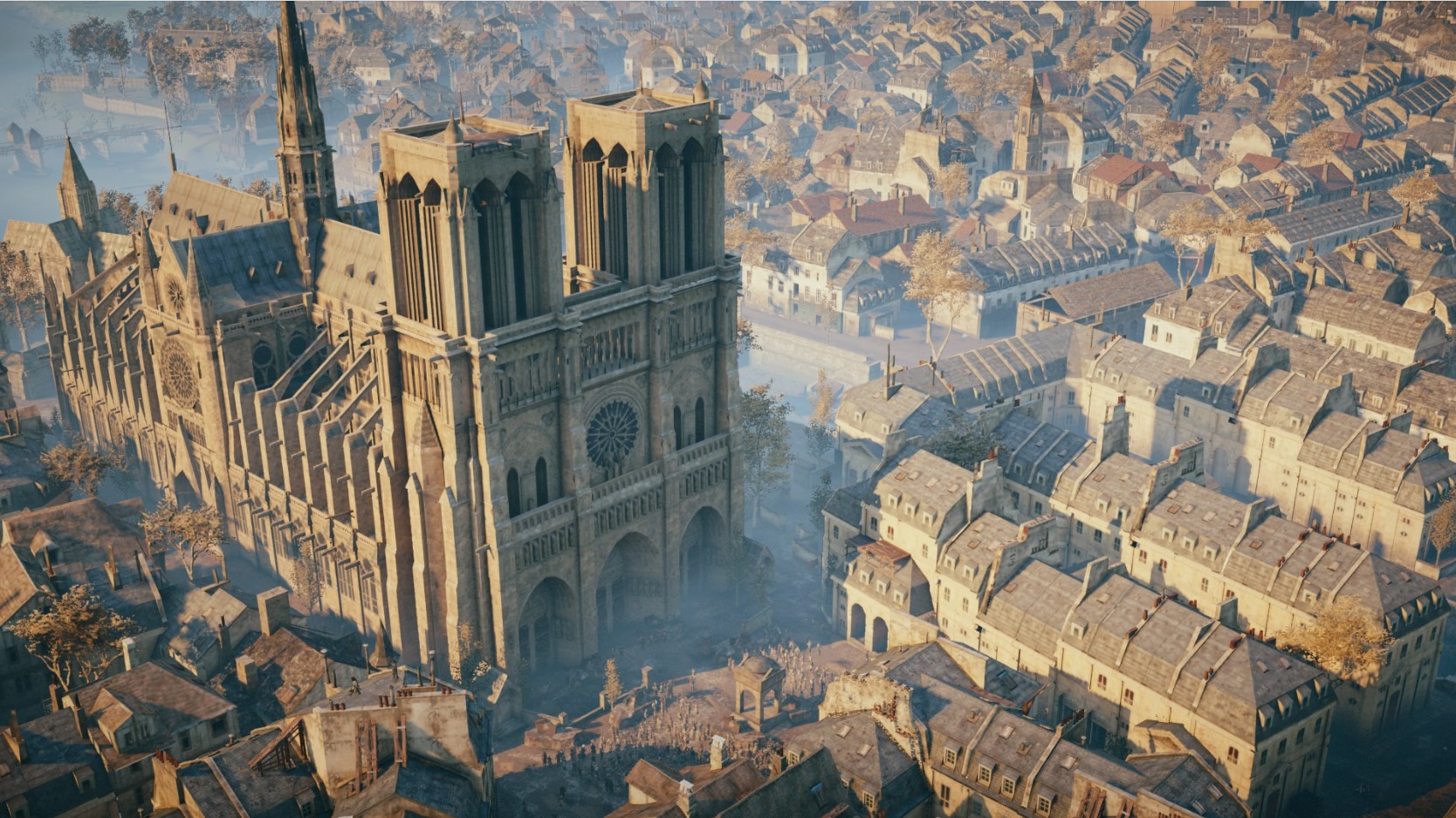 Cities in video games are often described as being “their own characters” by their bright-eyed and enthusiastic developers. This makes sense when the city in question was made specifically for the game – cities like Cyberpunk 2077’s Night City or Batman Arkham Knight’s Gotham, which were lovingly crafted from the ground up to meet their games’ needs – but can it also be said of a city that already exists in the real world?

Video game cities are built with the player in mind, first and foremost. The other NPCs, vehicles, billboards, and buildings are all afterthoughts, added to give texture and a sense of realism only after the basic needs of the player have been met. Take Arkham Knight’s Gotham City for example – developers knew the players needed two things to get the most out of Gotham: tall buildings to leap and glide from, and wide streets to drift through in the Batmobile. If the buildings had been spaced too close together, it would have taken the fun, the speed, and the thrill out of movement, and players would have been less inclined to explore.

Compare that to the way real-world cities are designed, and the problems become immediately apparent. Real-world cities are designed for the masses, not the individual. Buildings are squeezed together and stacked tall to save space. Roads are either far too narrow – having remained almost unchanged from the dirt roads they once were when the city was young – or have mutated into ever-expanding tangles of highways and overpasses, seven lanes wide. Real cities are built for logistics and businesses, not for the superhuman Chosen One. And, as a result, they can sometimes come across as a little sterile compared to their digital cousins.

The Infamous franchise demonstrates this point well. The first two games take place in fictional cities – Empire City and New Marais – while Second Son takes place in Seattle. Empire City and New Marais may be based on real places (New York and New Orleans respectively), which gave the artists a source of inspiration, but the bones of the cities are entirely the developers’ own creations. This allows them to be tailored made to make the most out of main protagonist Cole McGrath’s ever-expanding arsenal of powers – with environmental hazards to take advantage of in battle and powerlines to zip around the city in style on – but also opens up room for creativity and character.

These cities are dark and brooding, yet pop with neon color and subtle (or not so subtle) environmental storytelling. They feel as though they have been lifted straight from the pages of a comic book. And, compared to such careful combinations of gameplay and art direction, Second Son’s Seattle, although stunningly recreated and beautiful at times, feels a little dull and drab. Especially with its near-constant grey skies and rain. The first two games’ cities might not be as realistic, but they end up feeling more real, more true to the fantastical world they’re set in.

A Little Artistic License Can go a Long Way

So, with all that being said, why are real-world cities used as the setting for so many great games? And what makes some better than others? While fictional cities may be more conducive to gameplay, the right developers and a healthy amount of artistic license can turn any real-world location into the perfect digital playground.

Real-world cities are primarily chosen for either aesthetic reasons or story reasons, and sometimes both. A rarer reason, though not uncommon, is simply because the developers live there, and want to show off their hometown. Take The Medium as a recent example of this – the game is set in Krakow, where developer Bloober Team is based, and the nearby Hotel Cracovia serves as the direct inspiration for the in-game Niwa Hotel.

The Assassin’s Creed series is well-known for its globetrotting, time-jumping adventures. And with each game set in a new time period and a new part of the world, how does Ubisoft choose which city, or cities, to set their next title in? Story obviously informs the decision-making process early on – choosing the country and the year around important historical figures and events, like the French Revolution or the signing of the Declaration of Independence. But then aesthetics come into play. Gamers don’t play Assassin’s Creed solely to experience a dramatized take on history, but to explore the most beautiful and captivating cities from across the globe. And, as many of the most important historical events included people of power and influence, they tended to take place in the most powerful and influential cities – cities that show off their significance and wealth in every aspect of their architecture, from the grandest of cathedrals to the simplest of street corners. A happy fact of history that allows Ubisoft to get the best of both worlds.

And these cities are lovingly recreated, with the developers and designers tirelessly poring over old maps and documents, as well as taking countless reference photos, to ensure players get to explore the real deal. From the gorgeous red-tiled rooftops of Florence and the wonderous waterways of Venice, to Notre Dame, the House of Parliament, and even the Great Pyramids of Giza – all have been made with such care and precision that they are almost identical to their real-life counterparts. In fact, Ubisoft does such a good job with their recreations that I was able to find my way around sections of Florence through my memories of exploring the city in Assassin’s Creed 2 alone. I was amazed to see just how accurate it was.

The landmarks, murals, monuments, and buildings of these cities are what make them special, bringing out a sense of awe and wonder in players, or feelings of nostalgia for holidays and places visited long ago. And so it is these that get the most attention. But concessions need to be made for the rest of the city as a whole. There’s not enough time in the world to replicate the roads and backstreets exactly, not enough resources in any studio. And there’s no point, as only those who actually live in the city would be able to tell the difference. The average tourist wouldn’t know any better.

And, of course, there’s always the matter of gameplay. Cities aren’t built for individuals. Even with its stunning recreations, the Assassin’s Creed games had to alter their cities slightly. Roads were made narrower, houses squashed closer together, ramps and ropes, and rickety ladders were added to provide ease of movement. The developers took real cities, then molded them into perfect parkour playgrounds that suited the gameplay and narrative.

Assassin’s Creed is a good example of a developer picking a city for both aesthetic and story reasons, but some are picked solely for one or the other. Amsterdam is the backdrop to a stealthy mission in the new Modern Warfare 2, but it was chosen purely because of how lovely it looks. The mission could have taken place anywhere else in the world, and it still would have made thematic sense. That being said, Infinity Ward did a fantastic job of making Amsterdam look stunning.

The original Watch Dogs is on the other end of the spectrum. It is set in Chicago purely for story purposes. Watch Dogs is a game all about surveillance, lack of personal freedom, and government control gone too far, and at the time, Chicago was the most surveilled city in the Western world. It made for the perfect backdrop for such a story, but maybe lacked a little personality.

It is always fun to compare how different games handle the same city. Different developers can use the same backdrop for entirely different reasons, and it can completely change the feel of the place.

For example, New York City is one of the most prevalent cities in gaming. It has cropped up time and time again, yet always feels just a little bit different each time, like an actor who’s done their research for a new role. In Marvel’s Spider-Man, it’s bright and colorful, it still has its seedy underbelly, but mostly it reflects its hero’s positive outlook on life. In Max Payne, it’s a dark and twisted gutter of a city, a grim and desperate place, for grim and desperate people. And in The Division, it’s a desolate wasteland, a monument to what humanity once held dear, their materialism, their greed, their hubris. No matter how many times we see that skyline, it never gets old.

But cities change over time, and it can be a real joy to experience that change, to see how just a few decades, or a few centuries, can make them almost unrecognizable. Compare Assassin’s Creed 3’s New York, a mishmash town of squat wooden houses, to the concrete monster it is today. Or go even further afield, and look to the future.

The Last of Us and Fallout 4 are both set in Boston, but not the Boston we know. For The Last of Us, it’s only a couple of decades into the future, but a fungal apocalypse has wiped out most of humanity and allowed nature to reclaim the world. Roads have collapsed, vines have strangled and crushed once proud landmarks, and many sections are completely underwater. But the feel of the city, its history, remains.

The Boston of Fallout 4 has fared far worse. After a nuclear apocalypse, very little of it is left standing, and what remains is almost unrecognizable. So little remains, in fact, that it can be easy to forget where you are, until you turn a corner and see the Bunker Hill Memorial on the horizon, or find yourself looking up at the remains of the Old State House, and the feeling that this was once a real place, where real people lived and worked, suddenly hits you.

The Allure of the Real

This is why developers choose to use real-world cities in their games. These places have hundreds upon hundreds of years of history to draw upon, and beautiful, unique architecture and landmarks that cannot be found anywhere else in the world. They have an allure that only comes from time, from being present in the social consciousness for far longer than any of us have been alive, and it lends them a particular feeling, a certain sense of presence that cannot be imitated. This feeling may make a visitor instantly fall in love, never wanting to leave, ceaselessly in awe of what they find there. Or it may repulse them, coming off as just another dirty, polluted city among thousands. Or it could be anywhere in between.

Cities are places of power. They hold sway over the minds and imaginations of millions. And try as they might, fictional cities just can’t have the same effect. They may look the part, they may even inspire the right feelings (if designed well), but they will always lack the layers, the history, the magic of the real.