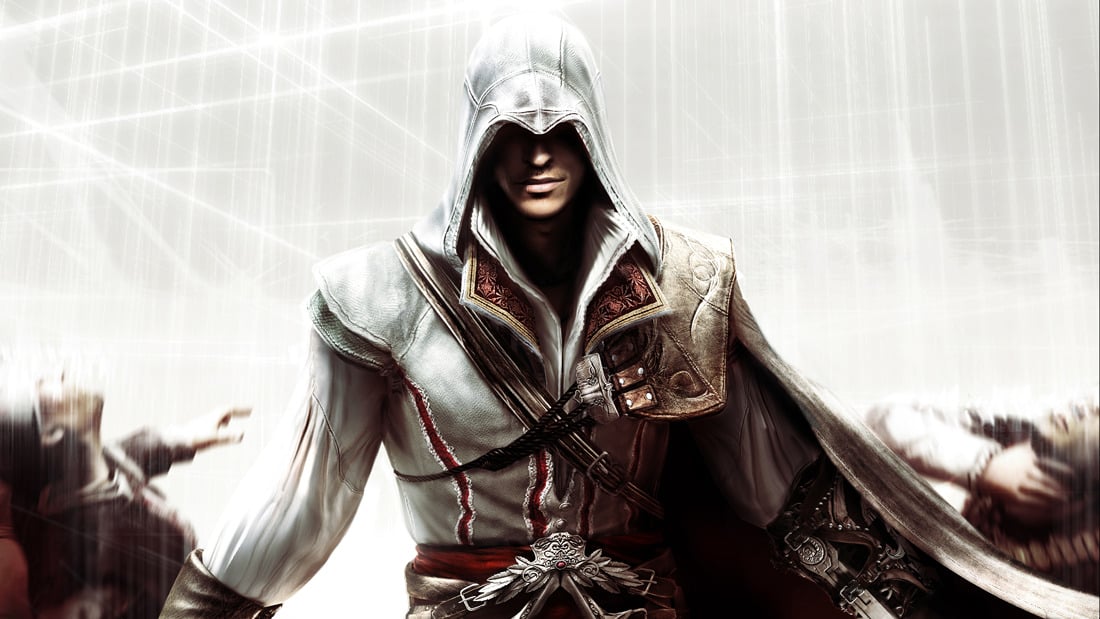 Dual daggers. Need I say more? Yes, actually, I do, otherwise, this would be the lamest article ever. I want to be Mrs. Ezio Auditore because Ezio is by far the sexiest of all of Desmond’s ancestors – and it’s not just that smoldering charm and accent. Ezio has three games to his name, and so far, his is the only story to be ported to PS4. Why? Because he’s kick-ass, bad-ass, and has a sexy ass – just ask Cristina or Sofia. Lucky cows.

*NOTE* There be spoilers ahead (channeling my inner Edward).

So why is it that Ezio has garnered this much adoration and praise – so much so that Ubisoft was willing to invest in multiple games and a short film? Because we as players got to know Ezio more intimately than any other Assassin’s Creed protagonist. Altair was boring – we knew nothing about him except he was an assassin. Connor… What is there to say about Connor? Nothing.

Let’s move on. Edward, I’ll admit, really piqued my interest, but he was far too self-absorbed throughout the game to be likable by the end of it. In fact, I’d have loved to play Mary: a female protagonist forced to be a man in a cutthroat world. Now that would make Abstergo money. I also didn’t know how to feel about the whole ‘Abstergo movie production company’ thing – I didn’t even know who I was playing in the present!

But it was a pretty clever idea, and the introductory splash screens of the game that include Abstergo give it a very meta feel; I felt guilty throughout because my conspiracy sensor was off-the-charts with thoughts that I may actually be an accomplice to the Templar’s evil plan for world domination. You see why I only game during the holidays? Moving on, Arno was a bit of a pansy, and (don’t judge me) I haven’t had a chance to play Syndicate – my PS4 being stolen and all.

Anyway, back to Ezio. Sure he’s an arrogant little mutt in the beginning, but watching him grow – even better, growing with him – made the player feel like they were really part of the game. Ezio’s character elicits sympathy – who didn’t feel a pang of sorrow when his family was hanged? Who didn’t truly hate the Borgias on Ezio’s behalf? If you didn’t, seek counseling as you may be a sociopath.

Aside from Ezio himself, the framing of his story and the use of some of the most famous people in history really made the plot extremely engaging. Seriously, how ingenious is it to cast Leonardo da Vinci himself as Ezio’s gadget man? And given the well-documented vices of the Borgias, I could completely buy Rodrigo as a megalomaniac.

Moving to the present, the mysterious Subject 16 was finally revealed to us in Revelations (the title of the game only made sense to me just now), and the entire 2012 apocalypse thing made all the pieces click into place. But my two favourite parts of the Ezio chapter were Minerva’s message to Desmond through Ezio (my goosebumps had goosebumps), and the video clip of Adam and Eve running away with the Apple of Eden. Despite the occasional screech of “blasphemy!”, that was pretty epic.

Obviously, the leaps of faith, the characters, and the parkour are what keep people coming back to the series, but the essential selling point of Assassin’s Creed is the continuous story weaving itself through all of the games. The end of Black Flag was a bit of a shocker – I always knew computers were the gods of gaming, but I never saw the Juno-entity thing coming. Another shocker of the Ezio chapter was in Brotherhood when that thing happened to that girl character that I don’t want to name for fear of ruining it for potential players. Suffice to say I was like:

But I guess this is the type of game where you never know who to trust. I trusted the developers to keep the main protagonist alive until the end. RIP Desmond.

So, to sum up, Ezio really engaged the player to the point that we felt his joy and pain (or maybe that’s just me being obsessive), and the biggest revelations of the game were introduced. The First Civilization was explored, and I have to say, even though it’s a fictional game, it makes sense. The idea of a pre-pre-historic civilization is reminiscent of Atlantis or even alien conspiracy theories. If the Isu were a superhuman race that was made extinct by a 2012-like catastrophe (again, RIP and thank you Desmond), so many things we can’t explain would make sense! If the Isu were what the first humans knew as ‘gods’, then hieroglyphics from all ancient nations would read like People Magazine.

I’m not a conspiracy theorist, I’m just a huge admirer of the way that Ubisoft took the things we can’t explain, and found a logical way to explain them, even if it is totally fictional. Then again, maybe the Templars are just screwing with all of us. The truth is out there… But I doubt this game has anything to do with it.