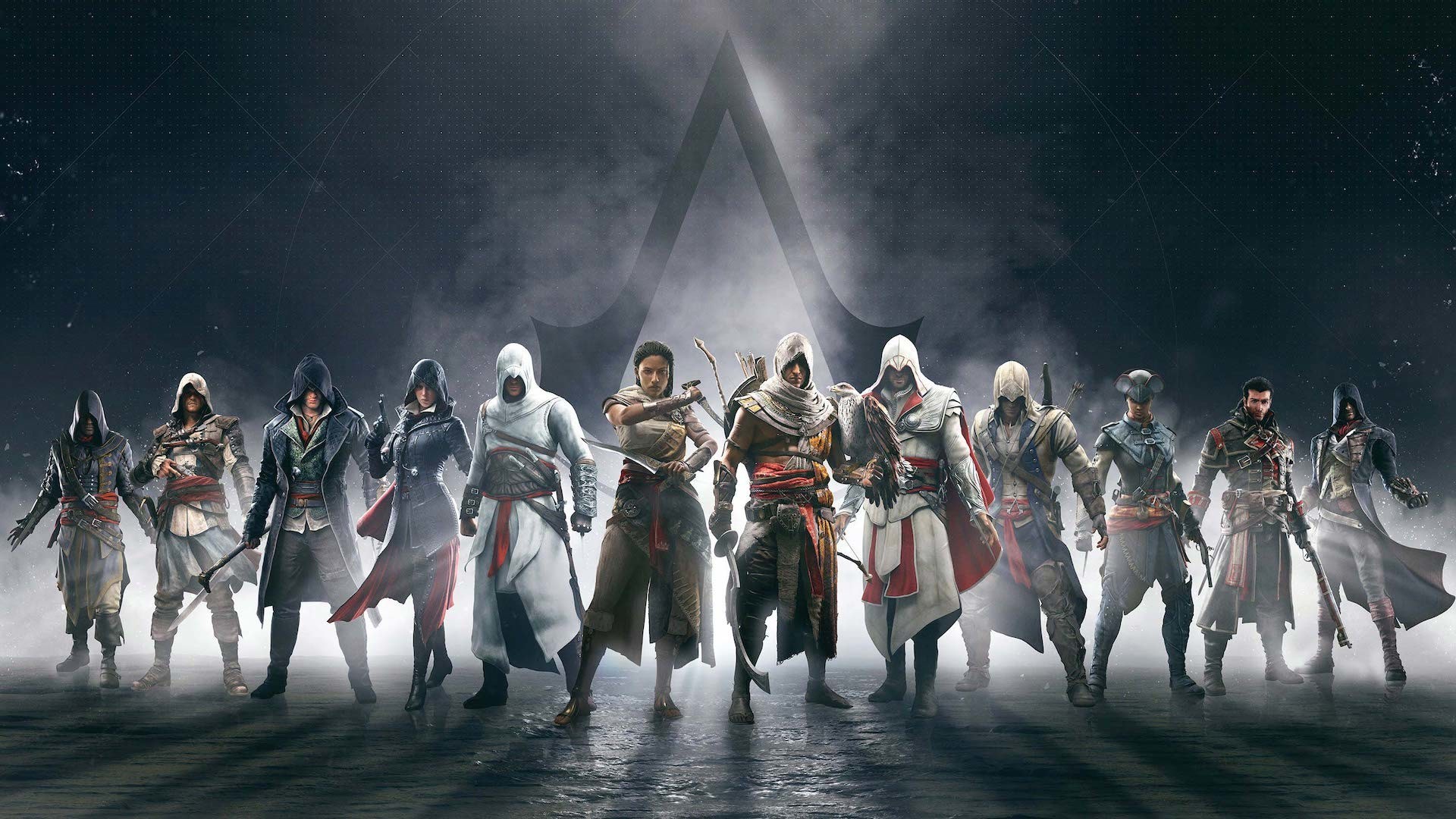 Character, and the cost of player choice.

Modern Assassin’s Creed games have an identity crisis. In going from sneaky social-stealth playgrounds to open, loot-and-grind RPGs, the series has forgotten what made it special, and what made it stand out from the crowd, all in the misguided rush to be just like everything else on the market.

At the very core of this problem is the simple fact that these new games, especially Odyssey and Valhalla, have traded away the carefully crafted characters for the illusion of player choice.

Don’t Forget Your Past

By the time Assassin’s Creed Syndicate released, the games had stuck to the same, relatively unchanging formula for almost a decade – a formula that had, according to many fans and critics, grown rather stale. With the dawn of Assassin’s Creed Origins, then, came great change: the direction, tone, and even fundamentals such as gameplay and progression were completely turned on their head. At first, this appeared to be the perfect solution to shake up a series that, many would argue, had outstayed its welcome long before then. Change was overdue, and Origins felt like a breath of fresh air upon its arrival.

While a massive departure from what came before, Origins’ gameplay tweaks felt novel. Expanding the world and climbable surfaces gave players more freedom than ever, as did making assassinations and target missions more open-ended. Updating the controls made controlling Bayek smooth and responsive, and the much-needed combat overhaul added a new sense of challenge. But these changes felt grounded, an evolution in keeping with series tradition, because they were all tied to the game’s central character.

Yes, the game no longer had the stealthy hide-in-the-bushes-for-the-perfect-time-to-strike gameplay of the originals, but Bayek was unlike any of the characters players had controlled before. He wasn’t a nobleman, or a hunter, or a life-long Assassin; he hadn’t been trained in the tenets of the Creed, and taught to strike from the shadows and blend with the crowds – the Creed didn’t even exist yet. He was a Medjay, a warrior, trained to protect his country and his people. And the gameplay reflected that. But more importantly, so did the writing.

Despite going down a more RPG-style route, Origins didn’t add the dialogue options and story choices that would come to bite its sequels back in the future. Because of this, Bayek is his own character, with his own morals and motives that may not line up perfectly with the players controlling him. Bayek is a man taught to seek justice in the world, and when his son is killed, he lashes out against it, alienating himself from those he once held dear. He is a broken man at the start of the game, one seeking revenge rather than justice, but over the course of his great journey, he comes to terms with his son’s death, regains his sense of justice and humanity, and grows as a person.

This is only possible through a combination of good writing and a lack of player input. Think about Joel’s fateful choice at the end of The Last of Us Part 1. Joel does what he does because it’s in keeping with his character to do so. If the player was granted a choice at the end of the game, it would have severely undercut the impact Joel’s actions had on the player. This is because Joel is written as a real person, not a blank slate for the player to fill in with their own personality. He has his own thoughts, feelings, and motivations, and they may be very different from the players. But this is what makes him and his decisions so impactful. It is what made the protagonists of the previous Assassin’s Creed games so memorable and loved. And it is what is missing from Ubisoft’s latest offerings.

Moving onto Odyssey, Ubisoft left all sense of realism and good storytelling behind. The game put gameplay and player choice (and microtransactions) front and centre, and let everything else fall to the wayside. Kassandra/Alexios, whichever main character the player chose (don’t worry, I’ll come to that shortly), can run faster, climb higher, hit harder, and take more punishment than any other protagonist in the series. They can even turn invisible, turn their enemies to dust, and survive falls from any height, should the player invest in the right skills. The game even went down the silly route in terms of its story, removing the drama and serious stakes of previous games and replacing them with light-hearted escapades and jokes. All in all, it took the historical realism out of Assassin’s Creed and turned it into a comic book farce.

Valhalla tried to fix things by creating a more realistic world and a cast of characters and taking protagonist Eivor on a more serious and dramatic story arc, but it only went partway in getting the series back on track. The game was still too bloated to tell a meaningful story, the narrative stretched too thin over 100 hours of repetitive gameplay. Had the game aimed instead for the 20-30 hour mark, its story might have been something to remember. As it is, however, it’s entirely forgettable.

The first problems arise right at the very start of these two games, with the player asked to choose who they would like to play as. What may at first seem like an innocuous choice immediately tells the world that Ubisoft cares less about story than they do about chasing the latest trends (and, unfortunately, giving the mainline series a true female lead). This option exists solely to push the idea that these games care about choice, and that the player’s choices matter. But, of course, they don’t, as either character/gender plays exactly the same way.

It also throws the series’ promise of semi-realistic historical fun out of the window. As established in the games’ lore, the Animus creates digital replicas of a person’s memories from their DNA (via the scientifically disproved theory of genetic memory). That means the settings, characters, conversations, everything, all exist perfectly as memories in the subject’s DNA. And if the Animus is able to perfectly recreate the protagonist’s home, right down to where they placed individual pots and crockery, how does it not know which gender the protagonist is? Or, in Odyssey’s case, who the protagonist is?

The old games made their protagonists a part of history, someone who was there at every major historical milestone, who influenced key decisions, but due to their Order and secrecy, were always left out of the history books. It was easy to suspend your disbelief and pretend this was what really happened. Odyssey and Valhalla’s choice of playable character immediately takes the player out of the moment and reminds them that it’s all just a silly game.

Instead of being their own person, characters become blank slates who don’t really stand for anything, lest the player disagree with their actions. Because of this, the latest main protagonists are one-dimensional at best, with only a scant handful of ideals and traits to set them apart from each other. But they are also inconsistent. Player choice means Eivor can act noble and heroic during cutscenes but slaughter everyone in their path during gameplay, guilty or not. Or that Kassandra can swing from saving children one minute to murdering entire villages the next without even batting an eyelid.

In Valhalla, giving players the option to sleep with their brother’s wife while his missing, presumed dead, does nothing for Eivor as a character. Especially as it’s glossed over without any consequence later in the game. Odyssey is also guilty of this, with all of its choices leading only to minor consequences or changes in story. But worst of all, it allows players to choose Kassandra/Alexios’sexuality in the main game and then forces them into being straight in the Legacy of the First Blade DLC. A move that caused so much backlash that Ubisoft quickly had to patch it out. You can’t give players choice only for those choices not to matter. And even worse, you can’t then take those choices away to fit a predetermined narrative.

The problem is giving players meaningful choices is a lot of work. Having the main character’s personality change as a result of player choice, and having the story twist and branch off in response means developers have to create dozens of potential storylines for a single game, most of which most players won’t even see. It’s far easier, and in Assassin’s Creed’s case, far better to write a single, unchanging narrative for players to follow by the letter. This still gives players the chance to express themselves during missions and free-roaming in between, but also allows the writers to create interesting and emotionally complex stories, with believable, three-dimensional characters, and plot points and twists that feel plausible, justified, and that hit with more weight.

Connor’s struggle in Assassin’s Creed 3 is memorable because his personality clashed so notably with the other members of the cast, and with the players themselves. Connor may have been naïve about the way the real world works, but his outsider’s view allows him to look on situations from an entirely new perspective. His tragic childhood led to a sullen and stoic adult, but one that still saw the good in everything.

Assassin’s Creed 4: Black Flag’s Edward was a brash and headstrong young man who cared about nothing but coin and his own pleasure. He left his young wife behind and travelled the seas, directionless, never truly finding happiness, until he learnt about the Observatory and the riches it was said to possess. But in his single-minded pursuit of it, he lost touch with those he once loved, led his friends and his crew to danger and death, and almost lost himself in the process.

Upcoming game, Assassin’s Creed Mirage, may well be a return to form. Focusing on a single character – Basim – with his own predetermined characteristics, and returning to the gameplay roots that first put the game on the map, is exactly what the series needs right now. Hopefully, the game turns out as expected, and hopefully future titles follow suite, because exploring history’s playground is so much more fun when it’s presented in a realistic fashion.

In order to build a better future, Assassin’s Creed need simply look to the past.