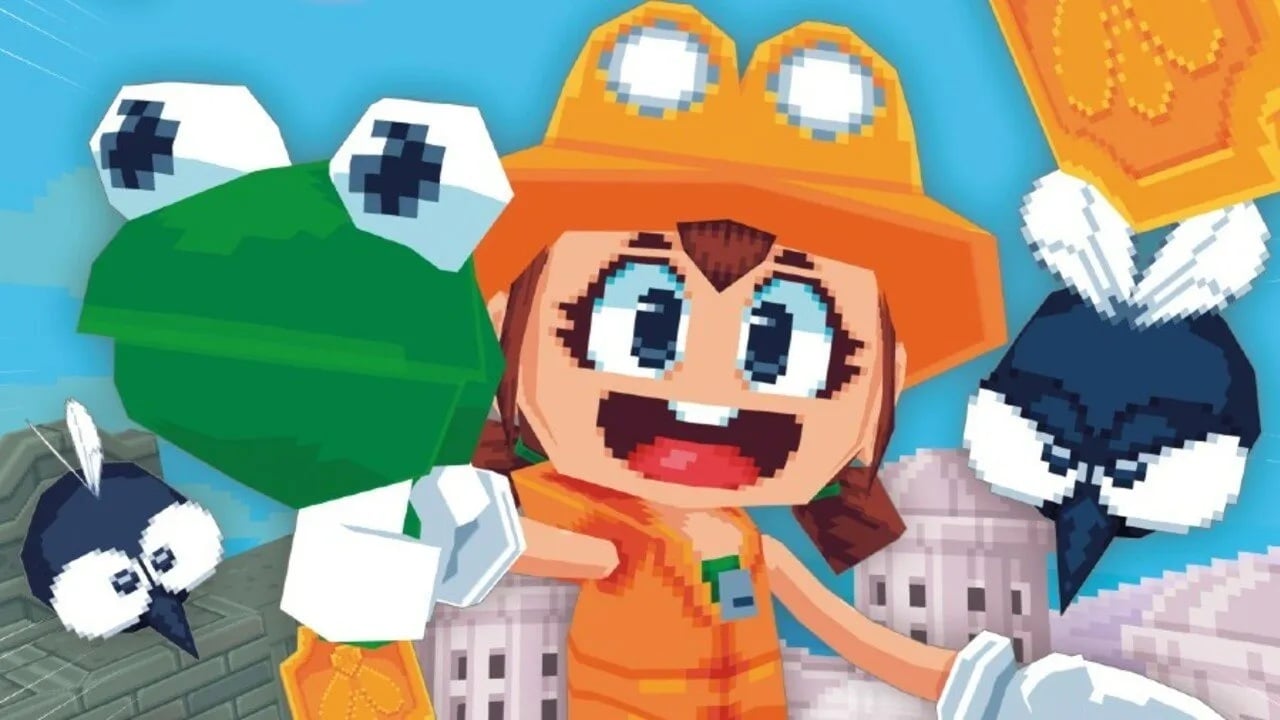 Paying homage to the era of the PlayStation 1 and Nintendo 64, Molegato’s platformer Frogun atmospherically echoes with a warm sense of nostalgia. On first impressions, it comes off as the type of game where you feel ready to sit down on a carpeted floor and stare up at the living room television for hours on end. While we may hold plenty of fond memories from the days of fifth-generation console gaming, it is undeniable that the first era of fully realized 3D titles have not aged particularly well. Frogun does not elegantly leap onto today’s lilypad of modernized throwback platformers, but at the very least, Molegato’s title does bring a sense of adventure.

In Frogun, players take control of a young girl named Renata whose renowned archeologist parents go missing after setting out on one of their usual adventures. Determined to discover where her parents went, Renata embarks on her own journey to find them. The only form of assistance she has is a sentient weapon her parents left behind called the Frogun, a frog-inspired gun that can only shoot a grapple hook-like tongue to grab and attach to distant objects and surfaces. Renata can change her outfit during her journey, but her titular weapon never changes in form or receives any enhancements.

Despite not being from the late 1990s and early 2000s, Frogun is most comparable to that of 2014’s Captain Toad: Treasure Tracker in terms of technical limitations and exploration. Players explore individual levels from a third-person isometric perspective to find several treasures and reach the end goal. While Renata is out to collect coins, find documents, and discover jewels, all that matters is that the player character finds the dark door at the opposite end of the map to move on to the next level. As alluded to before, the Frogun weapon gives Renata the ability to grab objects from a distance and shoot to walls.

Where Frogun thrives most is within its optional exploration. While reaching the end goal can be a mundane breeze that rarely changes from level to level, finding every collectible can be rather difficult. Players have to mess with the camera and explore every nook and cranny of each level (while not dying) to fill out their checklist of items. Frogun could be a fantastic collectathon game, but where the game struggles is in staying true to the modern standards of the platforming genre.

Molegato’s dedication to the PlayStation 1 and Nintendo 64 era ironically comes with the biggest drawbacks of that generation; the faulty camera and depth perception. Frogun is the type of game where precise jumps matter, yet the simplistic gameplay style can often get in the way of the player’s enjoyment. The game’s isometric perspective does not work well with how the camera functions. The camera can feel disorienting at times due to how it follows the player rather than the environment.

Once again making comparisons to Captain Toad: Treasure Tracker, in this type of game the camera would be far more fluent and effective to utilize if it stayed within a locked map position rather than following the player’s every move. When the player jumps, the entire screen jolts with them. Since the jumps are so rapid, this form of movement can be harsh on the eyes as certain sections of stages can require many jumps in a row. Even with a large shadow underneath the player, depth perception and movement can also become a prominent issue. It is easy to misalign jumps and be taken out by the environment.

To make things worse, Frogun’s camera headaches inferiatingly pile on to the game’s larger gameplay issues. There is a notable lack of level challenge and reasonable checkpoints to be found throughout the game. After players experience the first few levels of Frogun, the gameplay loop can become rather mundane due to a lack of changes or excitement. The game never hands the player crazy upgrades or scenarios that utilize the weapon to its maximum potential. Players only learn to be more careful with each level because the lack of checkpoints lead to restarting levels all over again.

There are two types of levels players will find outside the standard collectathons, being races and boss battles, but neither help diversify the game’s offerings or provide moments to write home about.

Over the course of Frogun’s story, Reneta finds herself rivaling a boy named Jake who believes she is after valuable treasure. While the race levels against Jake are long and contain plenty of shortcuts, the characters move incredibly slow. Frogun’s gameplay was not designed for this type of speed running element. On top of inadequately reflecting the slow and investigative feeling of the game’s other levels, Reneta cannot bump into Jake or she will take damage. Due to a lack of space and speed though, it is almost guaranteed the player will knock into Jake, or worse, fall off the map because the character is in the way.

On the other hand, the boss battles luckily come off as redeeming and rewarding. Not every single boss is memorable in terms of moves and strategy, but they can be quite a nice change of pace after playing so many of the regular levels and blisteringly annoying races. Like the standard levels, the bosses are once again another case of Frogun playing it safe and failing to experiment with its gameplay. If anything, the bosses perfectly capture the best and worst of Frogun; it’s a game with a memorable esthetic, some tedious design choices, and a mechanic that perhaps could be used more creatively but provides just enough to entertain.

Frogun doesn’t croak during its full playtime, but it also makes careless decisions that hinder what could otherwise be a rather great platformer. Even with a couple of accessibility updates in regards to fixing its camera system and some bug fixes, it would be difficult for Frogun to appeal to anyone outside of its target audience. As 2022 quickly becomes a year overflowing with frog-themed games, it is a shame that the blooming genre of ideas surrounding the amphibians is seeing some of its most notable ideas not live up to expectations.