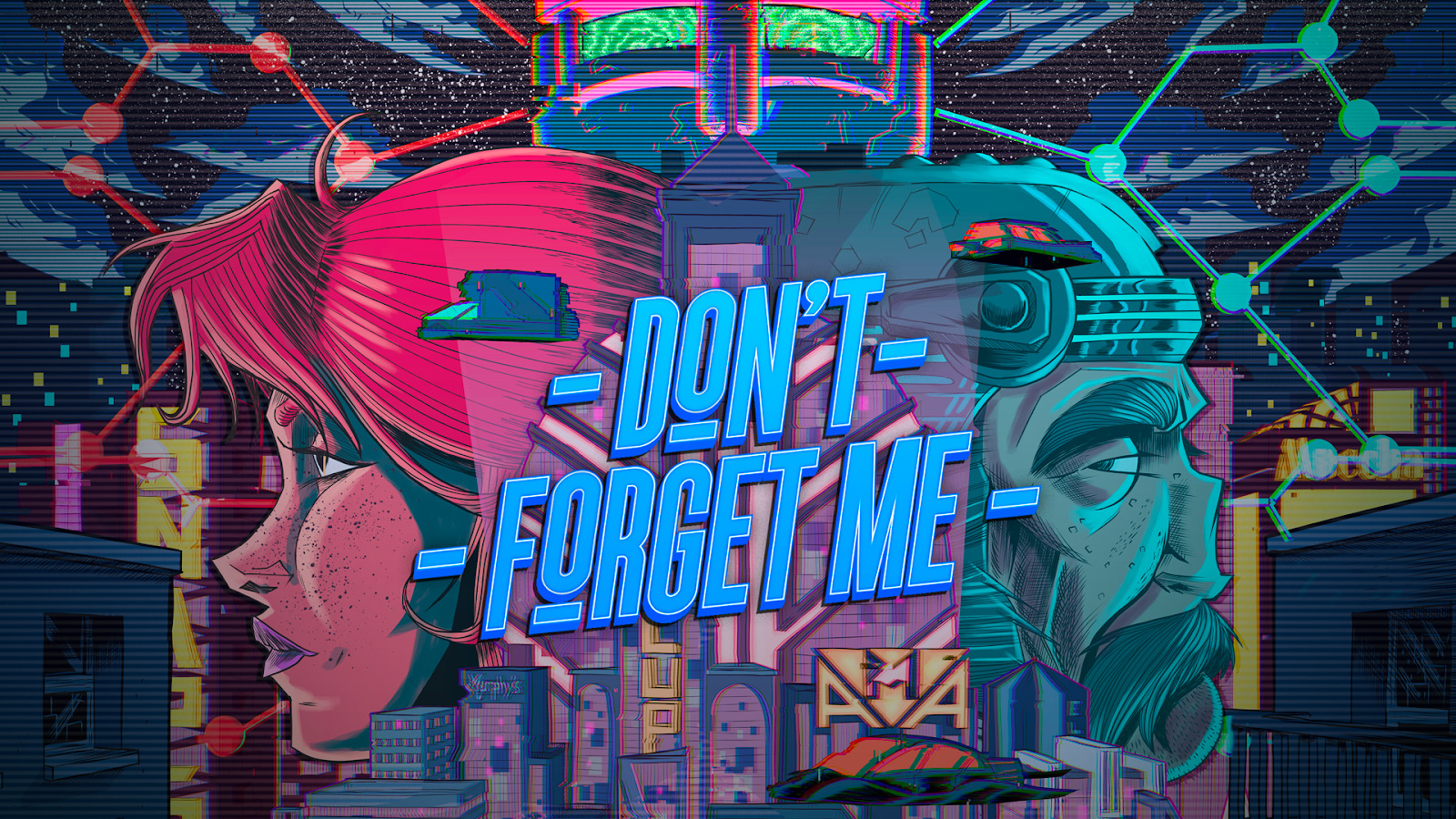 Few things are as powerful as memory. The brain’s ability to record information, parse it, and then pull it back up at a moment’s notice is key to any kind of mystery fiction. But what if it was impossible to forget things? What are the implications of memory being recorded, copied, and manipulated? Don’t Forget Me, a narrative adventure and the first game ever from Bordeaux-based independent game studio The Moon Pirates asks these questions and moreover the course of a twisty, open-ended story. While it doesn’t always nail what it’s trying to accomplish, the aesthetic, tone, and moral quandaries make Don’t Forget Me an incredibly compelling, albeit short, experience.

Don’t Forget Me plays with tropes and genre conventions even as it subverts them in places. The game begins in a gorgeously animated pixel art office and living space owned by Bernard, a guy with great facial hair and a metal plate on his head. Outside the window, the world is awash in skyscrapers covered in neon signs, a clear nod to Blade Runner. There’s a radio in the corner, and the player catches bits of text alluding to strife in the outside world: an activist group called The Forgotten have attacked a chip manufacturing plant. It’s effective table-setting; Bernard’s office alone is full of intrigue and the jazzy synth-focused soundtrack wonderfully sets the mood.

Things kick off when a woman passes out on Bernard’s doorstep. He takes her in, and after she comes to on his couch, she realizes she doesn’t remember anything that happened leading up to that point. Not an unusual premise for a noir mystery, but the catch is that in the world of Don’t Forget Me, the populace has had chips implanted in their brains that record everything they see and hear. Government-mandated at the close of The Meaningless War, these chips should mean that forgetfulness is near-impossible. Imagine Feed, minus the advertisements. But for Fran, as Bernard takes to calling the lead amnesiac, things are a little bit different. Fortunately, Bernard is a memory-reading specialist. He operates a black-market copyist shop, where patients (Fran thinks they should be called “clients”; after all, Bernard is hardly a doctor) can come by and have their memories copied onto external devices. The bulk of the gameplay is concerned with navigating memories of different characters and deciding what to do with those memories.

This novel, cyberpunk-esque concept leads to compelling gameplay. Don’t Forget Me isn’t exactly a point-and-click adventure, but it does share some of that DNA. Most of what players do in this game is read dialogue, as characters come in and out of Bernard’s shop with different requests. Memory copying is illegal, so those visiting Bernard often have ulterior motives to simply having a copy made of their happiest memory. After a little in-game time, Fran starts working as Bernard’s assistant, and they realize that there’s a market for memory manipulation in addition to simple copying. An early example is a terrifying high-stakes gambler, up to his ears in debt, who stumbles into the clinic and tells the duo that he witnessed a murder. He’s part of a group that gambles not just with money, but with the memories of other people. The mob is out to kill him unless he can forget what he saw. Fran and Bernard decide to take a look at the man’s memories and figure out what to do from there. Do they find out exactly what he knows and turn him over to the police? Delete the memory and let the man walk? There are several intriguing instances like this over the course of the game’s three to four-hour runtime, and multiple outcomes ensure that players will want to see where other choices take them.

Once a character comes in, talks about what they want, and sits in the chair, Bernard and Fran go to work. They put the patient under, like a routine dental operation, then root around their brain until they find what they want to see. In this mode, Don’t Forget Me turns into a bit of a text adventure. Players input keywords and see if they correspond to a character’s memory bubbles. Each successful keyword leads to the next, and within moments players have a sense of what a string of memories looks like. This is how Bernard and Fran interact with the first few NPCs, but soon enough, Symbiosis is introduced, and Don’t Forget Me turns into another game entirely.

With Symbiosis, Fran can enter the actual memories of an NPC. The aforementioned gambler, who wants to forget he witnessed a murder? Once Fran “jacks in” and sees the actual memory, the murder victim crumpled on the floor of a dingy casino, things look a little different from what the NPC first described. Similar to how crime scene recreation worked in Arkham Origins and Arkham Knight, players can look around a space and see for themselves whether or not a character was telling the truth. Memories don’t lie, but there is still room to interpret information differently. Some of the most interesting scenes in the game unfold when Fran finds information that doesn’t line up with what the NPC said they wanted. Putting a player in a moral quagmire may not be a new sensation in games, but it’s well implemented here.

Don’t Forget Me aims high. The concepts at play are intrinsically interesting. Themes of memory and regret, power and responsibility, creeping totalitarianism and peaceful freedom, are all at play. Though there are occasional grammatical stumbles, they feel forgivable from a small team. English clearly isn’t their first language, but a few misspelled words don’t detract from the high highs of the story. If anything, it’s commendable how well everything flows since so much of the experience is focused on finding specific keywords to unlock the memories of NPCs.

Don’t Forget Me is chock-full of references: Alien, Doctor Who, and Cowboy Bebop are all mentioned either directly or indirectly. But the game also draws inspiration from other video games as well. There are shades of Until Dawn in how choices affect the outcome of the game, and after rolling credits, players have the option to revisit the timeline of events and play them out in a different way. Certain characters in the game and their uneasy relationships to the development of the memory chip call to mind the tech in Eliza, the 2019 visual novel. The Moon Pirates have mentioned Her Story as a touchstone as well, and it’s easy to see how the open-ended nature of that tale influenced this one. Don’t Forget Me plays in interesting spaces. Though it may never move beyond a handful of fairly static environments and the gameplay is limited to dialogue and pixel-hunting, the attention to detail and intriguing story beats elevate Don’t Forget Me from its humble origins.