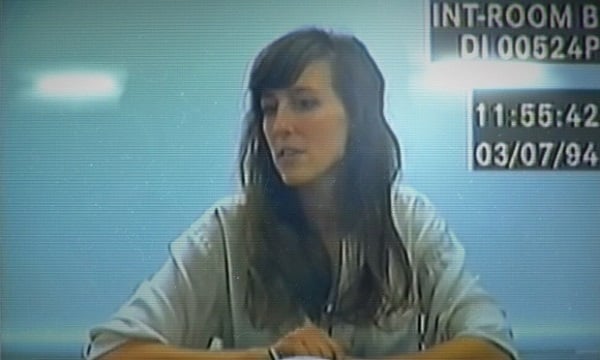 There’s a moment when you’re playing Her Story where you begin to really grasp the depth and scope of what its creator is attempting. For me, it came when I looked at the scattering of post-it notes stuck to my laptop and realized I still wasn’t sure at all where the truth of the story lied. Or “her” story, to be more specific.

Sam Barlow’s Her Story marks a bit of a paradigm shift for women in gaming. How’s that you ask? Well in presenting a gaming experience where all you do is watch a series of unordered videos of a woman (or women) who is never sexualized, never pigeon-holed, and never asked to conform to a set of gender stereotypes.

From the very beginning, Hannah exists as an enigma before the ever-watchful police camera, a camera which becomes your set of eyes in this investigation, and your only view into the elusive world of Hannah and her maybe-sister, Eve. You see Hannah sits at the center of a very grisly murder investigation concerning her deceased husband Simon. Eve eventually becomes embroiled in this same investigation, however, it isn’t long before the gamer is wondering whether these two women are even two women at all, or if they’re simply different facets of a single woman’s fractured psyche. As the interviewee is questioned on dozens of topics (as dictated by a police database search engine which is operated by the player), you are forced to try and discern where the through-line of all of these disparate threads of truth and lies, fact and fiction, lead. The women tell conflicting stories and stories that work together, they tell obvious lies and murky truths, they back each other up and incriminate one another. This dichotomy leaves the mind of the player whirling, and the deliberate scattershot timeline, told entirely in the order that the player decides to search words or names in the database, make for a narrative that is never entirely clear, and impossible to decipher with any real sense of confidence.

But all of that is just to set up what Her Story is and how it works. What does that mean to gamers, and particularly to the image of women in gaming? Well, quite a lot actually. As often maligned by the industry, women have long been typically characterized as damsels in distress, a collection of gender stereotypes, or, in the worst cases, just eye candy for what still remains something of a male dominated hobby. Her Story manages to subvert these expectations completely by presenting pictures of a female character that don’t at all adhere to these tropes. Hannah and Eve are portrayed as very intelligent and capable women, and their non-descript clothing, which changes as the dates of the videos do, are rarely the kinds of things we would associate with a sexualized woman. Hair pulled back and work scrubs, no make-up, and an exasperated edge, these are the marks of a side of women that we rarely see in gaming: it’s called reality.

Anyone who’s ever gotten to know a woman intimately knows that there are dozens of sides to the fairer sex, if not hundreds, and while something like that might seem obvious in what could arguably be called feminism’s heyday, it still stands as an achievement in the artistic community, and particularly in the gaming industry. This is the industry, you might recall, that was making news headlines worldwide after the GamerGate scandal emerged in 2014, beginning and centering around the idea of belittling, threatening, and slut-shaming prolific and outspoken women in the industry. What Her Story captures is quite an opposite to this often backward world of XBLers spouting words like “whore” and “bitch” on a regular basis, and male designers titillating themselves by creating digital fantasies of buxom huntresses and supplicative sirens that often verge on pornographic, is something you would hope we would have seen more often by now: a fully-defined, 360 degrees depiction of a real woman. More powerfully still, is that she remains resistant to your attempts to figure her out and pin her down.

Is her smile an invitation into the warm world of her past or is it an illusion to lull you into her web of lies? Is she flirting with you to curry favor, or is she just a friendly person by nature? The pensive sighs, the delays in the middle of sentences, the thoughtful looks, and the myriad of expressions and body language all paint a vivid picture of someone we want to understand but who instead becomes more puzzling with every new fact we learn about her. In this regard equal credit must go to the game’s sole creator, Sam Barlow, who worked so hard to flesh out his character(s), and to his muse, actress and musician Viva Seifert, who accomplishes the monumental task of keeping you intrigued and entranced as you pore over the many hours of her police testimonials.

By showing the world in this age what a woman can be as the center of a video game, and by using this example to tell one of the most memorable and engaging stories in years, Her Story is a striking example of what it can mean to be or to represent a woman in the annals and avenues of the digital realm. This post originally appeared at www.soundonsight.org–it has been reprinted here with the permission of the author.