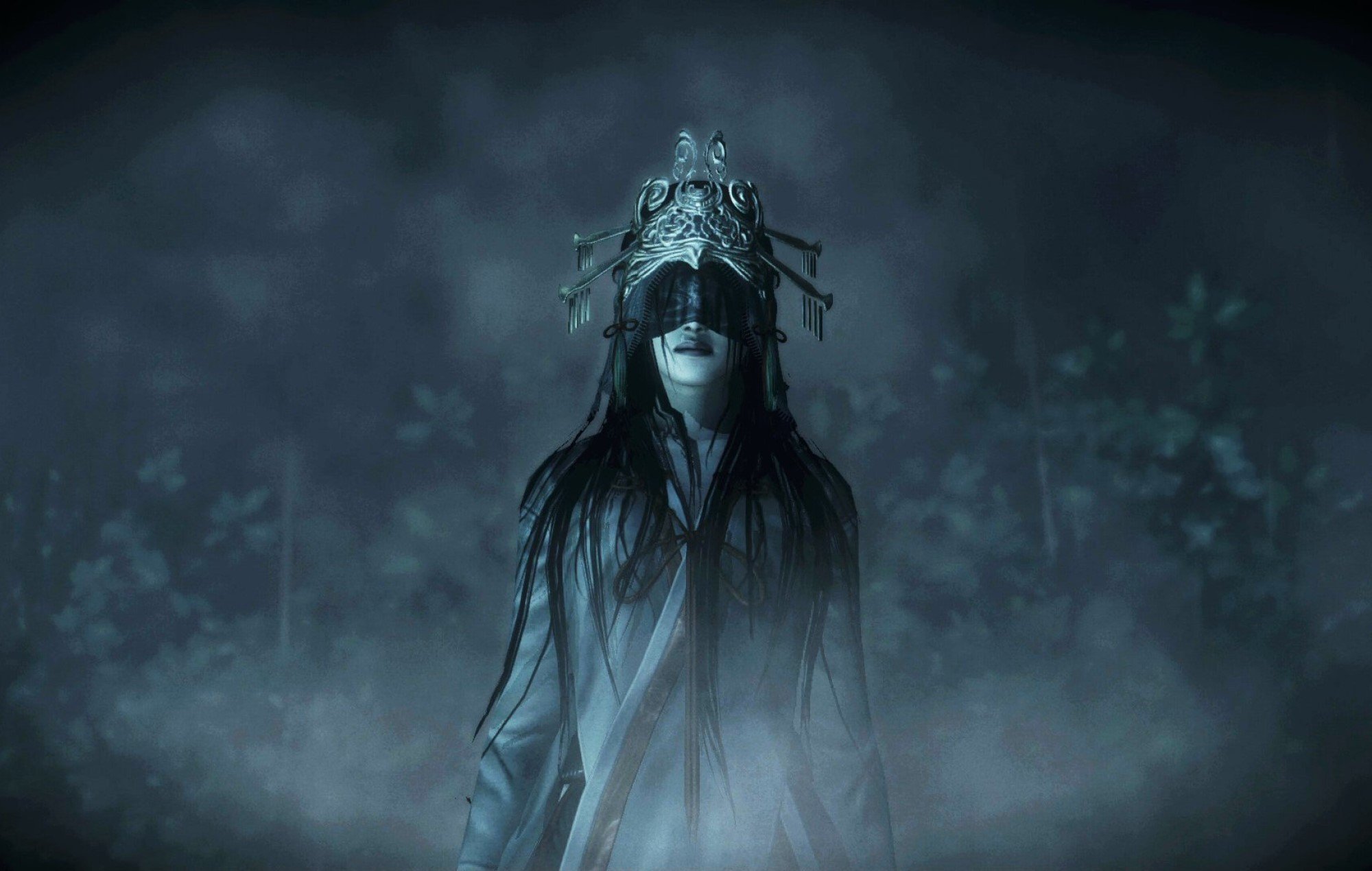 Some of our Most Anticipated Horror Games

E3 2021 had a few highlights for horror fans and a spattering of little things shown off as well. Sifting through for the cream of the crop I had to wade through an endless stream of Chernobyl-based shooters, but there’s so much to look forward to in the genre. There is a whole bunch of indie games breaking new ground in horror, plus some returning favorites and promises of new life to a few sub-genres. So join us in taking a look at just a handful of the exciting things horror fans have coming that were announced this year at E3.

Military horror is an interesting sub-genre that’s not really explored much. Clive Barker has done some great work in it, Spec Ops: The Line and F.E.A.R also have some great takes on it. The third Dark Pictures Anthology game, highly cinematic games focusing on choices shaping the narrative, brings the players along with a military unit in an Arabian desert where something sinister lies beneath the sands.

A buried Sumerian temple is unearthed. And, as usual, this long-forgotten place harbors a great evil that’s unleashed on an unwitting military group who were searching for chemical weapons. It may not hit on too many unique notes from the get-go, but the Dark Pictures games are all at least fairly solid with a great flow to them. The twists can be a little… Underwhelming, to say the least, but the ride is always a decent time. Nothing has yet hit Until Dawn‘s level of brilliance from the developers, but each new Dark Pictures game does bring a new flavour with it.

Dark Pictures Anthology: House of Ashes is developed by Supermassive Games and is set to release on the 22nd of November this year. It’s definitely one to keep an eye on.

We have known about this game for a hot minute, though getting a new trailer and learning a bit more about the Italian roots this psychological horror has, is very welcome. Martha Is Dead appears to play heavily with folklore and psychological elements, things that always make for intriguing morsels even when there’s a bit of ‘Eurojank’ in there.

Martha Is Dead is set against the backdrop of war, and a conflict arising between the Germans and the Allied forces after a woman’s body is found drowned. This woman’s twin sister dives into attempting to find the truth behind her death. All the while dealing with the weight of trauma and the horrors of war surrounding her.

Another game with the backdrop of war, but this time from the opposite side. There’s a lot to explore between grief and the atrocities going on all around. With some great imagery as a spooky piece of Italian folklore about ‘The White Lady’, a drowned maiden, Martha Is Dead is looking mighty promising.

Martha Is Dead, developed by LKA, is still aiming for a release this year, so we should be getting some Italian horror soon enough. Italy was king of horror for quite a while in the cinema world, and with Remothered and HELLSEED we’ve seen that Italy has a great approach to horror games too.

A pixel graphics 2D horror game, 2D horror is very close to my heart so seeing new takes is always a joy. Signalis was unveiled last year, a survival horror venture that seems to draw from a good few unsettling sources. Now we see a whole lot more, and a whole bunch of it is even more to be puzzled over.

We don’t know too much about just what Signalis‘ story will be, but it seems that the protagonist’s spaceship has crash landed on a planet engulfed in tundra. To make matters worse, some strange entities seem to be pursuing her. There’s also a very involved mystery between a numbers station and a whole lot of quickly flashed imagery.

The sound design of the trailer, along with the intriguing sense of a deeper puzzle to be solved, drew me right in to this game. Numbers stations are inherently fairly creepy, and set against the strange and cryptic poems in German, and a haunting shot of the entrance to something out on the snowy planet, there’s a whole lot to unpack here. 2D horror games often put a lot into their surrealism and puzzles, Signalis seems to have not skimped out on either.

Signalis is being developed by Rose-engine, but we still have no hard release date, so it’s one to keep a close eye on as things develop further.

This was a fairly hype one, dampened somewhat by a ream of Chernobyl based horror tinged shooters announced alongside it. Finally the S.T.A.L.K.E.R. franchise is back, GSC Game World bringing us an atmospheric new game, and all that ominous goodness we love in the series. Back to the Chernobyl exclusion zone, and the dangerous anomalies are ever-present.

The S.T.A.L.K.E.R. games are first-person shooters with a few amazing touches that make them iconic. Outside of the solid gameplay and incredible environments, there’s also the immersive world it creates with Ukrainian voice acting and focus on sound design. Heart of Chernobyl takes us back into the exclusion zone and right back into deadly situations. Some interesting characters seem to be there for us to meet, and a greater story to unfold as we get deeper in.

Heart of Chernobyl looks like far and away the most polished of the Chernobyl shooters coming, and there’s a whole world of horror hiding in that zone waiting to be uncovered. It’s been a long while since we got a new S.T.A.L.K.E.R. game, so this was a big surprise to hear. The game’s have always been notoriously unstable though, so we’ll have to wait and see how things are shored up.

S.T.A.L.K.E.R. 2: Heart of Chernobyl will be coming on April 28th, 2022. It’s looking solid already from this first little peek, though is it too much to ask for just one “Get out of here stalker” from the trailer?

Now we did know about this being a thing, but getting to see concrete gameplay and extra footage is a real win. Seeing an Evil Dead game that doesn’t look hard janky is amazing, and getting a trailer narrated by Bruce Campbell himself is just an added bonus. Developers Boss Team Games have stated that the entire universe of Evil Dead (save the remake) will be featured in some way, the sights and sounds drawing from the films as well as the STARZ original series Ash vs. Evil Dead.

The trailer shows off just what sort of game it is, a co-op and PVP multiplayer title pitting the heroes (from the iconic Ash Williams to other protagonists from The Evil Dead right through to Ash vs. Evil Dead) against the Deadites, but that’s not all. We also get the Kandarian Demon, which players can take control of to put themselves up against the heroes, using the deadites as well as the environment itself to bring down the forces of good.

The locations (including the iconic cabin in the woods), as well as the plethora of weapons in your arsenal, make for a kickass looking experience. Nothing spooky of course, but Evil Dead deeply embraces its horror core whilst never shying from over-the-top silliness. Set to drop this year, we should be getting a taste of groovy in the near future on PC, PS4, PS5, Xbox Series X|S, Xbox One, and Nintendo Switch.

From the creator of Inside and Limbo comes a new harrowing experience, following a family attempting to get back together in what appears to be a rather dire war between humans and an alien race. Considering the emotional beast Inside was, we can expect some great things to come out of Somerville as well.

The art is lovely, with a foreboding aura around every corner and some great shadow play used within the trailer. The style is unmistakable, Dino Patti (co-founder of PlayDead, developers of Inside and Limbo) put together a new team in Jumpship, and their debut is this promising venture into a sci-fi tinged horror.

We haven’t seen too much just yet, with quick glimpses at some terrifying locations and what appears to be similar puzzle/platforming style gameplay to the aforementioned games. We don’t even get too solid a look at what the threat really is, but there’s a good few things that give an unsettling feeling to the situation. From spires pointing down from the sky, to strange creatures wandering in the background of shots, and of course whatever was throwing shadows at the very end.

Somerville is set to release in 2022, though no concrete date has been given. Somerville will be on Xbox and PC, and will be available through game pass on release.

The latest entry into the legendary Fatal Frame series is getting a remaster, but that’s not all. It’s also being released on all modern platforms, including PC. The game may not have quite the same profound effect as Crimson Butterfly, but it’s certainly still a great entry into the series, with some incredible visuals and an oppressive atmosphere that the Fatal Frame games do oh so well.

The remaster and re-release means a lot more than just finally being accessible for most people. It also means the series is free, and depending on how it does we could even see a new game follow it. No longer is the series locked into Nintendo consoles, but now we can snap photos of the spirit world on PC, PS4, PS5, Switch, Xbox One, and Xbox Series X|S. The series hasn’t hit a Playstation console since 2004 with the third installment, despite originally being exclusive to Sony, so it returns home after 17 years.

Fatal Frame: Maiden of Black Water follows three protagonists as they travel to Hikami Mountain, an area plagued by a string of suicides and spiritual encounters. Our three main characters uncover the dark secrets hiding between the trees, all the while fending off oppressive spirits with the Camera Obscura. Survival horror royalty, the Fatal Frame series’ approach to gameplay gets honed even further with familiar mechanics returning and being polished up for the latest entry.

It’s exciting news, and it could mean everything for the future of the influential series. If we’re lucky, we could get a new installment next! There’s no release date yet, though an October/November release is fairly likely should it drop this year.