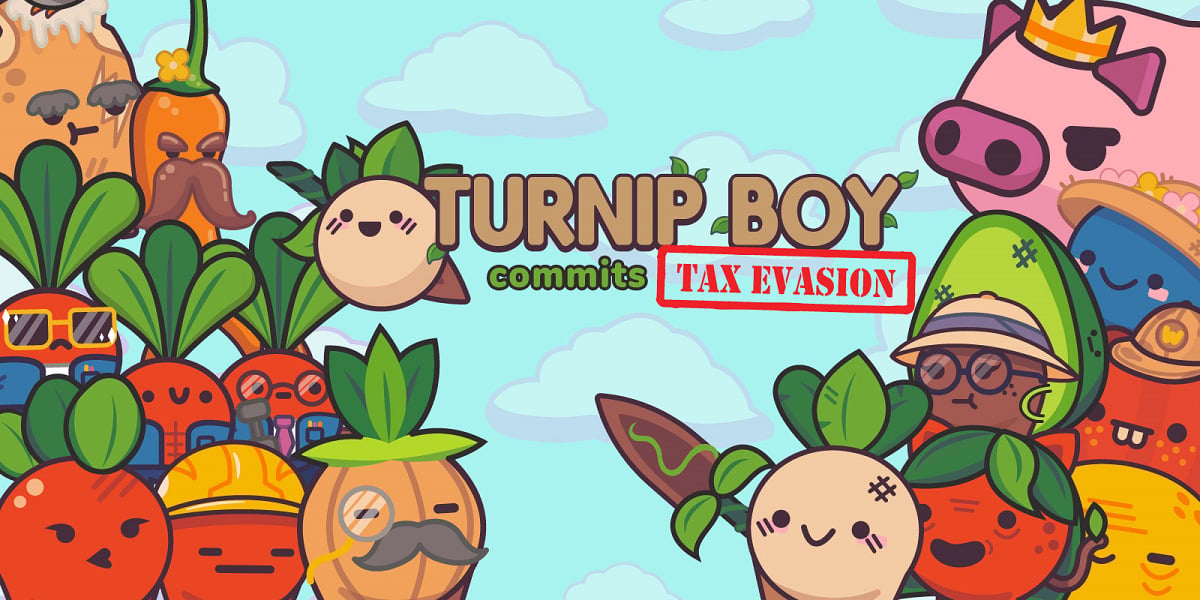 Only three things in life are certain: death, taxes, and…well, more taxes. There are few things as universally maligned as having to pay taxes, and Turnip Boy embraces this fact by tearing up any tax-related documents he finds. So begins Turnip Boy Commits Tax Evasion, a firmly tongue-in-cheek adventure about paying off debts, evading the IRS, helping others, and uncovering the shockingly real secrets this cartoony world has under its surface.

Instead of focusing on delivering a strong central narrative, Turnip Boy Commits Tax Evasion operates on a flexible premise that branches off into many entertaining side stories and activities. Evicted from his home and faced with an overwhelming amount of debt that must be repaid to the town, Turnip Boy is given tasks to complete by Mayor Onion to help work off his dues. Each item requested by the mayor takes our little silent turnip to a new area of the relatively small (but varied) map, complete with inventive dungeons and all manner of citizens to meet.

It’s here where the core of Turnip Boy Commits Tax Fraud comes into play: quest chains. As Turnip Boy gets sent to different areas in search of the aforementioned items, he inevitably comes across a range of colorful fruit and veggie characters that either need something delivered, found, or taken care of. Scratch their back and they’ll scratch yours, giving Turnip Boy a key item that someone else needs. Deliver that item and the recipient hands off another, and so on until a boss is reached or a collectible (namely an extra heart or a cute hat for Turnip Boy to wear) is attained.

It’s a simple loop, but everything else about Turnip Boy is so bursting with personality that no interaction ever feels too methodical or similar. From being the middleman for a back alley deal to violently settling a rent dispute between two unlikely roomies, each scenario is made inherently humorous thanks to Turnip Boy’s cutesy art style and deeply referential writing. Low-hanging memes? Check. Classic internet references? You bet. There’s even fun poked at streamer culture–and the joke sticks the landing. If there’s one thing Snoozy Kazoo got right, it’s audience (and self) awareness.

If Turnip Boy’s writing and knack for gags is its greatest asset, its moment-to-moment gameplay is more of a mixed bag. Inspired by early The Legend of Zelda titles, players can make Turnip Boy dash and perform a weapon jab on enemies, grass, and more in and out of combat. However, he trips whenever he dashes (something that’s only cute the first few times), and wielding weapons feels floaty, slow, and just generally unsatisfying. Since fighting enemies isn’t inherently fun–and since there’s no reward for doing so–I often found myself dash-tripping around them unless otherwise necessary.

On the other hand, using the rest of Turnip Boy’s toolset is much more enjoyable. Since the entire game is garden-themed, one of the main tools in his arsenal is a watering can that can be used to grow health, watermelons, plant-based bombs, and more. As the campaign progresses, you’ll find gear that lets you interact with these objects, like boots for kicking the bombs and special gloves for moving the watermelons. It’s here where things get the most interesting mechanically, especially later on when a Portal-esque teleportation device is introduced along with some mind-bending (though never especially challenging) puzzle design. It’s in these instances where Turnip Boy shines the brightest, and thankfully they’re frequent enough to make a significant impact on the experience.

Though its addicting quest chains and smart environmental puzzles are clear highlights, Turnip Boy wouldn’t be nearly as charming without its absolutely delightful art direction. Simple yet enchanting, everything from the adorable character designs to the charming overworld and welcoming UI exude a level of polish hard to come by. And this is to say nothing of the OST, which is a surprise standout in how varied and catchy so many of the tracks are. The themes playing during later dungeons–and during the unlockable true ending, which is definitely worth going for–are especially impressive.

Turnip Boy Commits Tax Evasion is a short, silly adventure that turns goes to some surprisingly dark places despite its cloyingly cute aesthetic. At the same time, between running gags, clever references, and plenty of meme-filled dialogue, Turnip Boy knows its audience and commits to it. Though the basic combat isn’t necessarily enjoyable in its own right, the story, off-the-wall characters, and clever puzzle design undoubtedly outshine it. While it’s all over in just about three hours (four to get 100%), Turnip Boy is a clear labor of love that’s well worth experiencing for anyone who has a bone to pick with taxes.