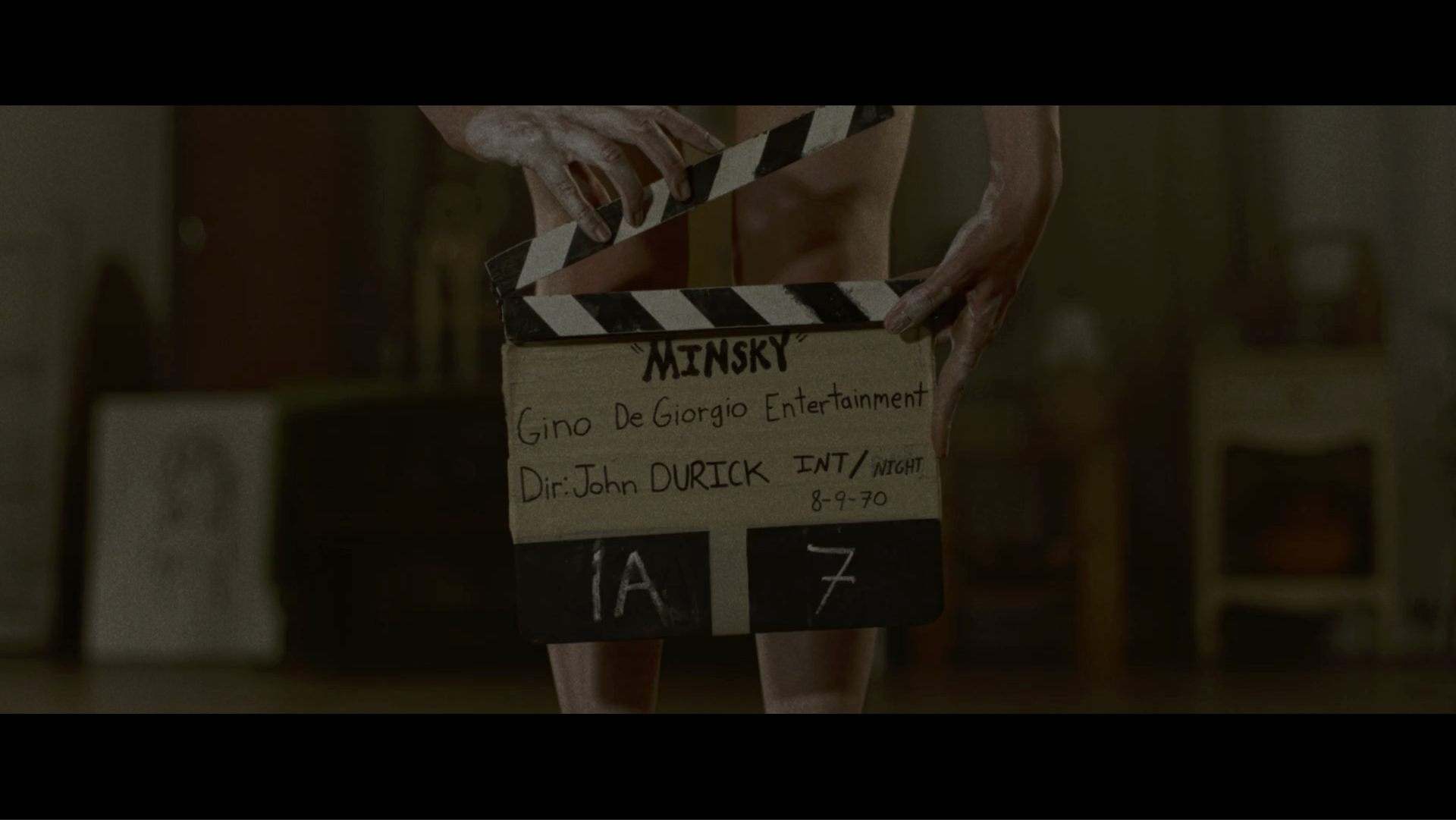 Whatever happened to Marissa Marcel?

This is the central question of Immortality, the completely singular new release from Half Mermaid, an independent video game studio founded by Sam Barlow of Her Story fame. Immortality is many things: a superb character drama, a compelling mystery, and a deconstruction of the relationship between films and their audience. It is a scathing critique of the film industry; it is a biting social commentary. It is terrifying, it is bleakly funny, it is delightfully ambiguous. A leap forward for interactive fiction, Immortality is as playful with form as it is function. Simply put: Immortality is a must-play game.

No Need for Save the Cat

As a developer, Half Mermaid is interested in expanding the perception of what a video game can look like. Immortality bills itself as a “restoration project”; as players invest themselves in the story of Marissa Marcel and everyone in her orbit, they will start to feel like a film editor piecing together cells in a dark room. The mechanical structure of Immortality meshes perfectly with its themes and overall narrative structure.

In previous Barlow works Her Story and Telling Lies, players navigated film footage to unearth hidden truths. Immortality operates in much the same way. Players are tasked with analyzing and organizing footage across three films. Each film is distinct, but all three share commonalities- most notably, the presence of forgotten film star Marissa Marcel. Through careful viewing, players can trace her legacy through decades of work. But this is hardly as simple as fast-forwarding a VHS or clicking through the scenes of a DVD. Instead, players build a library of film clips from all three movies: high-concept 1968 religious drama Ambrosio, pulpy detective story Minksy, and psychological 90s thriller Two of Everything. Players only have access to a clip or two in the beginning and must unlock additional footage through interaction. When watching the footage, players can pause, rewind, and, most importantly, swap to interactive mode. Certain people or objects can be clicked on in this mode, and then the magic of Immortality is revealed: through interaction, players are transported to viewing a different film clip across time and space that matches what is currently onscreen.

This may sound complicated on paper, but it is simple in practice. Players can easily jump to the start or the end of a piece of footage. Inspired by Moviola editing machines in the early days of film, the UI allows players to fast-forward and rewind as needed. Even players who don’t have any interest in filmmaking will pick up a few terms by the end of a playthrough, as phrases like “match-cut,” “running a series,” and “slate” become internalized. A filmic education is hardly necessary to enjoy the twists and turns of Immortality.

Say the player pauses during a particularly intense scene in Minksy. They pause, rewind a few frames, switch to interactive mode, and click on the grasping hand of a detective with nothing to lose. The cut transitions to a top-down shot from Ambrosio, where a friar is gripping a particularly juicy orange in his hand. Another pause; the player clicks on the round fruit, and the scene changes to one from Two of Everything where a fruit bowl is centered onscreen. While not every match cut is seamless, it is incredibly satisfying to jump from one era to another, following characters and discovering thematic links. Nearly everything can lead to something new–there is great satisfaction in clicking on the same actor across different movies and unearthing new footage, or following a familiar face as they go from background actor in one film to a different role in another. It is not only worth it, but necessary to watch scenes multiple times and interact with different objects to uncover all the restored film.

Each new scene slowly fills out the film or image grid, Immortality‘s main UI. The grid can be organized in several ways- players can choose to arrange scenes in the order they were filmed, going all the way back to the mid-60s, or can group clips together by project. There is even a “favorites” feature, allowing players to string together clips in whatever fashion makes sense to them. For editors and film buffs, the entire UI experience of Immortality is a game in itself, but the piece is just as satisfying as a slowly-unfolding mystery.

Players are encouraged to read the “About” section of Immortality upon starting the game. There is a brief biography of Marissa, which provides context for the narrative. Reading this snippet also clues the player in to what to expect: how much of what they’re about to see is real? More importantly, does it matter?

Looming over every frame and behind-the-scenes blowup is the ever-present question: just who is Marissa Marcel, anyway? And beyond that: where is she now?

There is a line from Kurt Vonnegut’s novel Mother Night that warns readers, “We are what we pretend to be, so we must be careful what we pretend to be.” In Immortality, actors across all three films portray fanatics overcome by lust, artists who live on the razor’s edge between truth and lies, and pure psychopaths who radiate barely-concealed rage. But as players collect footage and interact with scenes, they’ll soon start to see beyond what the directors intended. The more layers Immortality unfolds, the more fascinating it becomes.

Immortality is perhaps at its best as a character study. Marissa Marcel has been forgotten by the film industry, as every movie she was set to appear in was never released for one reason or another, but watching Marissa in action, it is difficult to imagine why. In every piece of footage, from scripted scenes to table reads to interviews, Marissa exudes an otherworldly charisma. A laugh, a smile, a look straight down the barrel into the player’s eyes–Marissa will capture the heart of anyone watching. She is written as having that ineffable movie-star quality, an X-factor that only a gifted few possess. But while Marissa is an undeniably talented performer, those pulled into her orbit are just as fascinating.

Across every film are a handful of recurring characters. In Ambrosio, the Hitchcock-inspired director employs a director of photography named John Durick. He and Marissa hit it off; he likes that she’s not afraid to stand up to her director’s misogynistic tendencies, while she loves that he wants to take bold artistic risks with his shots, frequently employing nudity and long, lingering takes. His first film as director, Minsky is a chance for Durick to put Marissa in the spotlight in something they wrote together. But off-camera, there is simmering tension among the rest of the cast as they question Durick’s integrity (a hot mic picks up one crew member asking another: “You know that Marissa is fucking John, right?” moments before “action” is called) and Marissa’s objectivity. An on-set accident before Minsky‘s release compels Marissa to forsake the public eye; she isn’t seen again for nearly thirty years, until the now-ascendent Durick convinces her to act in his latest film, the drama Two of Everything. But the relationship between the two artists has soured in the intervening three decades, and as filming continues, Marissa, Durick, and everyone else in the production are swept up in a chaotic whirlwind of jealousy and revenge.

None of this is explicitly spelled out to the player. There is no codex or family tree linking one character to another, or even a cast list of major players. Instead, players rely on ingeniously matching frames to draw their own conclusions and make their own connections. This game focuses heavily on the role of directors, and by allowing players to direct their own experience, achieves beautiful artistic symmetry.

Drawing thematic connections between all three films and their surrounding apocrypha (interviews with late-night hosts, wrap parties, and casting calls) is asking a lot of the player. But Half Mermaid has provided the tools to seamlessly navigate this story. The story is dizzyingly ambitious and executed near-flawlessly. Questions are posed and paid off hours later; portentous quotes from one film resonate differently when juxtaposed with outtake footage from another. The clear character-building and thematic design of Immortality is an astounding feat and a sly, subtle rebuff to the bombast of AAA games writing. There is more communicated in Immortality with a look and a nod than an entire monologue’s worth of text in God of War.

In one of the clips from Minsky, a character in the film talks about wanting to create “Art that touches infinity.” John Durick wants that to reach viewers in a new way with his avant-garde style; he intones, “If we keep it real, the audience won’t realize they’re being spoken to directly.” Immortality is operating on multiple levels simultaneously, and as players come to grips with the game’s structure, they’ll have an experience unlike anything else they’ve played or watched before.

Immortality is a celebration of several kinds of media. It subverts audience expectations like “found footage” masterpiece The Blair Witch Project; players who carefully scrub through footage and interact with everything they can will find a few horrifying surprises in store (a tip: play with headphones on, and in any scene where a dull roar fills the ear, rewind the footage). There is much to appreciate in allowing players to adapt their approach to the narrative. Similar to how Punchdrunk theatre company’s epic, genre-defying performance piece Sleep No More disrupts the relationship between audience member and play, Immortality reframes how a player can interact with a narrative. Few video games approach storytelling with the reverence and verve attempted here. Immortality is a welcome shock to the system and an unforgettable experience.