Let’s get this out of the way now: the Nintendo Switch’s voice chat solution is really bad. There’s absolutely no getting around it. The Switch should have native voice chat capabilities, and the workaround of a “Nintendo Switch Online app” is both inconvenient and disappointing. Players can’t chat in lobbies outside of matches, and there’s no way to send messages to each other. What’s worse, the user’s screen has to stay on for the chat to work, and it can’t run in the background. This spells certain death for players’ phones during lengthy play sessions without sitting next to an outlet or carrying around a power bank. If just these two issues were resolved the voice chat app might be bearable; this is the limited version, after all. But not being able to turn your phone’s screen off and chat (like you can with Discord or in actual phone calls) spells an early death for the app’s chat capabilities for anyone old/knowledgeable enough to use one of several other available voice chat apps.

But with this dud of a voice chat solution comes a silver lining that shines quite bright–SplatNet 2. The first in what will be a line of companion apps, SplatNet 2 works every bit as well as you might’ve hoped. The app features extensive Splatoon 2 stat tracking that updates automatically via your Nintendo account. It tracks everything from your total turf inked to the results of the last 50 matches you played, complete with the option to go back and see exactly who you played, what gear they wore, what gear you wore, and when you played them. The app also keeps tally of your wins and losses, as well as an average of your kills and special uses per battle. You can see how much turf you’ve inked, how many wins you’ve notched and your top winning streak for every single weapon you’ve ever used. All of this amounts to a serious godsend for hardcore players of the first game who prayed for dedicated stat tracking after struggling with the incredibly clumsy SplatNet 1. In a cool twist, SplatNet 2 allows players to order gear directly from the app that can be later picked up in-game. The integrated store actually features SplatNet-exclusive gear, a nice incentive to keep dedicated players coming back and checking for restocks. The app also lays out the day’s map rotation so players can plan ahead for which times they’d like to hop in and play their favorites. And, of course, separate Ranked and League Battle stats are also present and accounted for.

If it isn’t already apparent, SplatNet 2 is packing a ton of Splatoon 2 functionality. I’d honestly recommend the Switch Online app to any serious Splatoon 2 players just for the SplatNet 2 service. And this is where the true hidden potential of the Online app lies–within the companion apps. It’s tough not to speculate what the next ones will be given just how well-made SplatNet 2 is. A Mario Kart 8 Deluxe app that compiles all of your race data thus far would certainly be welcome, but not necessarily as exciting. ARMS now has native stat tracking via a recent update, so that isn’t quite as essential either.

No, if I was a betting man, I’d say Pokken Tournament DX will be the next major game to get a companion app. The fighter is prepped for a second life on the Switch, and having its own dedicated stat tracking app next to Splatoon 2 would play a huge part in keeping it in the mindshare of gamers. Pokken also features avatar customization via purchases with in-game currency just like Splatoon does, so the Pokken app could offer an in-app shop to buy clothing. Beyond first party, it’s easy to imagine Rocket League getting its own companion app once it releases this holiday. It’s doubtful that FIFA 18 or NBA 2K18 would have apps just because they’re yearly entries, but it might happen if they’re popular enough. They don’t all have to be multiplayer games, however. The Xenoblade Chronicles series has historically had tons to keep track of in each of its entries, so any support for Xenoblade Chronicles 2 would be welcomed with open arms. Moving to 2018, we could very possibly see a Fire Emblem app or (if it’s still coming next year) a Shin Megami Tensei app as those games also tend to have deeper systems to keep track of. The doors are really wide open to speculation here. 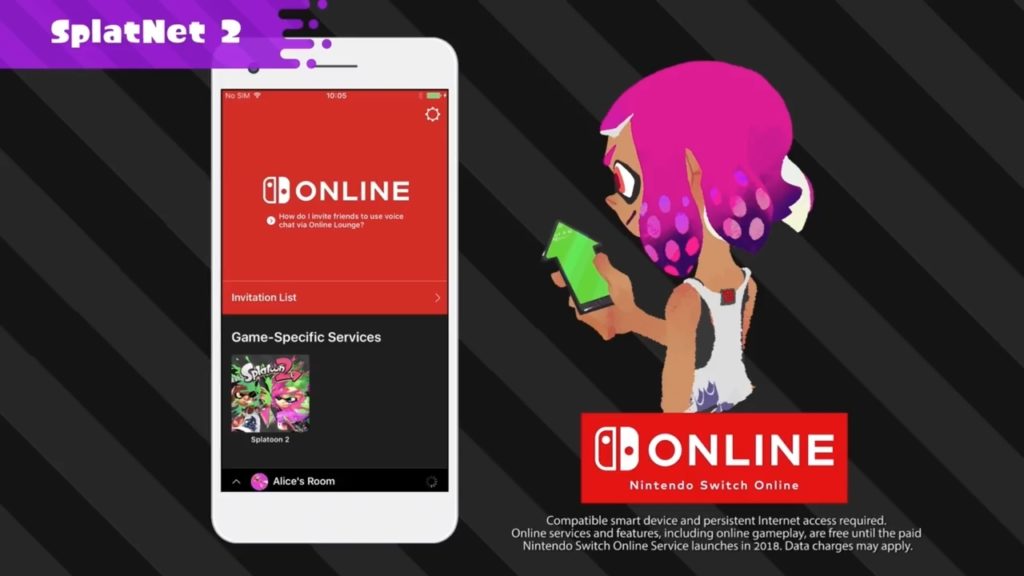 In the end, the Switch Online app is both a bummer and surprisingly impressive. What it fails at in voice chat it balances out with its first integrated companion app, SplatNet 2. While Nintendo still has a long while to update the app before they start requiring gamers to pay, they’ve already laid a rock-solid foundation for other companion apps to follow. If nothing else, there should always be at least one reason for Switch owners to keep the app installed on their phones.