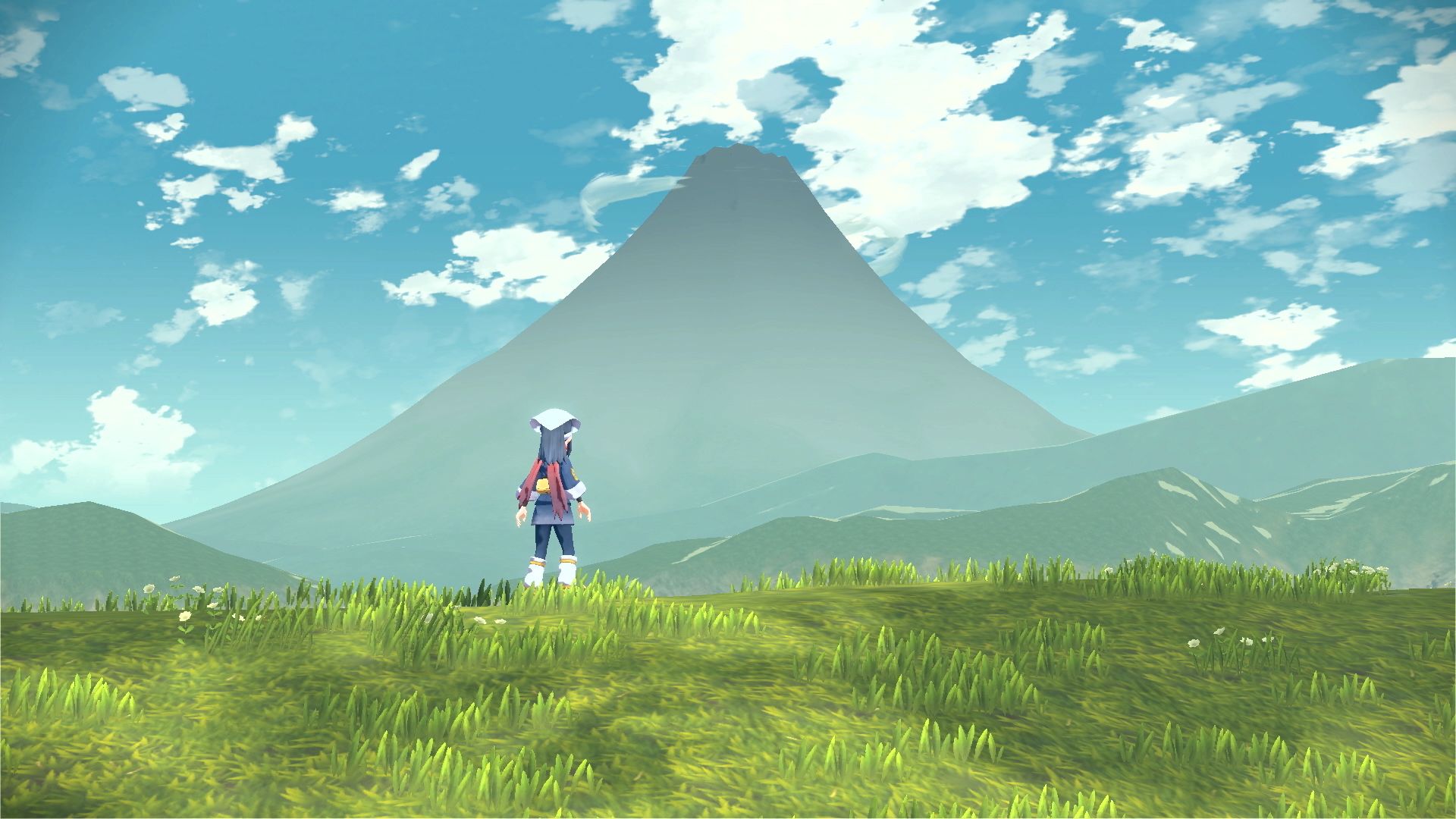 Pokémon Day has come and gone, and at long last Poké-fans have been treated to the 25th anniversary Pokémon Presents featuring the long-awaited reveal of Pokémon Diamond and Pearl remakes alongside the unprecedented surprise announcement of Pokémon Legends: Arceus. The latter is a game said to honor “past Pokémon games’ core gameplay while infusing new action and RPG elements.” Set in the “Sinnoh of days gone by,” this prequel of sorts, though noticeably rough around the edges, immediately distinguishes itself with its seemingly open world, new approach to wild Pokémon encounters, and even its sharp blue and silver title coloration.

Infusing gameplay with some enticing new concepts while allowing developer Game Freak to explore the intriguing past of Pokémon is an interesting new direction, though early footage leaves plenty of questions and a few hanging concerns, particularly about frame rates and lasting Wild Area concerns. Taken as a whole, this was much more than I think anyone anticipated in terms of fourth-generation representation and could be a promising turning point for the Pokémon franchise. Taken as the independent titles that they are, however, some serious qualms concerning the treatment of the Diamond and Pearl remakes and the future of the franchise remain.

Titled Pokémon Brilliant Diamond and Shining Pearl (BDSP), the Sinnoh remakes are the first main series Pokémon titles to be outsourced to another studio for development, in this case, ILCA, who previously worked on Pokémon Home. Described as “faithful” and “nostalgic,” BDSP are said to be the rebirth of Diamond and Pearl on Nintendo Switch where “the original story has been faithfully reproduced, and the sense of scale in the originals’ towns and routes has been carefully preserved.” Beyond toting the quality of life improvements of modern titles and a new “chibi” or subjectively “cute” art style mimicking the original DS sprites, there is no language to suggest these remakes will be anything other than one-to-one recreations of the originals on new hardware. Not only does this fall short of the sterling standard set by Game Freak with all previous remakes, it gives virtually no reason for owners of the original titles to invest outside of current day conveniences. Sadly for Sinnoh fans looking for an enhanced remake in line with Pokémon’s previous efforts, BDSP and Arceus seemingly fail to provide a satisfying substitute, even collectively.

Historically, each Pokémon remake has utilized the same engine and features as the current generation beginning with FireRed and LeafGreen on Ruby and Sapphire engine and more recently Omega Ruby and Alpha Sapphire (ORAS) on X and Y’s. Consequently, one would expect Diamond and Pearl to be recreated on Sword and Shield’s engine. This, however, presented Game Freak with a dilemma: should Diamond and Pearl, 2D, topdown games, be fully remade in 3D in the style of Sword and Shield, potentially making them feel like entirely new games, or should their top-down style be preserved? Obviously, Game Freak and ILCA decided on presenting Diamond and Pearl’s traditional visual style in 3D, recreating the world sprites of the original titles as the 3D, chibi models visible in the trailer. Recently, the Legend of Zelda team at Nintendo did something nearly identical to this with the Game Boy title, Link’s Awakening when they handed it off to the studio Grezzo to be developed for the Switch as a faithful recreation of the original game with a charming, new visual style.

As was the case with Link’s Awakening, opting to preserve the top-down nature of Diamond and Pearl may have been the right choice in this instance. However, from its reveal, Link’s Awakening was toting new features available in the new version of the game, including new arrangements of the classic soundtrack perfectly matching the new visual and tone of the game, the ability to equip more items courtesy of additional buttons not available at the time of the Game Boy, and new constructible, customizable dungeons known as Chamber Dungeons. Similarly, every preexisting Pokémon remake has worn its new additions on its sleeve, sometimes literally. The reveal trailer for Omega Ruby, Alpha Sapphire, though only thirty seconds long, revealed the game cases with Primal Groudon and Primal Kyogre on them respectively, queuing fans in on the inclusion of X and Y’s Mega Evolution mechanic in the games. HeartGold and SoulSilver were immediately selling fans on the introduction of a full-fledged Pokémon follow feature and the “Pokéwalker” pedometer packaged with the games. If Brilliant Diamond and Shining Pearl are going to include new, potentially game-selling features, why not mention them in the reveal?

It’s true that the covers of the games haven’t been shown, like with Omega Ruby and Alpha Sapphire, and cover Pokémon Palkia and Dialga could be getting new forms, presumably Gigantamax forms in keeping with the latest mechanics introduced in Sword and Shield. The official BDSP webpage makes no mention of anything like this, however, instead teasing Palkia and Dialga as fans have always known them and assuring the pre-initiated nothing more than that they’ll “revisit familiar places and relive familiar scenes.” This doesn’t necessarily mean that there won’t be additional features within the game, but with the game being outsourced, it seems more unlikely that fans won’t see many, if any, enhancements over the originals, Gigantamax, Mega Evolutions, or anything else. Consequently, given a cursory glance, Brilliant Diamond and Shining Pearl fail to measure up to the standards established by Game Freak themselves through all previous remake entries. Granted, BDSP may feature an endgame “Platinum” Episode in the vein of ORAS’s Delta Episode, working additional content from the original games’ third, enhanced version (Platinum in the case of Diamond and Pearl), but what does that offer players who already own Platinum and Diamond or Pearl?

Perhaps if the remakes’ visuals weren’t as divisive as they are, that would be enough of a reason to pick these titles up. Unfortunately, that’s where the remakes are picking up the most flak. Online, charming, topdown, current generation games like Link’s Awakening, Animal Crossing: New Horizons, and the yet to be mentioned Pokémon remake, Pokémon: Let’s Go, Pikachu! and Eevee!, are being juxtaposed against BDSP and used as examples of how the remakes could and should look. While certainly subjective, there is a notable lack of polish and detail comparatively, and with release expected within the year, it’s questionable whether “still in development” is the actual culprit. I’ll reserve further judgment until closer to release, but so far the aesthetics certainly don’t help BDSP’s case and might be more detrimental than an actual selling point.

Pokémon Legends: Arceus may very well feature a number of the anticipated mechanics seemingly missing in Brilliant Diamond and Shining Pearl and simultaneously totes an attractive art style many in the fanbase were expecting the remakes to display, but ultimately fails to provide a satisfactory solution to the call for a Diamond and Pearl remake on par with what came before. Without the same starters, routes, characters, story, and time period tethering it to what came before, Arceus, by design, doesn’t serve the same purpose as a remake. It may be set in Sinnoh, but Arceus intentionally distinguish itself as something new, so while the quality of the game itself may justify some of the decisions surrounding the remakes proper for some, for fans who’ve waited years for and want nothing more than the fourth generation’s premier titles to receive a much-deserved renovation of the same caliber as their predecessors, it’s difficult not to feel slighted by BDSP, even in the face of something new and exciting. This goes without mentioning potential concerns about pricing, particularly if the remakes are sold at full price, which would make them twenty more dollars for “conveniences of the modern Pokémon series.”

Pokémon appears to be taking bold steps forward with Pokémon Legends: Arceus, and perhaps those ends justify the decisions around Brilliant Diamond and Shining Pearl. But as a staunch Pokémon fan and avid Generation IV lover, it’s difficult to not be disappointed with how Diamond and Pearl’s remakes have been handled. Uninspired visuals, a distinct lack of enhancements, and even ironically lackluster names, Brilliant Diamond and Shining Pearl seemingly fail to live up to the standard of a Pokémon remake and seem like a developer’s decision to take the path of least resistance at every turn even if it means a lusterless product. It’s disheartening when, in the advent of something new and exciting, like the “Pokémon Legends” moniker, the first question that comes to the player’s mind isn’t an enthusiastic “what’s next?” but instead, “what did it cost?” In this case, it seems to have cost some very precious gems a well-deserved polish.