The quality of Kickstarter games has varied wildly ever since smaller developers began using it as a way to crowdfund their projects. Gems like Shovel Knight, Hollow Knight, Broken Age and more were all birthed from the platform, so it goes to reason that Kickstarter games can indeed find success if executed correctly. Unfortunately, Pixel Sand is not one of those games. It never promises to be anything spectacular, but the final product nonetheless ends up feeling more like an early prototype than a full-fledged release.

Pixel Sand is a side-scrolling puzzle-platformer that’s all about manipulating elements to your advantage. Players take control of Vurhne, a boy raised by a wolf that sends him away after learning about his mysterious powers. As amusing as this premise is, it’s never explored any further than beyond a couple lines of dialogue in passing. In fact, it’s hard to even call this a premise; there’s no follow up in any of the game’s eight levels. Instead, it feels like this was a throwaway idea the developers had and later decided to scrap in development. This trend of underdeveloped ideas continues in other levels too. For example,  there’s a level where Vurhne is in a makeshift classroom learning how to control a new element, the wind. Did he somehow find this magic school after leaving home? How’d he get in? What’s happened in the meantime? None of these questions are ever answered, furthering the feeling that these levels were just haphazardly thrown together. 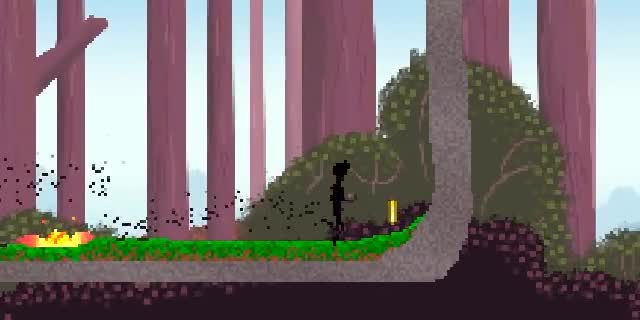 Pixel Sand’s gameplay hook comes from being able to control an abundance of elements and making them interact in unique ways to solve environmental puzzles. These start out with fairly basic things like using fire to burn down a tree standing in your path, but later levels have some genuinely head-scratching moments. Players will manipulate everything from water and fire to things like lasers and termites. The game is at its best when it presents you with puzzles that make you pause and consider how the different elements at your disposal can affect each other. Occasionally, I sat back and did have to think about what, say, lightning might do to glass, or how rock could react to liquid nitrogen. The platforming itself is as basic as it comes, but the game has brief moments of brilliance when forcing you to thoughtfully juggle your elements to progress past obstacles.

It’s too bad, then, that almost half of the levels on display here either feel incomplete or downright broken at times. It’s one thing for a puzzle game to give players a tough challenge based on critical thinking, but it’s another to make players wrestle with inconsistent elemental physics. One particularly frustrating section has the player fill pits of lava with water to provide enough buoyancy to soften Vurhne’s fall into the pit. The water dissipates, so Vurhne has to fill the pit, fall in quickly and jump out before he touches the lava at the bottom. The problem is that Vurhne sinks straight through the water into the lava unless the player hits the jump button at just the right moment to make him float. Furthermore, the water distribution has to be perfect to even have a chance at floating. This incredible specificity ended up leading to dozens of deaths that genuinely felt unfair and unnecessary. In a game with as much control over the environment as Pixel Sand, there have to be more specified environmental rules in place to ensure a tighter gameplay experience. Scribblenauts is a great example of a game that gives players a huge amount of control over the world around them while expanding the options to finish a level, and not limiting the player. As is, some puzzles in Pixel Sand just feel like the bad community-created Super Mario Maker levels–the seemingly impossible ones that only the creators know how to beat. 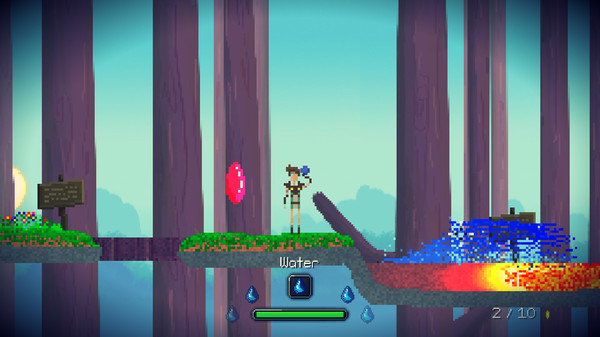 All of this isn’t to say that Pixel Sand is entirely without charm. The pixel art style is quite pretty in a retro kind of way, where each of the elements looks different when used. Part of the fun is definitely trying each one out to see their pixel forms. Environments are basic but serviceable and vary nicely throughout the game. Pixel Sand also has a great sense of humor that’s both very tongue-in-cheek and self-aware. Signs littered throughout the levels offer funny commentary on the current puzzle, events in the game, or just random quips and memes. Personal favorite: An old wizard who follows you throughout the game shows up near the end to comment “I like robes! They’re easy and comfy to wear!”

Pixel Sand has all the trappings of being a fun game, and for the most part, it is in the earlier levels. Being able to control a huge variety of elements in pixel form has moments where it’s as cool as it sounds. Using fire to turn sand into solid ground always felt cool, as did freezing water with liquid nitrogen. It’s a real shame, then, that the game is plagued by half-baked design decisions and a completely lackluster amount of packed-in content. There is a silver lining in that the game supports mods, so creative players can take it upon themselves to make substantial, fun levels to share with the world, and others are free to play as many of them as they want. However, on its own Pixel Sand feels unfinished, and including mod support ends up feeling more like an out for the lack of content than a bonus feature. If that was the hook all along, it might’ve been better to advertise Pixel Sand as a toolbox with a few tutorial levels instead of a fully functioning game in its own right. As is, it’s hard to recommend this one.