In the time since Final Fantasy’s release, the JRPG formula has seen countless iterations. Developers big and small have tackled the genre, expanding and experimenting on the simple turn-based formula of heroes fighting evil. Gimmicks were added, systems redefined, and stories woven into grand tales of intrigue, subterfuge, and wonder. Over thirty years later, Octopath Traveler brings it back to basics and focuses on the essence of the JRPG. 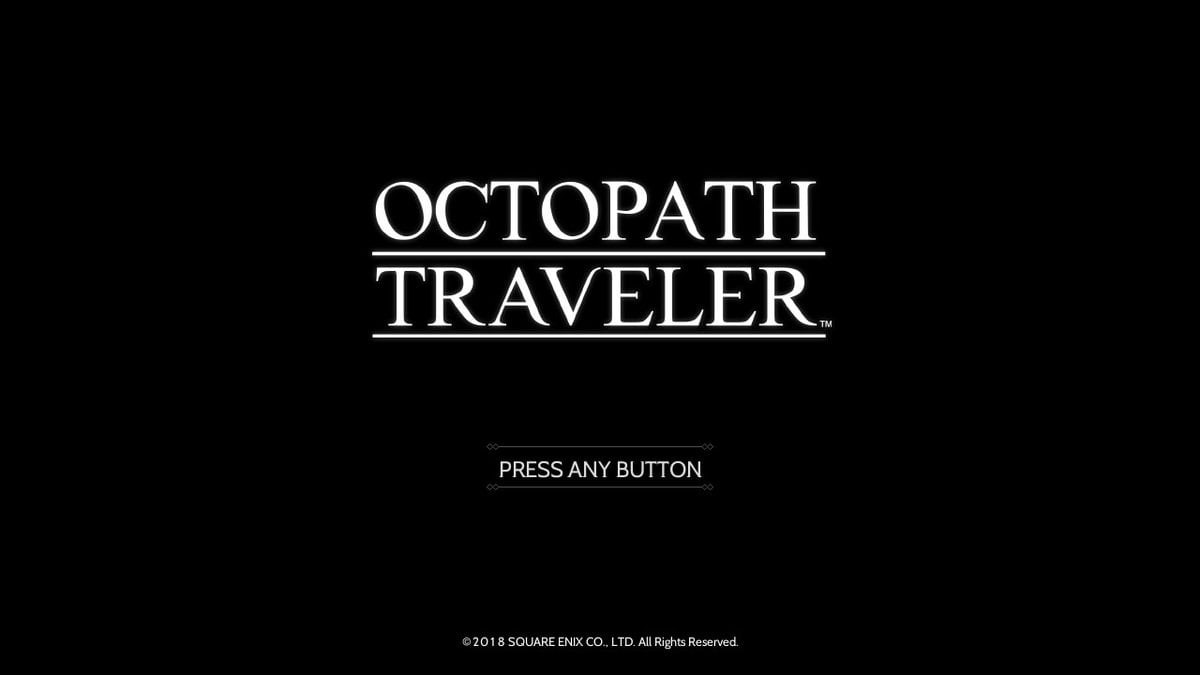 True to its name, Octopath Traveler follows a cast of eight characters living across the expanse of the nation of Orsterra. Players traverse the icy valleys of Flamesgrace, the burning sands of Sunshade, and the serene beaches of Rippletide.

Each character sets off on a journey, a call to action rousing them to their feet. Whether it’s a thirst for revenge or desire for adventure, each of the eight heroes models after refreshingly simple archetypes.

While there exists a loose overarching thread, the game opts for a free-form approach with the narrative. Each member of the party has a unique storyline split up into four episodic chapters. In trading depth for breadth, Octopath tries for experimental storytelling that doesn’t always hit the mark.

One of the most glaring issues is how these stories largely exist within their own lanes. For the most part, there’s no interaction whatsoever between storylines. This calls for more than a little suspension of disbelief when you shepherd around eight people who travel together for no discernible reason.

“The basics of getting from Point A to Point B are there; you fill in the blanks.”

Yet for all its faults, Octopath does a wonderful job of building its world and characters in small, but meaningful ways. While overarching interactions are nonexistent, characters do speak to each other in small dialogue skits called “Travel Banters”. During the main questlines, party members weigh in their thoughts on current events.

This creates a loose notion of camaraderie that can be taken one of two ways: lazy or inspiring. As a lazy tactic, it certainly feels like a cheap way to tie everything together. It does little to change the fact that these characters have no explicit reason to be a team.

However, this approach allows individual players to come away with something different and personal. Imagination takes over as it pieces together seemingly disparate story elements. The basics of getting from Point A to Point B are there; you fill in the blanks. 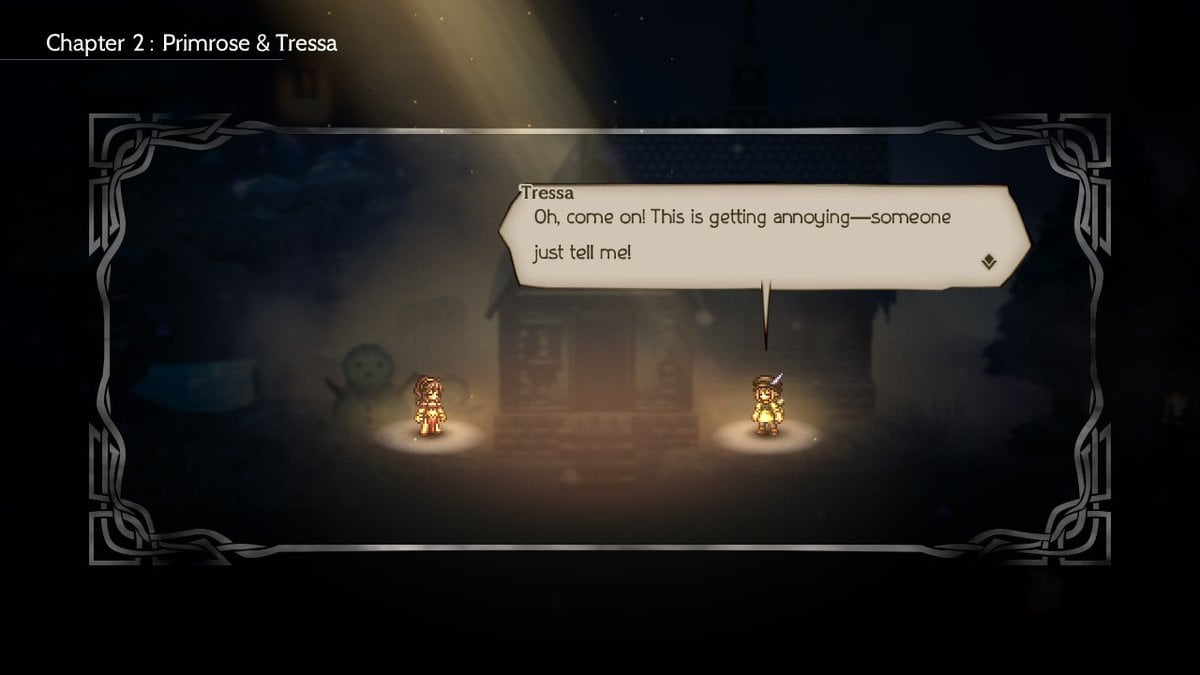 Despite some of the flaws in storytelling, Octopath Traveler’s narrative execution remains otherwise fantastic. Unlike many of its relatives in the JRPG genre, Octopath eschews the standard “save the world” epic.

Yet the game never forgets that it inhabits a world of swords and sorcery. Like many other tales of fantasy, it transports you into an exotic world through interesting hooks and relatable characters.

“What lies beyond the horizon?”

One appealing aspect of Octopath’s narrative is its focus on smaller, personal stories. No evil wizard-king is plotting the apocalypse, nor is there some foul demon corrupting the land. Octopath Traveler’s protagonists seek out simple things like duty, justice, and adventure.

Even though the main cast never truly ties their adventures together, Octopath employs a wide variety of tools in order to suspend disbelief. 2D spritework in 3D environments, NPC backstories, and free-form progression allow players to make of the game what they will.

By leaning on these simple, yet effective tools, Octopath lets “suggestion” do most of the heavy lifting. This gives the player enough contextual clues and information for them to infer meaning on a given situation. Where it existed in older games due to technological limitations, that approach comes back in Octopath as a deliberate stylistic choice.

Framing this nostalgically wonderful style is a vibrant orchestral score. Octopath Traveler has an incredibly varied soundtrack that shifts to reflect characters and mood in memorably subtly ways.

The 16-bit spirit is alive and well in Octopath. Though the game experiments with JRPG conventions, it never forgets its roots. 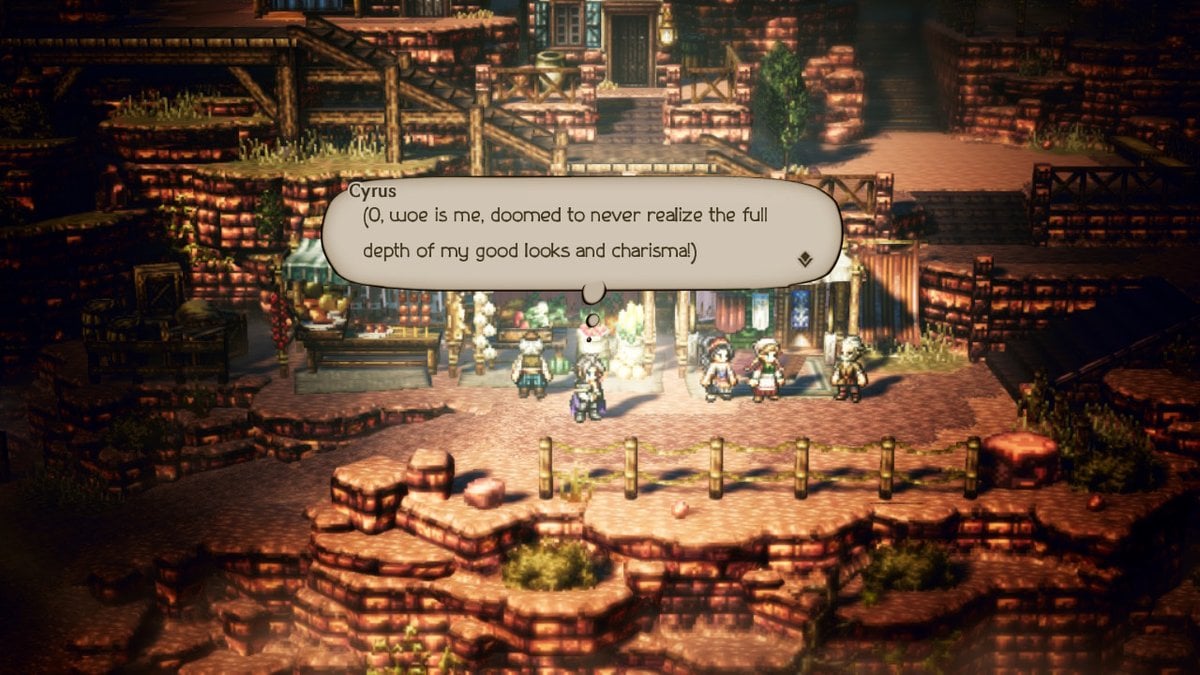 The Tools for Success

How do you execute the JRPG formula? The basic premise amounts to your team fighting lock step with small groups of enemies, dancing turns back and forth. You see some places, dive some dungeons, and grab loot to see a list of numbers go up. Rinse. Repeat.

In seeking to capture the essence of 16-bit era games, Octopath has carried over some of the less desirable qualities as well. RNG once again rears its ugly head with random encounters and spotty enemy AI. Though they’re not game-breakers by any means, they create mild annoyances that non-JRPG fans may have a rough time dealing with.

Alongside these quality-of-life gripes is Octopath’s utterly formulaic gameplay loop. You repeat the same cycle of cutscenes, town exploration, dungeons, and the big boss at the end. Yet thanks to a few smart choices in design it rarely gets old.

Where many JRPGs typically experience some degree of fatigue in pacing, Octopath’s freeform structure mitigates much of that. The chapters are there to start up in whatever order you’d like. This leaves you free to do things like side-quests, optional dungeons, and farming at your own pace. You never feel like you’re diverting away from the “main game”.

Here we get to the meat of Octopath Traveler: its combat. The battles offer a tactile satisfaction in so many different ways that it’s an absolute joy whenever the battle music kicks up. It lays out in the typical menu-enemy navigation format but adds a few different systems to give players more control over combat.

At first glance, Octopath’s battle screen looks like any other JRPG: your team on one side, the enemy on the other. Your party and the enemy alternate turns, tossing blows back and forth until one side reaches 0 HP. The key difference, however, lies in three distinct mechanics: BP, Breaks, and Weaknesses.

Weaknesses are a mini-game in and of themselves. Every enemy has a given amount of weapon and spell types they’re vulnerable (e.g. swords, axes, and fire). These weaknesses are initially hidden to the player, revealed only when they strike with the correct attack type.

This directly ties into the shield mechanic, which gives enemies reduced damage from all attacks. Every time an attack hits an opponent’s weakness, it ticks down the enemy’s shield counter. Should shields be reduced to “0”, the enemy “Breaks” and players have a full round to pound the snot out of them.

In the vein of Bravely Default’s titular system, players spend BP points to power up their abilities. It applies to both basic attacks and special abilities, which gives an incredibly broad set of options to plan around. It’s a simple yet effective system that applies to a wide variety of situations.

Different jobs further open possible strategies. Each character can take on a different subjob, meaning that they learn the skills and abilities of a second job. This makes for some interesting combinations, like Warrior Clerics, Merchant Scholars, or Dancer Thieves. Between BP, Breaks, and jobs, Octopath‘s combat is both deeply strategic and accessible. 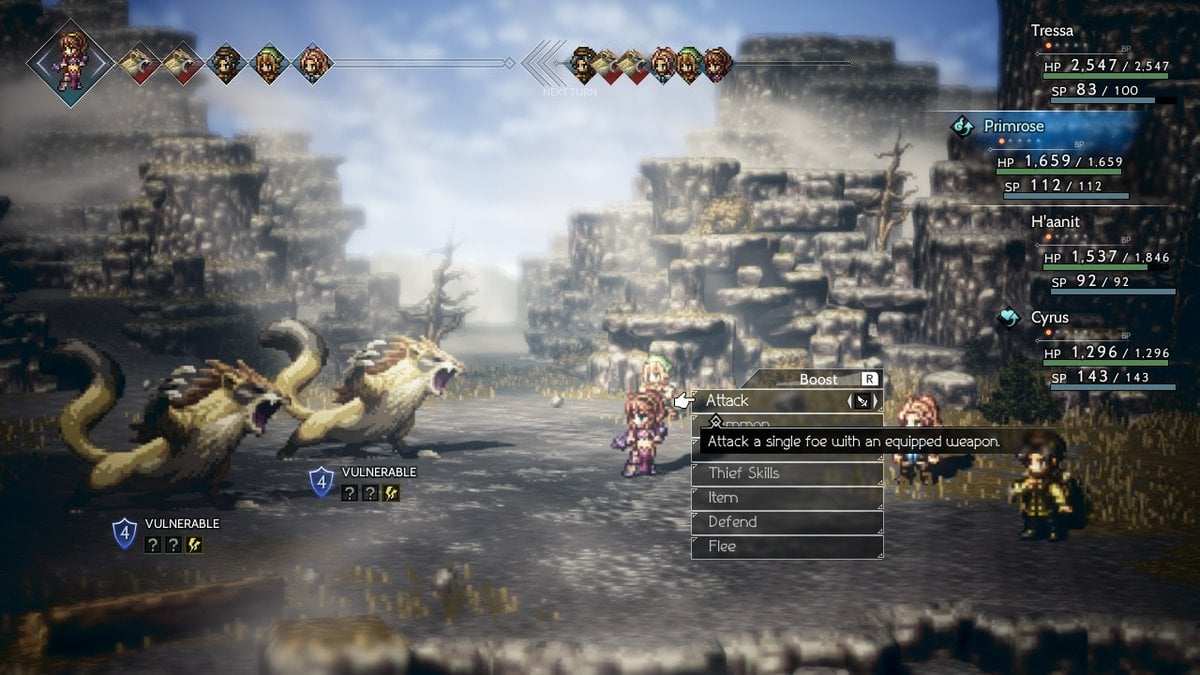 Carve Out Your Own Path

Octopath straddles this weird middle line of both restricting the players and giving them an immense amount of freedom. It breaks many of the classic JRPG conventions by allowing you to progress as you see fit. Yet, there are more than a few key spots where it relies on rather lazy mechanics to give players the illusion of choice.

Path Actions are perhaps the biggest offender of this design philosophy. Each character has a unique Path Action that ostensibly ties to their character. Flavor and mechanics-wise they fit decently well. However, their execution in the main story is contrived at best.

Outside of these instances, they’re rather fun tools to engage with Octopath’s world. Path Actions can be used on most interactable NPCs. You can gain followers, challenge them to duels, inquire about their history, or steal their possessions. It’s all fair game.

Despite being a linear game, Octopath lets players determine how they journey forward. The tricky thing here comes from the understandably contentious implications that arise from this. On the one hand, you have eight stories that do little to tie each other together. On the other, this freedom has created one of the most free-form JRPGs I’ve played in recent history.

Octopath Traveler proves that you can innovate a decades’ old formula. It doesn’t always get it right, but when it does it provides some of the most fun you’ll have with a JRPG. Take from it what you will. 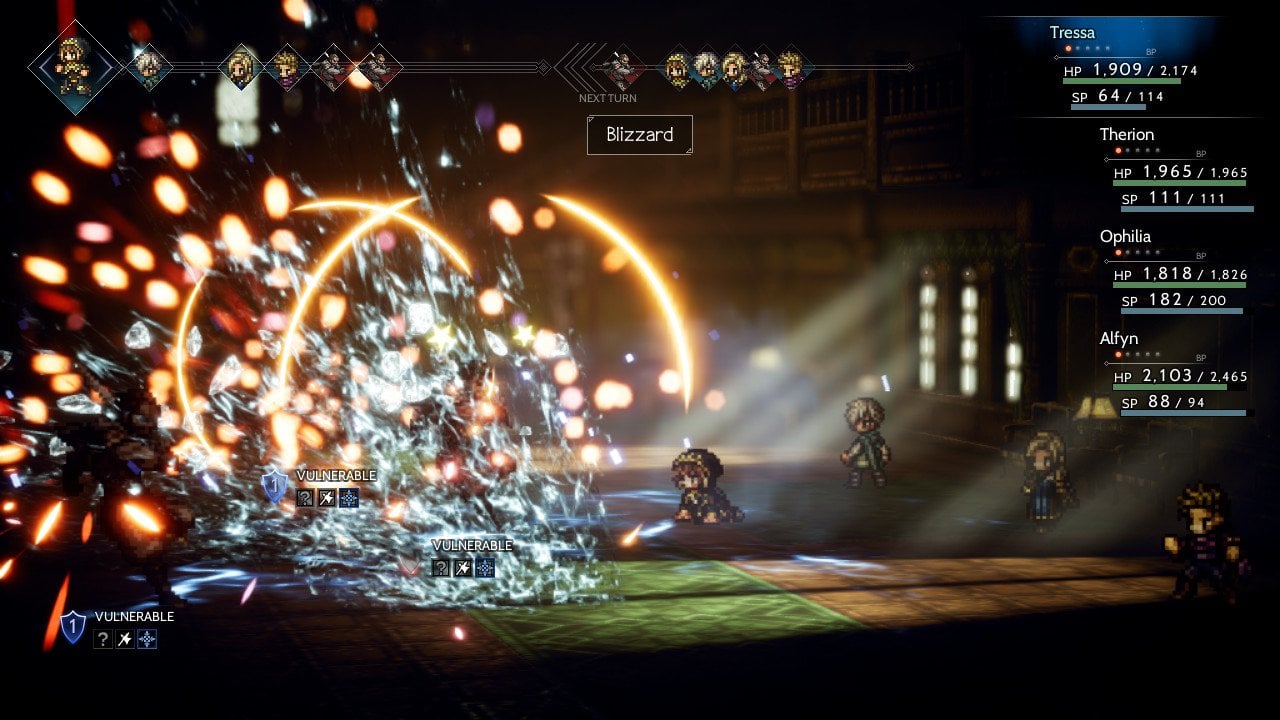