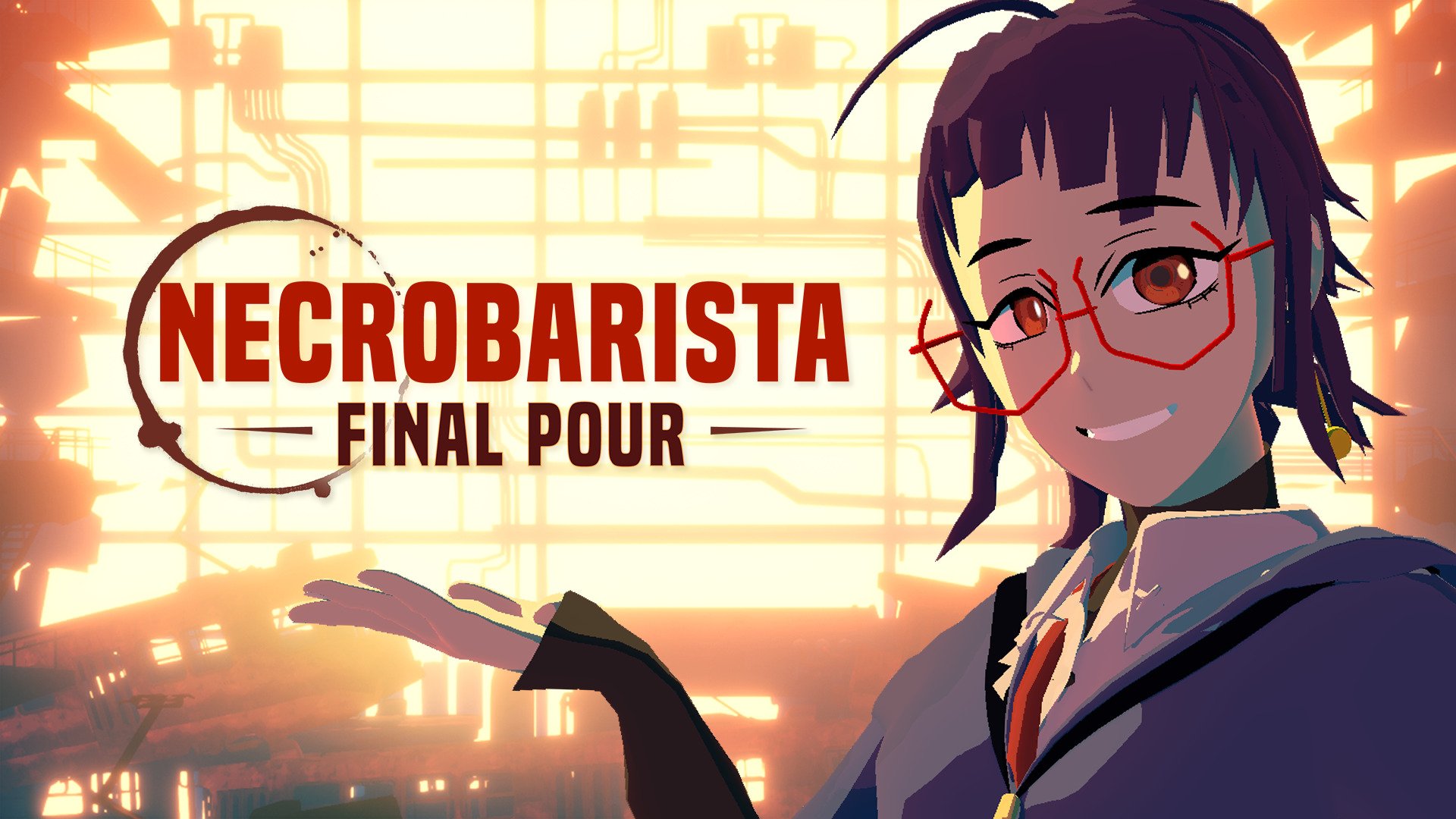 Consider the humble coffee shop. Whether from a major multinational chain, a cart on a busy sidewalk, or a hometown independent roastery, where we go to get our coffee has a major impact on our day-to-day lives. But visiting a café can be much more meaningful than simply satisfying a caffeine craving. Necrobarista: Final Pour, an updated version of last year’s excellent Necrobarista, is out now on Nintendo Switch and is more than just an excellent port; it’s a reminder of the community that the best coffee shops and cafes build over time.

It feels like the Switch is not only the home of endless wonderful indies, but also a repository for an increasing amount of stunning visual novels. Necrobarista: Final Pour is the best of both worlds. A visual novel about the last stop for the deceased on their way to the afterlife, Necrobarista is simultaneously cozy and macabre, funny and heartbreaking. The writing is an undeniable highlight, but the art direction is also extremely striking. Characters have a morbid sense of humor, and comfort is found in the comedy of confronting the inevitable. Final Pour may be largely the same game as the original but there is new content to be mulled over in addition to the same great base game.

After a few chapters, players gain access to a few new key features. Studio Mode is fantastic for those who love Necrobarista‘s distinct style and want to create their own short scenes. Visiting the lovable Kishan lets players essentially create their own animated panels, like the cutscenes in the game. The interface is a little confusing and the Switch’s font size is nearly inscrutable, but after some fiddling, the results are satisfying. Studio Mode, while limited, is a potentially life-changing tool for those interested in game development. It feels like this mode, where players can place in-game assets where they please and choose how they want the camera to be positioned and moved around, is intended as a kind of entry point to game development. While not as robust as many other visual novel development tools, for players who already love the characters and aesthetic of Necrobarista Studio Mode is a welcome feature.

Final Pour also includes additional episodes that weren’t in the original release. These are easily some of the most well-written portions of the game, though they’re largely divorced from the main plot. “Walking to the Sky” is a heartwarming scene of youthful romance, as two wayward teens meet in the Terminal and spend an afternoon together. Far from being being corny or overly sentimental, this optional chapter is sweet and honest. “Devil’s Den” is just as well-written, though entirely different in tone as a recently-murdered Yakuza boss and his employee come to terms with death and what comes next. Both of these episodes are an excuse to spend more time with Final Pour‘s unique sense of style and should not be skipped.

The main story itself reaches incredible heights. But more than just being an interesting story set in a fascinating world, Necrobarista: Final Pour reminds players of how wonderfully healing visiting a coffee shop can be.

In Necrobarista, players learn about the business of The Terminal, a coffee shop in Australia that is more than meets the eye. They meet Maddy, who recently came into a management position, and Chay, a soul who has maybe overstayed his welcome on the mortal plane. The entire cast of characters is charming and well-written, but there is another character, one who never speaks, who is as important as anyone else in the game. The café itself is as distinct and memorable as any virtual space can be. For creative types who miss visiting their favorite haunts, being able to visit the Terminal feels like coming home.

After every chapter of Necrobarista: Final Pour, players have as much time as they like to explore every area of the coffee shop they have unlocked so far. The Terminal is what coffee shop lovers dream about, a multi-story café that serves everything from strong espresso drinks to delicious lamington cakes to aged whisky. There are not only board games, but dartboards and even a pool table. Regulars can park themselves at a counter facing the sea, getting lost in their thoughts as they sip cappuccino, or grab a book off the wall and read about anything at all, including obscure alchemy theories. There is even a co-working space on the second floor with enough outlets for a whole study group.

Simply walking around The Terminal and poking aroung every nook and cranny to find unlockable Memories and read more lore about the world’s NPCs feels like an experience long past. Coffee shops and small restaurants have been disproportionately affected by the COVID-19 pandemic and being able to inhabit a space like the Terminal is wonderful. The Terminal is not only where the recently deceased can adjust to their new nonlife, it’s where regulars go on their way to work or youths go after school when they need to fritter away a few hours. It is a true community space, and one that is joyous to spend time in.

Players can do much worse than to find themselves lost in the Terminal. Necrobarista: Final Pour deftly examines loss and how to deal with it, with striking art direction and music. The additional episodes explore romance from different angles; the tentative, exciting beginnings and explosive, violent endings. At its heart, Necrobarista deals with themes of hope and optimism. Visiting a gorgeous café in a safe, virtual space is a sorely needed escape and a reminder that spaces built to cultivate community are always welcome.