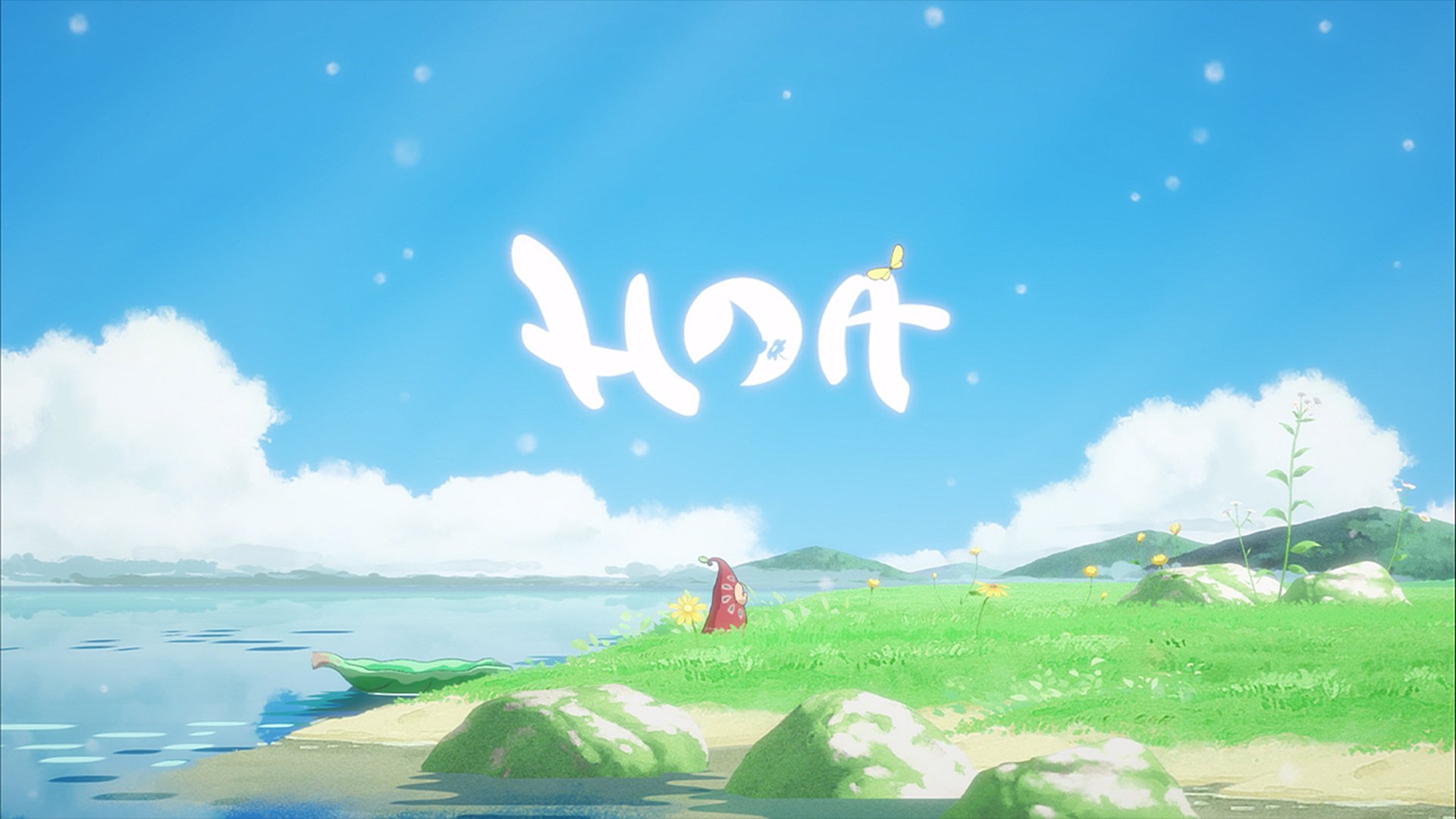 Playing Hoa feels like being embraced in a warm hug. Named after the Vietnamese word for “flower,” Hoa is a breathtakingly beautiful yet disarmingly simple platformer that puts all its emphasis on the experience of playing the game—the blend of graphics, music, and gameplay—rather than the moment-to-moment mechanics. This debut release from Skrollcat Studio may be unabashedly basic, but its elegant design and comforting aesthetic make for a bite-sized dose of playable serenity that cannot be missed.

From its very first moments, Hoa envelops the player in its lush world. The game opens with a pristine open ocean, where a leaf-like boat sails over the glistening waves. As the boat runs ashore, its passenger, a small child shaped like a flower bud named Hoa, sets foot on dry land. The formerly barren landscape starts to spring to life under Hoa’s feet: grass grows, flowers blossom, and wildlife flourishes. Not long after this, players take control of Hoa and guide her on a journey through this vibrant environment, overcoming obstacles and meeting colorful characters to gradually learn more about herself.

This introductory sequence makes a strong first impression: its watercolor visuals are striking and its piano-driven orchestral soundtrack lends an air of majesty to each passing moment. Things only get more artistically ambitious from this point on. From its music to its graphics, Hoa truly is a playable Studio Ghibli film, even more so than other similar games like Ni no Kuni. Between its diverse environments of quiet forests, underwater caverns, and sunny treetops, the game maintains a quick pace of constantly introducing new and equally stunning regions over its roughly three-hour campaign.

Hoa is like a painting on a living canvas, where delicately cel-shaded 3D character models are transposed against active backgrounds that come alive with animals rustling in their habitats, wind blowing through leaves, and rays of sunshine beaming down. Its smooth technical performance makes it easy to get absorbed in the splendor, although routine stutters and abrupt pauses between room transitions and cutscenes do break the immersion. Such minor technical issues are nothing that a patch can’t fix, however, and even if they remain in the game, they are merely small blemishes on an otherwise pristine package.

The story adds another layer of depth to the worldbuilding. Hoa is a deeply narrative-driven game, but it is not necessarily narrative-heavy. You will not find lengthy blocks of expository text or cutscenes conveying high-stakes action here—instead, Hoa takes a much more subtle approach to its plot. The game begins with nary a word of explanation, but as you move forward through its world, you’ll meet a handful of important characters in each region, gain small insights into events that took place before the game begins, and learn new abilities that open paths forward.

Hoa’s storytelling is understated, but each encounter with a new character or discovery of an extra area yields new wrinkles in the player’s understanding of the plot, building up toward a remarkable closing sequence. The story may not be grandly explicit or detailed, but it nonetheless portrays a classic tale of love, growth, and community in nature.

As for the gameplay underlying the narrative and presentation, Hoa keeps things just about as simple as they can get. Perhaps fittingly for such a serene experience, Hoa’s platforming is incredibly low-stakes: there is no health meter or lives system, and there are no dangerous enemies or bottomless chasms that can put your life in jeopardy. Instead, the worst that can happen to your heroic little bud is that you can fall off a platform and have to climb your way back up again, or that an enemy can gently push you back from getting where you want to go.

Most puzzles and platforming challenges boil down to basic exercises in pushing blocks into place or finding ways to reach higher levels. These mechanics may not be especially robust, but they are mixed up with just enough variety to keep things intriguing from start to finish. Some levels will have you platforming on ladybugs, some will see you swimming through deep-sea trenches, and still others will introduce mazes to navigate.

One thing is ultimately clear: Hoa is far from a challenging game. Rather than testing players’ skills, the game is more of a gentle glide. It gives you interesting things to occupy your attention as you breeze through its idyllic landscapes, but it never breaks up the pace with any turbulence or serious obstacles. Instead, although Hoa’s sheer simplicity may turn off anyone looking for something immediately engaging or exciting, its relaxed gameplay loop allows the player to settle into a peaceful rhythm of exploration and wonder at the gorgeous sights on display.

It is in this serene gameplay flow where Hoa is at its best. Artistically stunning in nearly every conceivable way, Hoa makes up for its brief runtime and simple gameplay loop with an abundance of artistic excellence. True to its name, Hoa is a blooming flower that fans of platformers and Studio Ghibli films owe it to themselves to appreciate.