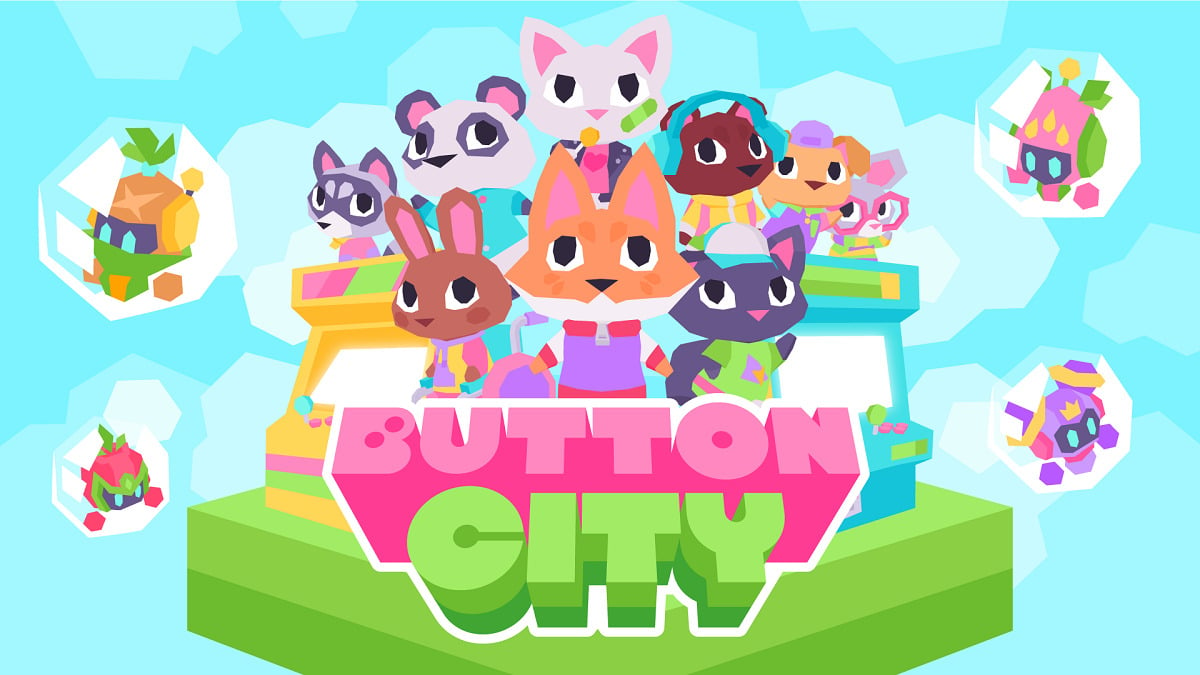 Of all the trends that’ve been running rampant throughout the gaming industry, the wholesome games wave has far and away been the easiest to get behind. Bolstered by a community of like-minded developers and the advent of showcases like the annual Wholesome Direct, the last few years have seen a rise in studios that make coziness and good vibes central pillars of their design philosophies.

Button City falls neatly into this category. It’s a laid-back narrative adventure that’s more concerned with enveloping players in its story and world than focusing on game-feel, à la A Night in the Woods. Though it’s a bit rough around the edges in spots, Subliminal has nonetheless succeeded in delivering on their promise of a pastel, low-poly world bursting with 90’s charm and nostalgia.

Button City is endearing right from the start. A little fox around 10 years old or so named Fennel has just moved to a new town and is without friends or family nearby. One day, he discovers a local arcade and, after exploring a bit, meets a group of hardcore players around his age and quickly becomes part of their crew. All is well until the group suddenly learns of plans to shut down the arcade (the titular Button City) and decide that they must do everything in their power to keep it from happening. Thus begins a series of silly yet adorable schemes and mini-adventures that harken back to the exploits seen in classic Saturday morning cartoons.

Though there’s always this central narrative in the background, the world of in which it takes place is surprisingly open. There are a slew of multi-layered side quests to complete at your leisure in-between main story beats, and these can take you anywhere from a café to a local park to a downtown strip full of shops and secrets to uncover. Nearly every shopkeeper has some type of problem or event they need help with, and though many of these are basic fetch quests, the payoff (be it money or a unique scene/bit of clever dialogue) is always worth it. All of this is easily trackable via a handy quest log that clearly outlines quest progress and completion. Running straight through the main story may take around five hours or so, but making the time to complete every side story and task should add a few more on top of that.

For all there is to do in this low-poly world, though, it’s the games within Button City that steal the spotlight. There are three games available in the arcade and one outside of it, and they’re all fun to play to varying degrees. That said, the star of the show is far and away Gobabots, a 4v4 fruit collection battle where teams have to scour a grid for rapidly-replenishing fruit to carry to the center of the map, all the while avoiding enemy bots. The moment-to-moment gameplay is surprisingly dynamic and diverse thanks to bots having unique weapons and specials depending on their typing, and the short rounds make it easy to fall into the “one more game” trap. With an expanded map selection, some form of progression, and the inclusion of local and online multiplayer, Gobabots could easily be its own standalone title; it’s that fleshed out.

The other two are a basic but serviceable rhythm game and a retro arcade racer, and they’re kept fresh thanks to a great song selection and various buffs and weather effects, respectively, but neither have the depth of Gobabots. As arcade games, though, they all succeed in replicating that simple high score-chasing design philosophy that raked in untold amounts of coins in the 80s and 90s.

All of that said, the quality level of Button City overall is a bit uneven. Whereas it’s clear that a ton of love and care has gone into its low-poly world and characters, navigating that world can be a bit of a chore. Entering buildings can be an exercise in frustration as the game requires a bit of shuffling around and standing a certain distance away before being able to go through an entranceway. This issue is exacerbated significantly while doing side quests (or even portions of main story quests) since they’re so focused on fetching items from one location and bringing them somewhere else. It also doesn’t help that movement in Button City is painfully slow, constricting players to leisurely strolling around instead of giving them the option to run. It’s a baffling design choice that hopefully gets remedied in a patch down the road.

On the whole, Button City is a chill little slice of childhood nostalgia best enjoyed at your leisure. Though this is clearly a more story and character-focused experience, the smaller games hidden within readily make up for the lack of a more traditional gameplay loop. Most importantly, Button City succeeds in being a feel-good story about making friends and going on adventures without losing sight of some of the very real circumstances children face growing up. As a wholesome game, this hits the mark perfectly.