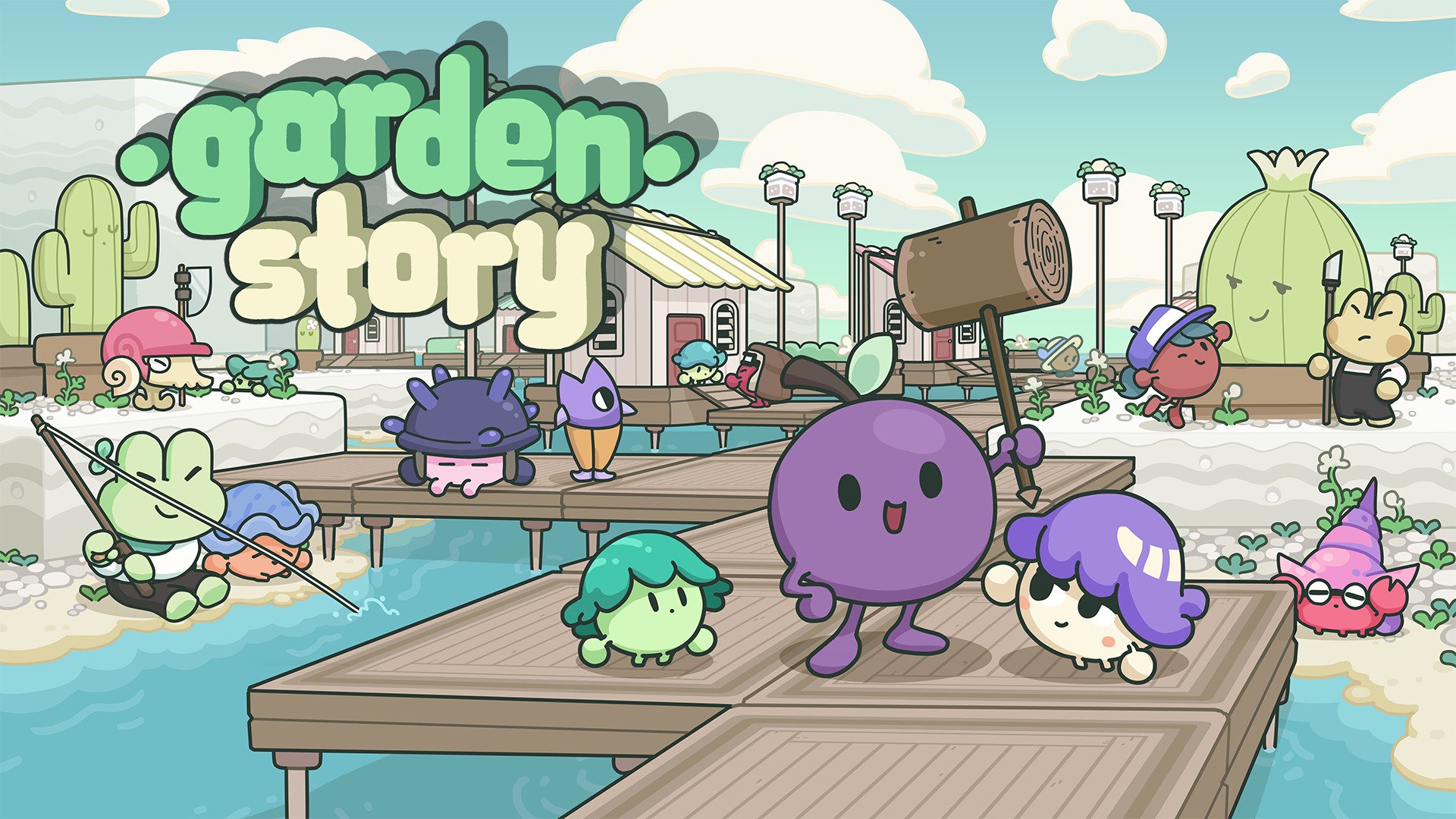 A common lament for anyone who plays games is that there is simply too much to play. How can one find the hours to play the next Xenoblade when a new Zelda just dropped? For a pastime meant to be relaxing, rushing through the latest hundred-plus hour role-playing game just to dive into another is nothing but stressful. But recent indie release Garden Story aims to take some pressure off the player. A low-stakes game that asks the player to move through it at a specific, leisurely pace, Garden Story is a calming, cozy RPG with a strong point of view and a charmingly cute aesthetic. It might just be the game that causes players to slow down, take a look around, and breathe.

Though its immediate release after the recent Indie World Showcase came as a surprise to some, Garden Story has been in the works for years. Anyone who has followed the game is familiar with its adorable aesthetic, where ambulatory talking fruits and vegetables live in harmony with frogs and fish. But Garden Story is more than just a retro-styled Animal Crossing clone. While it shares elements with farming sims, dungeon crawlers, and even Soulslike action games, Garden Story succeeds by being wholly its own thing.

Garden Story begins, as so many role-playing games do, with the player character heeding a call to action. Concord, the hero, is a Greenling, a grape who sprouted from a vine and was given sentience by magical dew. Concord is also a Guardian, a protector of the Grove and one of very few remaining. Having grown up in the safe and friendly environments of the Kindergarden, Concord might not seem like the obvious choice to protect the Grove from the encroaching threat of the Rot. But with the other Guardians perished, missing, or just plain old, Concord must step up to figure out how best to protect the Grove.

Garden Story has a lengthy introduction. Over the course of its first hour, players engage in battle and find items that will aid them in combat; but more importantly, they spend a lot of time simply getting to know the surrounding area. Spring Hamlet is lush, green, and nonthreatening, the perfect place to understand what will consume the bulk of the player’s time. While the combat is frequent and often satisfying, what really ties Garden Story together is its request system.

In every town throughout the Grove, Concord can find a request board. Every morning, a new set of requests are posted for Concord to fulfill or ignore. Requests are broken up into three categories: conflict, maintenance, and forage. Conflict requests ask the players to engage in combat with specific enemies, sometimes during certain parts of the day, while maintenance requests ask Concord to play the handyman, fixing fenceposts, or unclogging a river packed with waterlilies. Forage requests ask the player to put a certain amount of items into a nearby box, which can take mere seconds if the player’s inventory is packed full of scrap, and sometimes much longer if the player is unlucky and can’t find what they need.

Fulfilling requests is the unassuming heart of Garden Story. Though occasionally tedious, these requests work to show that Concord is more than just the defender of the Grove. A guardian’s burden is to foster trust in their community, and helping the inhabitants of the Grove with menial tasks shows that Concord cares. While the Rot is dangerous, a constantly expanding threat on the health of the Grove, the existential threat of a community riven by distrust is also deeply felt. On their quest to stem the growth of the Rot, Concord helps heal the community as well.

There are four main areas in Garden Story, and the flow between each one is similar. Concord comes to each new area to find an individual, like the architect Fuji (an apple) or the aging Guardian Plum (guess) but must spend a few days in that area building trust and learning to wield a new tool or mechanic. After enough requests have been fulfilled and key figures placated, Concord delves into that area’s dungeon for a handful of rudimentary puzzles and a quick boss fight. Victory achieved, it’s off to the next area to do it all over again.

The repetition feels extremely intentional, like an old-school Harvest Moon. Though the Rot is always present in the form of basic enemies sprinkled all over the map, the stakes feel low for the first half of the game. Often, objectives are as simple as “wait until tomorrow”. Certain players will feel compelled to unleash their inner completionist, gathering as many materials as possible by each day’s end to fill out library entries and learn more (surprisingly deep) lore, but there is no obnoxious ticking clock. Garden Story wants players to feel like they always have something to look forward to, and by forcing players to slow down, it succeeds.

That is, in most cases. Garden Story is also a real-time action-RPG, where players must attack, defend, and heal themselves against different types of Rot. There is a stamina bar to manage, and this is where players will either roll their eyes in annoyance or roll up their sleeves in eagerness as they come to grips with timing attacks and waiting for the stamina bar to refill. At first, players can only swing their tools-turned-weapons a handful of times before the stamina bar empties, which can be frustrating. Restoring hit points is simple, as Concord can carry several refillable jars of healing dew. For the first half of the game, combat feels trivial, and in fact, is slow-paced enough to feel tiresome.

Enemy encounters become more interesting in the latter half of the game. Around when the player makes it to Autumn Town, Concord finds more interesting tools to use in and out of battle. New mechanics are folded in throughout, though some, like gardening, are introduced too late to feel useful. Boss fights also escalate in difficulty as the game progresses, requiring Concord to make use of memory slots that bestow different abilities or better stats. Interestingly, Concord cannot increase damage by leveling up. Instead, tools can be upgraded to deal more damage or swing faster. Memory slots make up the rest of customization, as Concord finds statues of former Guardians and fulfills specific requirements to unlock memories. Fulfilling these requirements often requires repeating the same actions over and over again; actions like hitting multiple enemies with the same attack 25 times or running for a total of ten minutes in a certain area.

Combat can also largely be avoided, barring a few dungeons and requests. But learning how to be a great warrior is rewarding. Fighting may be uncomplicated, but that doesn’t mean it feels unsatisfying. The final major encounter in particular is a masterpiece, a perfect pop quiz on lessons learned throughout the rest of Concord’s journey. For a game as laid-back as this, it feels appropriate for combat to take a backseat.

Aside from battles, there is plenty else in Garden Story that satisfies. Adjusting to the pace the game sets might require an attitude shift, but feels right once the gameplay loop hits. But the biggest surprise and greatest pleasure to be found in Garden Story is that it has something deeper on its mind. There is a sense of melancholy that seeps in towards the latter third of this game. As the Age of Guardians comes to close, Concord must reckon with what that means for the future, their own and that of their home. When the chips are down, the plot injects a sense of urgency into the proceedings as a character declares that “unlike our past, we choose to face this problem head-on.”

For a community to truly reconcile with its past, it must look to the future. Concord represents the younger generation of Greenlings, and must come to terms with the inevitability of change. But change does not always mean something negative. Garden Story manages to tell a story about accepting endings as well as beginnings, in a way that feels well-rounded. More than simply wholesome, Garden Story is deeply felt, and invested in the future.