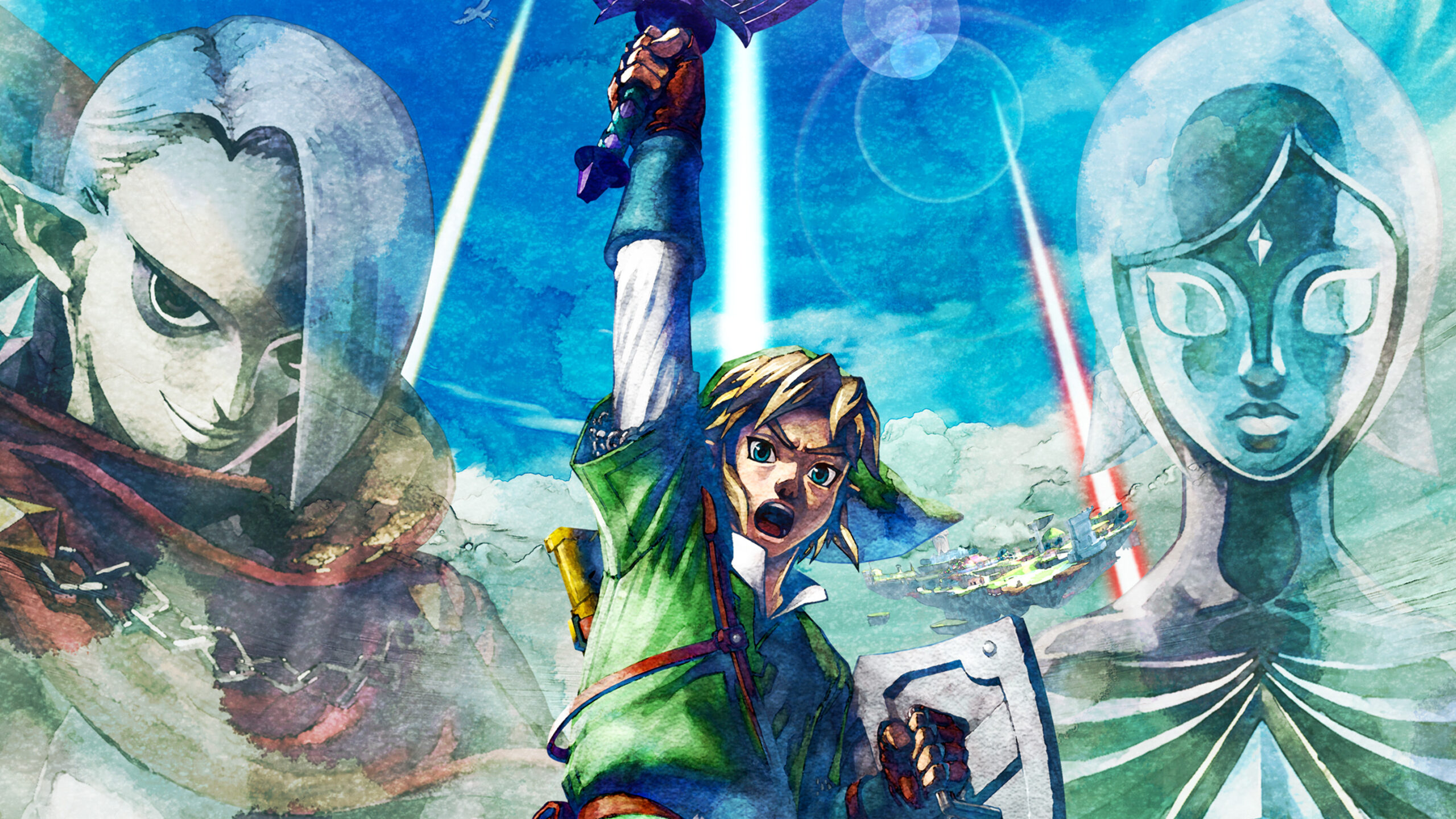 Since it was first released on the Nintendo Wii to celebrate its franchise’s 25th anniversary, The Legend of Zelda: Skyward Sword has been lifted up with sky-high adoration and taken down with grounded criticism. Developed with the goal of perfecting the traditional Zelda formula and refining its combat with the power of the Wii’s motion controls, it debuted to fawning reviews and record-setting sales. However, it was not long before its reputation began to take a nosedive as fans levied harsh yet valid criticisms at the title: its strictly linear structure alienated players used to more open-ended adventures, its never-ending tutorials tested players’ patience, and even its signature motion controls could feel more irritating than immersive.

Nearly ten years later, Skyward Sword HD on Nintendo Switch flips these criticisms on their heads. This high-definition remaster doesn’t add much by way of all-new content; rather, it introduces a slate of subtle enhancements and improvements that may not sound like much on their own, but add up to make an enormous impact on the core gameplay experience. Between streamlined tutorials, a freely controllable camera, and all-new control schemes, Skyward Sword HD’s minute tweaks dramatically alleviate the tedium that plagued the original release, leaving it free to soar confidently once again. This former Wii exclusive may not be a watershed moment for the Zelda franchise like its successor, Breath of the Wild, but the HD version’s enhancements let it shine for the classic that it is: a beautifully told tale set in a lovingly realized world.

Going Through the Motions

Out of all the major additions included in the Switch version of the game, perhaps none is more immediately notable than the inclusion of button-based controls alongside the existing motion controls. In the original game, everything from fighting enemies to selecting a save file required physically swinging your Wii remote; now, players can complete these actions using the Switch’s buttons and thumbsticks. While Skyward Sword HD still supports motion controls akin to the original release via detached joy-cons, the inclusion of new control methods presents a remarkably seamless solution for the game’s controversial original scheme.

Using the right stick to raise your sword or clicking the left stick to raise your shield may not be as immediately intuitive as swinging the Wii remote and nunchuck, but after taking the time to get used to it, playing the game with the buttons offers a refreshing alternative to the sometimes unwieldy motion controls. There are even some unique perks to using the button controls over the motion options: the buttons and thumbsticks provide greater precision than waggling a Wiimote, making everything from engaging in combat to navigating the menus feel smoother.

Much less flashy than the all-new control scheme, however, are a handful of tweaks that perhaps leave the most substantial mark on the game. After the original release pestered players with an endless barrage of info dumps overexplaining the smallest facets of the game, Skyward Sword HD provides the ability to speed through or outright skip many tutorials, dialogue sequences, and cutscenes. No longer does your spiritual companion Fi always jump out of your sword to explain your current objective or does the game stop in its tracks to describe a red rupee each time you pick one up. Instead, players can zoom through text with a tap of the B button, and most importantly, Fi’s advice has been made largely optional, such that she only leaves your sword when you explicitly ask her to.

Simple tweaks like these make a seismic difference in the moment-to-moment gameplay loop. Without having to suffer through unwieldy motion controls or endure relentless handholding, the game enjoys a dramatically brisker pace that makes it easier to enjoy the memorable characters or beguiling puzzles encountered during the adventure. The button controls may not be the most elegant scheme ever created and the structure may still be remarkably linear overall, but these quality-of-life enhancements streamline the gameplay experience to accentuate everything that Skyward Sword has always done right: the story, characters, and level design.

The Beginning of the Legend

While Skyward Sword proved controversial almost as soon as it was released, even its most fervent detractors typically agree on one thing: it tells one of the finest tales in the storied franchise. No other Zelda title can match the emotional resonance and poignancy achieved throughout Skyward Sword’s 30-hour epic. Set in the airborne world of Skyloft, where humans live on levitating islands above a sea of clouds and ride massive birds called Loftwings, the story opens by vividly portraying the relationship of Skyloft Knight Academy student Link and his childhood friend Zelda. Following the onset of a sudden disaster, Link sets out on a quest through an unfamiliar world to try and reunite with Zelda and, in the process, uncover the truths of ancient prophecies.

Taking place at the start of the Zelda timeline, Skyward Sword’s main campaign boasts world-ending stakes like any other title in the series while also revealing many tantalizing details about the Zelda mythos. However, it is the characters populating this tale that make it so impactful. Players get to see Link and Zelda’s deep childhood friendship play out in real-time in the game’s opening hours, such that when calamity strikes, setting out to save Zelda doesn’t just feel like a heroic obligation–rather, it’s a believable act of friendship. Even the many other characters in the tale, from fan-favorite companions like the bumbling Groose to the overeager bazaar vendor Rupin, come alive with unique backstories, sidequests, and routines. Driven by believable emotion and enhanced by stakes that rise ever higher, Skyward Sword tells a simultaneously relatable and fantastical story.

The world itself plays a large part in making the experience so vivid. Split between the civilized floating islands of Skyloft and the wild unsettled regions of the Surface below it, this primeval vision of Hyrule feels remarkably well-realized. Each one of the three major regions of the surface world comes to life with its own local inhabitants, cultures, and histories, making it a delight to slowly unravel the mysteries contained within. Whether you view it as a repository of Zelda mythology revealing the ultimate origins of the series, or as a character-driven tale of romance and heroism, Skyward Sword delivers the series’ richest and most rewarding narrative.

As undoubtedly brilliant as the worldbuilding, character development, and storytelling of Skyward Sword can be, it is in its gameplay experience where the game reaches its highest highs and lowest lows. Perhaps because of its strong narrative focus, Skyward Sword is also one of the most linear titles in the Zelda series–a characteristic that can be either its greatest selling point or its worst issue, depending on what you hope to get from the game.

In this isolated world of empty skies and harsh wildernesses, there are no vast Hyrule fields to explore or wide-open areas to discover. Instead, players will spend much of their time being shuffled from Point A to B with little room for exploration or experimentation along the way. Most regions in the game are designed compactly with little wiggle room, an issue worsened by the fact that the campaign often revolves around repetition, sending players back to the same regions over and over again. This structure was divisive enough in 2011, and little has been done to change it directly in Skyward Sword HD. For contemporary players used to Breath of the Wild’s revolutionary freeform structure, visiting Skyloft in 2021 may feel like an unwelcome culture shock.

Despite the unwavering linearity, Skyward Sword still delivers countless highlights throughout its campaign. In many ways, it represents a peak of traditional Zelda game design: its dungeons are among the most creative in the series, its arsenal of usable items is vast and unique, and its puzzles are consistently clever. From regions that alternate between timelines to a dungeon that shifts between planes of existence altogether, Skyward Sword remains the pinnacle of the series when it comes to puzzles in its dungeons and overworld alike. The combat can be a highlight in itself, as the campaign pits players against some of the most memorable bosses and enemies in the series. Although exploring Hyrule may sometimes devolve into a collection of repetitious corridors, the variety of puzzles, gimmicks, and combat scenarios contained within them turns the game into a shining celebration of the series’ delicate balance between tense action and inventive puzzles.

While Skyward Sword HD makes no direct changes to the core content of the game, its quality-of-life improvements go a long way to make the linearity more palatable than ever. Without unwanted tutorials, unskippable dialogue boxes, and unreliable motion controls blocking your progress, the adventure moves along at a smoother pace with fewer obstacles preventing you from getting to the highlights of the dungeons, puzzles, and enemies. There may be no avoiding the game’s linear progression altogether, but players willing to forego freedom and exploration will discover that Skyward Sword HD encapsulates much of what makes old-school Zelda design philosophy so brilliant in the first place.

Tying the whole experience together is its audiovisual presentation. Although the Wii was no graphical powerhouse, Skyward Sword still set itself apart with a uniquely beautiful graphical style that looked like a playable watercolor painting, immediately whimsical yet still somber when necessary. This HD version leaves the artistic direction intact and polishes up the rough edges from the original edition, resulting in a brighter, smoother, and clearer game than ever before. In addition, Skyward Sword also boasted the series’ first orchestrated soundtrack, which remains just as majestic as ever. The Ballad of the Goddess is a rousing call to adventure, while the sweeping arrangements that accompany you as you soar through the sky or more understated rhythms that complement dungeon exploration make every scene come alive that much more.

Upon its initial release, Skyward Sword was an imperfect classic held back by a bevy of confusing design decisions that sullied its otherwise pristine creative vision and solid design. Now, the Switch version lets the game shine for all its worth. The new inclusions like revamped controls and tutorials dramatically streamline the experience, and with less baggage weighing it down, everything that makes the game so special can shine through.

Skyward Sword HD’s emotionally charged and poignant tale hits home without compromise and its commitment to the traditional Zelda formula makes this a perfect inclusion to the Switch’s Zelda library, complementing the reckless innovation of Breath of the Wild with its own confident conservatism. Meanwhile, its dungeons and puzzles represent some of the finest challenges that the series has to offer. Whether you’ve been flying with your Loftwing for a decade or you’re just now ready to take flight, there’s no better point of departure than Skyward Sword HD.