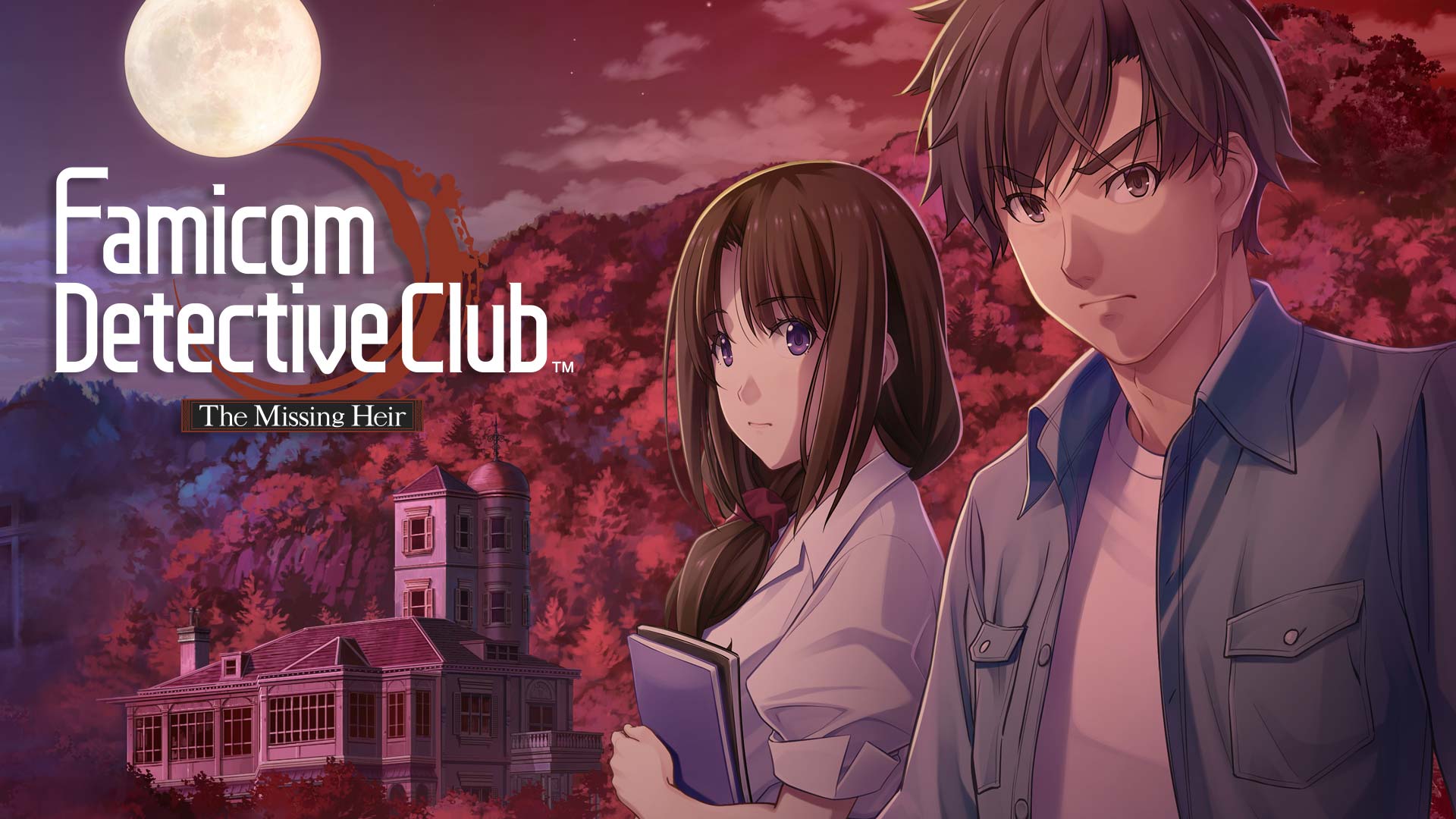 Over the last couple of years, Nintendo has ever so slowly been opening a backdoor towards their catalog of fan-favorite titles that were never localized outside of Japan. From Earthbound Beginnings and The Mysterious Murasame Castle appearing on last-generation systems to Fire Emblem 30th Anniversary Edition and Mario’s Super Picross being made available on Switch, foreign cult classics of Nintendo’s history have been making their way to the West over time thanks to the company’s digital storefronts and online services. After over thirty years since their debut in Japan, it was only a matter of time before Nintendo’s first step into the realm of murder-mystery visual novels would unexpectedly rise afoot again for audiences on a global scale. Famicom Detective Club: The Missing Heir and The Girl Who Stands Behind are back and better than ever as the pair of point-and-click style adventures are finally being given a chance to shine with fancy new remakes.

Its sequel might be more cinematic and technically impressive than its debut entry, but the first game in the Famicom Detective Club series is legitimate evidence of how barely any enhancements are required to make a solid title from 1988 all the more enjoyable than its already admirable 8-bit counterpart. It is always a spectacle how well Nintendo’s hits from the 8-bit era of gaming have held up. Famicom Detective Club: The Missing Heir is quite literally a near one-to-one remake of the original Famicom Disk System game, yet it fits rather excellently into its modern landscape of competitors. The pixelated visuals and simple user interface that initially took up a large portion of the screen have been updated for a more engaging modern experience. Now packed with colorful hand-drawn characters and backgrounds along with menus that transparently tide over the gorgeous art, the remake is exactly what you would expect from a recently released interpretation of the game as it makes simple accessibility changes and adds a full-blown Japanese dub to its presentation.

The Missing Heir was the first entry to ever be released in the Famicom Detective Club series, but chronologically it is actually the second title. The Missing Heir takes place two years after the nameless protagonist you helm becomes a detective assistant at the Utsugi Detective Agency in The Girl Who Stands Behind. While both titles are releasing simultaneously on Switch, due to the way each game’s narrative plays out there is no reason not to play the one whose story simply interests you more first. Players who decided to venture through The Missing Heir will find themselves with a unique introduction to the series’ two main detectives as it flaunts a vastly different narrative focused on the male hero. With that said, upon waking up after supposedly “falling” off an ocean cliff in the Japanese countryside, the player comes to consciousness with a case of amnesia and a mystery they had been hired to work on that has to be solved from scratch.

As the protagonist attempts to discover how exactly he lost his memory and who is the murderer of the Ayashiro family’s deceased elderly member, the player will have to investigate areas connected to the crime for evidence all while conducting their own interrogations. The Missing Heir’s story quickly becomes an intricate game of catchup and discovery as the player does not know who to trust, what they previously uncovered, or where the culprit may strike next. To help the player on their quest to unveil the past is a young female detective named Ayumi Tachibana. Ayumi will not only provide useful information related to the case discovered on her own time, but she will help the player speculate where the mystery could be heading as they collect their thoughts at the end of each chapter.

Like most other point-and-click adventure games, the gameplay of Famicom Detective Club: The Missing Heir holds up rather well as it solely relies on your sleuthing skills through a minimalistic command menu. It is certainly not close to being as complex as other modern detective visual novels, but its reminiscent style of simplicity is still wholeheartedly enjoyable as it presents a tale that is a relaxing entry point for its genre yet always lurking with meticulous challenge. The gameplay at first glance may seem complicated, however, it does indeed follow a linear structure — this is a faithful remake of a game from 1988 after all. Typically how the gameplay works is that the player must figure out an order of commands to use to gain more information. By asking the right questions and discovering vital information, the player can move on to the next scene.

The game’s command menu consists of four basic interactive abilities. By using the “Talk” command, players can question individuals they are speaking to about a select few subjects while “Call/Engage” lets them swap between interacting with other characters on the scene. “Take” will occasionally let players pick up an item, but more importantly “Look/Examine” is used for identifying distant objects, locations, or people and their emotions. Finally “Remember” is a command that can only be used at specific moments when the protagonist is able to recover a thought from his past related to the problem at hand. Additionally “Quit Investigation” is just a means of performing a quick save on one of three save file slots at any time. The four core functions are tremendously manageable to multi-task at all times as they are what players will only be using outside of the later chapters when they may have to manually input answers to a deduction (something that is brilliant but I will not spoil here for the sake of the reader’s enjoyment).

The one new addition to the gameplay that was not included in the initial release of Famicom Detective Club: The Missing Heir is the notepad feature that originated from the sequel title’s 1998 remake for the Super Famicom. This long list of characters and their connections to the current point in the narrative is located on the pause screen. It might be accessible at all times, but its practicality is rather questionable. While it may initially come off as extremely useful, the function feels rarely needed and underutilized. If you are taking a break from the title after a long period of time and are coming back fresh in hopes of finishing the story, it is definitely worth a gander at the very least to reaccustom one’s self with the characters. Due to the amount of time you spend with each victim, suspect, and passerby, however, if you are dedicating a couple sittings to finishing the entire game then this feature will surely go either unused or unnoticed.

The only time where the point-and-click mechanics of the game can get confusing is when you have to talk to an individual multiple times — or rather, the player must utilize the same questions more than once. The Missing Heir gives players no indication in various situations that they are supposed to continue resorting to the same questions to get more information. Since the beginning of the game teaches you to go down a list of commands once, it further reinforces players to never ask twice. It is a win-lose situation in game design, but it certainly adds a peculiar aspect to being a detective. On one hand, not knowing that you are supposed to ask the same questions again puts you in line with the skills of a great detective affirmed to find answers. On the other hand, many of the situations where you are supposed to ask the same question again are rough to determine since the dialogue typically plays out as if the character is finished speaking on the matter.

Even with these minor gameplay flaws though, what is most important for The Missing Heir is telling an excellent mystery — and it surely does that. Like all other good detective tales and mystery visual novels, the first entry in the Famicom Detective Club series takes plenty of twists and turns as players will continue to make reasonable hypotheses about what is going on only to be thrown off by new details. The narrative is chock full of cheeky moments and clever elements that will provide players with an equal number of exhilarating “ah-ha” and “I knew it” moments. Every character introduced to the story shares an equal contribution to the narrative. No one ever comes off as annoying or time-wasting as they provide important details the player will eventually have to utilize. The Missing Heir is evidently reminiscent of a simpler time, but that never stops it from losing steam or falling short on the promise of a satisfying case to crack.

Looking back on its original Famicom Disk System counterpart, the remake of Famicom Detective Club: The Missing Heir may not add anything new to its original case, but it is no surprise why the murder mystery visual novel from Nintendo became a cult classic in Japan. As it helms a fascinating mystery to crack and a cast of characters it confidently utilizes, The Missing Heir is an excellent entry point into the Famicom Detective Club Series and plainly a solid linear detective game from the past. Perhaps its decision-making process can sometimes be quite cumbersome, but for the most part, The Missing Heir is constantly making breakthroughs as the story continually becomes ever so more fascinating to both watch and interact with. Outside of simply having more interest in its partner title, there is no reason not to pick up Famicom Detective Club: The Missing Heir if you are interested in another tale from its diligent genre space. In an age where Nintendo has embraced more story-driven content, hopefully sleuthing audiences will be able to persuade the company in the future to continue making more entries in this gem of a franchise.