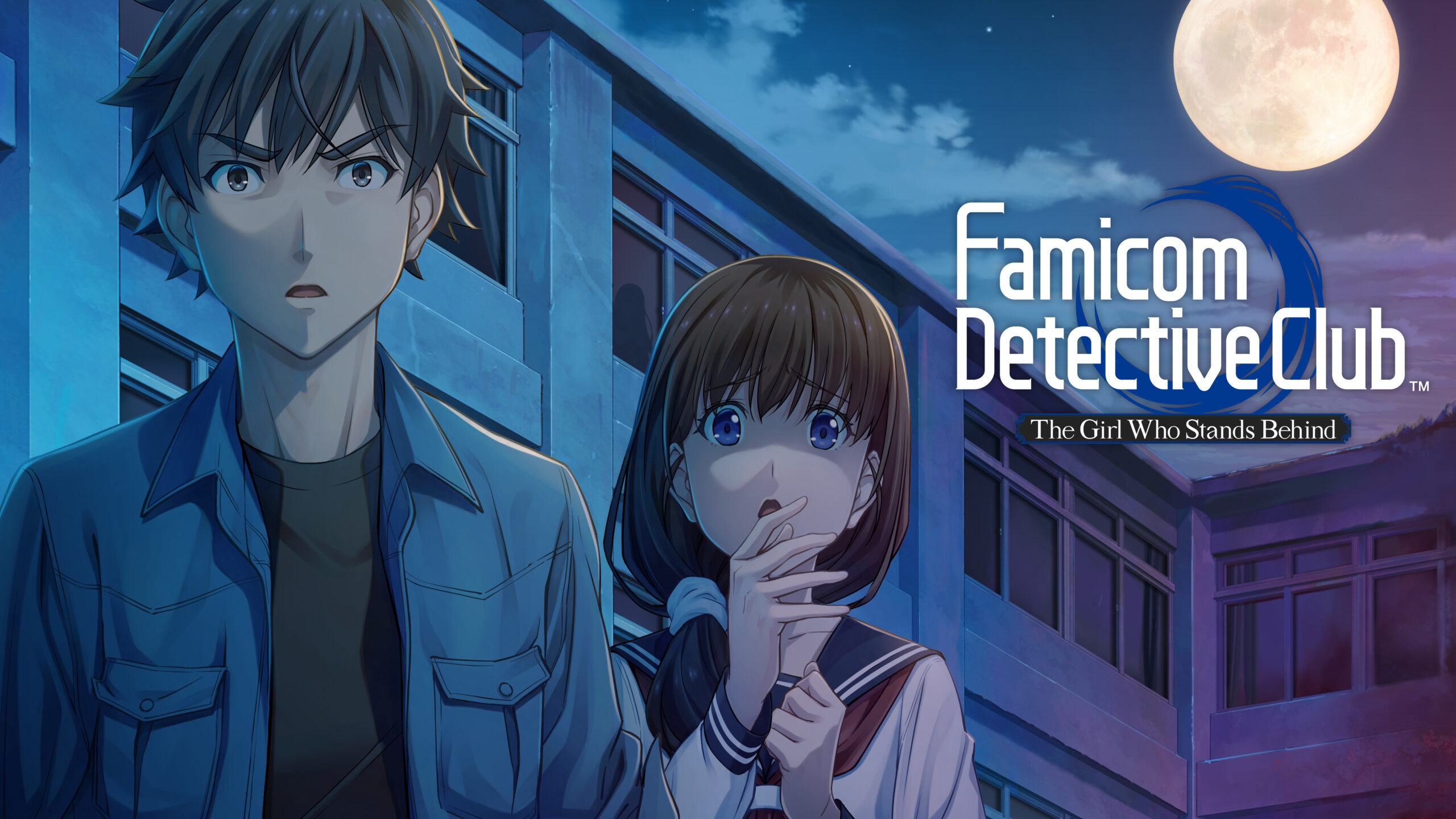 Famicom Detective Club: The Girl Who Stands Behind Review

Famicom Detective Club: The Girl Who Stands Behind holds a fascinating place in the Nintendo pantheon. First released on the Famicom Disk System in 1989 as a prequel to 1988’s The Missing Heir, this murder mystery visual novel has long languished in Japanese exclusivity. It might be regarded as a cult classic in its homeland, but for years, the Famicom Detective Club series has earned only the slightest notoriety abroad thanks to the occasional spotlight as a Smash Bros. trophy. Yet now, at long last, Nintendo has partnered with Mages to give this eclectic adventure the remake treatment with a fresh coat of HD paint and let it have a grand debut in the West.

The Famicom Detective Club series is more than just a quaint novelty from Nintendo’s ancient software library. Rather, if you’ve enjoyed games like the Ace Attorney series or any other visual novels or adventure games on Switch, then The Girl Who Stands Behind is nothing short of a forgotten classic you owe yourself to play. Its narrative is equally convoluted and compelling as any good mystery should be, with even a touch of the supernatural to set the game apart from its predecessor. Its seamless blend of detective drama and Japanese horror is an impressive feat for a modern title and a downright accomplishment for a game released more than 30 years ago. Add that solid foundation to a remarkably well-executed remake with gorgeous new graphics and audio, and this package is deserving of any mystery fan’s attention.

Famicom Detective Club: The Girl Who Stands Behind may be the second title in the series, but it is an entirely standalone story that can easily be enjoyed without playing its predecessor. The case begins with a young assistant detective who ends up getting assigned to solve the murder of a strangled high school student whose body washes up from a river one day. As the investigation leads back to the student’s school, you quickly begin making connections between the student’s murder and the school’s urban legend of the eponymous “Girl Who Stands Behind,” a bloody ghost rumored to haunt the halls of the school. With the help of the victim’s best friend (and the series’ unofficial mascot), Ayumi Tachibana, the hunt begins to unravel the dark truth behind the murder.

Like any good mystery, The Girl Who Stands Behind is as convoluted as it is compelling. What starts as a relatively simple tale of a murdered high school student grows into a grand supernatural conspiracy, where any suspect could potentially be the murderer. Even if some conclusions might feel predictable from the outset, the way that the game arrives at them is nothing short of ingenious. It keeps the player guessing as it gradually teases out more information about each incident, about each character’s backstory, and about the motives that any suspect might have. Its narrative often delves into surprisingly dark territory, and it doesn’t shy away from getting creepy as the ghostly girl of legend becomes more and more prominent. Sometimes the plot can feel like a slow burn as it lays the groundwork for character backgrounds and motivations, but the payoff is always worth it with several breathtaking and exhilarating set pieces.

In many ways, The Girl Who Stands Behind feels remarkably modern in its depiction of high school intrigue and supernatural drama. Its seven-hour runtime is packed with surprising developments and complications that make it enthralling from start to finish, even if there are a few lulls along the way.The game has a huge cast of characters spanning a range of narrative tropes and personalities, and although there are more than a few red herrings among them, the way that the narrative eventually ties every individual together into a grander connection to unveil the shocking truth is supremely satisfying, especially in the second half of the game.

Famicom Detective Club: The Girl Who Stands Behind thrives in building suspense and encouraging players to pry as much information as possible from every character and every environment. Its gameplay is similar to any other title in the point-and-click adventure genre, letting you pick a range of simple commands from a menu sidebar to interrogate suspects and investigate your surroundings. Along with that, there are the occasional point-and-click segments that allow you to get more interactive with your surroundings, observing any oddities or quirks that might be hiding nearby. The gameplay is simple, effective, and in general, highly linear — there’s not much by way of flexibility in the gameplay, which shouldn’t come as a shock considering the game’s age. If you’re ever in doubt about how to proceed during any scenario, simply exhaustively select every dialogue and interactivity option until something clicks and unlocks a new path forward. It might sound basic, but for its time, the gameplay loop generally holds up well.

There are times, however, where the gameplay does show its age. Finding out what to do next to maintain progression is rarely as difficult as ascertaining how the game wants you to do so. The game can tend to feel highly arbitrary with its progression, requiring you to perform a specific sequence of actions before allowing forward progress. For example, at one point in my playthrough it was obvious that I needed to bring a character to another room for privacy, but rather than letting me simply talk to the character about my intentions, I had to go to the other room myself and then select the “think” command to summon them to me. Such situations aren’t too prevalent throughout the game, but they can nonetheless slow down the pace and frustrate modern players who might expect some more flexibility.

This remake posed the ideal opportunity to tweak these systems a bit for the current generation of players, but for better and for worse, the game remains largely untouched. However, these issues are more minor than anything and insignificant compared to the larger package. If you’re expecting the level of variety and intrigue on the level of a modern visual novel or adventure game, you won’t find that here. Instead, the narrative carries most of the experience — and considering how elaborate the mystery already is in its own right, that is far from a bad thing.

Not only does Famicom Detective Club: The Girl Who Stands Behind come to the west for the first time with a high-quality localization, but it’s also been giving the specialty treatment with a beautiful remake. This modern version of the game features lovingly redrawn character portraits complete with fluid animations not often seen in visual novels, as well as an all-new Japanese audio dub and a vibrant re-orchestrated soundtrack. It’s a high-budget remake that raises tantalizing ideas about future possibilities for Nintendo-endorsed visual novels, even if such an occasion seems unlikely at best. The only thing lacking in this remake is the ability to switch between the new and old versions of the game — since the remake’s changes are almost exclusively aesthetic, it would have been much appreciated to be able to compare the modern HD edition with its Famicom original. As it is, the game is nonetheless a worthy package of a cult classic that finally lets it have its time to shine globally.

Bold and inventive even today, Famicom Detective Club: The Girl Who Stands Behind masterfully blends traditional murder mystery plot points with traces of horror to create a uniquely compelling case that is a delight to crack for the first time in the West. Perhaps its gameplay may feel archaic from a modern perspective, but the undeniable ambition of its narrative high points makes up for any low points encountered along the way. Nintendo has thankfully begun embracing the weirder entries in its development catalog, and with this remake, Western players can enjoy the best possible way to experience this cult classic. The Missing Heir may seem like the logical first choice for jumping into the series, but with a greater level of cinematic quality as well as some ghostly drama, The Girl Who Stands Behind weaves a uniquely compelling tale. Regardless of which title you choose to start with, there’s no better time than the present to join this club.